It’s been a great week thus far (and it’s only Wednesday) for the 2019 ToB, with the Green Jersey (for the overall leader of the race), swapping and changing.

Facebook was busy with some vague plans for some who were interested to go and watch somewhere. I had plans just to cycle out to the Yeld and watch from there and grab a couple of shots.

This plan somewhat expanded as it was just fortunate that I had planned to be in Newcastle on Sunday 8th for the Great North Run. So, the plan hatched to take a couple more days off work and go and see the event in Newcastle and Gateshead, and maybe grab a view on the way home as well.

A thrilling day transpired on Monday, with a superb finish from Dylan Groenewegen up the long drag of Grey Street in the city centre. Matteo Trentin fighting also to maintain his lead. 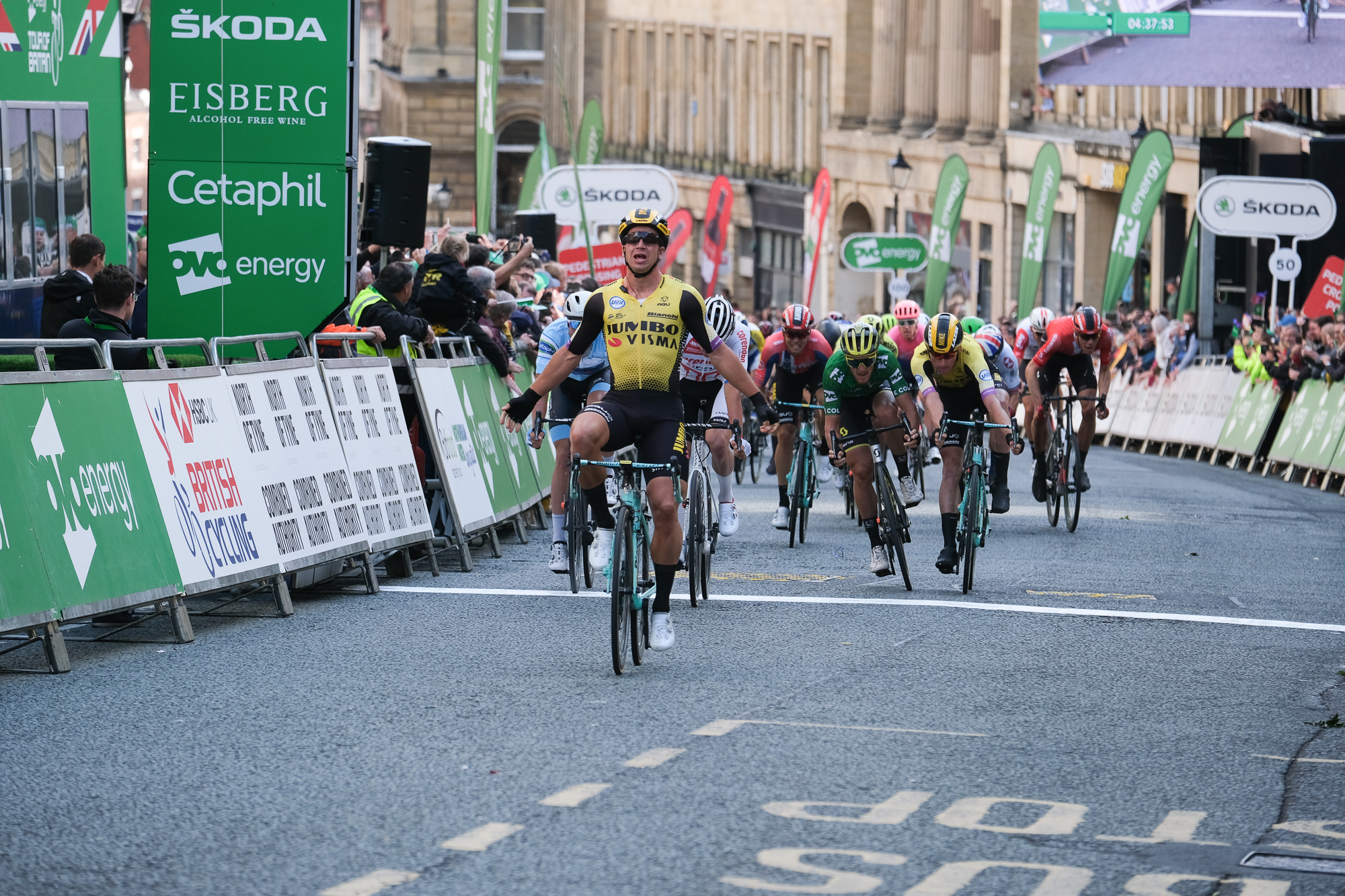 The sprint and ease that the winner seemed to have in pulling up the hill and taking a 2 bike gap to the line. 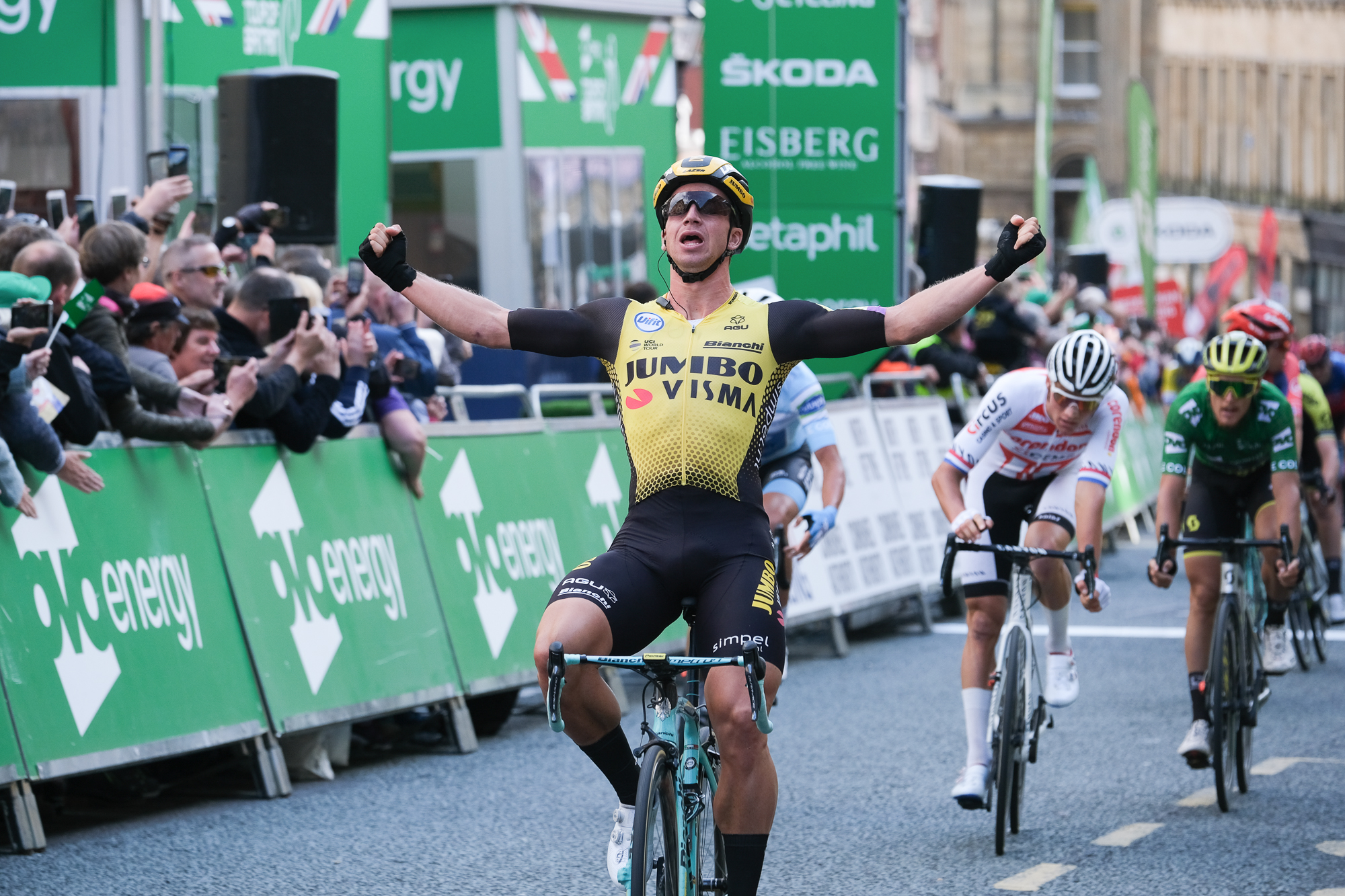 The day after saw the riders in Gateshead for the start. 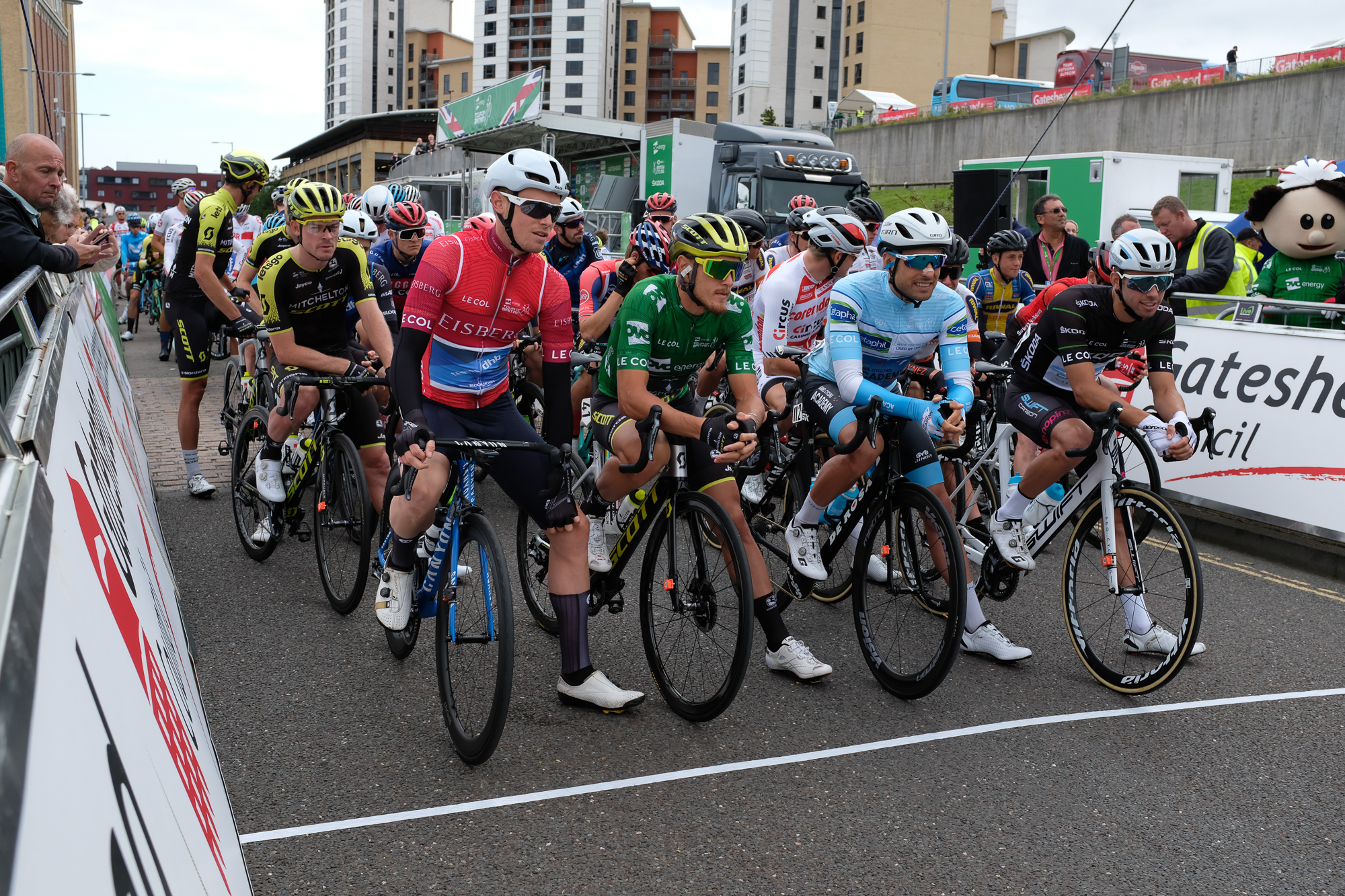 After the start getting away, I left for home, but hoped to grab the Tour on the way if I could drive fast enough to catch them!

Luckily, I managed to get a few metres from where the riders were due in 20 minutes from me stopping, so I hopped out and waited near the sign from Kirby Stephen for them to exit onto the main road. 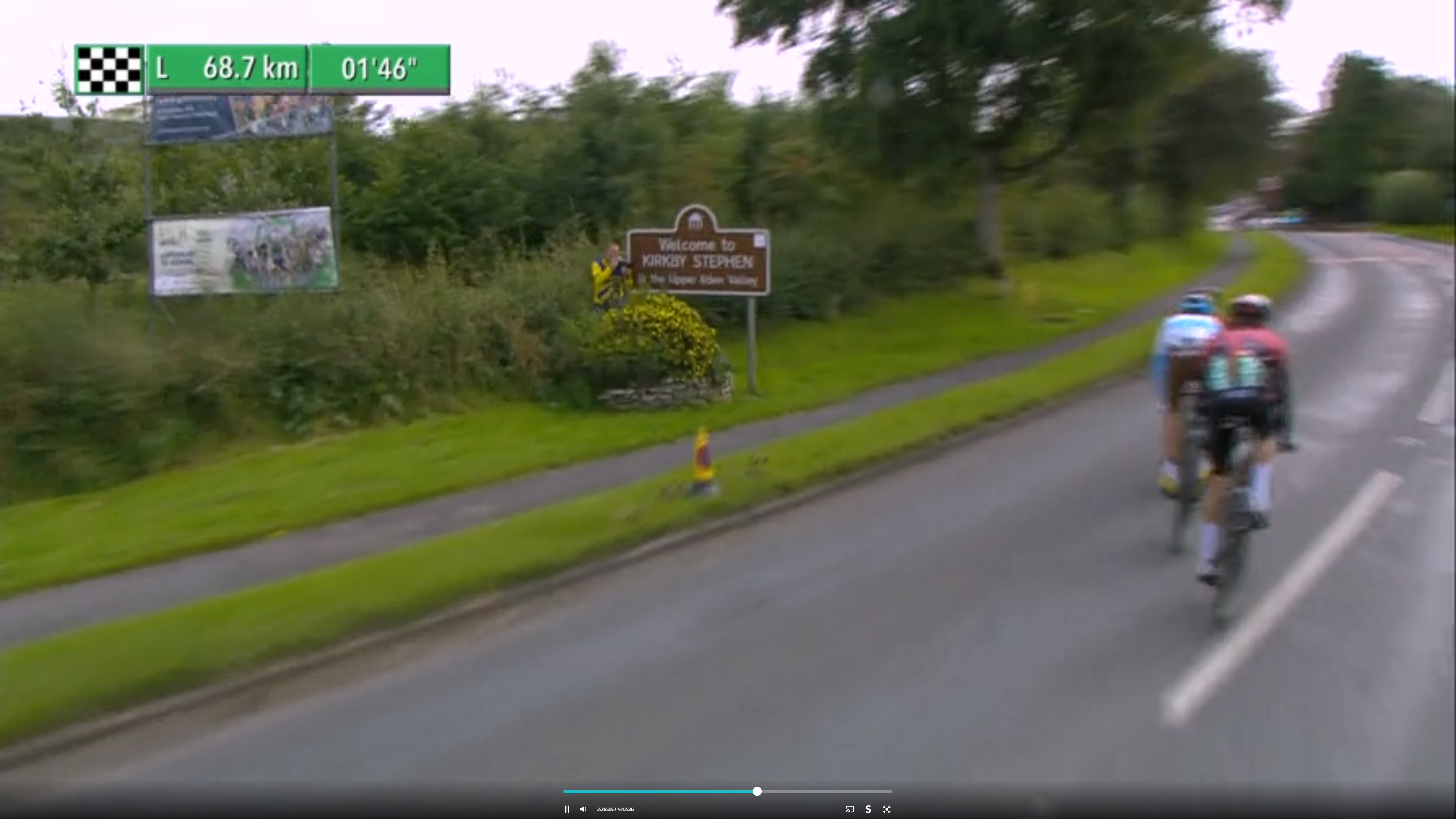 That sneaky looking guy hiding next to the sign is me… 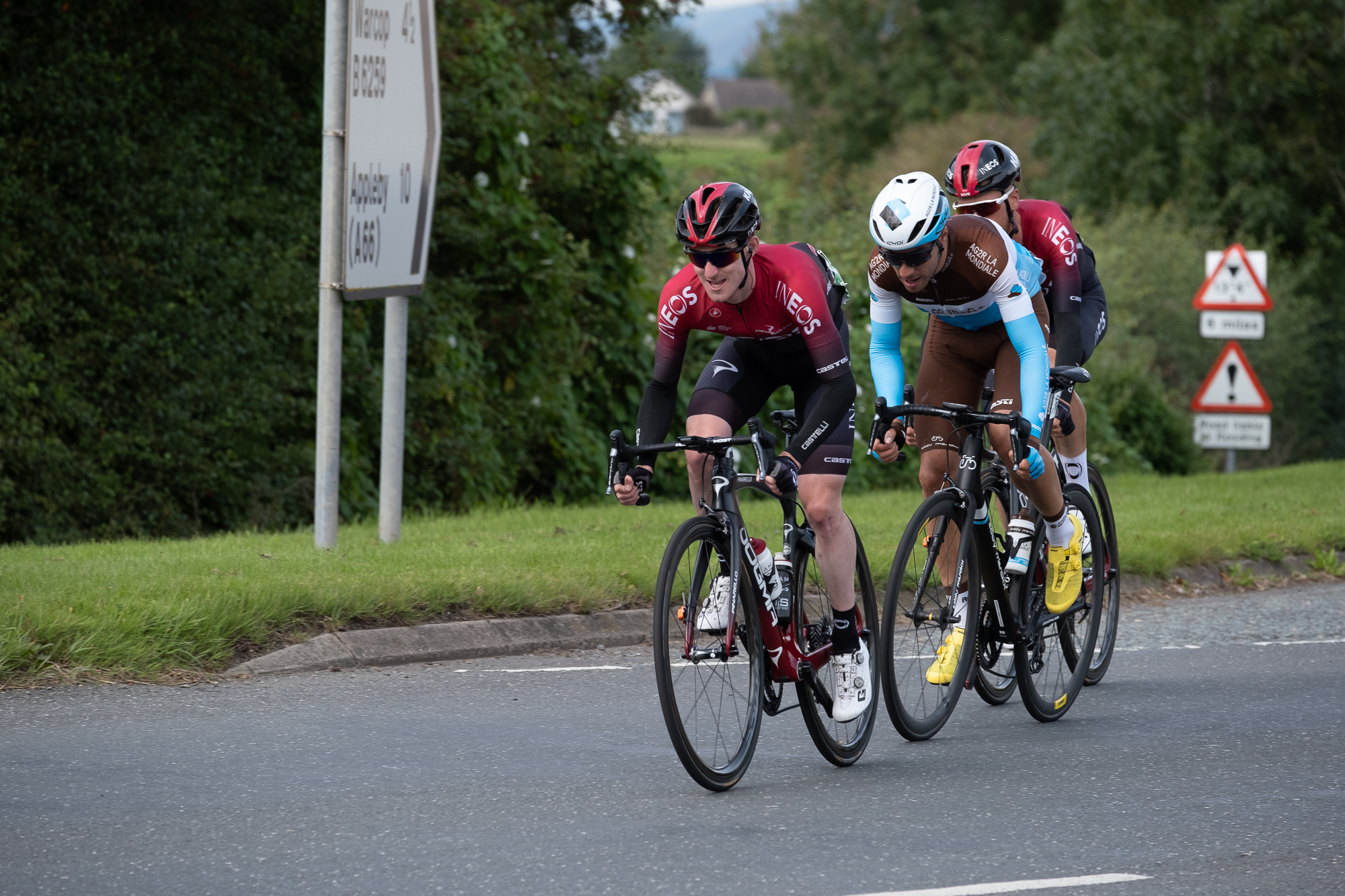 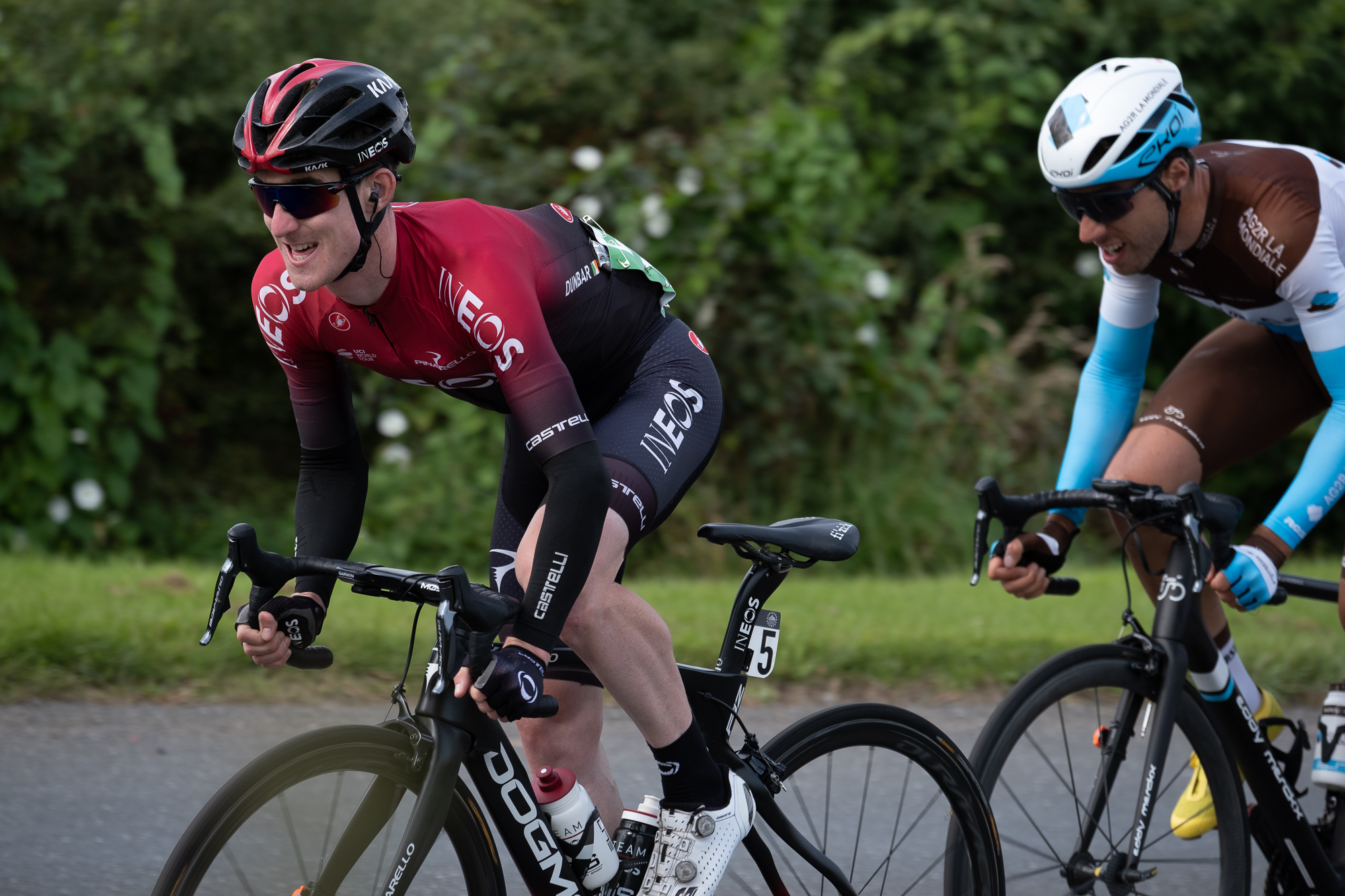 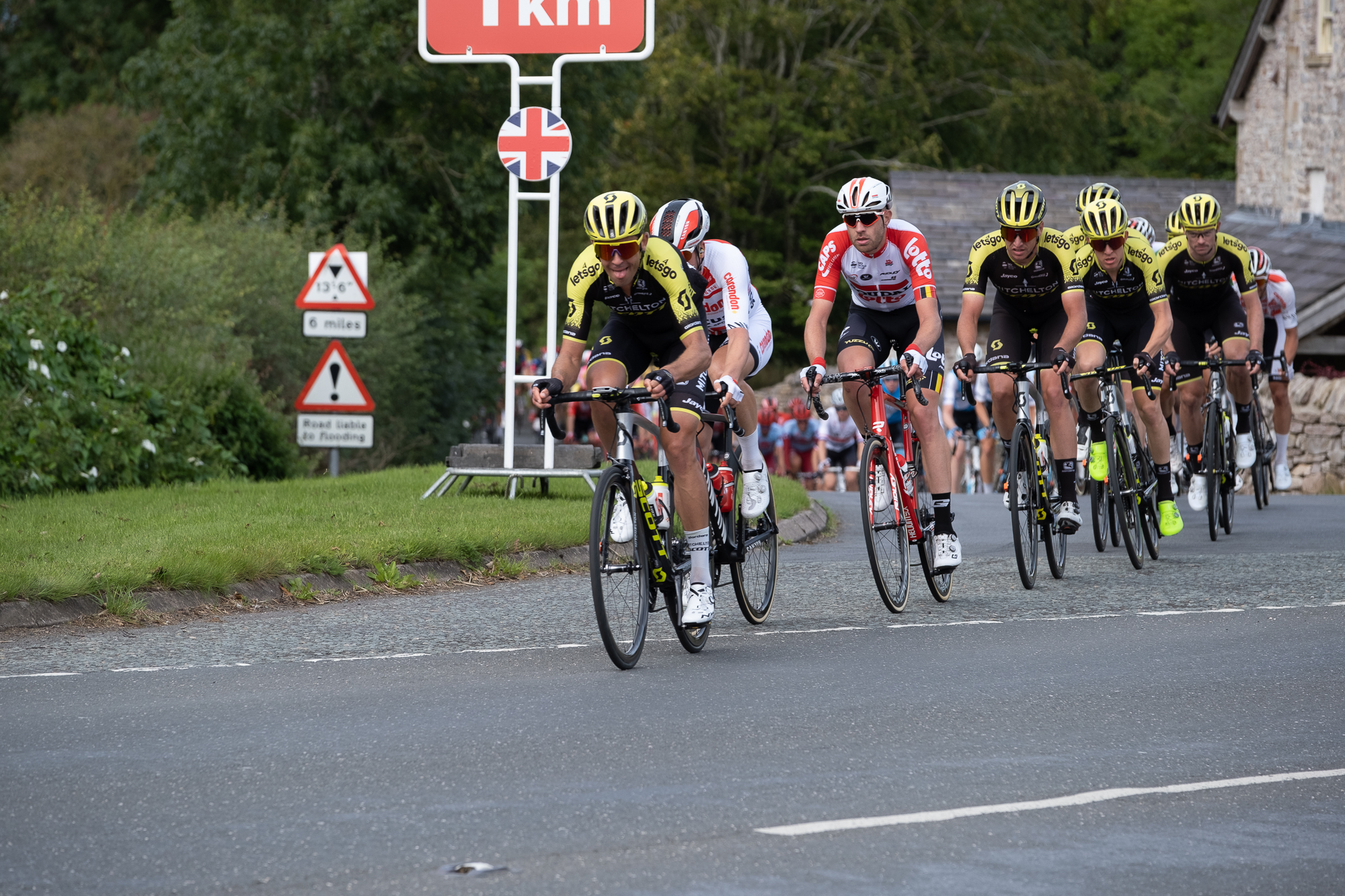 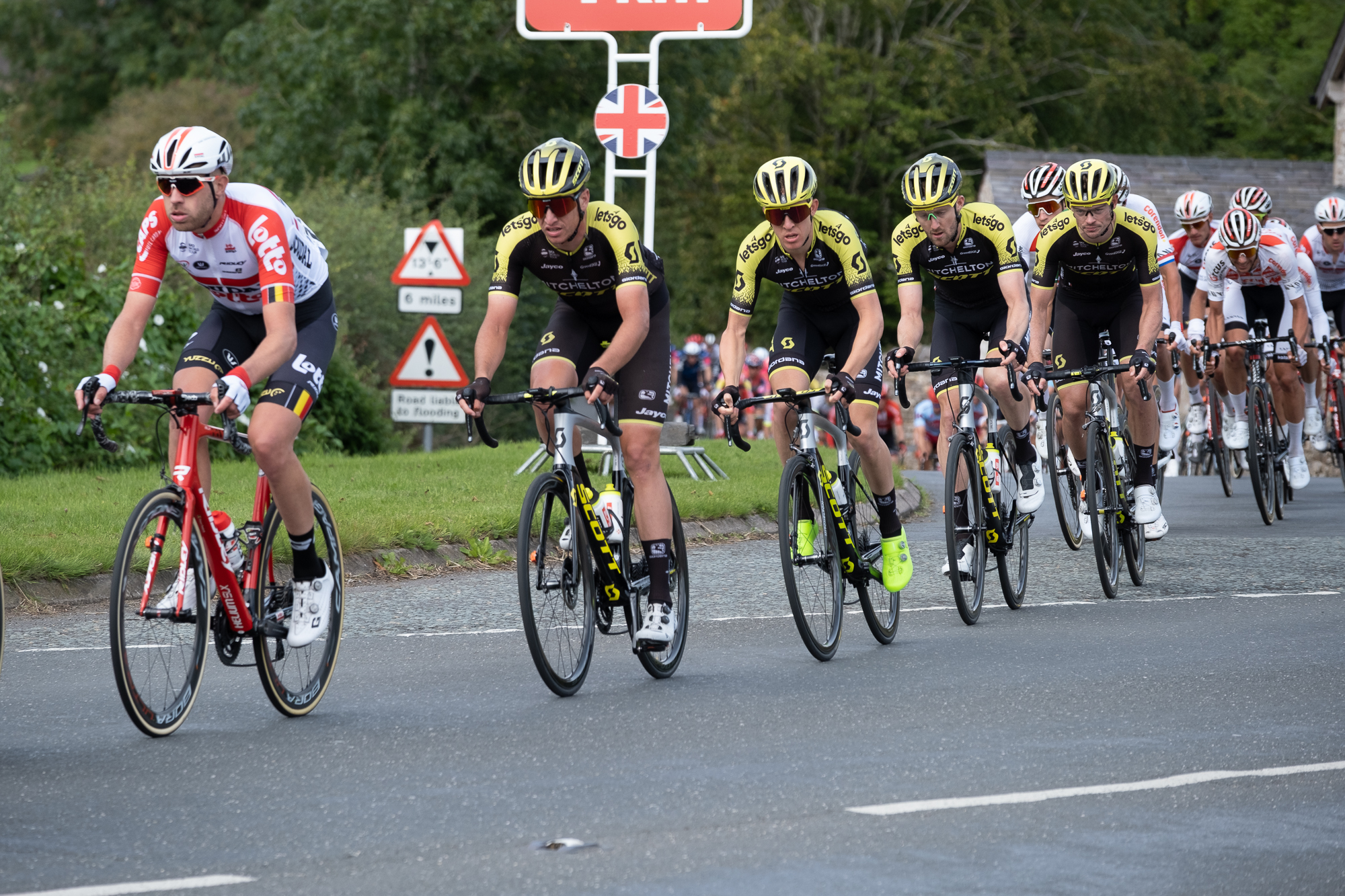 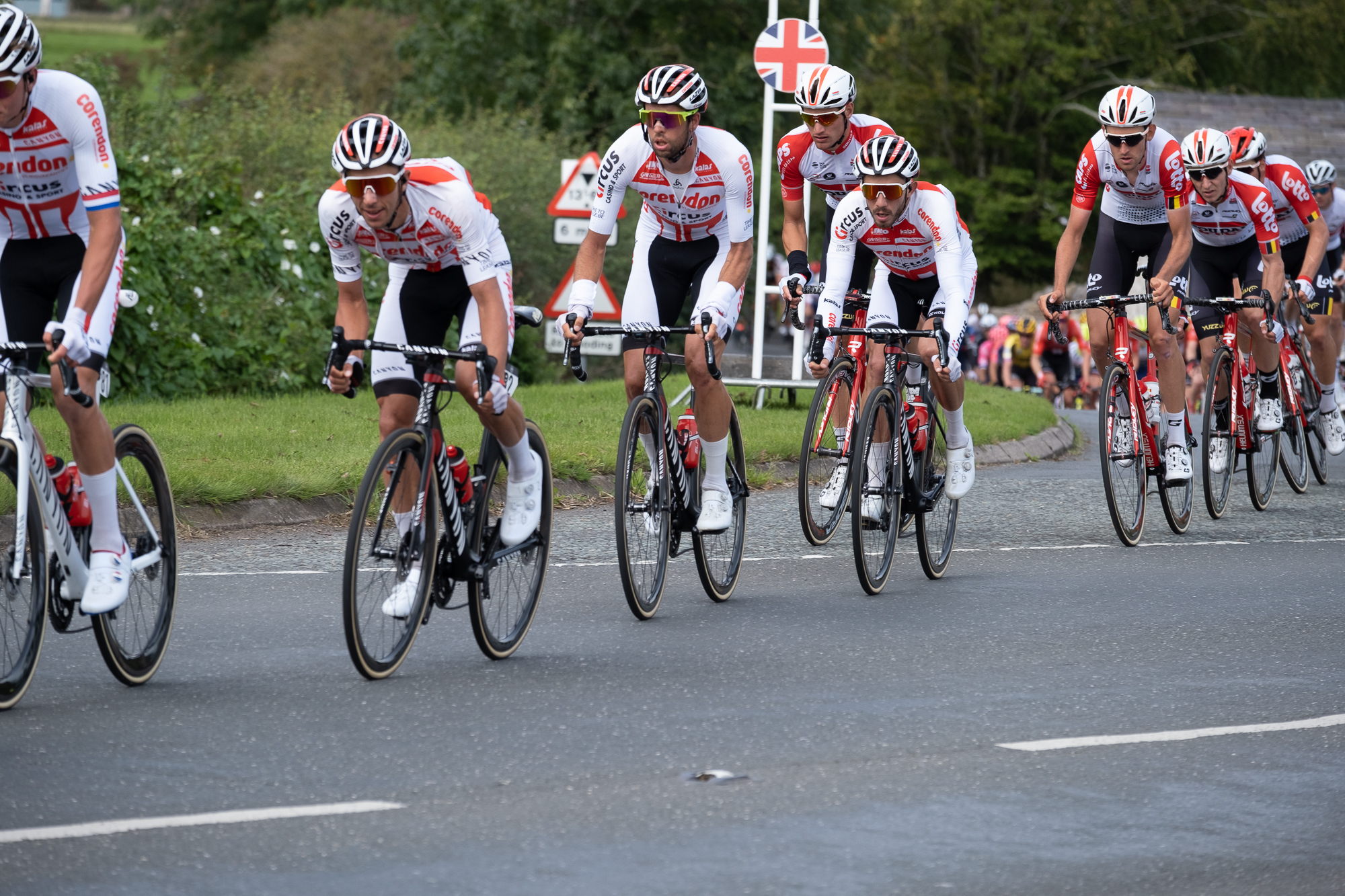 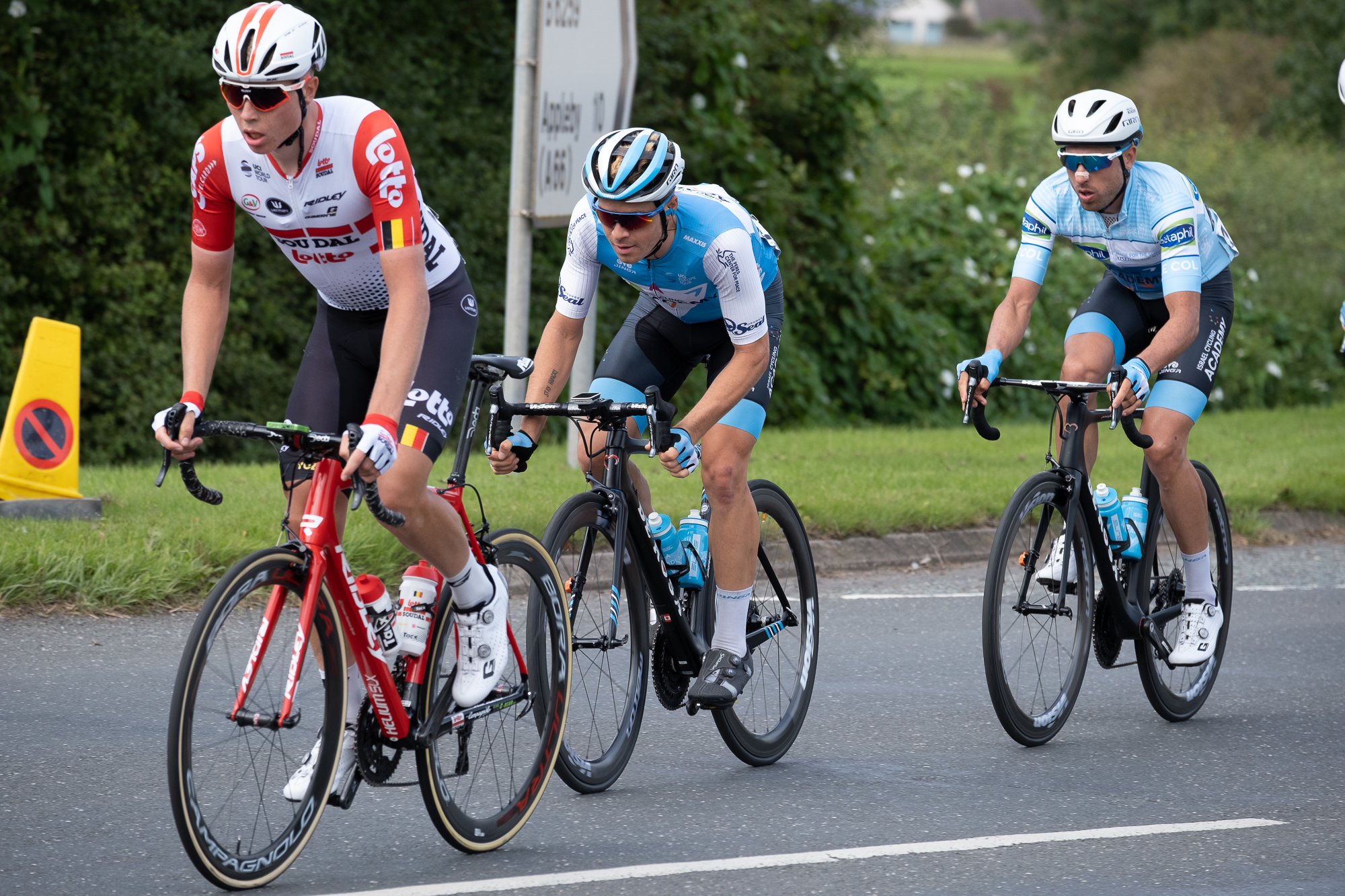 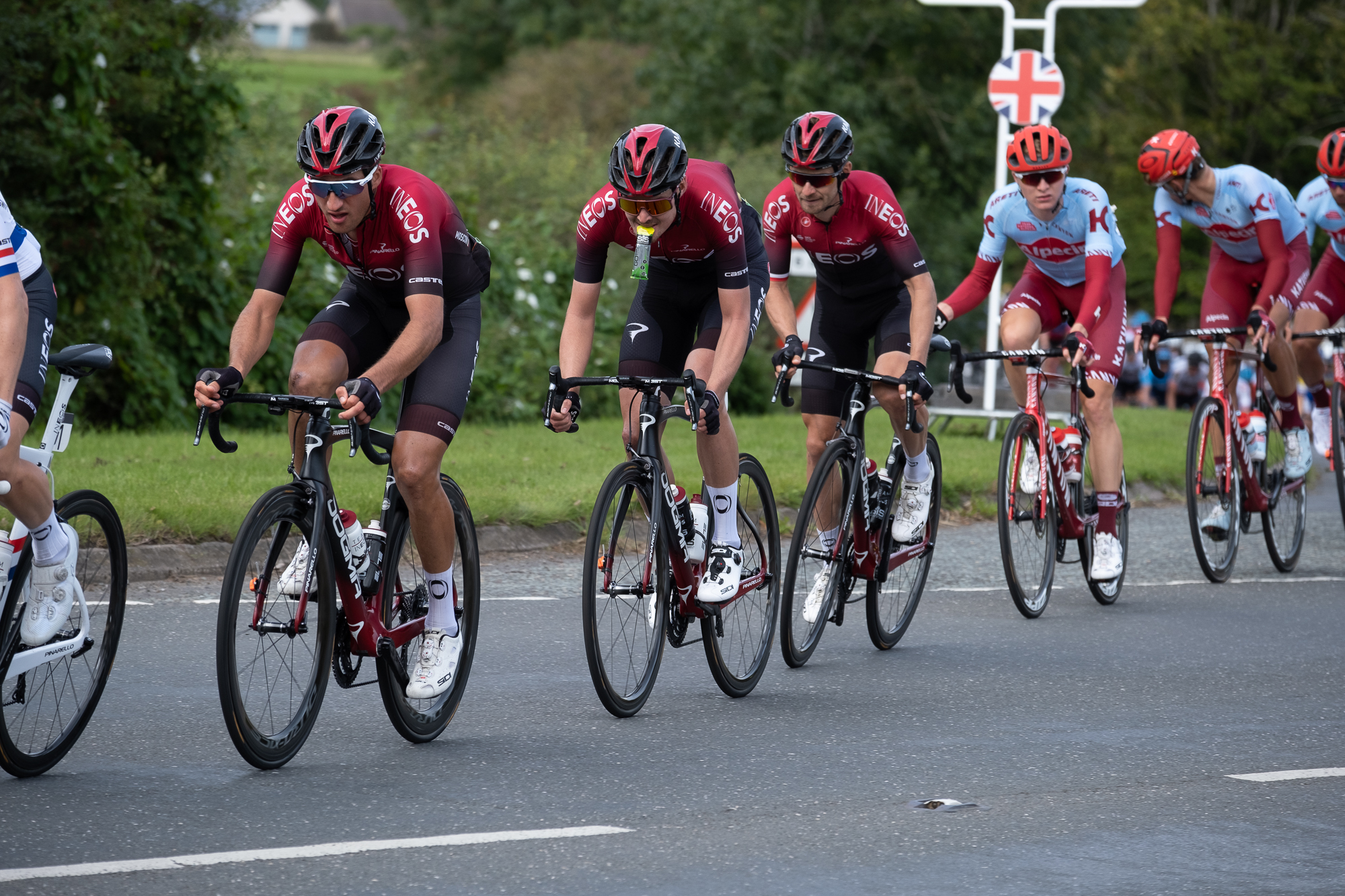 Haven’t quite mastered eating these gel things yet.. 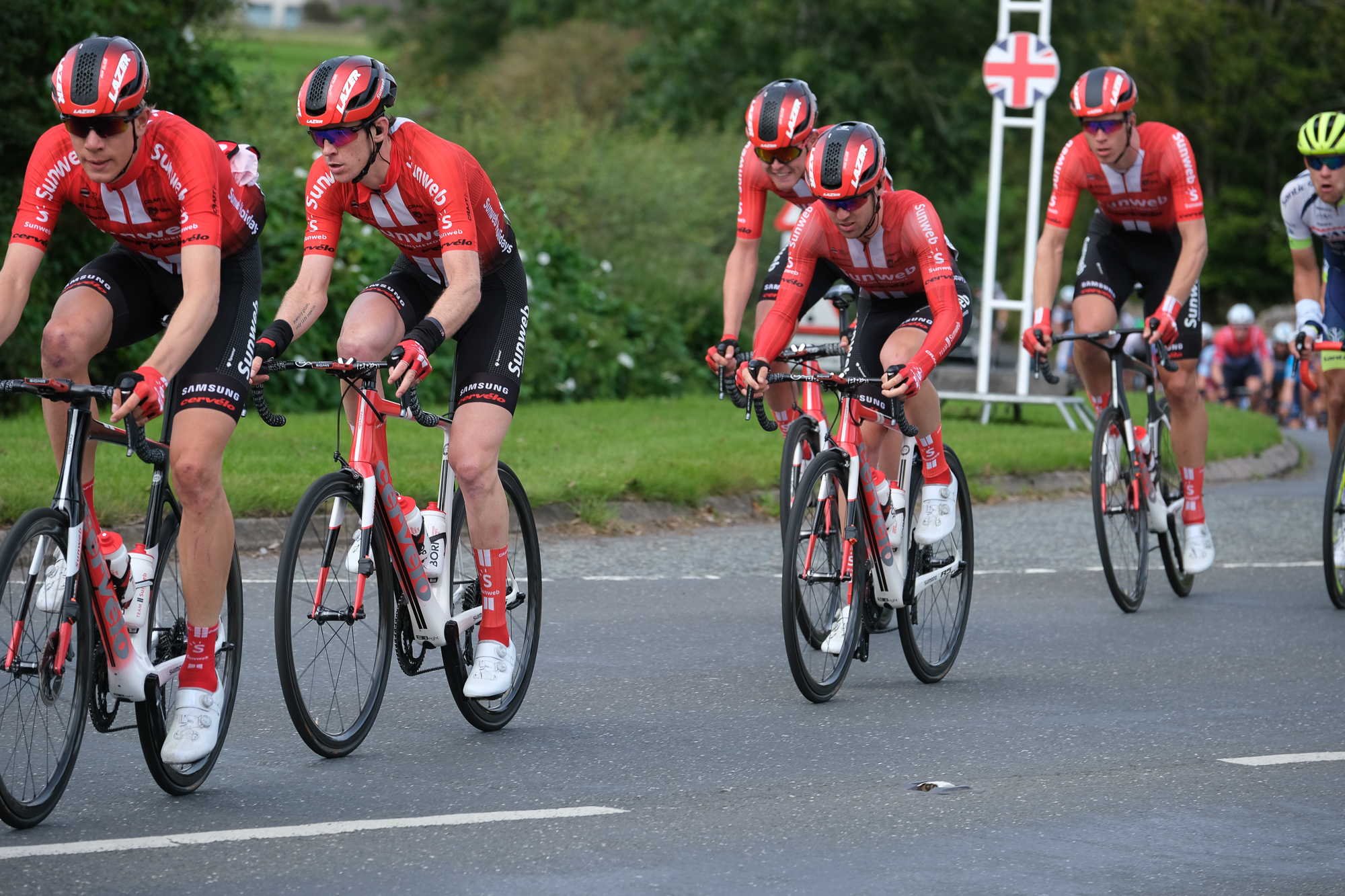 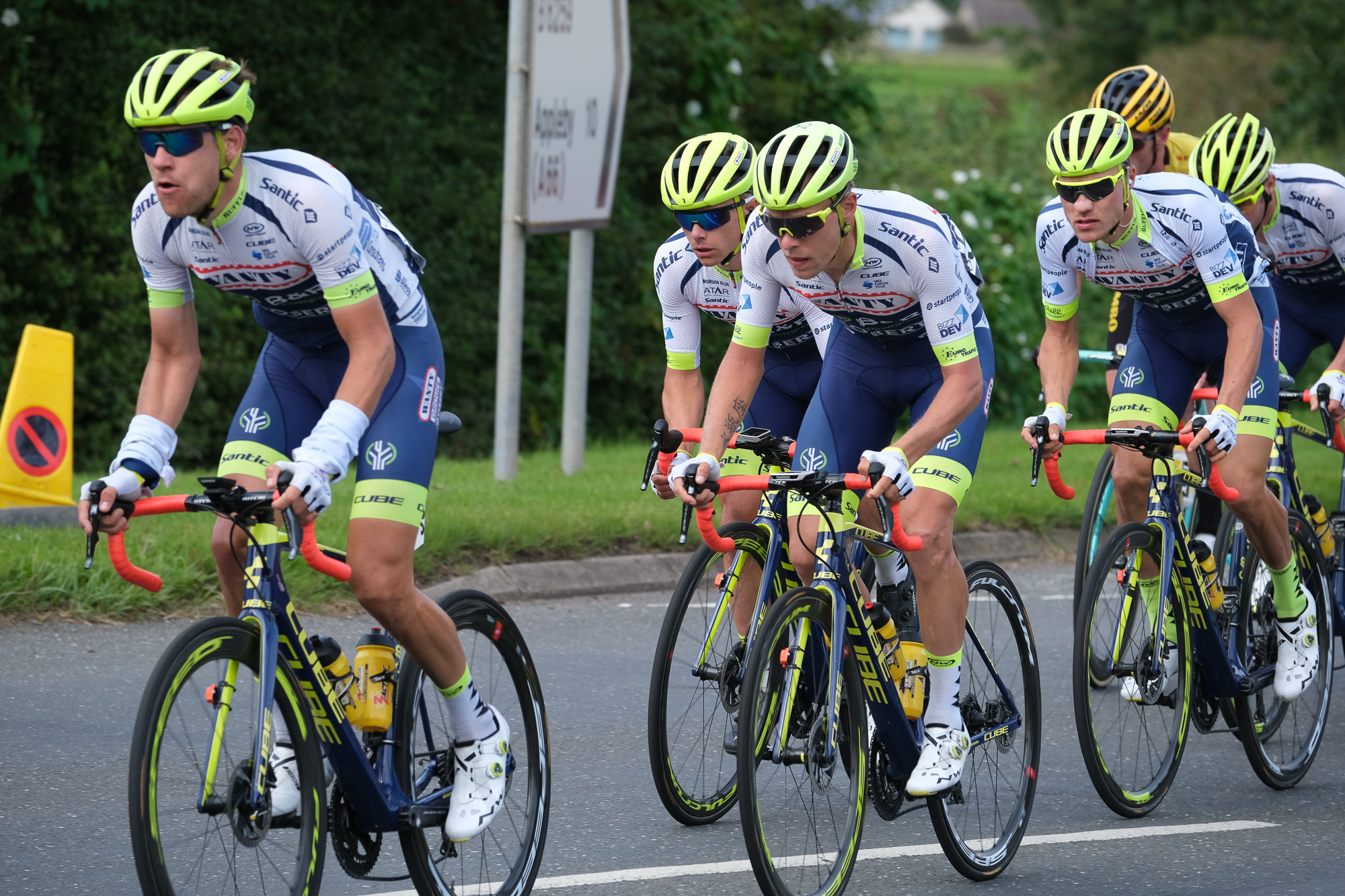 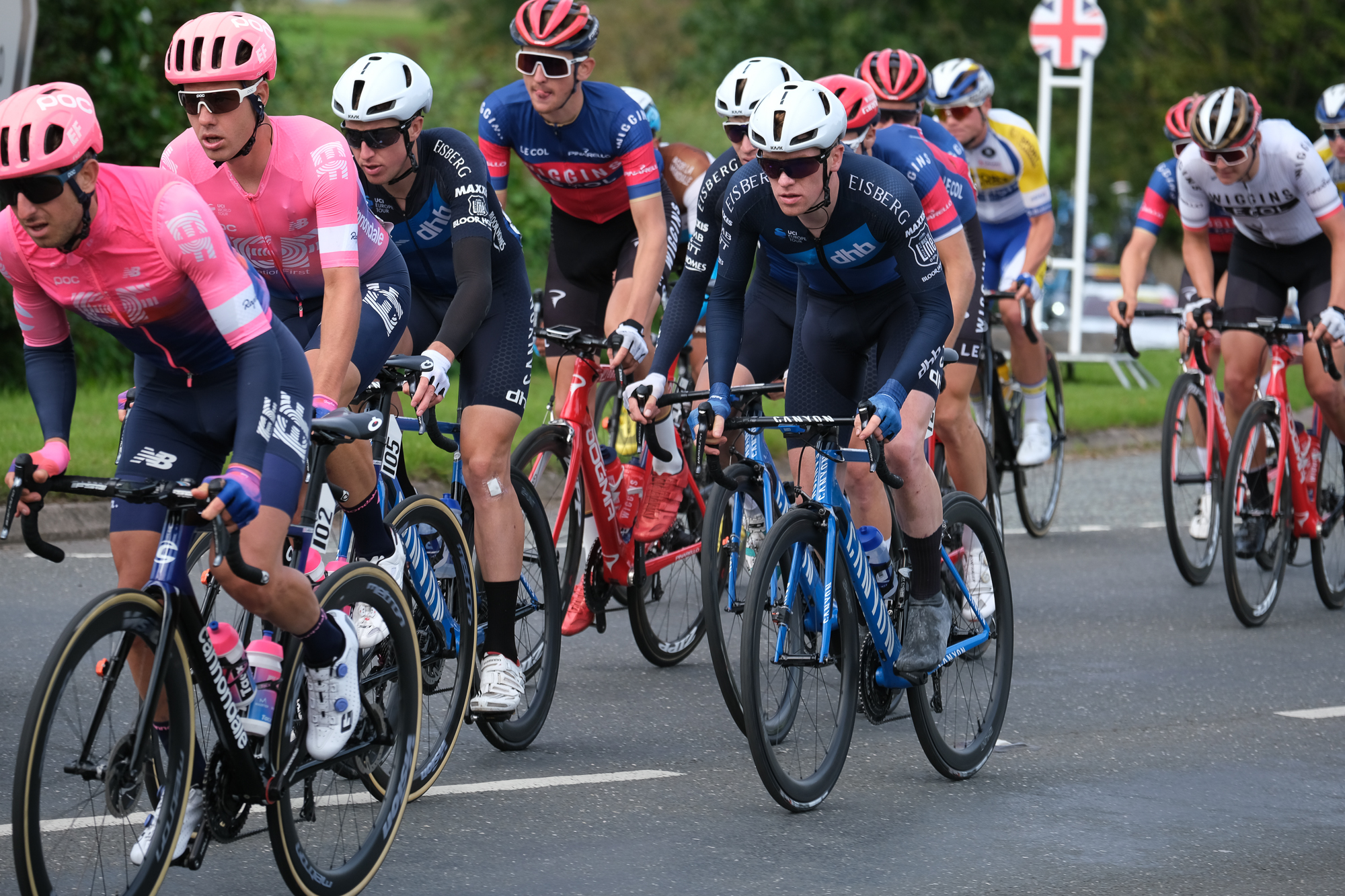 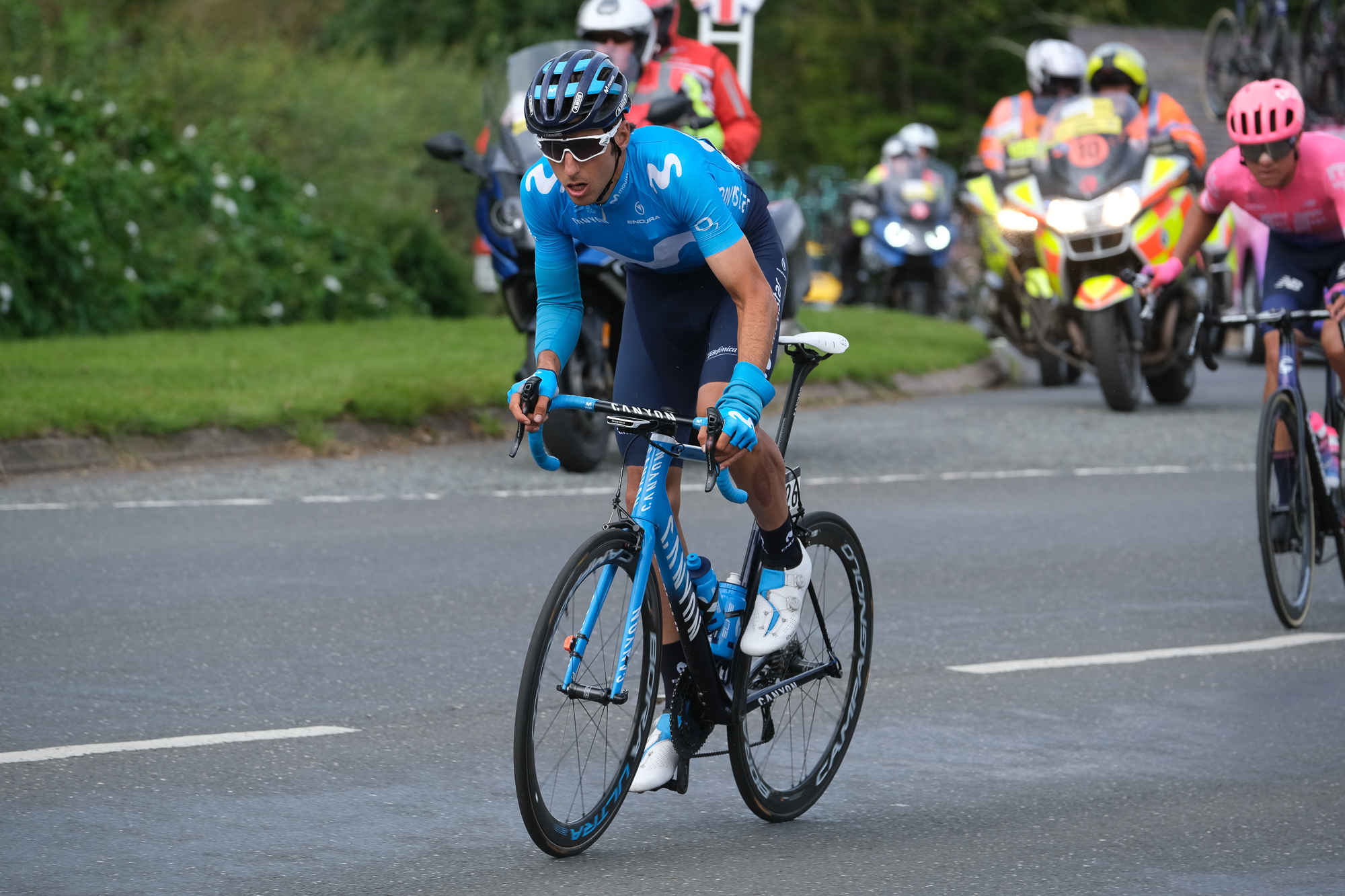 The day was won by Mathieu van der Poel, who took the overall lead and the Green Jersey by mere one second.

So, Wednesday started with wind and rain, which didn’t look like it would go off. I thus checked Facebook again to see who was where, and left it as late as I could (around 11:00), dressed in a long sleeve shirt, cap, leggings, overshoes and a rain cape in my sawn off plastic bottle and my camera gear in my saddlebag and set off. By the time that I was halfway up the Yeld, I was overheating and pouring with sweat as the sun made itself known.

No one was there as I arrived, but soon enough, blue and yellow appeared from the top, then the bottom of the road, and converged just a bit lower than the top of the hill. 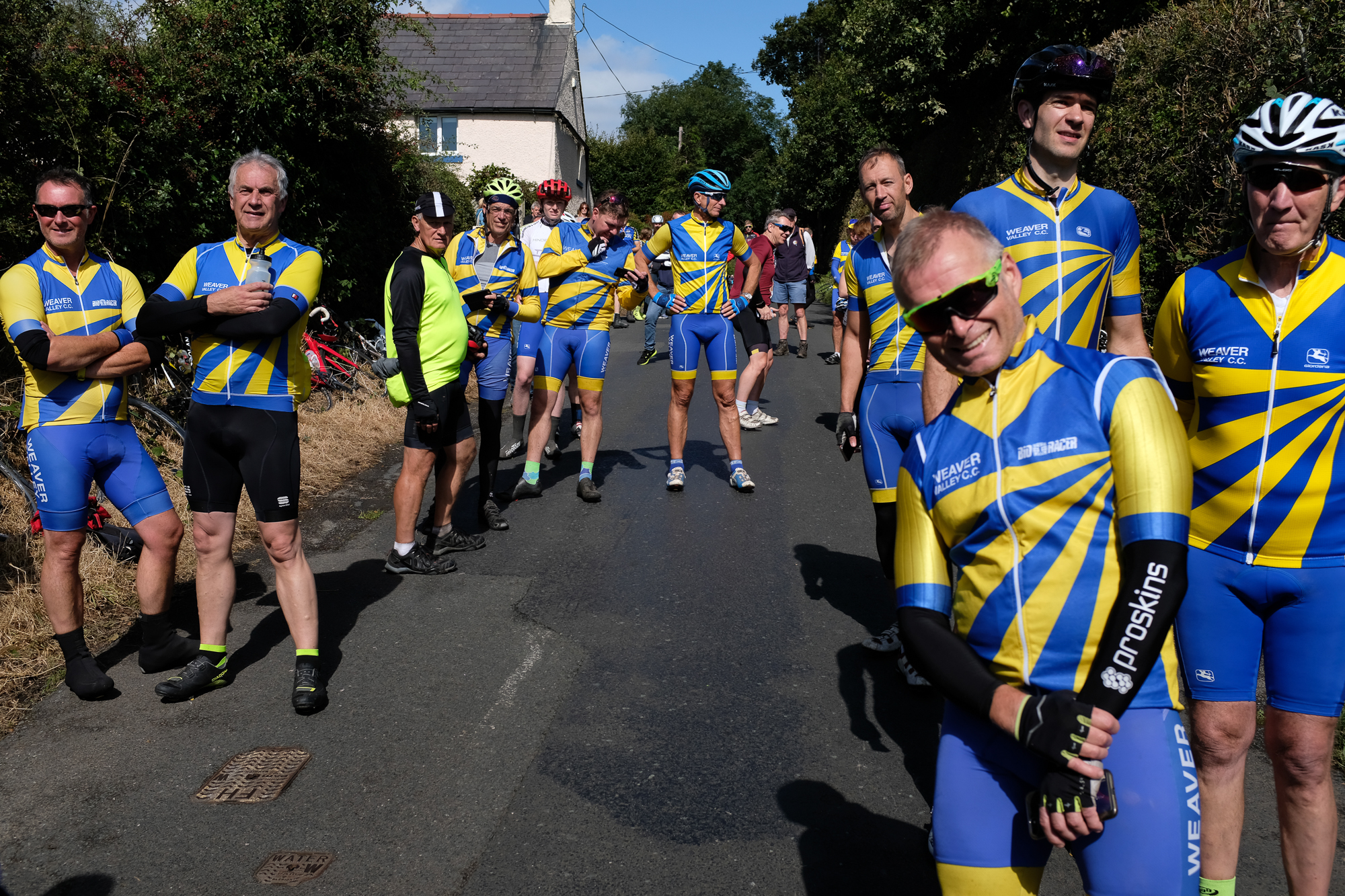 The rabble took over…

The race neared, and soon, the breakaway hit the slope after the usual noisy introduction of cars, Police and NEG outriders – and a loud hailer shout out from course commentator Carl Lawrenson for WVCC.

Jacob Scott, KoM leader romped up first, hardly out of breath, and a minute or two later, the peloton, with  Mathieu van der Poel seemingly the only one out of the saddle. 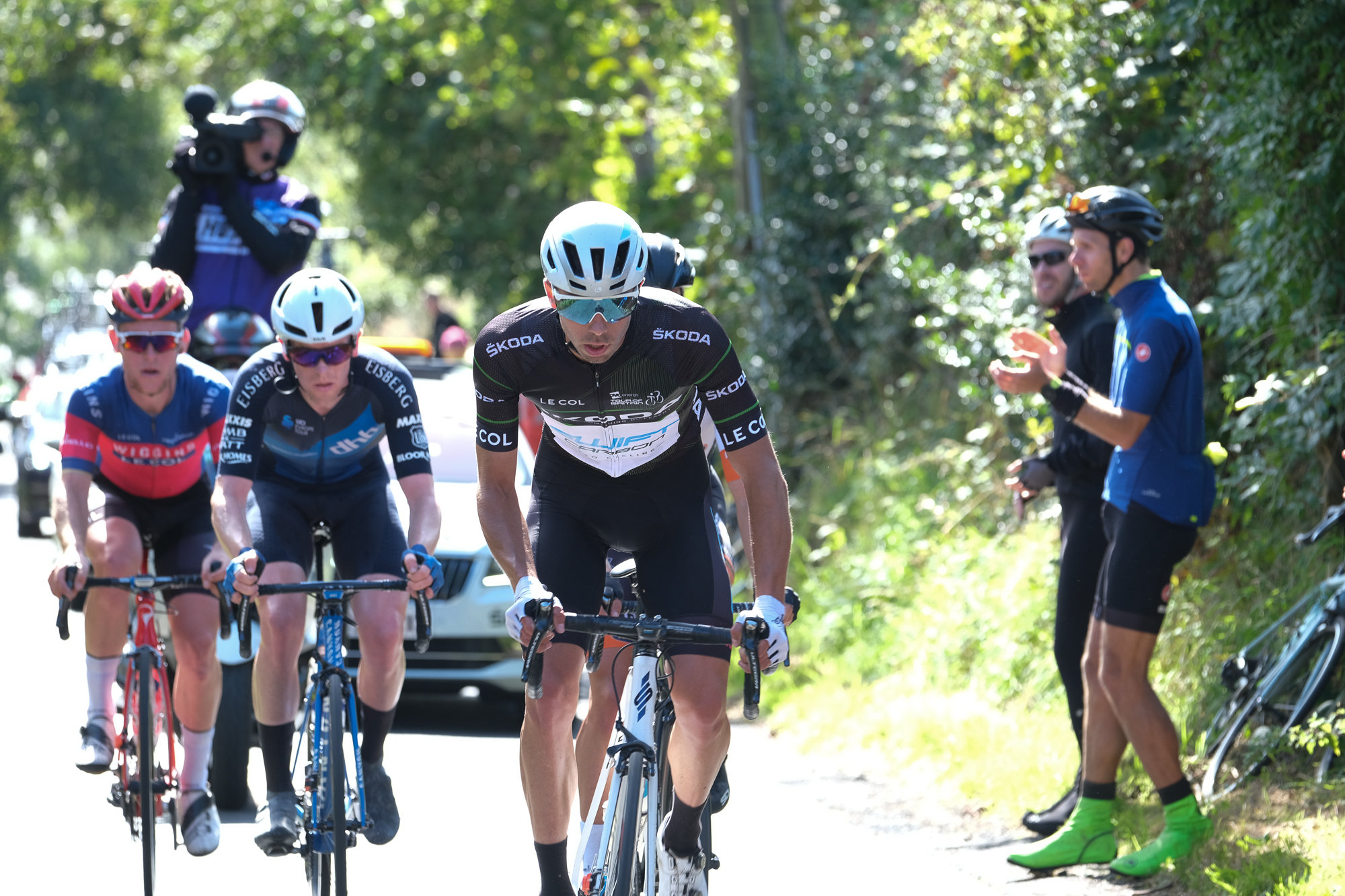 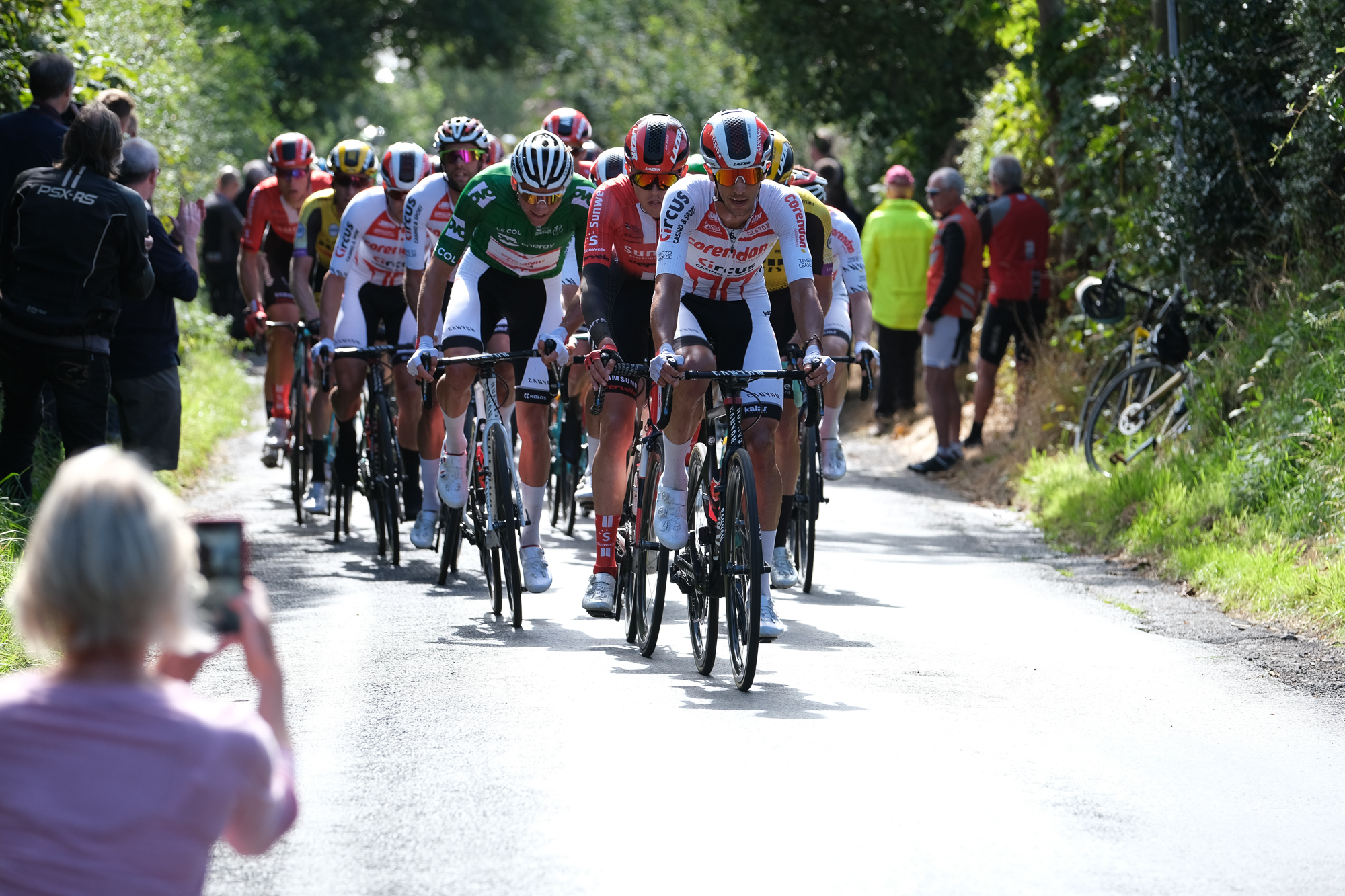 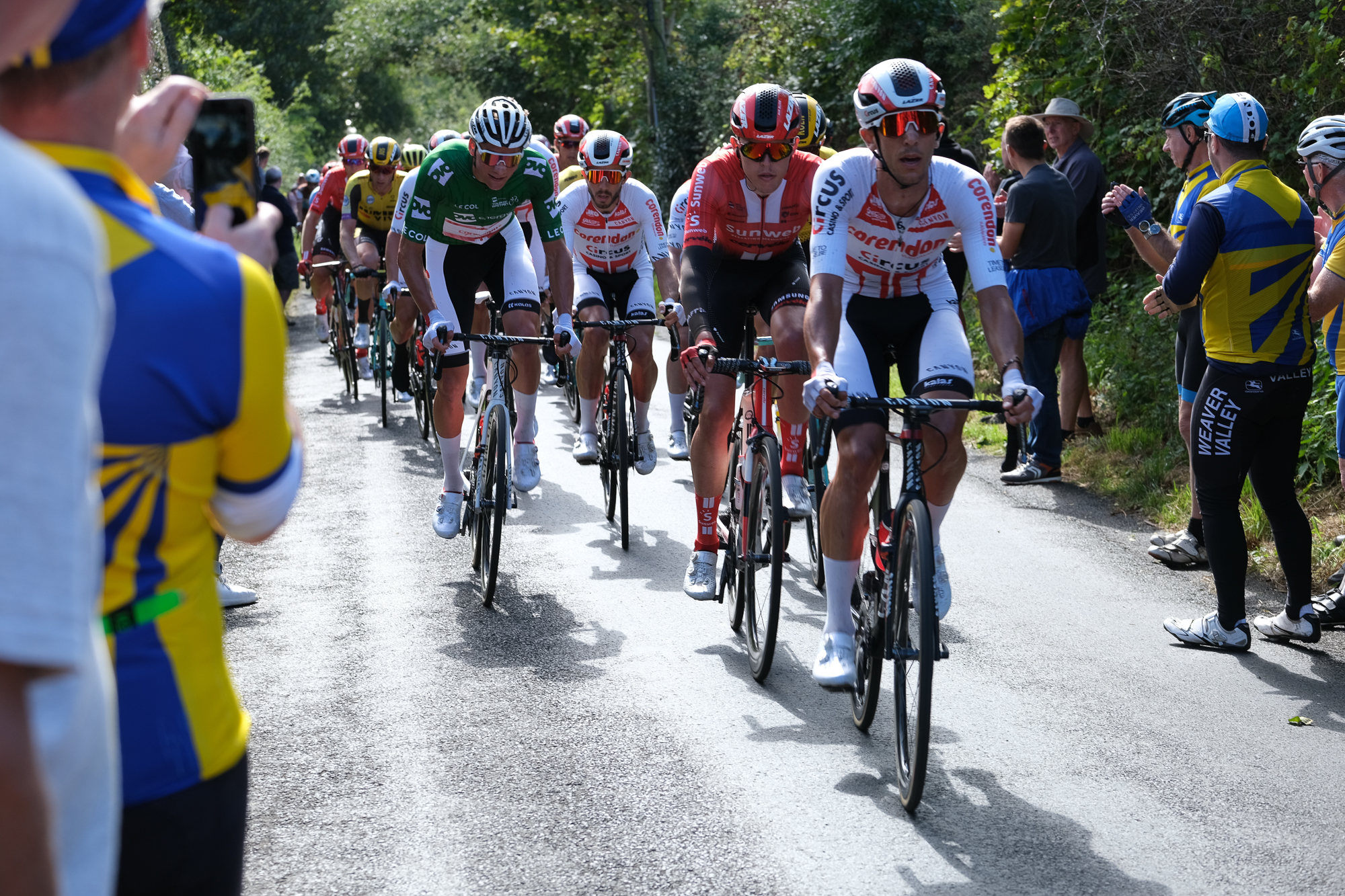 They make it look so easy.

And then they were gone, leaving a gaggle of Weaver Valley jerseys. The only thing left was for a group photograph, obviously, so here they are. 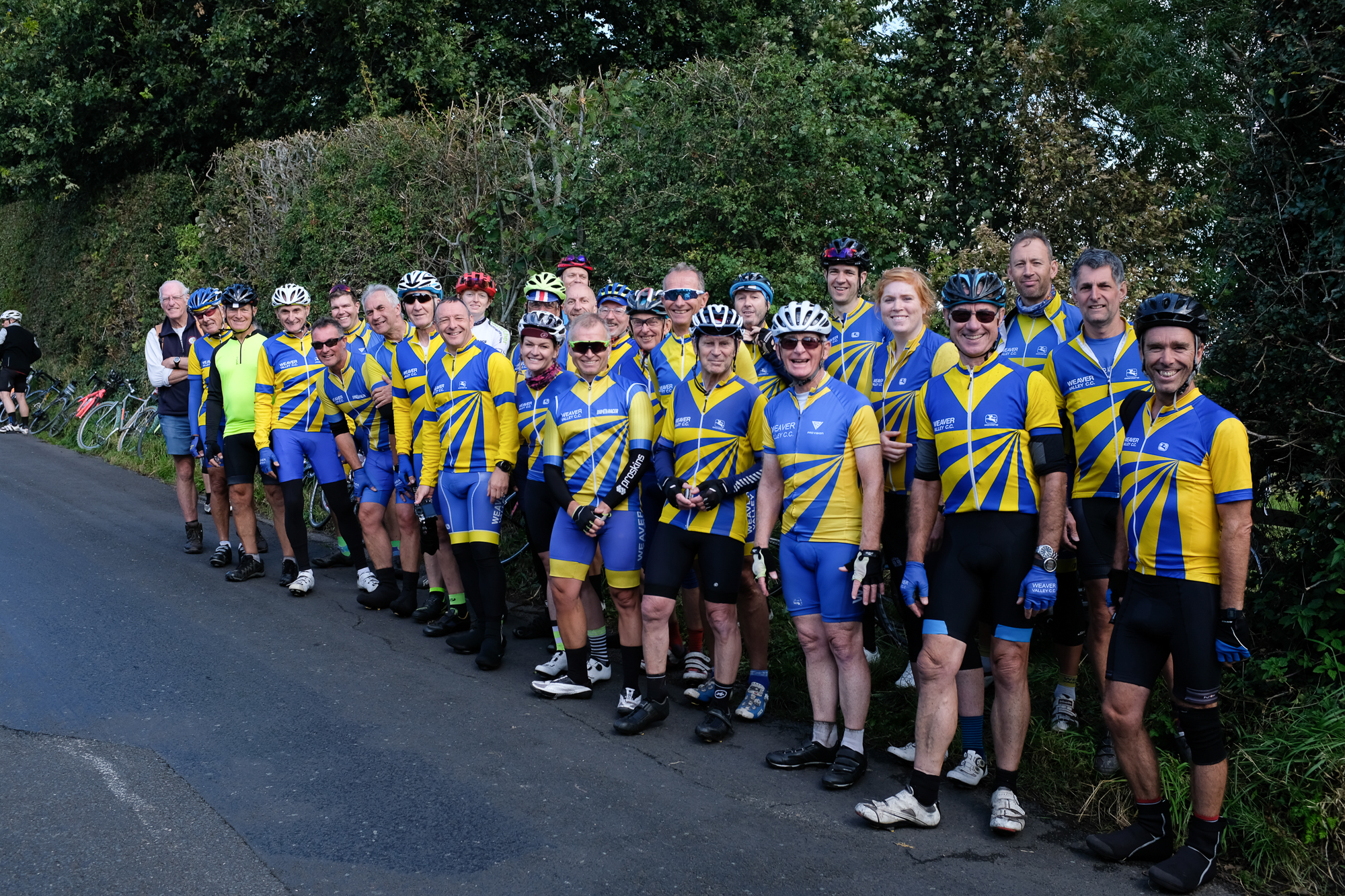 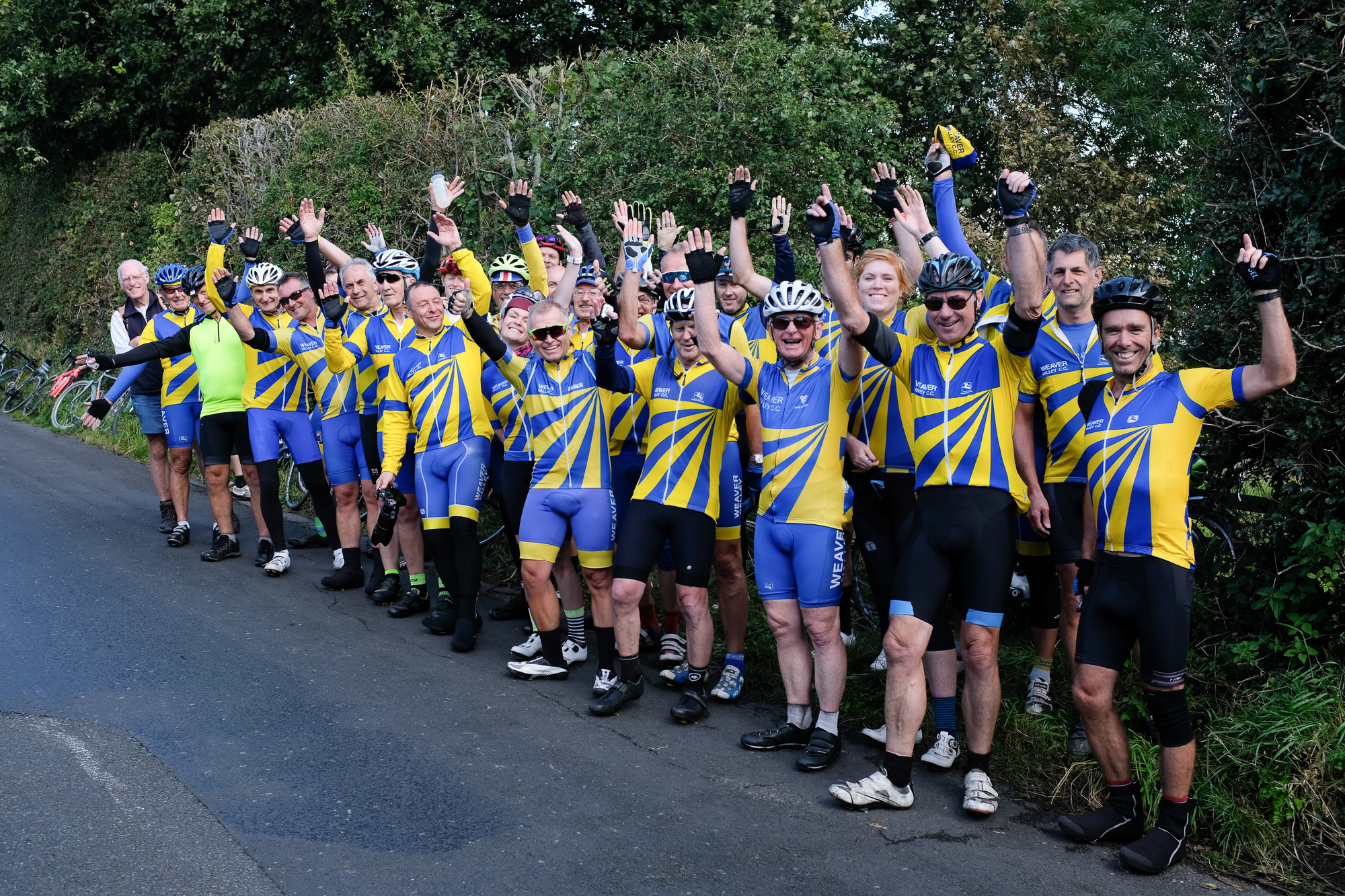 Dylan Groenewegen managed to win the stage – again – his hat-trick, it seemed with relative ease with a powerful push from legs spinning at a lower cadence than others in the sprint.

The most interesting result was that of Matreo Trentin, claiming the Green Jersey back after sneaking over the line to get some bonus seconds. The gap only 3 seconds though, with a time-trial tomorrow..

Given our dominance on the hill, we did manage to get on the telly. 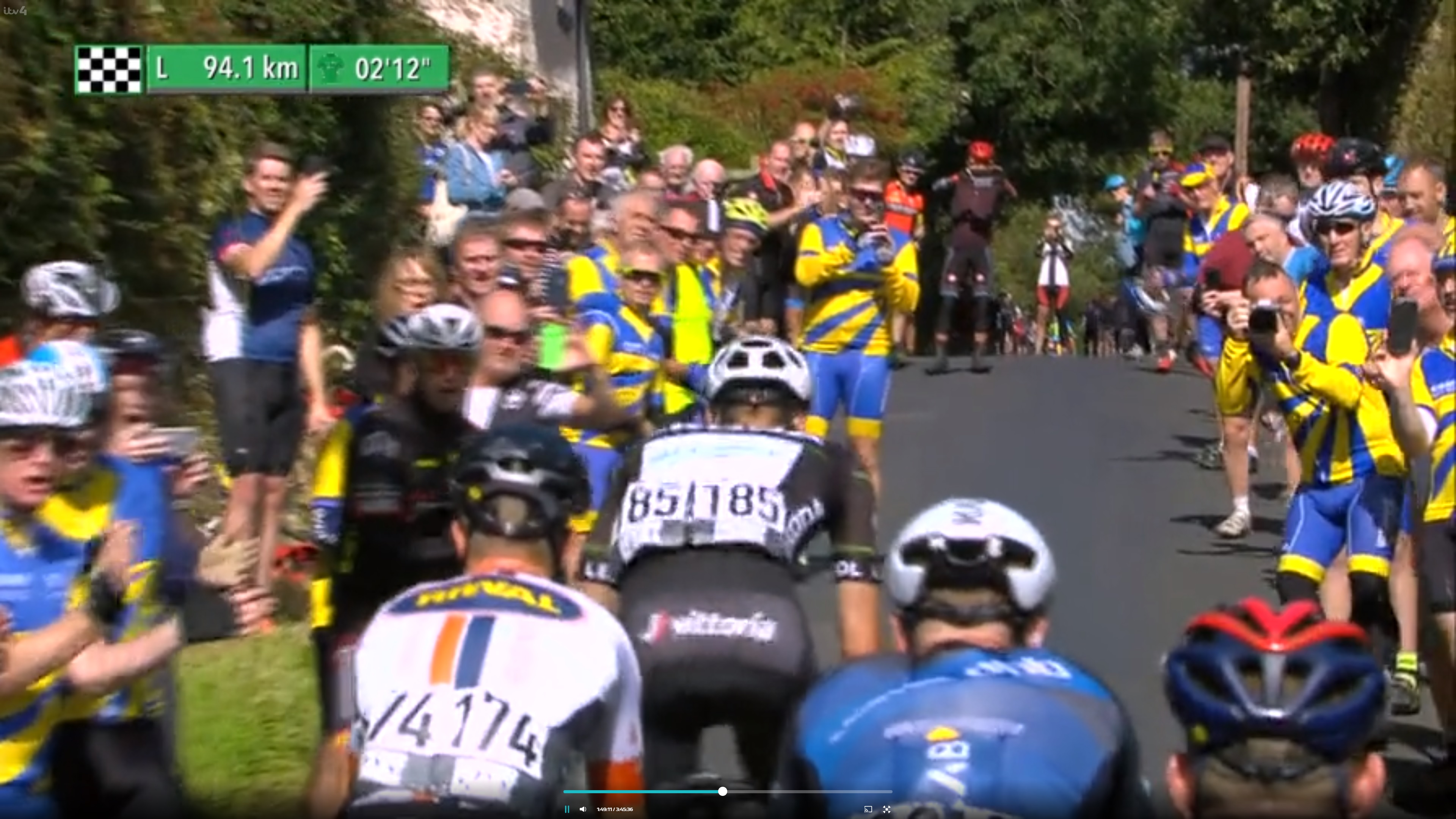 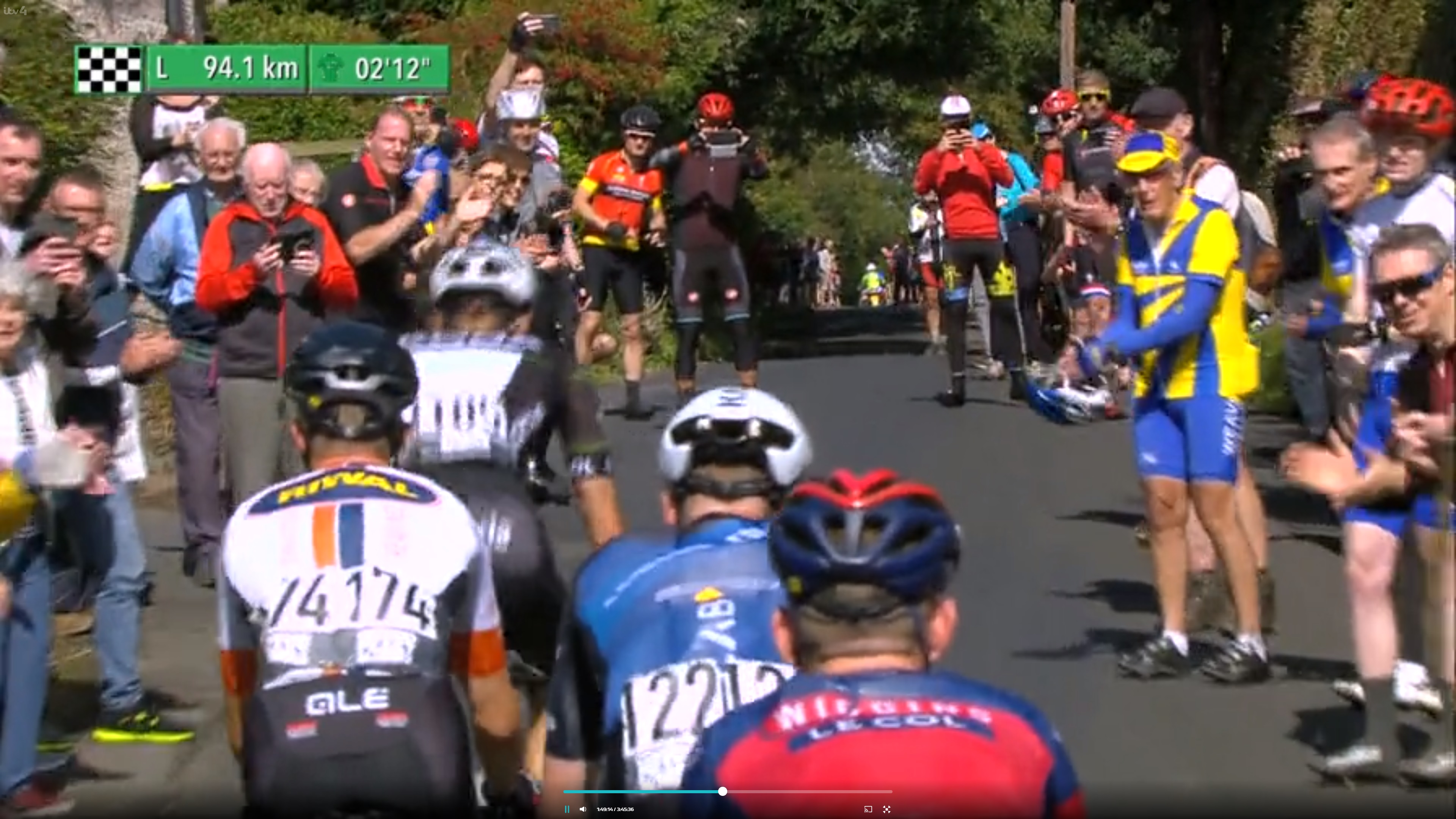 Articles, General, General news, Training/Racing
BDCA 100- the beating of the 4 hour barrier
How to cycle underneath a river