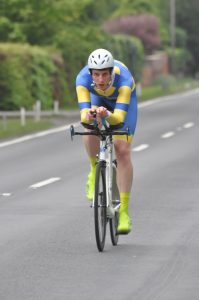 After doing my first 100 mile tt in July, I was keen to have another go at hopefully dipping under 4 hours and doing a 25mph ride, so Dave Fearon encouraged me to enter the BDCA event on the A100/4 course (on the A50 near Uttoxiter) which is known for being pretty quick.
To prepare myself for the huge amount of calories I was to burn, I had a go at ‘carb loading’ by visiting the carvery for lunch yesterday followed by a huge portion of gnocchi and a massive cheesecake for tea. I think I overdid it a tad…
My start time wasn’t until 13:02 so I had plenty of time to sort myself out in the morning before driving down to Etwall village hall (event hq). Once I’d faffed about putting my skin suit on and applied industrial amounts of chamois cream I rolled out to the start and tried to get focused.

The A100 is not a picturesque course; it’s 99% dual carriageway with a few roundabouts and a brown concrete surface which is actually pretty good to ride on but incredibly loud when you’re being passed by traffic. I wasn’t there for a picturesque bimble though, I was there to go as quick as I could and it’s a good course for that. I got my average speed up to 26.5 mph within the first 8 or so miles and was feeling pretty good, constantly trying not to get carried away which would lead to problems later. It was going smoothly untill I got caught by some red lights on the pedestrian crossing for McDonalds. This didn’t impeed me much though and I was back up to speed quickly, soon reaching the 25 miles and the end of the first of four laps. At 50 miles I was comfortably on target, keeping myself topped up on gels and energy drink and my back was feeling ok too.

By 75 miles my back was hurting and I was having to stretch every so often, it was manageable though so I just put it to the back of my mind and got on with it. Fortunately I seemed to have paced the ride ok and I wasn’t loosing much average speed, unlike my first hundred where I lost a chunk of time in the last 30 miles. In the last 12.5 miles I was able to empty the tank and I finished with a time of 3:51:33, a face crusted in sweat and snot and skinsuit full of gel wrappers. Pretty happy with my time for my 2nd ever 100 but next year I’d like to go even quicker. Today’s event was won by Jonathan Shubert with a mental time of 3:19:58!!