Difficult one to categorize this one, so it’s filed under Road Run, ‘cos technically, we did ride on the road for some of it, but it’s also filed under Special Event, because it was a brilliant day out.

Acton Lane (or ‘The Cliff’ as it seems to have become known) wasn’t massively busy when I arrived at around 09:30 (ish) on Monday 8th September. Woody was there, and Al was there, eager to get the new flags out for a try. 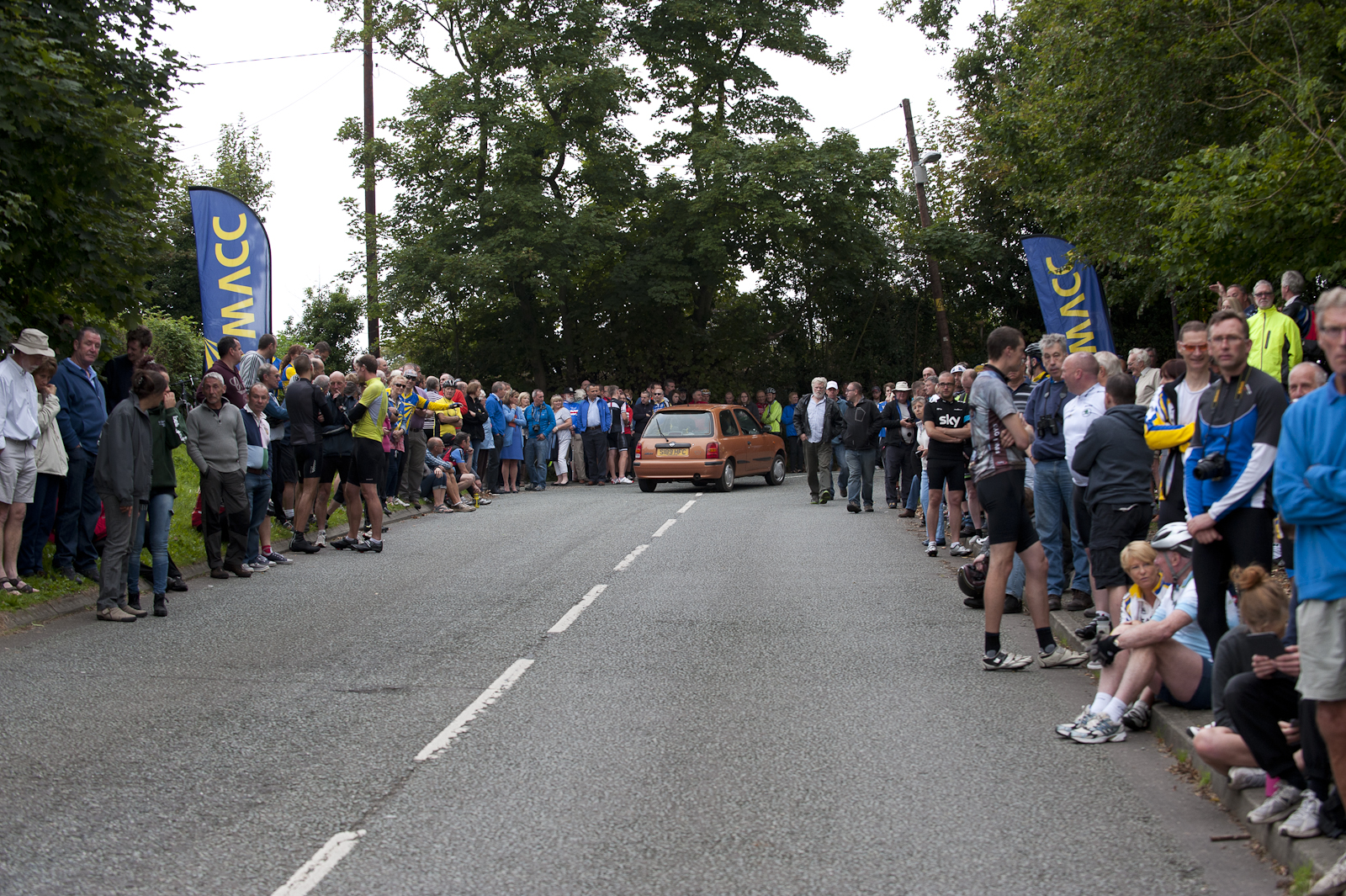 ‘The Cliff’ starts to get busy, and we are prominent with our flags. Smart. (BTW, the picture isn’t back-to-front-, the flags are printed on one side, so there is a ‘mirror’ image side!)

We soon gathered in force to claim our ground with a battle cry. 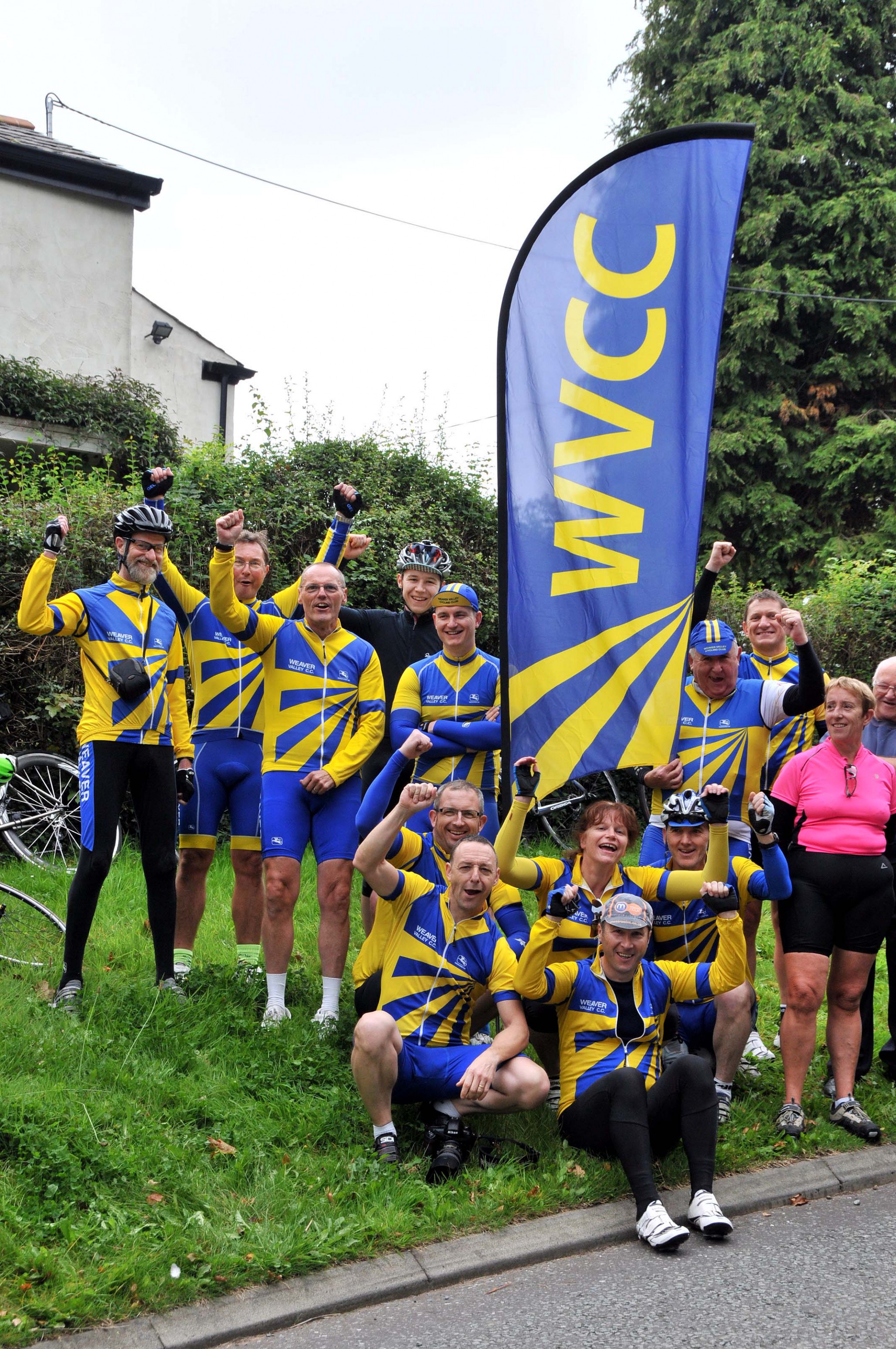 At one point whilst waiting, we thought we had the return of ‘Tack-Gate’. Fortunately, Kempy collected as many as he could in his tyres on the way up Acton Lane, thus sparing the pro-peloton. 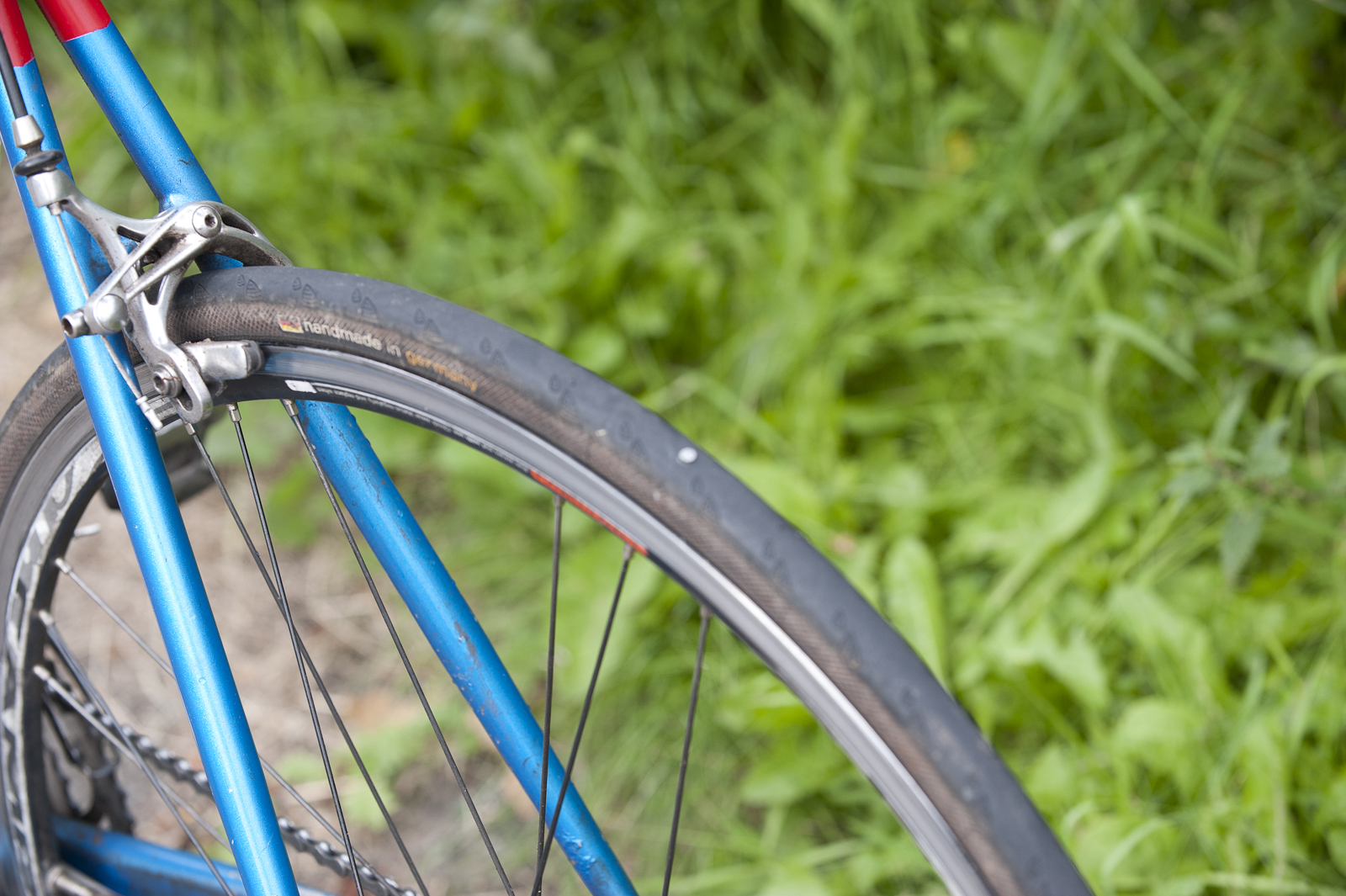 “There was no chance of stopping Kempy” said a despondent tack, earlier.

Also, as the Police outriders pitched right at the top of the hill, and then left, a handy streak of diesel managed to despatch one of said Police outriders down the road on his side. Chaos ensued as the lead cars were slowed and NEG riders jumped off their steeds to direct the trafic around the tasty slick that was perfectly spilt towards the left hander. 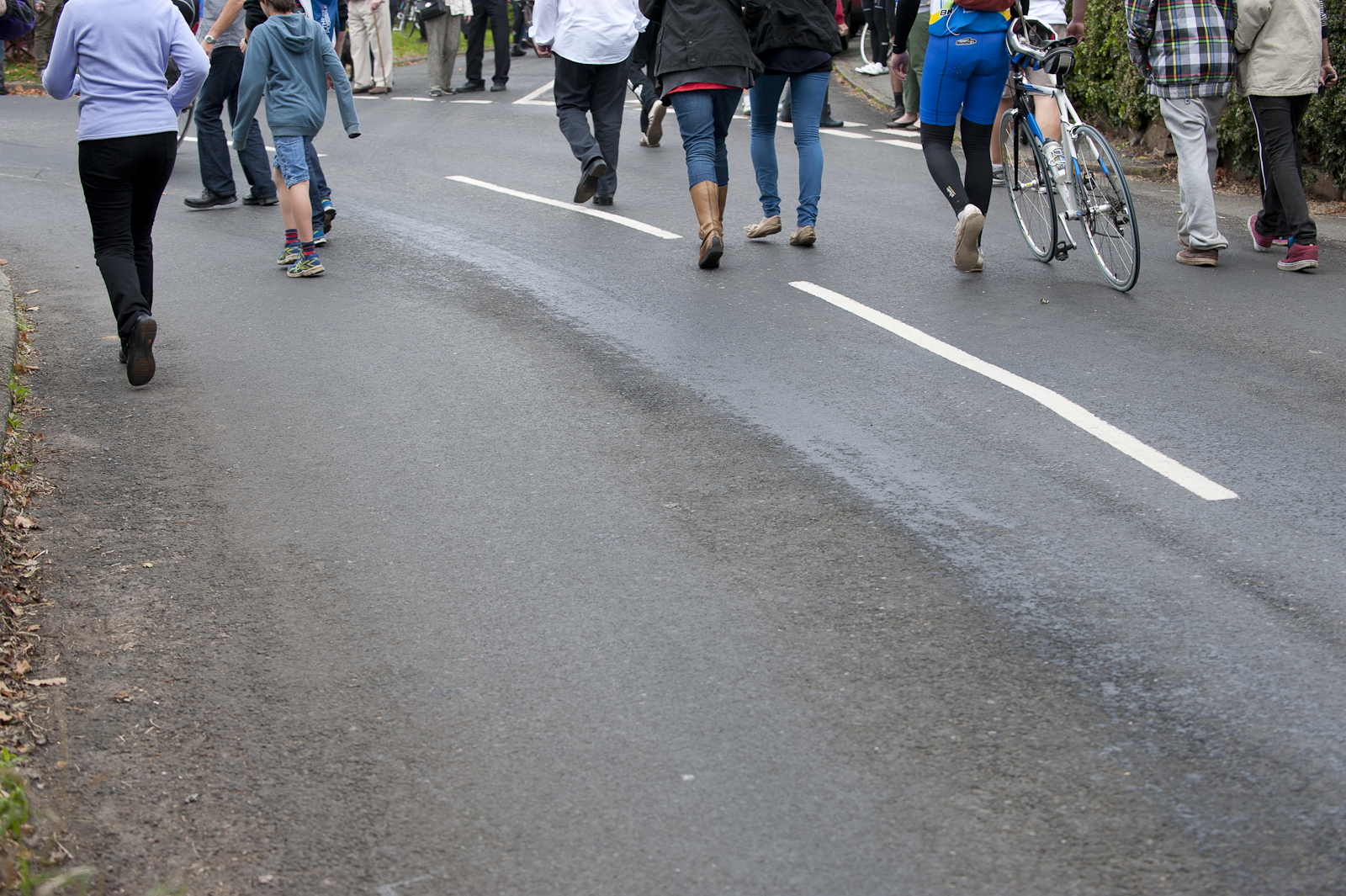 “It wasn’t me” – a line of freshly spilt diesel – earlier today.

The NEG riders did a fine job, and the lead cars moved on. 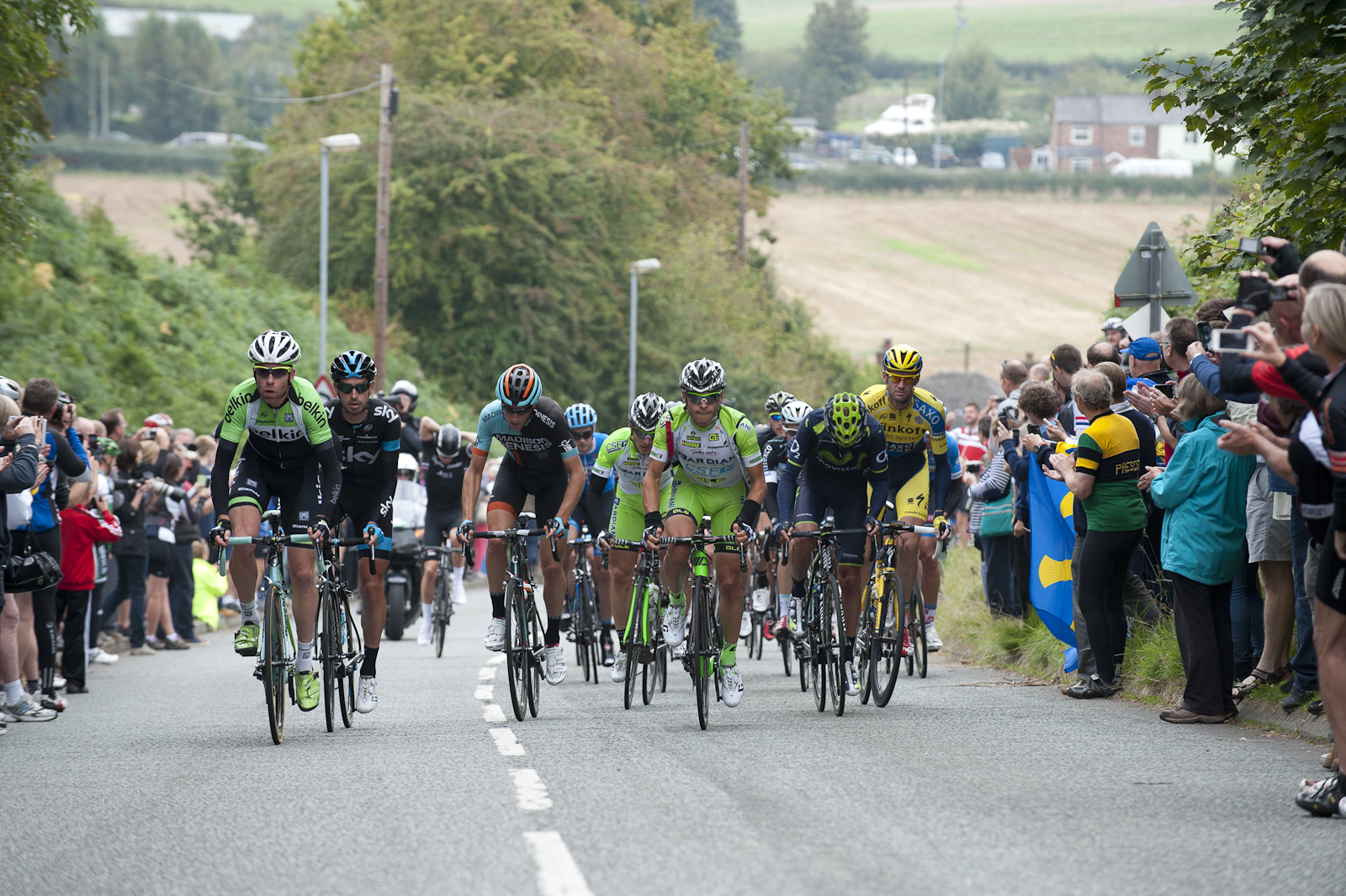 Soon it was time, and the break romped up the hill. 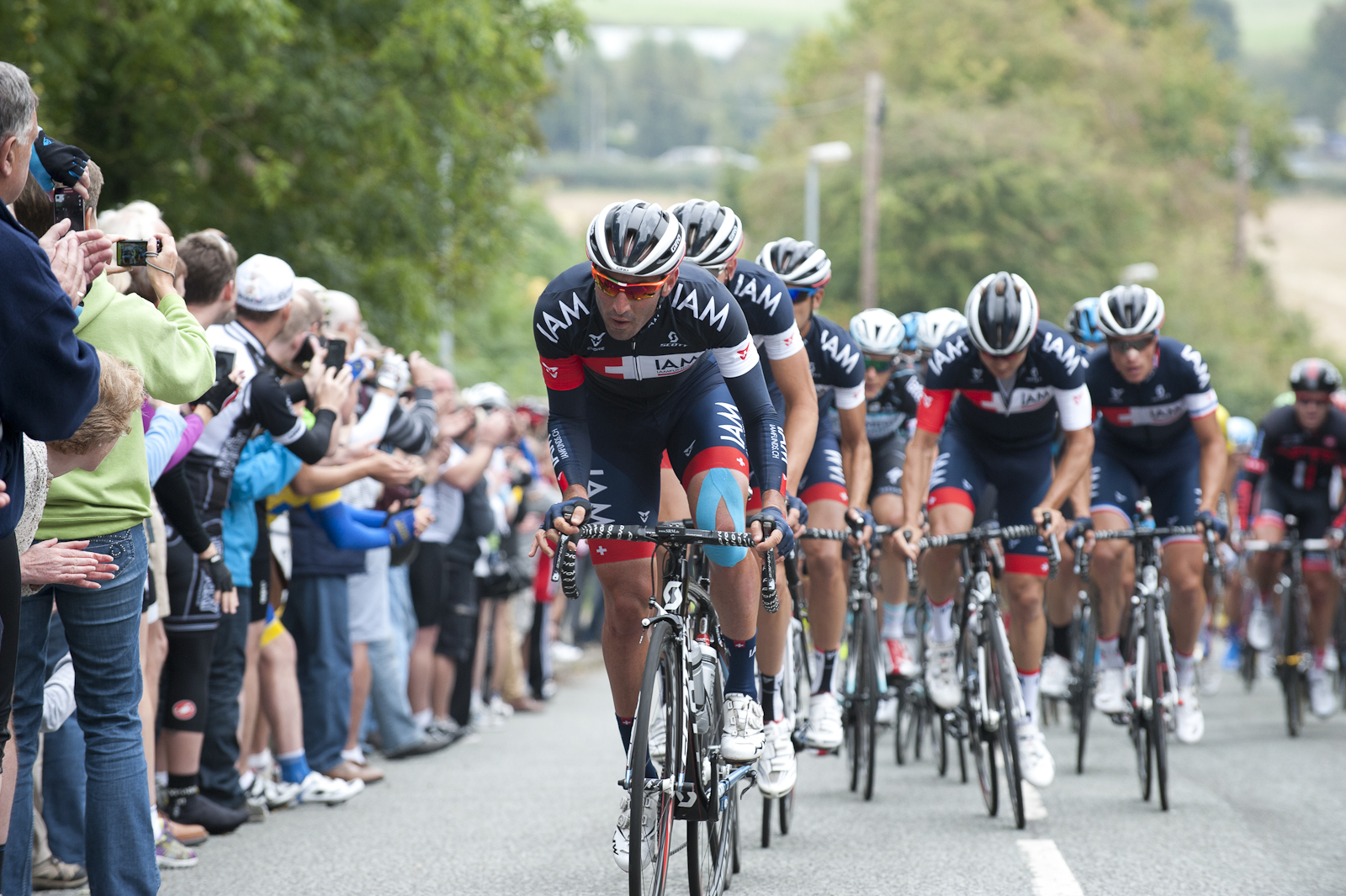 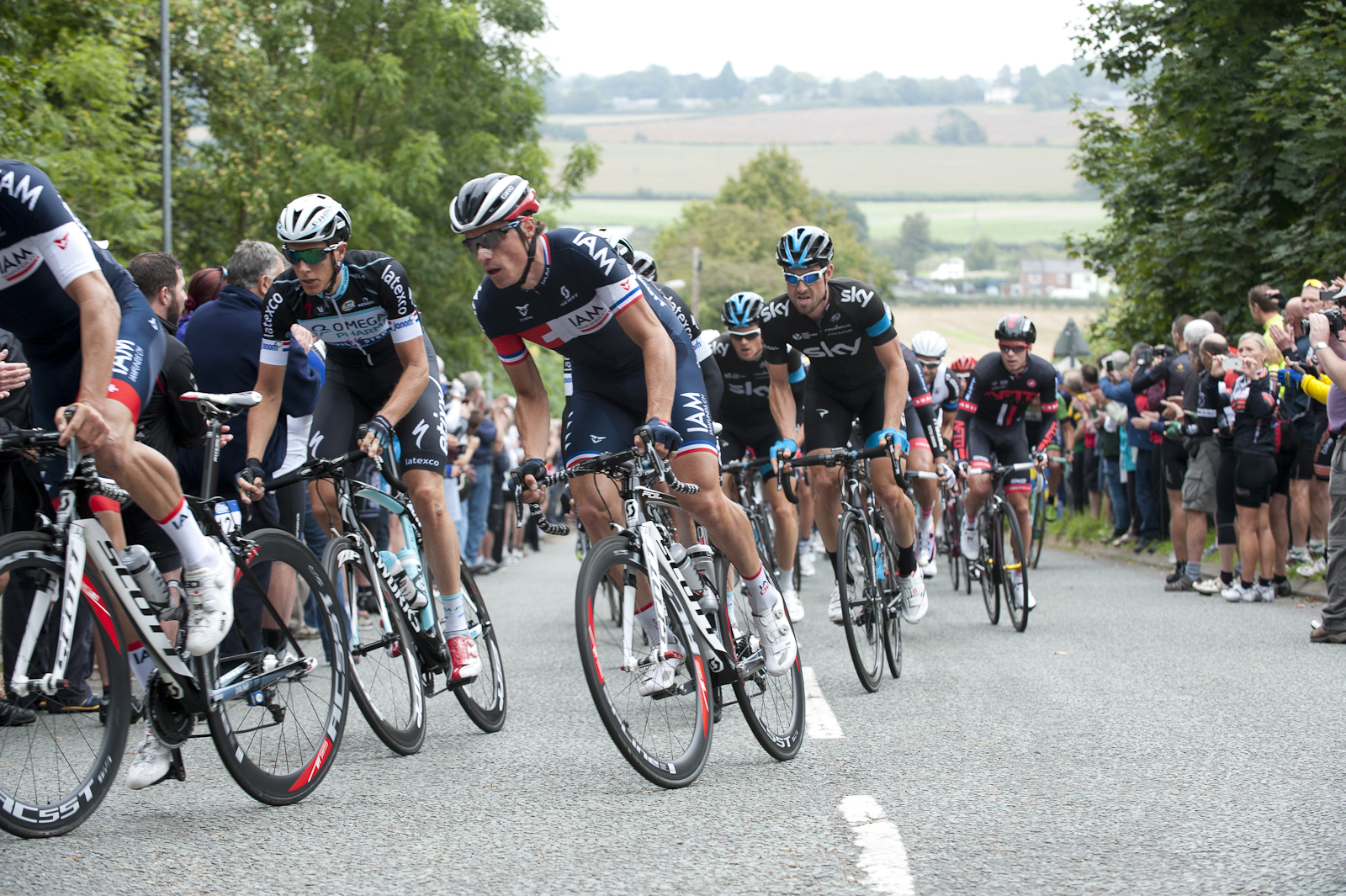 The team towing Sylvain Chavanel up, whilst Bernie Eisel grimaces behind. 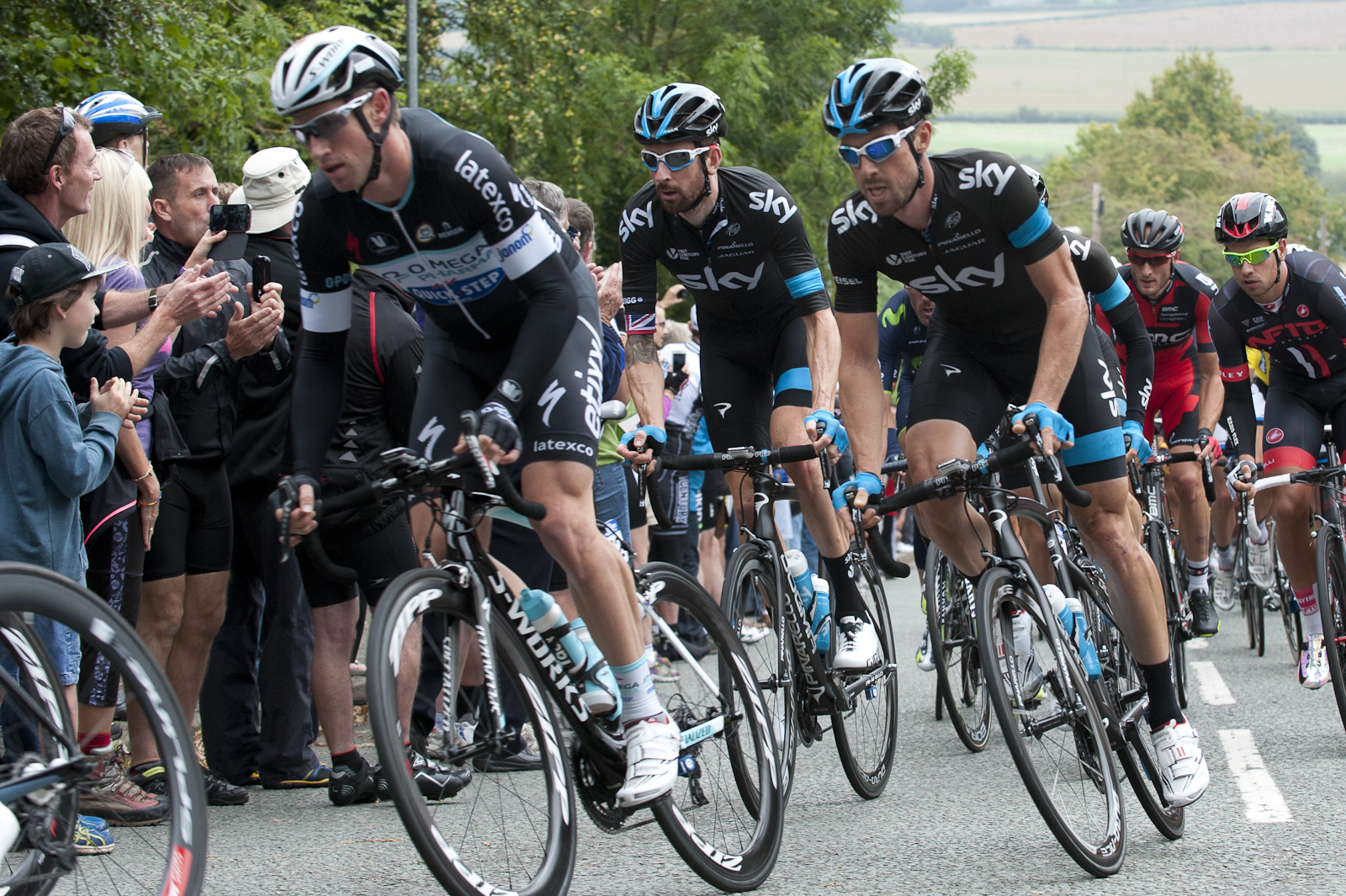 Renshaw – the day’s winner, Eisel and Wiggins all made easy work of things though.

No sooner had they arrived, and they were gone. That was it, time to pack and get to Llandudno for the finish! I rode like a mad man, all the way down Acton Lane, and sweating, put my back in the back of Al’s van and we took off up the M56 and A55!!

Along the sea front, we passed and anonymous cyclist. I’m sure that’s Chris Gregory. It was, and he soon caught us up after we parked. He’d put the miles in from Talacre…

We hit Rhos on Sea, had a piece of cake (well you’ve got to haven’t you?) a quick brew, and then the bikes were out and we were off, through over Little Orme, along the sea front and up the steep incline to the cafe at the top overlooking the sea. After the 5-7 miles(!) or thereabouts, we deserved a brew. The cafe clearly would let any old riff-raff in, as Dave Brailsford, slightly off course from Spain, wandered in looking for a brew. We offered, but he declined. Chatted briefly, I took a rubbish selfie, and he was off. 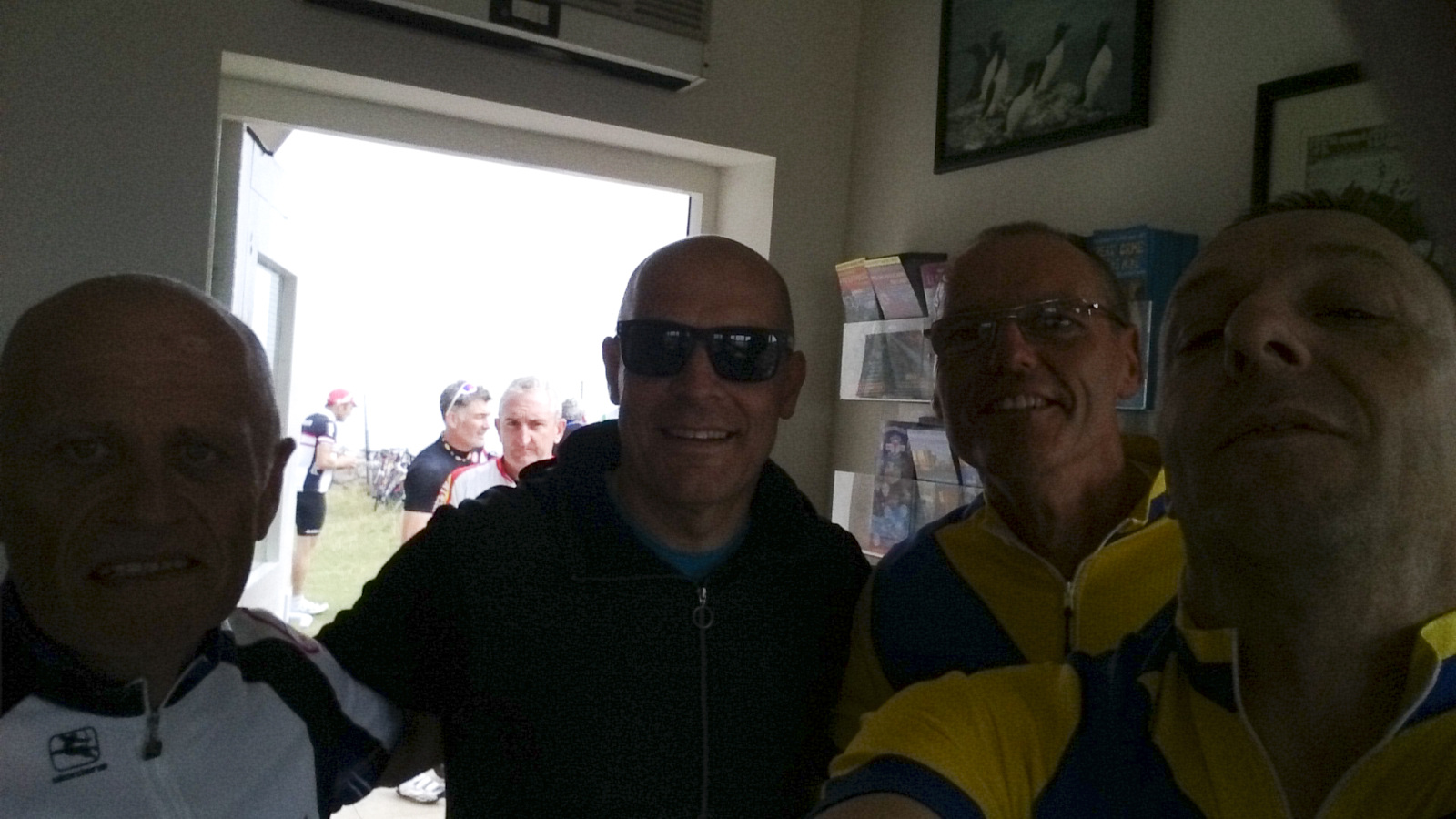 Wait, let me strain to take a selfie and fit us all in…. eeurgh (says my face).

After this, we meandered up to the KoM, the third and last of the day at just under 6km to the finish. We waited in the warm sunshine, at a fairly uncrowded Skoda KoM. 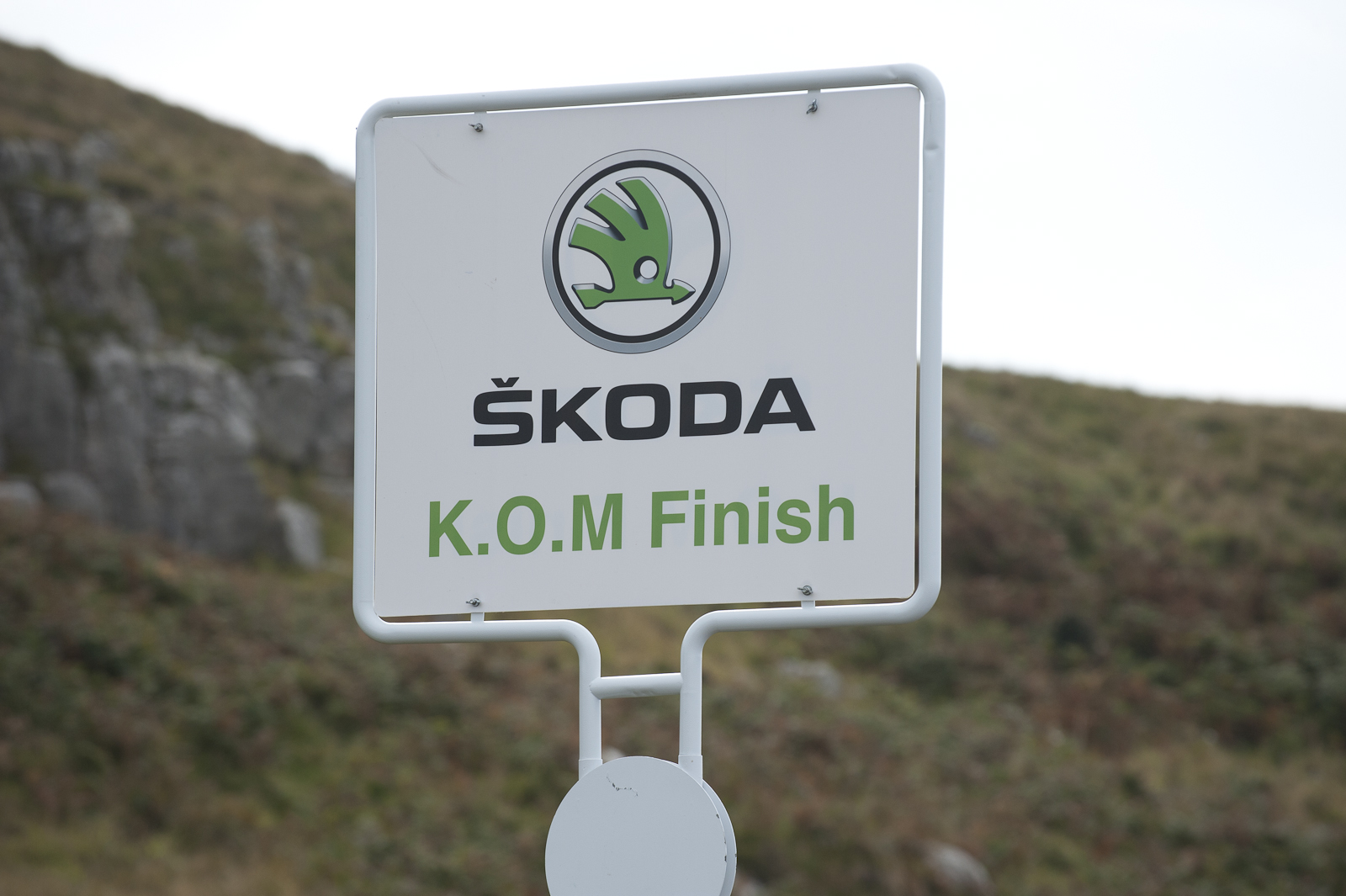 Then you wait all day for a Penny… 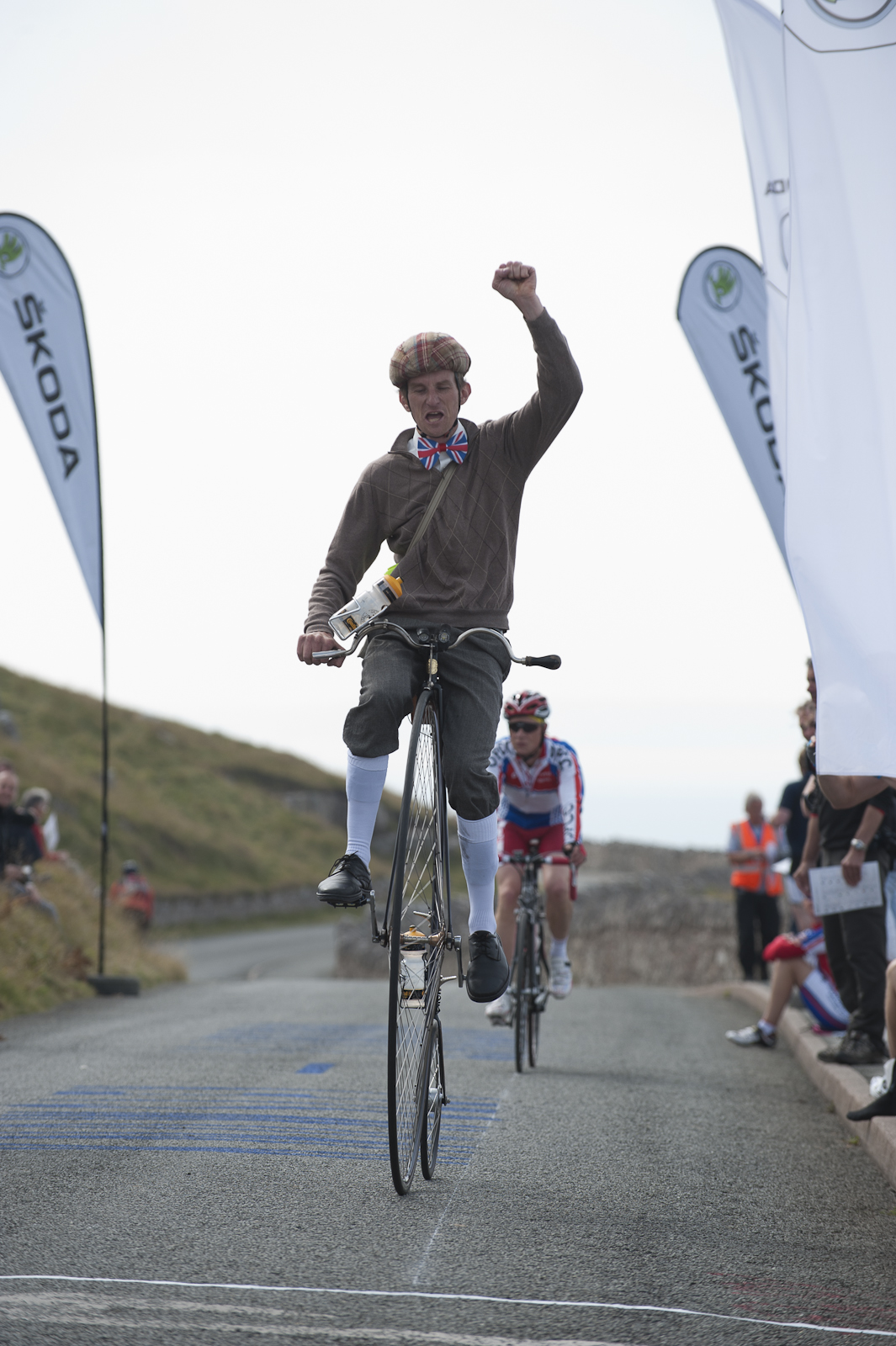 A Penny..(Farthing), being a true KoM riding up the Orme on that!

..and two come along at once.. 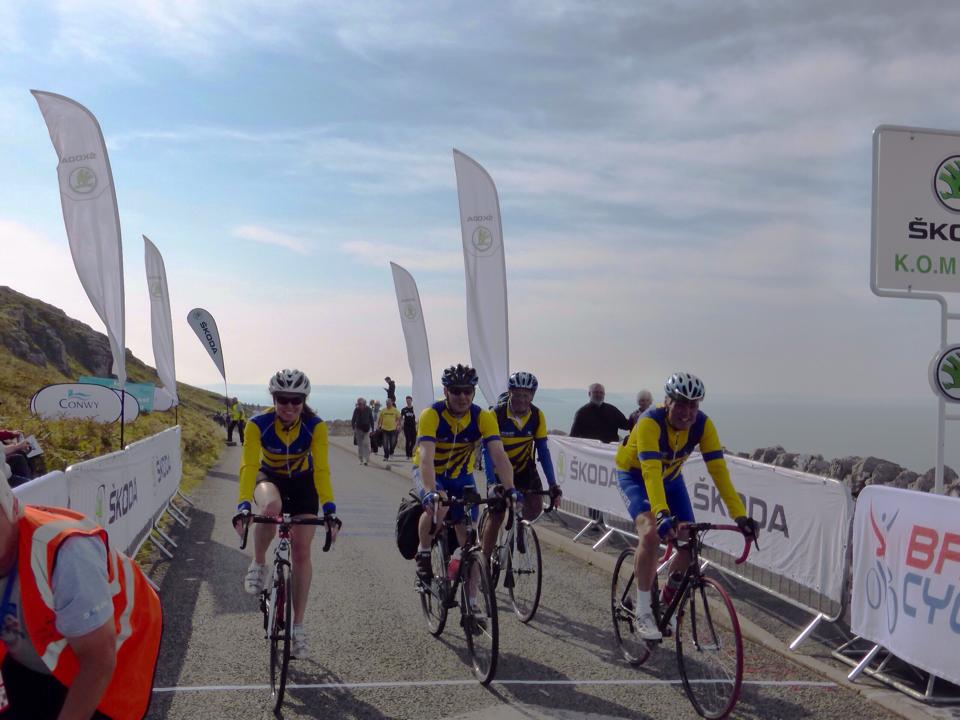 None of this messing about for the guys in the race though. 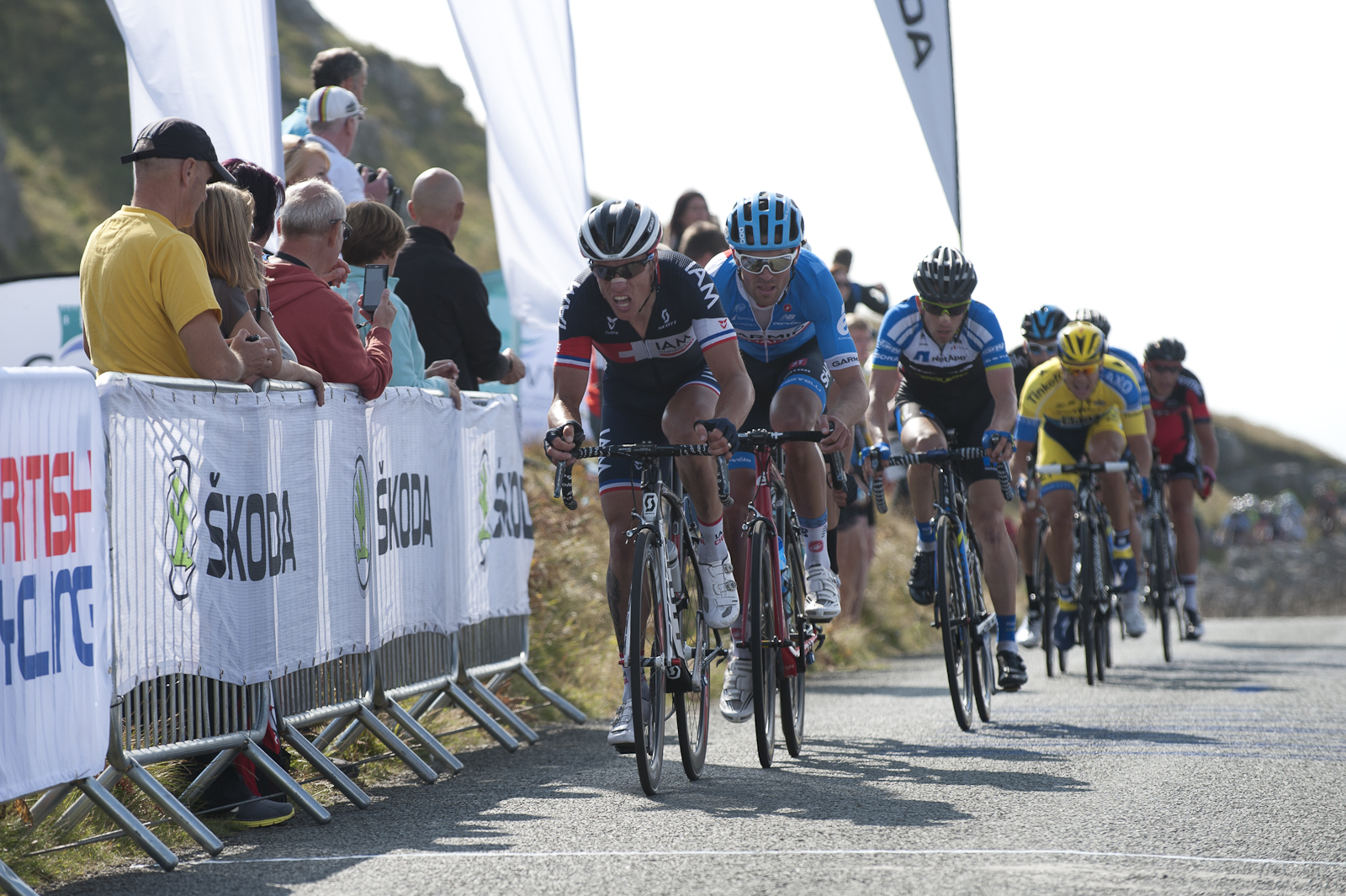 Sylvain Chavanel absolutely battered it up the hill to get maximum points on the last climb of the day. 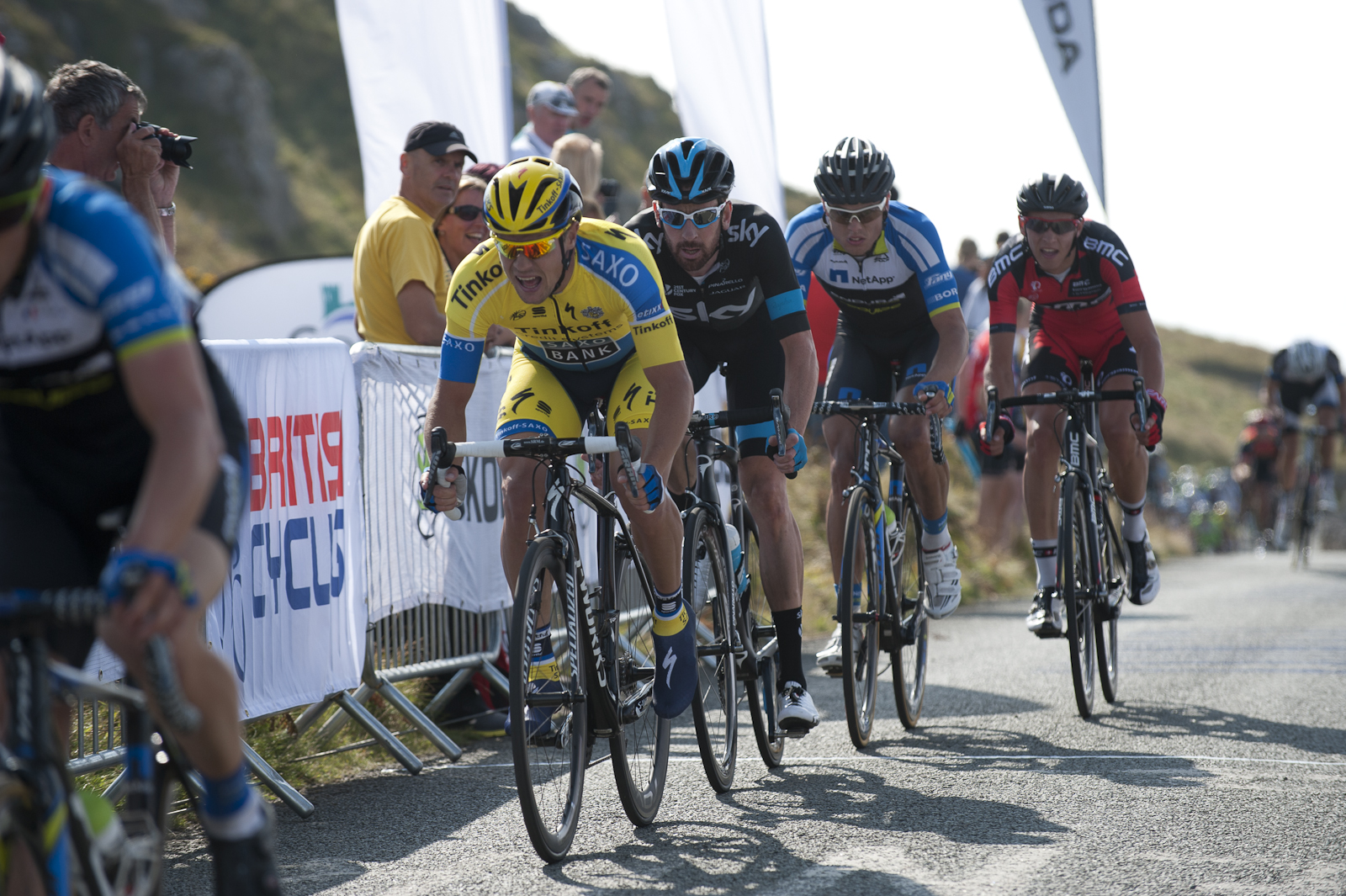 Wiggins was also not hanging around as he followed shortly, looking composed with a select group. 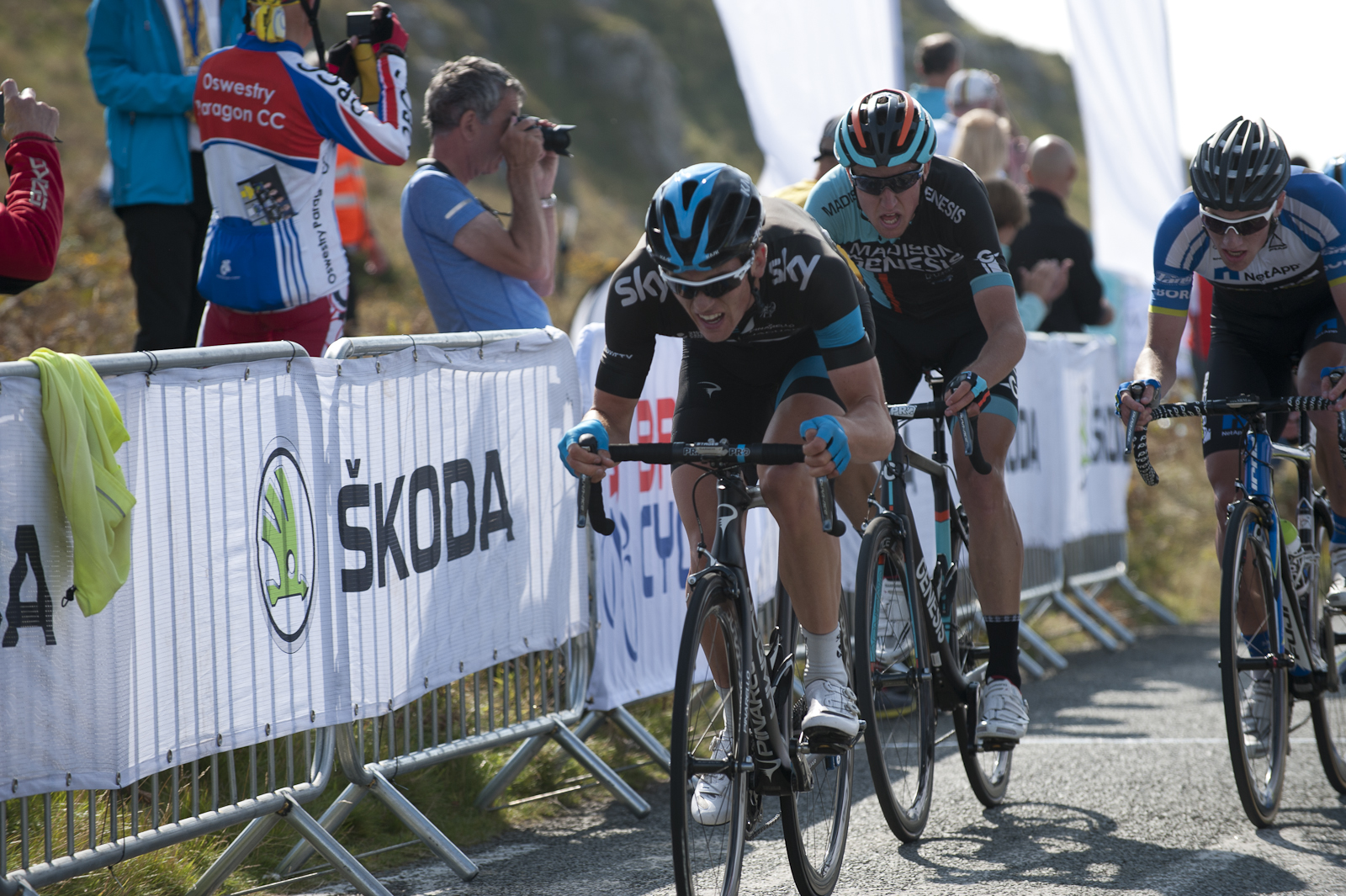 Ben Swift looked anything but composed – more like a man possessed, as he gave it his all for the minor placings on the climb. 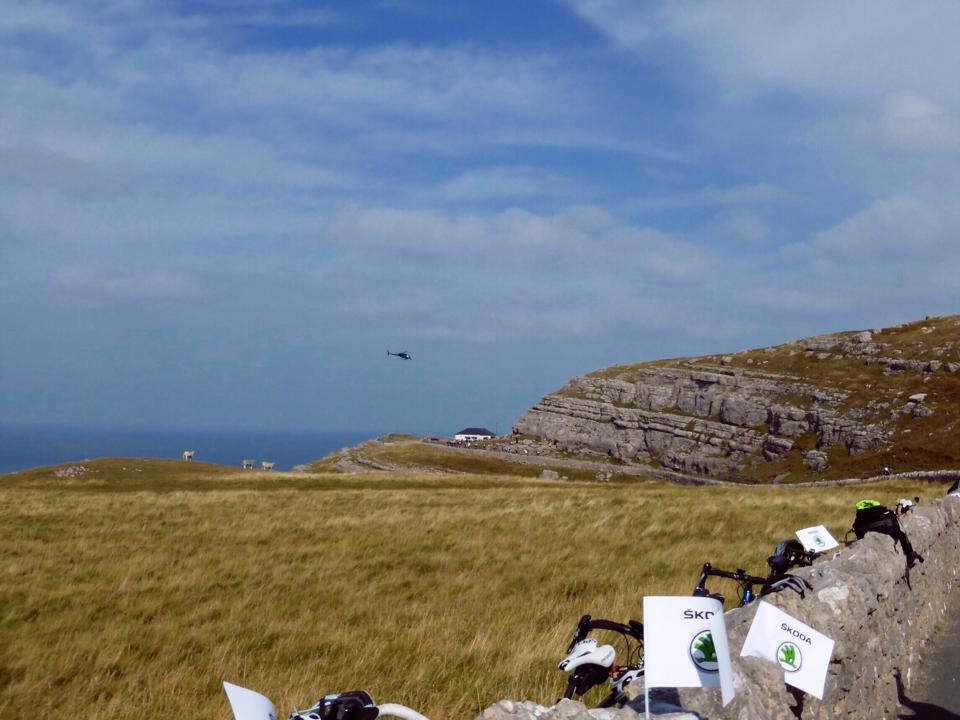 The peloton drop like stones to the finish. Photo thanks to Penny (not Farthing). 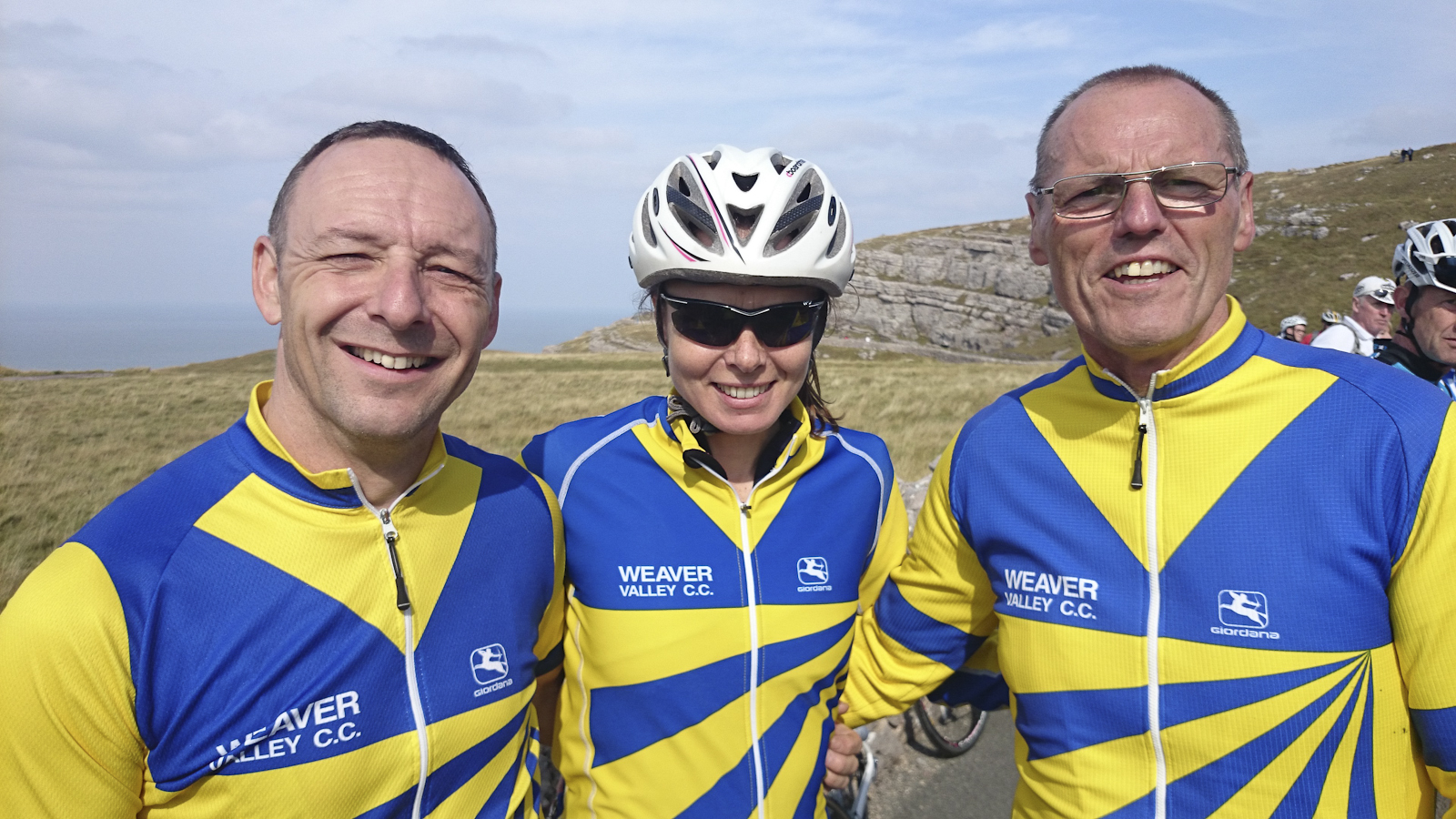 Happy spectators. Beats the hell out of working on a Monday. 🙂 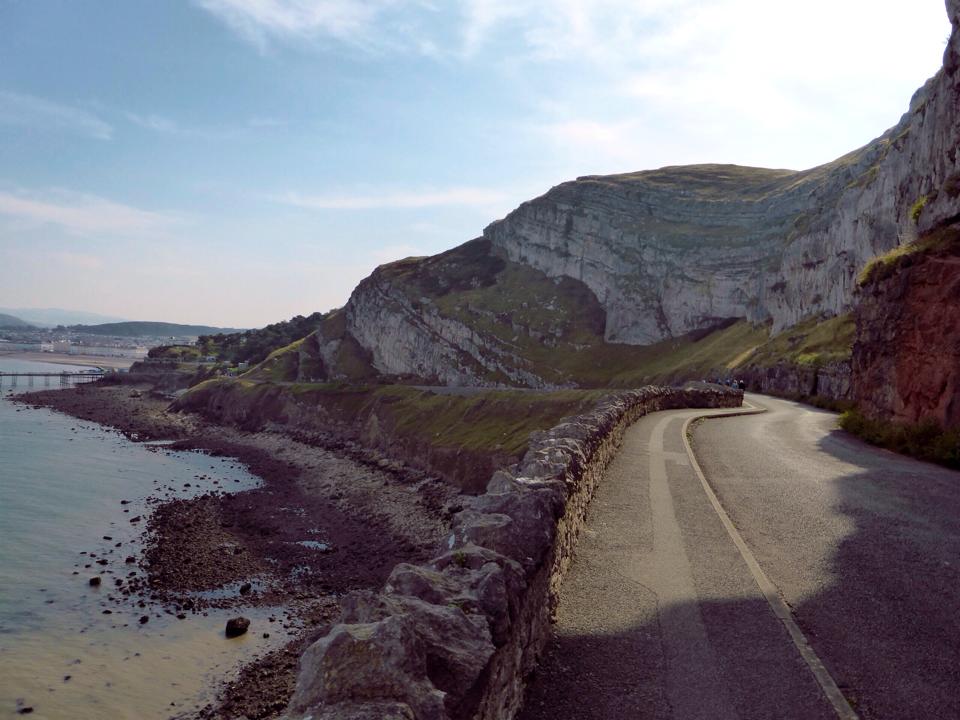 A lovely descent back down the wrong way as the roads were still closed. Photo thanks to Penny (not.. oh never mind). 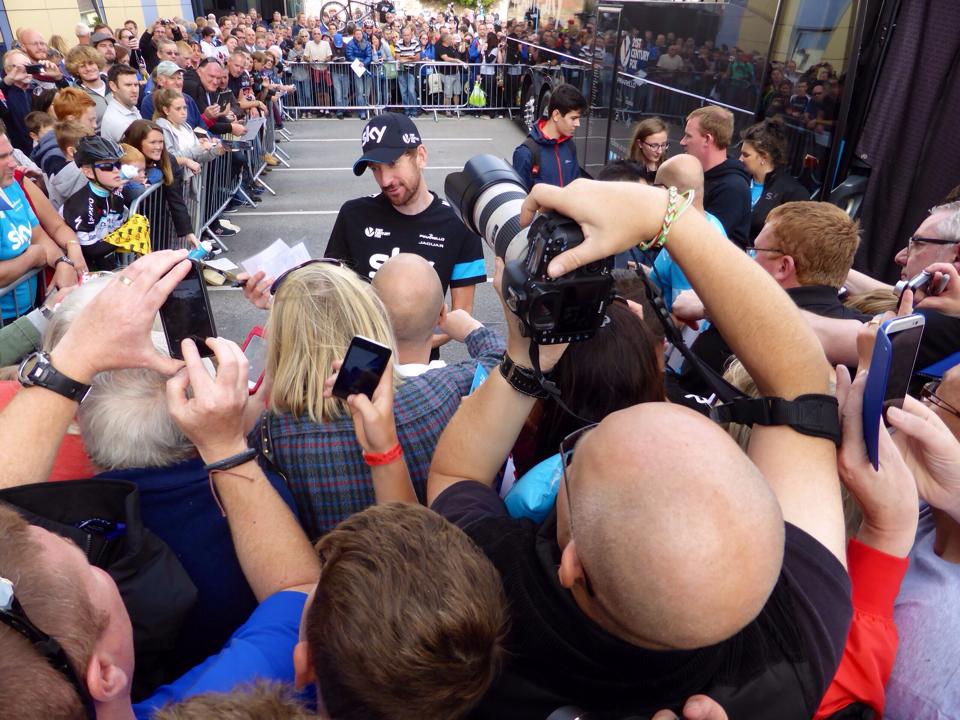 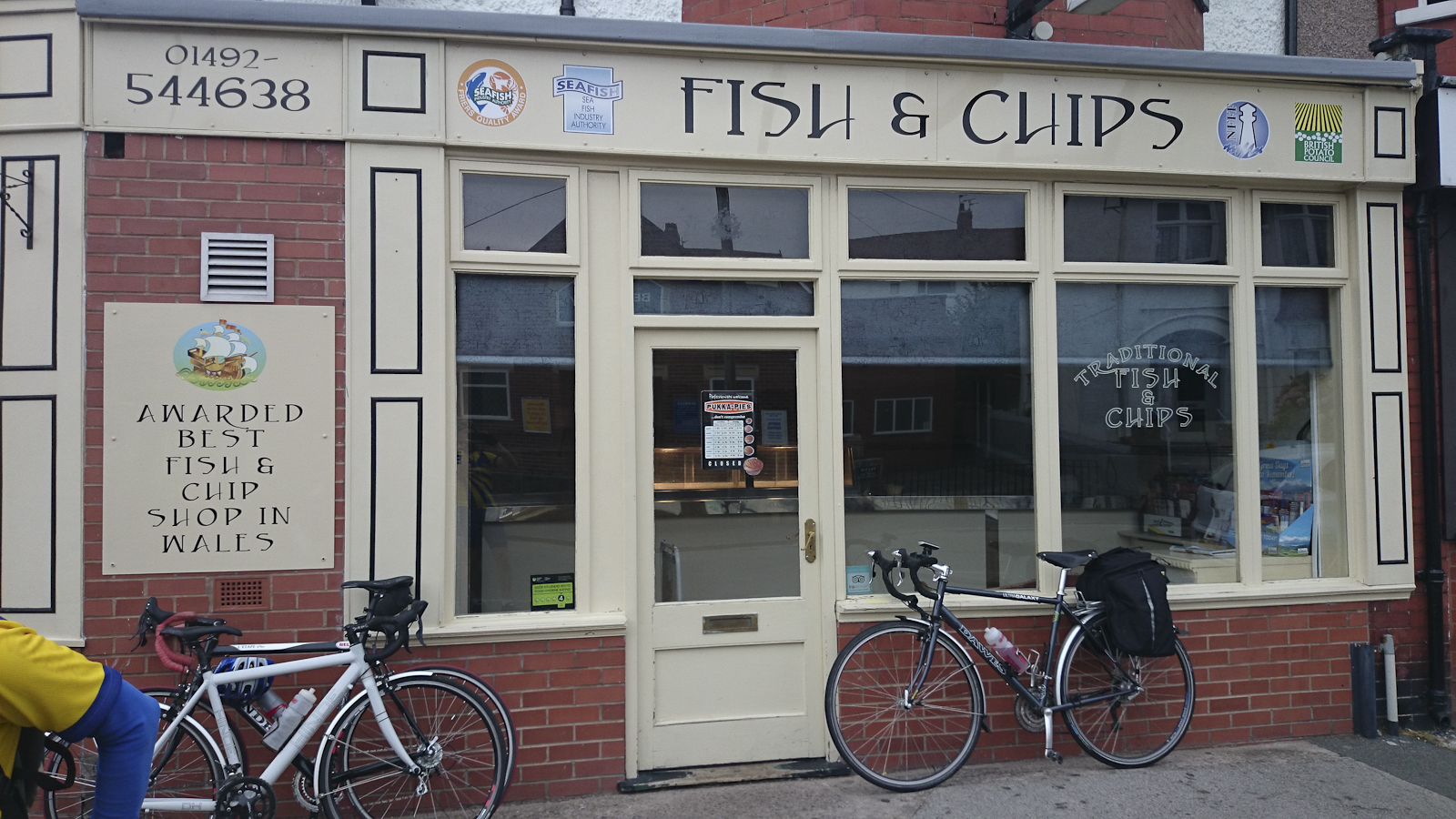 And to finally end the day with a chippy tea for the boys isn’t a bad way to spend a Monday, especially after the road miles (around 29 by the end of the day dontcha know?)

Another good day out. Thanks to Al for driving the van, Chris for being anonymous and then transforming into club kit from Alan’s spares (he’s like the shopkeeper from 70s kids cartoon Mr Ben), and Penny, for the photos, looking like a super-domestique (coming up the hill as she carried a whole deli’s worth of butties up her jersey), and making the total to 2p.