To the Jovial Lookout with the BFG

As soon as I left the house I realised I had put on the wrong base layer (that’s a vest to the older generation). I just had a lightweight one on but as it was only 4 degrees a thicker one would have been in order. I quietly shivered most of the day.

Destination today was Chirk, defined by Wikipedia as a small town in Wales and from the Spanish translation as, ‘jovial’. Well, joining in with the jollity today were Jim, Alan, Anthony, Alex, Paul G, Steve, Matt B, BFG Ken, Me, Carol and Matt E (making a comeback after a near record week long retirement).

Jim’s legs were perhaps a little tired after his exertions on the Saturday training run or perhaps he was just feeling particularly benevolent as we set of at a very nice and steady pace taking in first Whitegate and all of us up Cinder Hill like a well oiled machine. As is usual for this time of the morning, everyone was chatting loudly and happily, all except Carol. Strange! In the years I have known Carol this is the first time she has ever been quiet and it was me that had to speak. I didn’t get to the bottom of the cause of Carol’s near silence but trust that normal service will be resumed next week.

The first flood of the day was just before Tarporley, most people electing to go along the crown of the road where it is naturally shallower and less likely to be pot-holed. Even here it was nearly bottom-bracket deep. Carol, perhaps trying to give herself a jump-start rode along the edge of the lane where the water covered her feet and legs. You live and learn!

Down the hill from Tarporley towards Huxley and Carol was pedalling with a regular squelch, I tried not to giggle. Matt E turned off at Huxley to put in some sprint intervals before his afternoon weight session. Carol turned off a couple of miles later to find a launderette with a tumble dryer.

The road remained flat and was drying out as we headed to Holt although in the distance the sky was black as a black thing, an ominous sign of things to come?

After Holt came the long drag near Eyton, something to make us sweat a little. Re-grouping at the top we then had a few more minor lumps to deal with before our well earned lunch at the Caffi Wylfa. Wylfa seems to mean, ‘look-out’ or, ‘observation post’. A good cafe and well worth looking out for. It seems pretty new and the staff are nice and pleasant, the food was hot and served fairly quickly and we all got a free pint of milk, like being back at school. It is a little on the pricey side though. 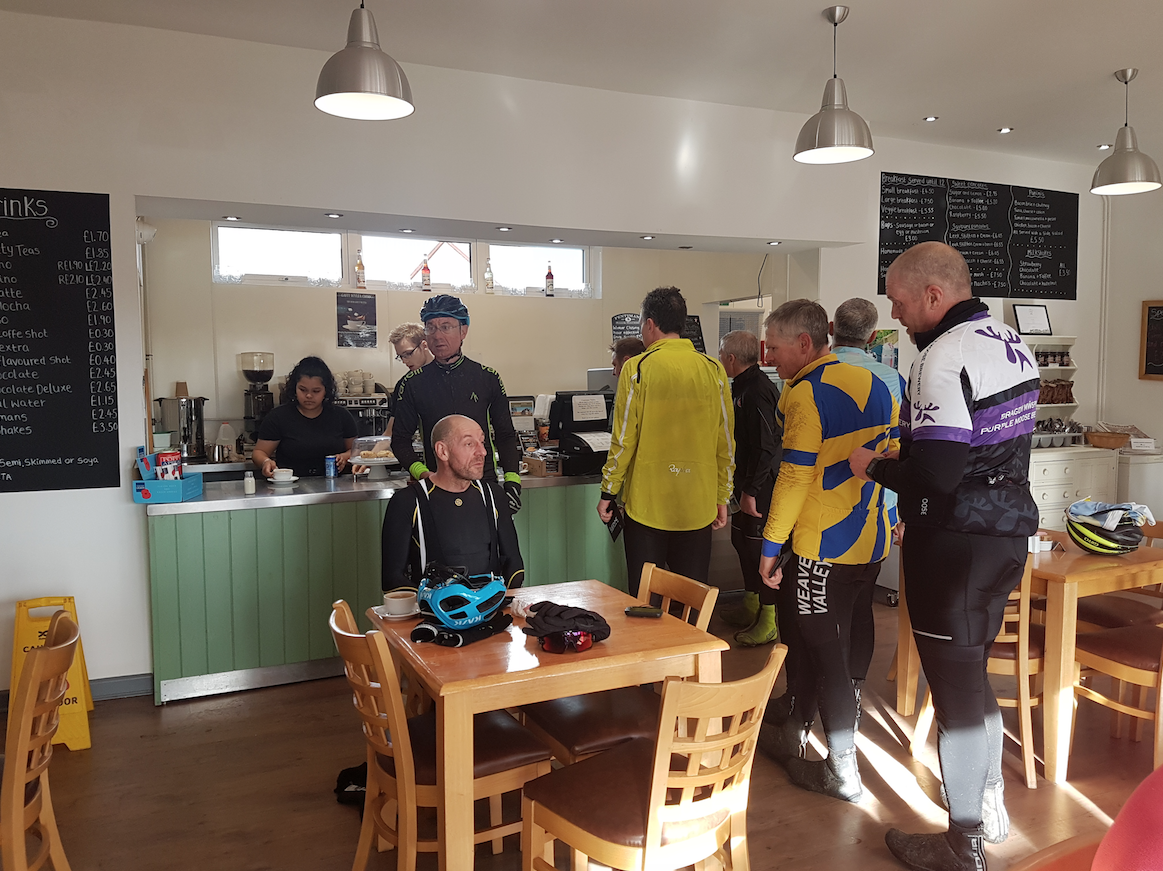 While everyone queued, Jim thought of new ways to cause pain…

It was only when he picked up his pint of milk that I became fully aware of our newest member, ‘BFG Ken’. 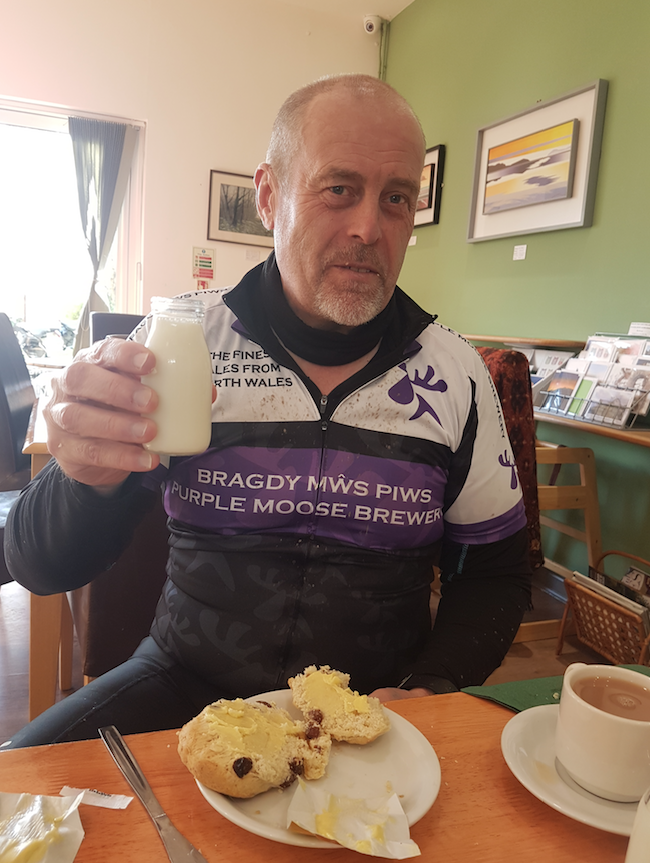 BFG Ken with his pint of milk…

Ken also announced, quite to the shock of all of us, that some genealogy work had been done and he was actually Matt’s Dad. Quite a revelation. There is a definite familial resemblance and riding style so it must be true.

All too soon it was time to get back out on the road. Down the hill from the cafe and back up a different one, cafe legs waking up.

The sky earlier had been black, the sky now could be described as uber black. Black plus 1. We could see that the storm had been where we were as the roads were soaked. It was evident we were chasing the storm so the best thing to do would be slow down. No chance. Anthony was the first to ask about caping up, it wasn’t raining though so the suggestion seemed a little early. About 3 minutes early actually as we caught up with the tail-end of the storm and stayed in it for the next hour or so. Caping up, I wasn’t paying full attention but i’m sure Alan asked if people had seen his bottom wiggle. What happens on a club run stays on a club run.

Bangor-on-Dee was quickly despatched before the long, bothersome drag towards Malpas saw most of us back off from the pace a little so we all stayed more or less together for the duration. Matt needed to get home though, like his namesake, to get some extra training in for next year.

From Malpas you get a rest for 5 minutes as the road goes down before the hill of many lumps up to Bickerton. I was warmed up by this time so actually went on the front for a while. I did, honestly.

A nice sunny day now, it could have been summer if it hadn’t been 5 degrees. Some of us took our capes off before the Bickerton road took us towards Beeston and then Tarporley. The drag up to Tarporley from Beeston is definitely in my top 3 least favourite bits of road, it’s now one of Paul G’s least favourite too as just before the top a giant bird deposited a week’s worth of white pooh all over his black cape. Not a good look but apparently he is destined for lots of good luck.

Re-grouping in Tarporley and BFG Ken said for us to not wait for him as he needed to go dream-catching. We went through the Tarporley flood again before re-tracing our steps to Eaton, Oulton and Whitegate, still all as a tight-knit unit. Jim and Alex turned left at Whitegate, the rest of us towards Hartford where Anthony went one way, Alan and Paul another and me and Steve a third. I said goodbye to Steve at the old iron bridge in order to put in a little extra loop before heading home with 102 miles covered.

Thanks as usual to Jim and everyone for a great day out, always challenging, never not fun. Caffi Wylfa is definitely one to put on the runs list.