After last night’s Weaver Valley track night my legs were decidedly heavy and I went in to my first track league of the season with some trepidation particularly so as this was round 7 and so many other riders would have been warmed up through the previous rounds. I was however buoyed by the fact that Paula and Kate came to watch me; there is nothing like an audience to make you sit up and pay attention.

Things didn’t start too promisingly for me as the 10 minute warm up I endured was super fast, after 4 laps I was eyeballs out, desperately trying to cling on to the wheel in front. Still, it cleared the lungs out! When i climbed off I was coughing like I had an 80 a day habit.

My first event was a 16 lap points race, with a sprint every 4th lap. Surprisingly I was up amongst it from the off, placing in all 4 sprints to give me 3rd place overall. Not a bad start but I was absolutely turned inside out and thought that would be me done for the evening.

Event 2 (not mine, the first race of group 2), started fast and after a couple of laps someone put their pedal through someone else’s front wheel and the was a huge pile up, at least 6 riders came off, broken bikes and wheels. That crash cost thousands. There were no major injuries except 1 rider who had attention for a long while and eventually left in a wheelchair, smiling but with his leg out straight. There but for the Grace of….

My event 2 was a 12 lap course des primes. Someone attacked from the front and stayed out there for a couple of laps getting points. I let other riders bring him back before following a lad from Sportcity Velo and pipping him for a sprint and much to his delight I did the same thing on the next lap. I sat in for a few laps, getting myself back together again before the final sprint.

The lad from Sportcity was just ahead of me, looking around and attacked with a whole lap, on the finishing straight I just managed to come around him taking the points and the win. Delighted. Result! 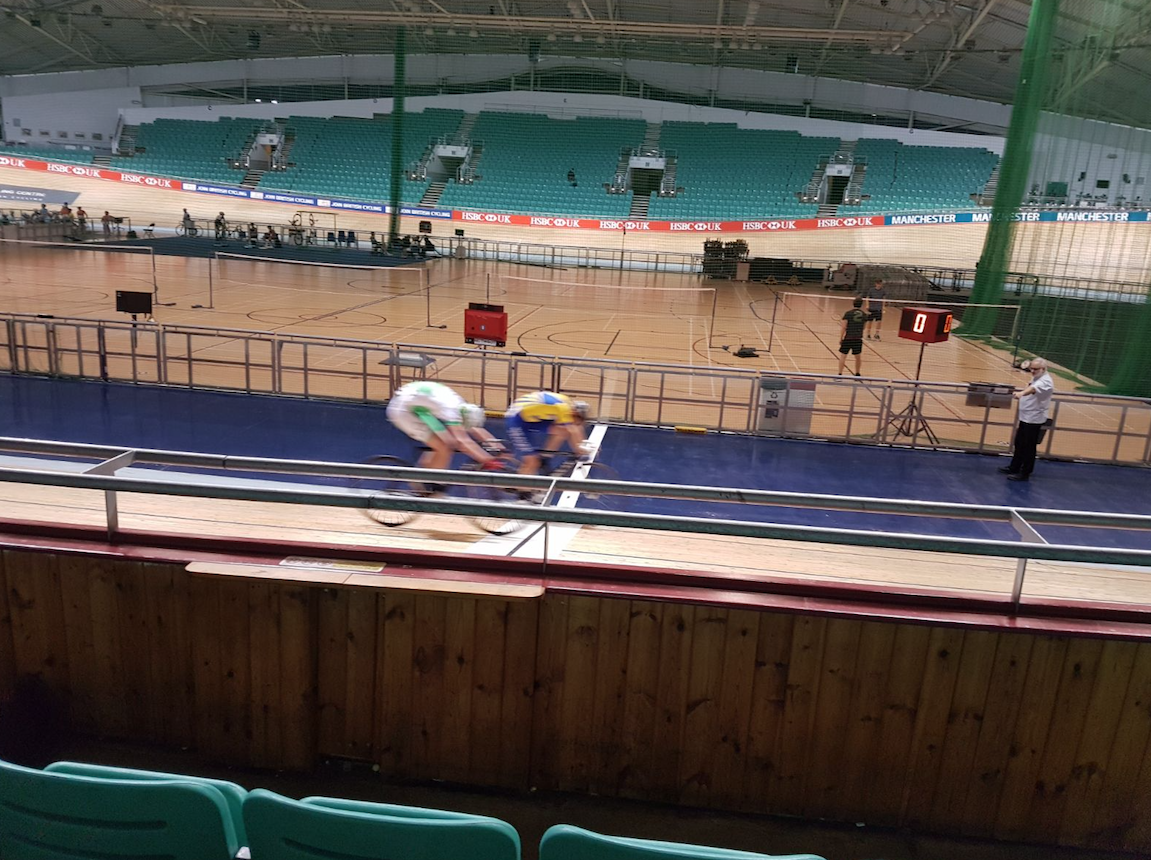 His lunge was much better than mine!

Next up was the Scratch Race. A young girl got herself on the front and stayed there, each time someone tried to get by her she sped up, wasting herself. Eventually with 2 laps to go the sprint was wound up and I was not quite able to get around a young fella so I came 2nd. I was completely shattered by this point and needed to go and have a lie down.

As the earlier crash and track repair had taken up so much time some races were cancelled which meant that my final event of the evening was the Devil. I stayed up in the first 3 and so kept out of the surges at the back which is the thing that really saps your strength. After all too soon I looked around and saw there was only a half a dozen of us left, after the next sprint there was a slight easing in pace and I attacked hard, expecting a couple to come with me, it never happened though, I was head down, looking between my legs expecting them to bridge over to me but I managed to stay away for a lap and a half and take the win!

So, first night at the league was great. Spurred on as I was my by 2 good luck charms. MRTL; highly recommended.

Track (race)
Long Ride to Loggerheads. Or not.
To the Jovial Lookout with the BFG