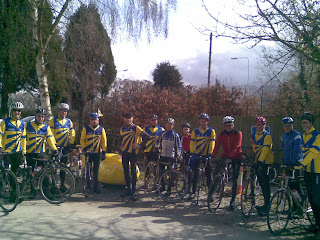 Well it must be spring, because we’re setting off at 9.30 on Sundays now. I know the “old” diary says 10 a.m. and it said 10.30 in the Guardian but they’re all wrong and we were right. This confusion might explain the lower than normal numbers out for a ride today – probably 12 or so of us and a very nice civilised group we were, with no-one sprinting off the front or mixing it, much to my relief.
Richard led and as you’d expect from Richard, as the ride was listed as going to Two Mills, he set off in the opposite direction and took us via Oulton Park to Beeston for a few extra miles – then on a circuitous route round Chester and along a very windy river where we had a master class in riding in echelons.
Anyway eventually we made it to Two Mills where we met Dave Astles, Gareth and Emma, Keith and Jed, all of whom had ridden there under their own steam. And then home the direct way, with Jed zooming past us periodically in his Quest, only for us to then overtake him on the hills. A special mention to young James with dad Andrew who last week rode the furthest they’d ever ridden (60 miles) and this week rode even more, 70 miles – James looked remarkably fresh even at the end whilst Andrew was looking a little more weary – but that’s fatherly devotion for you! All good training for their planned Coast to Coast ride in May. Thanks Richard an enjoyable ride and it was especially good to see John Crystal out again.
Eleanor
Road Runs
Lakes Weekend 20/21 March
Delamere 3 April