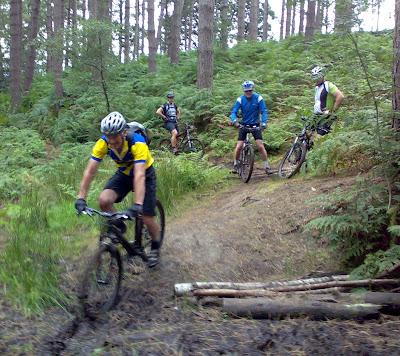 Despite the earlier start time of 9.30am and many of the regulars being away or otherwise engaged over the bank holiday weekend, nine of us had a bright sunny morning around the trails of Primrose Wood. Good to see John from Sandiway out for the first time – I don’t think we scared him off yet! The Easter bunnies had been out and laid a few eggs around the route. James and Andrew Risk are now so keen that they even completed this 3 hour off road ride ahead of the Ron Sant memorial 43 mile road ride on Sunday.

We tried out a few newly discovered trails on the way across to Primrose Wood while Steve M fixed a puncture. Later on, Rob’s mate Steve (I think that’s his name) managed to destroy his rear hanger so Rob did his speciality singlespeed conversion – if it’s good enough for Cader Idris!

Bacon and egg batch back at the cafe before heading back along the Whitegate Way with John and Kev C. A perfect warm up for the Ron Sant ride the following day – thanks to Paul Lawson for organising that and devising such a quite route, although the mountain bike would have been handy in places where the mud on the roads was as thick as it had been in Delamere.

Off Road
Spring has sprung
Llangollen and the Berwyns 17 April