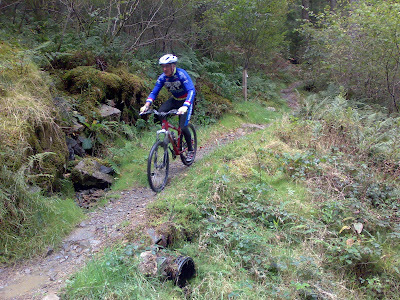 Chris tackling the Tawr Trail at Coed y Brenin. Nine of us rode this trail on Saturday morning; much rockier and trickier than I remembered when it was the Red Bull. Unfortunately Jack C fell and gashed his knee which required five stitches, so he and Kevin C missed the MBR trail which we did after lunch. There are some really nice flowing sections on this now. 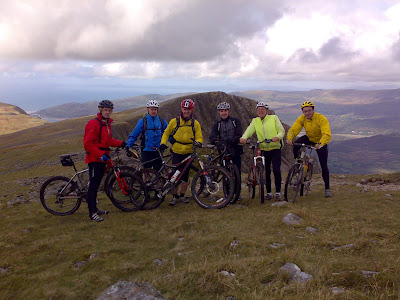 Sunday saw seven of us ride (and push) to the summit of Cadair Idris (893m or 2930′). Picture shows us just below the summit with the Lleyn peninsula and Barmouth in the background. From the car park at Minffordd we headed along the quiet lanes past Tol y Byn Lake then over to Llanfihangel, up the valley to the pony path then the final rocky stretch to the top. We met another group from Frodsham, although they shot off ahead for the descent with their body armour and a more downhill attitude than us. 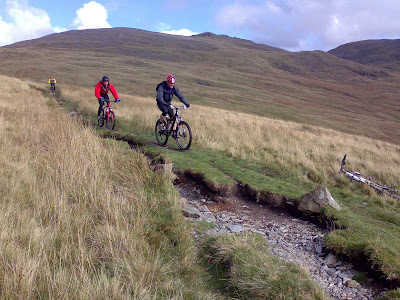 The descent of the pony path was just reward for the gruelling climb. Photo shows Dave leading Jack and Kevin with the summit in the background. No serious injuries on the descent, but a couple of fallers on the rocky upper section. The lower slopes were super fast gravel tracks; 2 hours up, 30 minutes down!
Check your diaries and let me know how mid Feb sounds for the next weekend in the north Lakes.
Off Road
Delamere Saturday 19 Sept
Brownbacks Hope Series Lee Quarry Race