This is an updated post to remind any club member who is interested, that we plan a trip to Mornant, in France during July (10-14th). Register your interest quickly though. Final numbers will have to be submitted for the 15th March.

Why Mornant though? Well, this is best summed up by Paul Lawson, who met with the UCM, both here and in France some time ago…

A little bit of history on our links with Unoin Cycliste Mornantaise…….
In the summer of 1997 to celebrate 10 years of twinning between Hartford & Mornant members of UCM decided to ride from Mornant to Hartford (due to time constraints some sections in France were driven in the support vehicle). Mornant lies about 15 miles south west of Lyon. Graham G. was contacted by the twinning committee and asked if WVCC would like to join them on the last leg of their journey from Ludlow to Hartford.
On a week day morning Graham, Simon Doughty and myself were dropped of by Graham’s family in Ludlow where we met UCM outside their B&B. We rode north on a pleasant summer’s day stopping in Wem for a cafe break. After a brisk 76 miles we arrived in Hartford to a welcome fit for Tour riders – French and English families filled the main road in Hartford outside the tennis/bowling club and we rode down the centre of the road linking arms with all 7 seven riders abreast (I doubt you’d ever get the traffic to stop these days).
We rode together once more on the WVCC club run that weekend before our new friends returned home. The following year (September 1998) we arranged to for WVCC to stay with UCM in Mornant for a week of cycling. Myself and Chris Mullin (a small but mighty contingent) flew out to Lyon and had the cycling holiday of a lifetime. We experienced fantastic hospitality, generous hosts, great food, beautiful quiet mountain roads, hot weather and at the end of the week competed in an open 9 mile hill climb on the Saturday then a road race in Limonest on the Sunday (6 ascents of Mount D’Or).
I stayed in touch with Jean Francoise (club president at the time) and used to phone him on Christmas Day for few years but lost touch many years ago with both of us moving around.
If you want to experience true French hospitality and cycling culture then get yourself to Lyon in 2015. 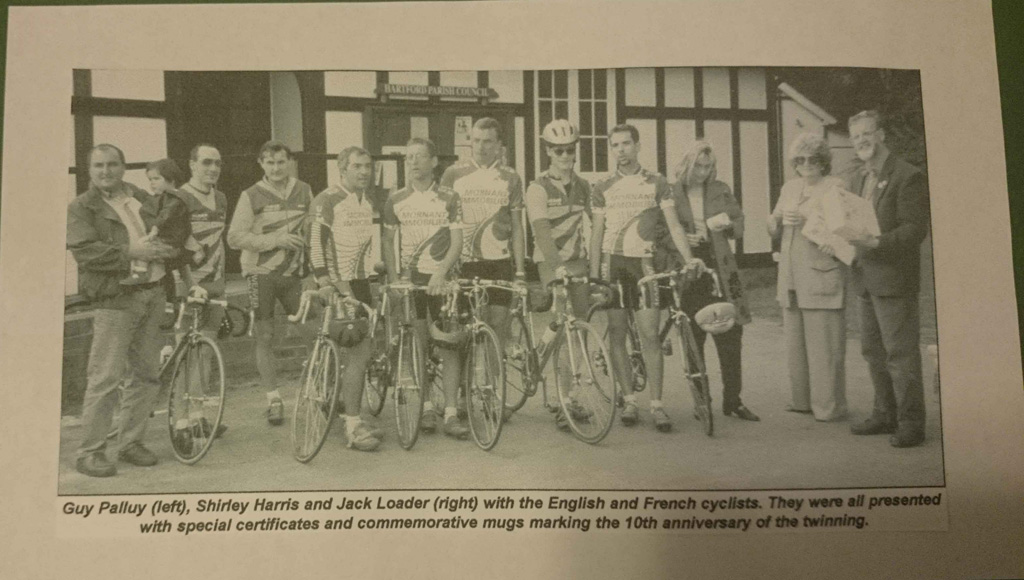 ..and if you don’t know where Hartford’s twin is, well, here it is…

If you are interested in joining a group to visit in July, also with the potential of grabbing some of the TDF whilst you are there, contact Graham Gregory or Jim Williams.