Can I just say before I continue, that is Lazies up there in the title, it’s not a typo with the potential of belittling our heroic female members on this International Womens day. Thanks to Andy Beswick for a much improved ride title. In the end there was 11 of us rocked up to the forest, and we split into 2 groups, this being a ride report for the what was intended to be a starters session. Except we had no new joiners, but did see the return of Andy and Karen Boyle for the first time in a while.

After the fast group roared off, with Paul Harding riding a new, less than subtle bike, the sensible lot, consisting of myself, the Boyles, Andy Beswick and Dr Giles pootled off towards the marked white trail, which soon proved a bit dull, so we struck off into what was intended to be be a nice intermediate track. Unfortunately this was comprehensively blocked by some massive fallen trees and large swampy puddles so we ended up carrying and pushing until we were back on metalled fire roads. This did however provoke a bit more ‘lets see what’s down there’ riding and we discovered a new really tight, twisty rat run round a small mere. Not a track for bombing down flat out, but a really techy, twisty affair to be ridden without putting a foot down or getting fashionably wide handlebars wrapped around a tree, definitely one to repeat in the future. This general pattern of singletrack follows fire road continued for an hour or so until Andy, (Boyle) suffered the only puncture of the day forcing us to stop for a breather and photo. 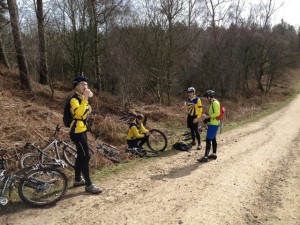 As it happens, we were having such a good time there was no other pictures taken.

From here we worked our way back towards the Cafe for our arranged meeting and lunch stop, with a trip up to the Old Pale masts for those who fancied. We had a little conversation at the top about being careful of other forest users on the way down, keep the speed sensible, don’t want to risk scaring any horses or dogs, the usual responsible attitude, until Andy, (Beswick this time) suggested he was racing me, which put paid to that. I’d have beaten him too had not run out of braking room on one corner and ended up in the scenery!

As a beginners ride, it didn’t really turn out the way we’d planned, but as a bike ride it was ace. Glorious weather and even a covering of trail dust on my bike when I arrived home, (plus some mud, there’s always some of that to be found)

We’ll promote a trip like this again in a few months, and hopefully then tempt a few more road only members out with us. Next scheduled trip is on 21st March, an ‘away day’ but unfortunately I’m not able to make that one. There was a suggestion to take a trip to Cannock Chase, which won’t take much organising or navigating so I’ll send out an e-mail to that effect later this week. And remember, although we specifically aimed this weeks ride at beginners, our Delamere trips particularly are always mixed ability and inclusive, please don’t wait if you want to join in.