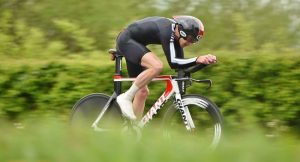 Today was the M&DTTA 50 mile champs incorporating the WVCC club champs.  A large field of 105 riders was on the start list and WVCC had 5 entrants.  First off was yours truly feeling OK but a little worried after spending 25 hours on planes this week flying to San Francisco on Monday and coming back through Thursday night.  I also upped my usual 50 gear from 100″ to 106″ (59 x 15) to see how my legs would cope with the big gear as next week I’m riding the BDCA 50 at Etwall which is the fastest course in the Country.  Surprisingly I felt really good and rode a pretty even pace clocking 59:15 at 25 miles and just sneaking over the 25 mph barrier at the finish with a 1:59:58.  I was more than happy with this ride despite it only securing the silver medal in the club champs.

Next to start was Caroline Fearon who’s main aim today was simply to finish as she only made 30 miles a few weeks ago in the Warrington 50.  She went through 10 miles with a 28 minute ride so quicker than her 10 time in last weeks club 10.  At 25 miles she did a 1:13 so still going well.  By the finish she nearly broke the 20 mph barrier with a 2:31:01 so she was very happy with her ride.  The fastest lady in the event was Ruth Gamwell with a 2:12:00 who also took the M&DLCA champs on the day, Caroline finishing 12th.

We had a bit of a wait for the other 3 WVCC riders but reigning champion Alistair Stanway was next to finish with a disappointing 2:07:10.  Al wasn’t happy as he’s putting a lot of effort into his training but this was several minutes slower than his usual time for the distance.  However if your not feeling 100% then 50 miles of intense effort will find you out so a week of rest will probably give his body a chance to rest and re-build.  The 100 is only 2 weeks away so it’s a time to re-charge the batteries as training is not always the best way to improve. A 2:07 on Cheshire takes some effort and it earned Al a bronze medal in the club champs.

Man of the moment Jimmy Williams put in yet another best ride for over 25 years with a superb 2:07:56.  Just outside the medals but getting faster and stronger all of the time and remember that Jim is putting in mega miles for the 24 hour so he is riding tired all of the time.  I recon he will be absolutely flying in September when the 24 hour is out of the way and he slashes his high mileage (so make sure you do Jim)!

So who was the club champion???  Last year Iain Young beat the magic 2 hour barrier in his first ever 50 which is amazing.  Geoff Mullett has been flying all season so far at the shorter distances and as a triathlete he has great speed endurance.  This showed today as he went through 25 miles in a long 57 and despite hitting the wall on the homeward leg the tailwind finish enabled him to still take the win by 48 seconds with a fantastic 1:59:10.  So not only did he match Iain’s feat of 2015 but he became possibly the first novice ever to take the club 50 mile champs (unless you know different…..).

National 100 mile Champion Charlie Taylor of Team Bottrill made mincemeat of the field with a stunning 1:43:35 beating the second placed rider Mark Turnbull by 4 minutes.  Not bad 29 mph average on bumpy old Cheshire.