A sunny day with a breeze met us at the legion today. A refreshing change for most from the heat of this week. The long run were off to the unexplored unknowns of North Wales (well, near Wrexham anyway).

We were on a different journey, and one which would see some reversals of routes. Alan clearly had a plan.

Today, Carol was still recovering from a heavy cold (along with her usual few pints of Guinness and 40 fags a day), so she opted to come with us on the short run.

We left and headed towards Whitegate, with the hope of heading down Clay Lane to see the magnificence of the new bridge over the railway.

We headed up the first hill, where Carol coughed and gasped for another Mayfair Superking.

So magnificent was the new bridge, that no-one noticed or commented about it.

We did comment though, on Dave being out after his fantastic 24 the previous week. He was still recovering, and entertained us with his stories of pain, sleep deprivation, and desperation. Mmm, Time Trialling is fun…

We headed backwards today, reversing our normal route home from the Ice Cream Farm. We climbed up Bates Mill Lane, which was pleasantly taxing and veered left at the top to part circumnavigate the bottom of Beeston Castle, and then headed towards the junction where the Bickerton Poacher is. We stopped to re-group in the car park, where some were disappointed that we weren’t going to the pub.

Nevertheless, the alcoholics amongst us soldiered on after Carol put out another fag, and we headed in the direction of Hart Hill, following Leader Al’s excellent directional commands.

We all made easy work of Hart Hill, and headed down, with Al stating that we were turning right at the junction at the bottom, and that he’d be there waiting.

We set off, with Dave F off first, and me freewheeling after to witness his legs spinning at 200rpm, just to see if his knees would explode at some point. We shot down the road, and looked back as we got to the Dark Lane junction near what we thought, was the bottom. We stopped and waited, but no-one came. Dave was starting to worry (as he is a sensitive and delicate thing), so we turned back and climbed up the hill, before realising which right hand turn Al meant. Oops. (Lesson 1. If the leader of the run gives you direction and says that he’ll be at the junction, it’s best not to tear off downhill first, and a much better idea to follow said leader).

We soon got underway though, and as we pulled up by the Ice Cream Farm, my phone rang. It was a call from Al. Worried, like you might be if you were called to the headmaster’s office, I rang Alan back. To my great relief, he’d just phoned to say that they had all just arrived at Old Ma’s. We pressed on for the 1 mile required, and pulled up as the group were all in the queue or sat down.

Dave blamed it on me, and I blamed it on Dave. It was clear that this meant trouble, despite Al’s sunny demeanour.

We sat down outside to wait for our dinners after I had convinced Steve (who was at the front of the queue) to order my beans on toast, tea and cake.

We had a couple of tables, but a crew of Liverpool Century riders were also out at the cafe. Al strode purposefully out, and with an air of disgust, sat down with the Liverpool Century guys and asked if they wanted a new Club Runs Captain, as he was on the market for the right transfer fee (I didn’t hear what the fee was, but it involved something to do with a Mary Berry recipe or something). 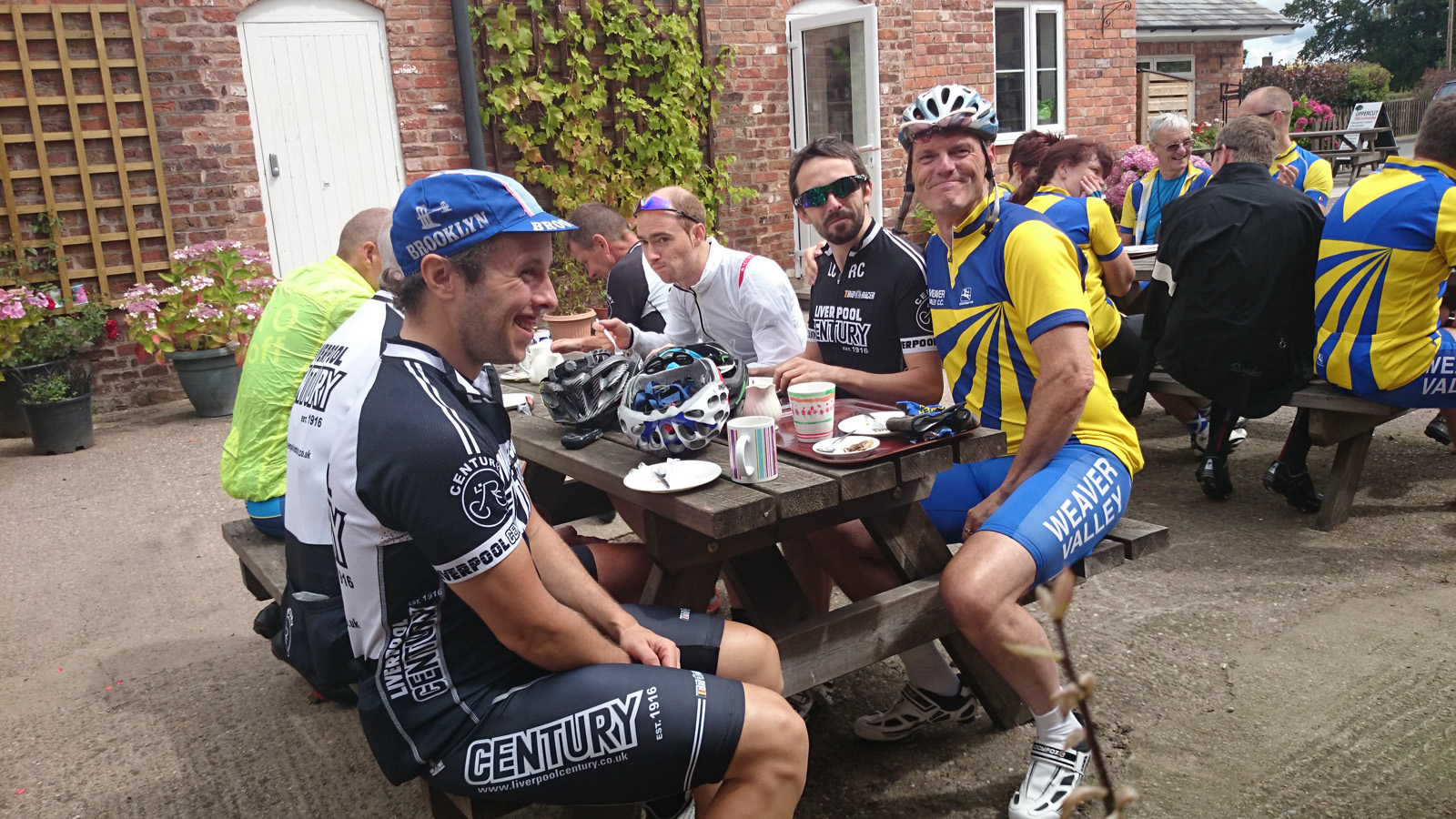 Al, so disguested at his team orders being disobeyed, defects to Liverpool Century… Sorry Al, we didn’t mean to ride off… 🙁

As my cake had come first, I though it better to show some subservience, and asked permission to eat my cake whilst I was waiting for my beans on toast. Fortunately, Al agreed, and I think I prevented the imminent departure of our Club Runs Captain.

Din dins then arrived, and we feasted. 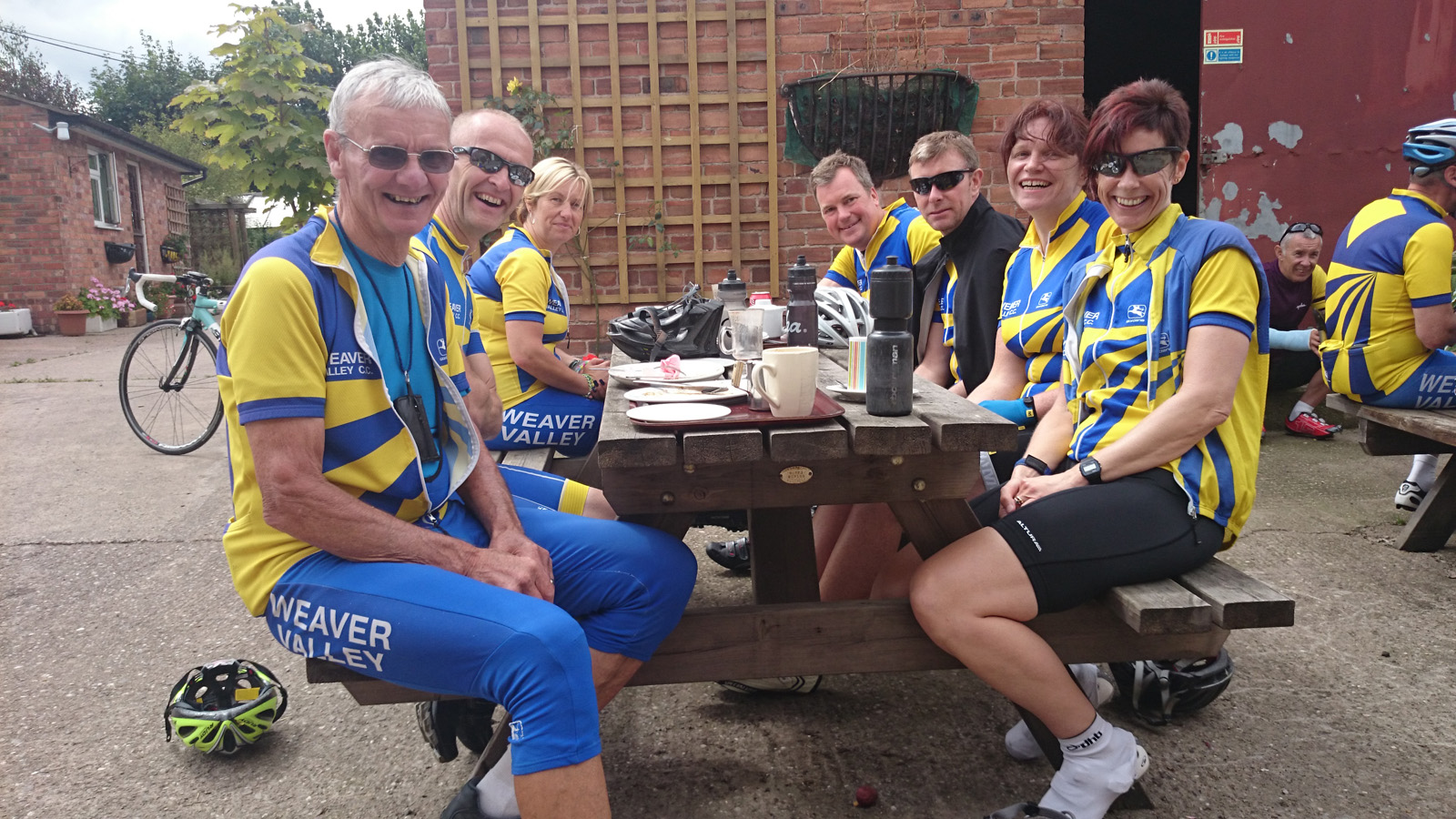 I had to add this picture, as it is possibly the first one where Carol isn’t covered with a mud face pack. She’d also kindly put out another fag, and had stopped coughing for the camera. Dave smiles, because he’s got cramp and is in pain. Mmmm, Time Trialling is fun…

We meandered out onto the road, and again backwards, whizzed off towards Huxley, where we turned towards Willington and Kelsall (as I had a daft idea of trotting up Yeld Lane via the wrong easier route). Carol had cleared her respiratory system, and shot up the hill in her usual mountain goat style in the big chain ring. She later vowed never to touch another cigarette. The downhill was good, and we turned off through the forest, where 50 yards into the road, Steve attacked. Quite what he attacked, I don’t know, but he did. We meandered along, and decided that we all might like an ice cream at Barnsbridge car park (Dave’s idea, and with Al’s more recent ice cream addiction, his eyes lit up). ‘The ice cream van is always there’ many said. Apart from today, when it wasn’t. Dejected and dissapointed we pedalled slowly to Hatchmere, where Steve was waiting, wondering, and realising that the sprint win is not a win unless witnessed. Curses.

A great run today, nice to put a different route out and back thanks to Al, but no thanks to me and Dave, who are very, very sorry for being such naughty boys and we won’t do it again, honest. My only regret from today though, is that I didn’t photograph Elaine’s magnificent ‘Scotland’ ankle socks. 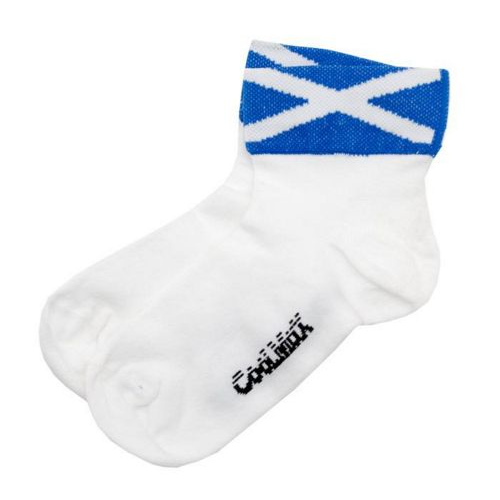 Not as good as Elaine’s, but very smart, very patriotic, very Commonwealth.

*Note – some or all of this blog is entirely fiction. I’ll leave you to decide what to believe or not…. I personally couldn’t believe the socks. 🙂