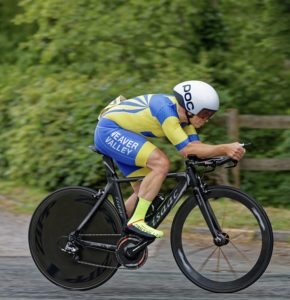 Quite a contrast in the weather from last week with heat and blue skies which attracted 20 starters on Wednesday.  Clearly it was a good night as we saw several PB’s.  Rapidly improving Andy Milligan took the honours with his 23:28 on the slower emergency course due to T-Lights at Lower Peover.  Paul Connor and Titch also beat 25MPH with 23:47 & 23:50 rounding off the podium.

Steve Thomas and Rhys Edwards knocked spots off their previous PB’s with Carol Robson taking 3rd.  Andy Milligan and Chris Latter tied for 4th on handicap also knocking a good half minute off previous bests.  6th improver on PB was Rob Amson who proves that riding the 10’s week in and week out does pay dividends.

The overall tables have also re-shuffled so make sure you all turn up to get your 5 rides in or to improve on the rides that you already have.  Don’t forget that next Wednesday’s club 10 in the club championship so don’t miss this one whatever you do!  It’ll soon be season end so make the most of it while you can.