I’m just on a wind down after a fantastic night on the bike, so thought I’d write a blog about how tonight’s team time trial went…

I remember in 2016 heading out with Elaine to watch a team of Jim Duffy, Jim Williams, Chris Gilbertson and Jo Blakeley ride the same 4 up in a 58:20; and feeling pretty jealous that Jo was going well enough to have a crack at it, wanting to do the same myself.

Roll around to a few years later and I’m definitely faster than I was then, so when Jim Duffy mentioned having a crack at it this year I immediately said yes! This was several months ago before Sam was a member, so we couldn’t have predicted then that the team would become Dave Walker, Sam Taylor, Andy Milligan and me.

I wasn’t feeling too bad about the 4 up having held Sam’s wheel in a club 10 the other week, however we headed out for a practice in the drizzle and grit on Monday night and with bad legs from the weekend I was having to go really hard to hold wheels. The original plan had been that as Sam and Dave churn out 390 watts in their sleep, they would be man 1 & 2 and swap over, whilst I held on in 3rd and Andy 4th. Come to practice though and Andy wanted to understandably take some turns and do his bit, finding it too easy at the back; so we changed up our strategy so that it was just me hitching a lift, but rolling through and immediately peeling off so that I could keep a wheel.

From this morning I immediately felt nervous about tonight. I knew I would have the most work to do to get round and it’s a new pressure when you have a team you don’t want to let down. Coming to the start though I was put at ease straight away when Andy sprinted off as man 1 and I just heard Sam yell “hang on Andy!” whilst bursting out laughing, it was obvious we were all in it together. We got going and stuck to our plan of taking a turn, flicking your elbow and coming backward whilst the three rolled through; we got a clear run at Chelford roundabout and then were immediately stuck behind a horse lorry for what felt like ages. After this we saw our first fan club outside the Egerton Arms, with Jim, Caroline, Dave and Kevan giving us a yell which gave us all a boost. I was second behind Dave as we peeled off Andy’s wheel turning into Seven Sisters, holding Dave’s wheel for most of the lane until it tips upward toward the end and that’s when I definitely struggle compared to the guys, luckily though Sam gave a yell for me, Dave eased off a bit and we were altogether.

It is worth pointing out at this point that the marvellous Kevan Underhill hadn’t settled at the pub but was driving round as many parts of the course as he could to yell at us as often as he could manage (I think this totalled six times). Kevan popping out at so many intervals and seemingly only ever shouting “GO EMILY!!” became quite entertaining for me and kept me going…so thank you Kev! 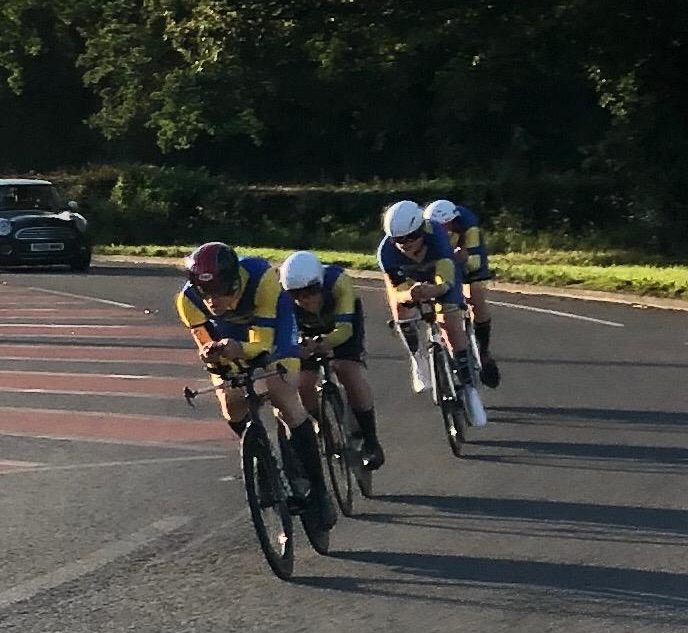 We pressed on to Whipping Stocks, where on the bend we saw our second fan club of Laura, Elaine, Jules, Alan, Carol & Dan (and anyone else I’ve forgotten sorry!). Another great boost! Round the bend and down and up the dip, with the guys keeping it sensible for me as unbeknownst to them I had a rotten case of calf cramp; though at least with a headwind and the amount of shelter I was getting I could shake it out after a bit. Past the finish bend for the first time, (which felt like a mental hurdle and like I was going to get round it all) we passed Spinney caravans where we got another boost from a yelling Anne, Graham and Ged! Finally we got into Twemlow with a tailwind, where we didn’t really open up until we’d cleared the dodgy second bend with the grid on.

After we’d come out of Twemlow, I heard Dave say to Sam to keep me as 3rd wheel, so I wasn’t going from 2nd into 1st at any time. It was such a good shout as after that my front wheel didn’t see daylight again and I got so much more shelter, meaning we could keep going faster, with Sam knowing exactly how hard to go up the hills to keep me on, and at one point coming past me as I was dropping from Dave again. I’m so thankful to the guys for the way they rode it, everyone kept an eye out for me, adapted to changing strategy in a heartbeat and keeping us as a smooth looking unit for the entire ride.

We had another clear run at Chelford, and past our pub fan club I could feel that we were getting closer. Just as we turned into Seven Sisters we were caught by Team Chronomaster A, who went on to win, and again I found the lane though, risking cramp whenever I pushed to hold onto Sam. After we’d taken the left onto the last few miles before the finish though I was feeling alright! And we stayed together really well back past our cheerleaders at Whipping Stocks and onto the finish, ending with a 54:48 which we’re all so so pleased with.

I just want to say a huge thanks to everyone for all the encouragement, both on Facebook / Strava and also on the course, you’ve all been unreal. We got so many cheers from so many people we lost count, and I feel really proud to be part of a club that gets so behind each other.

Massive massive thanks to Andy, Dave and Sam for looking after me so well in that and for us making such a good team. We all said after how much we loved it. 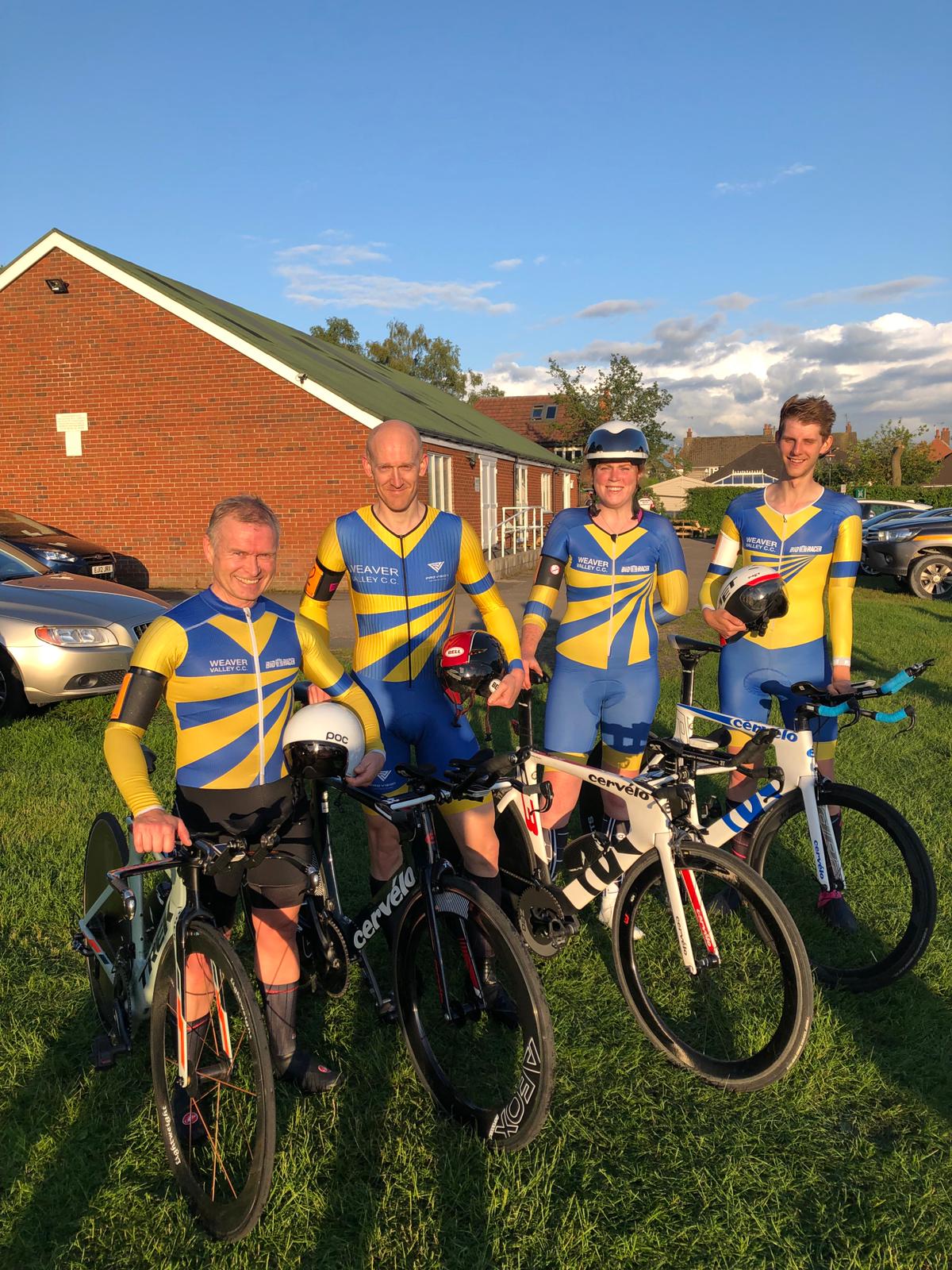