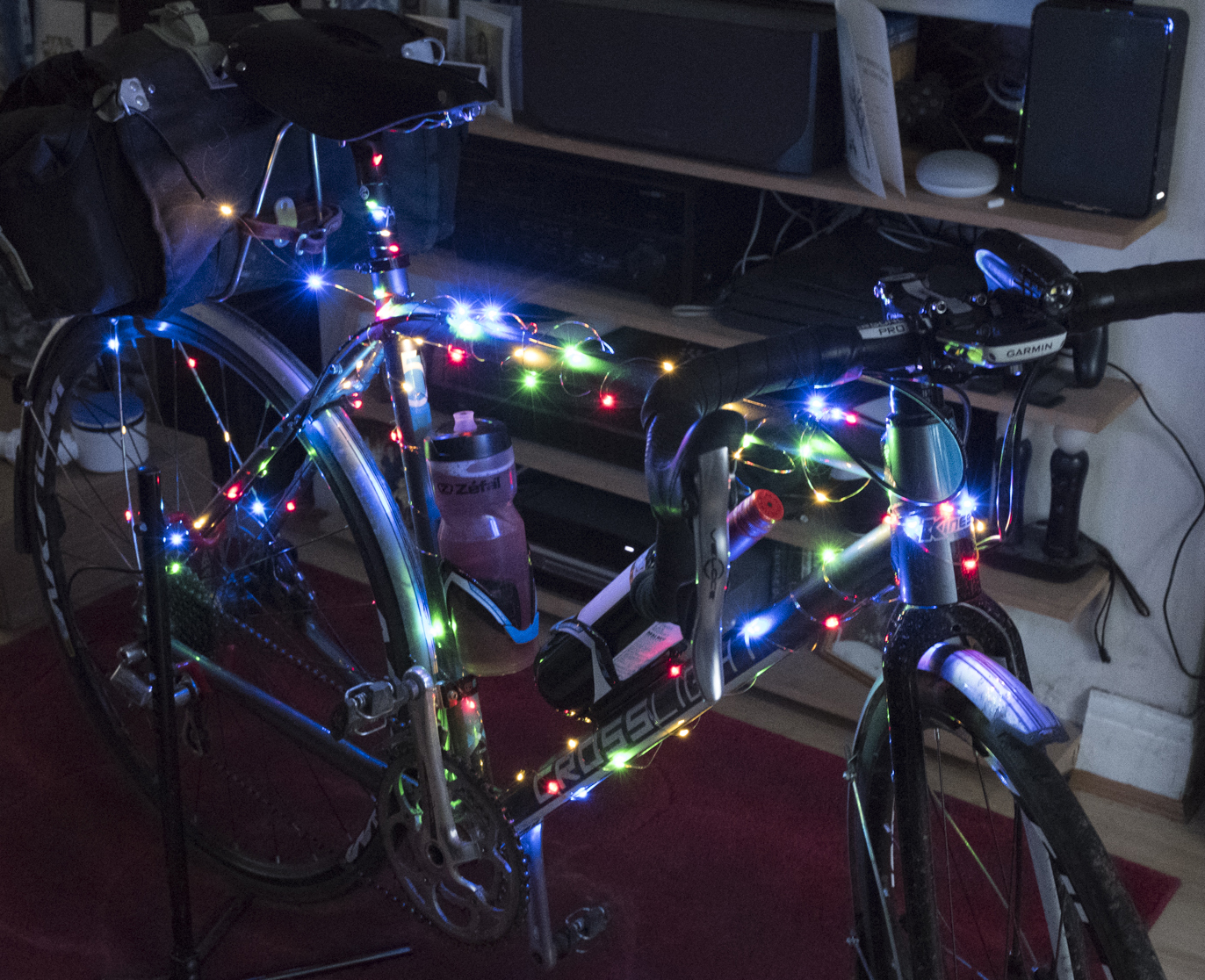 There was some doubt as to whether weather conditions would improve today, but early in the morning there had been a convenient thaw, with the promise of filthy roads and rain.

We’re on then. Up early, I festooned my bike with Christmas lights, and used bottle holder number 1 for a nice Malbec. 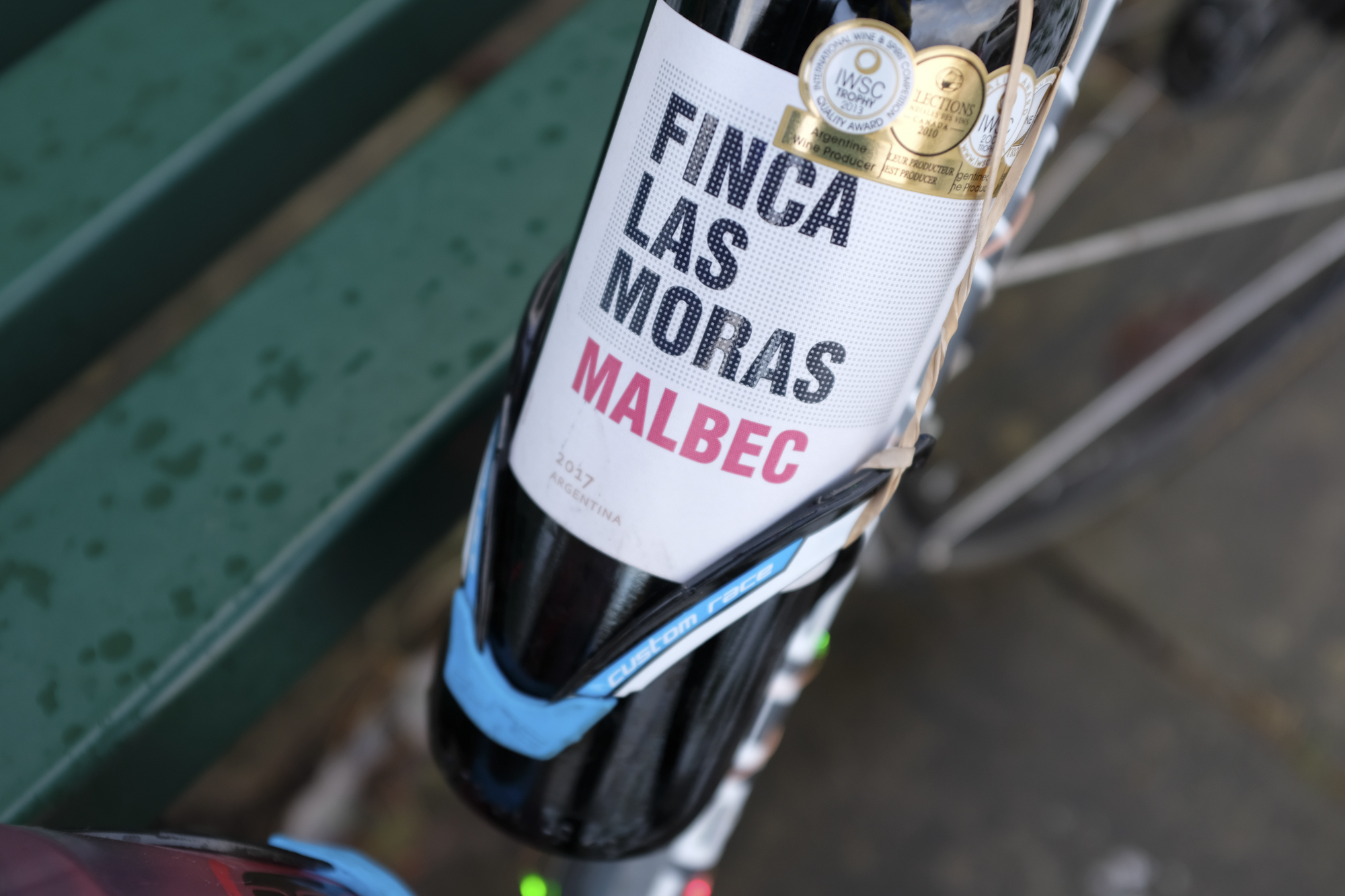 After leaving the house far too early, I turned up at about 09:40 at Delamere, and waited patiently for other riders to arrive or hypothermia, whichever came first.

Riders turned up in dribs and drabs and formed an orderly queue, noting fewer riders than were due to eat Christmas dinner today. Clearly put off by the weather of the last few days. 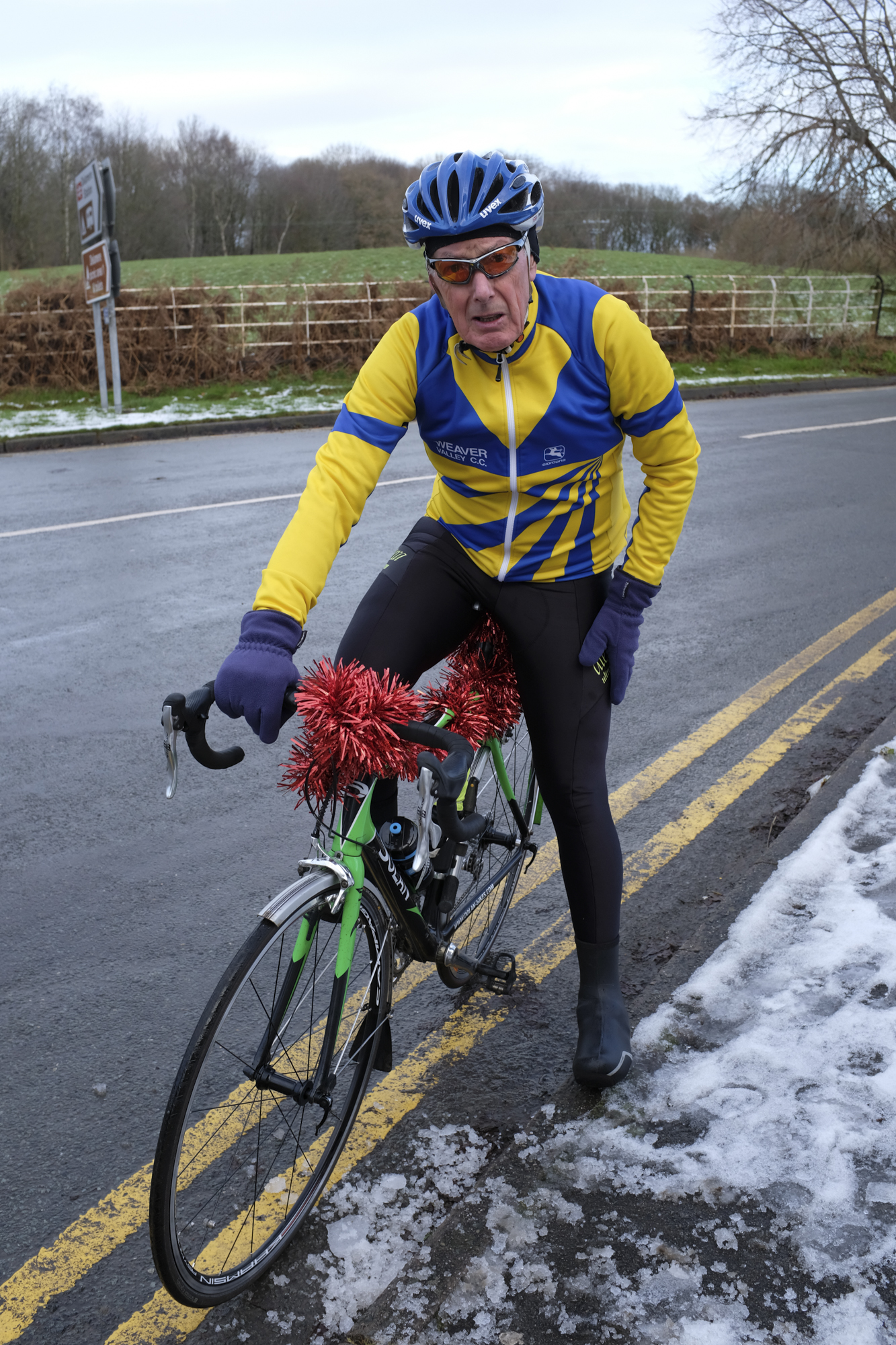 The boss, with borrowed tinsel (you’d have to ask him). 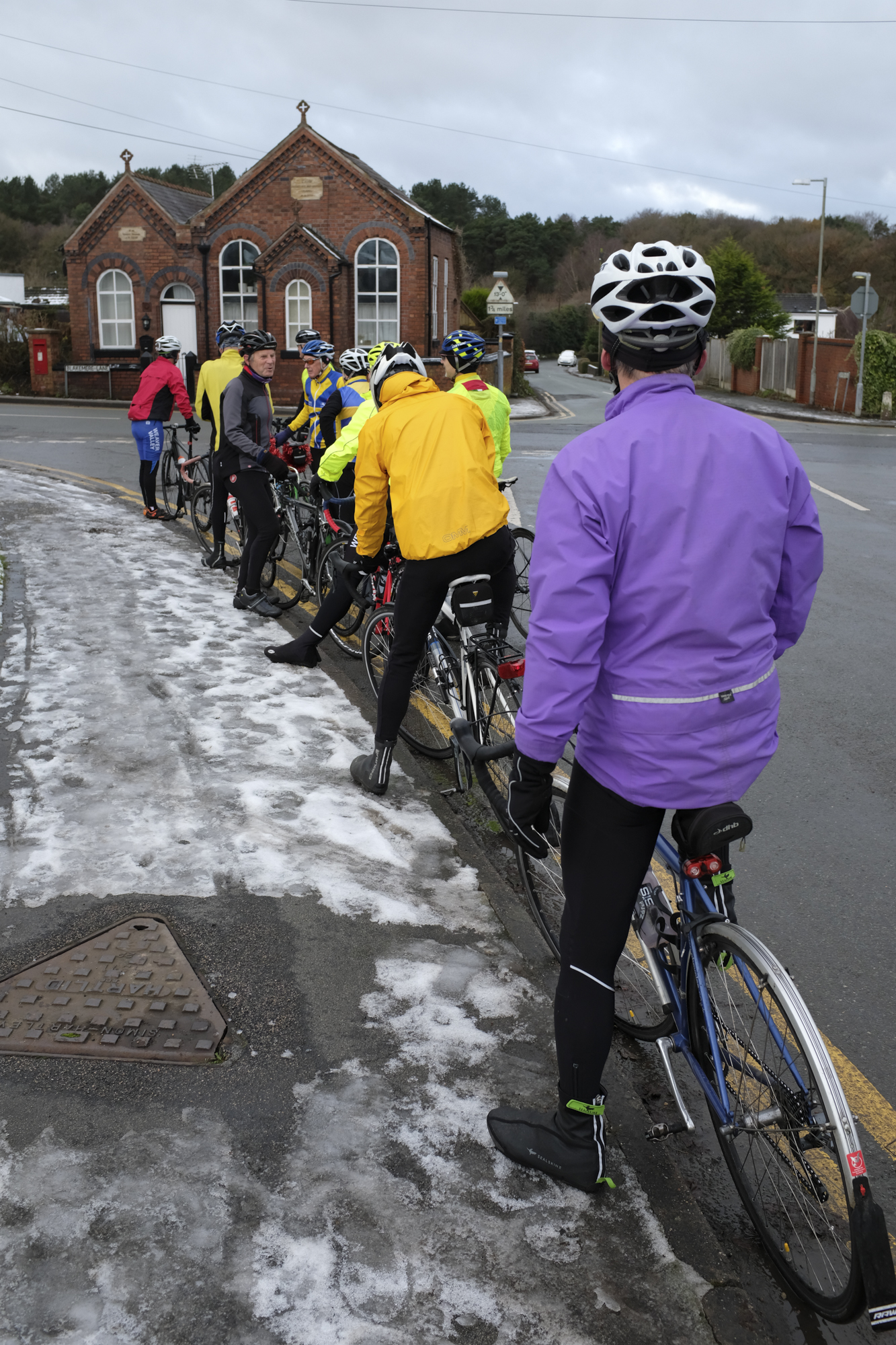 An orderly cue of hungry riders.

On our way at around 10:18, we shot through the forest until we met a lovely tractor, resplendent with a hedge trimming attachment, covering the road in a festive carpet of sharp trimmings. Needless (or needles?) to say, at the end of Delamere Road, the shout of ‘puncture’ went up, and we all had a rest. Some cycle decorations were noted to look a little dubious in respect of their placement, but we were assured that this was merely an incentive for the rider in front to keep up the pace. 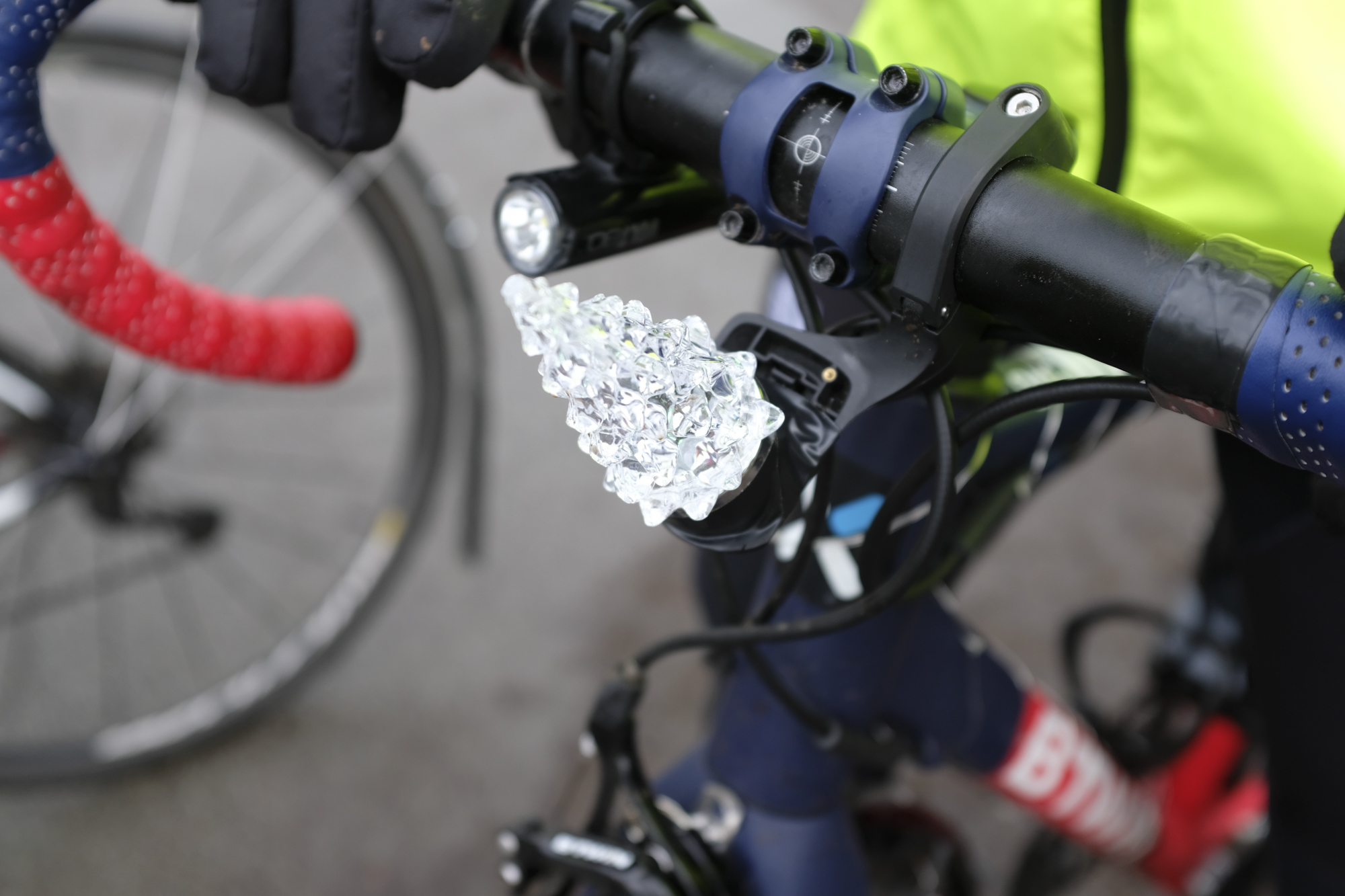 Lovely cold winter rain started to fall the other side of Tarvin, and after another brief ‘chat’ break, it was decided that it would be a direct route there.

Arriving, we filled one of three tables set out for us in our exclusive roped off area, but gradually, those with and without excuses started to arrive.

All excuses not to brave the elements today were dismissed, some were feasible, other were not (‘I don’t ride bikes with mudguards’? – You know who you are). The best excuse if the day though, came from Syd, who having the aforethought and premonition that today’s weather wouldn’t be to his liking, chose to have a replacement hip two weeks ago, just to get out of a ride. Very inventive. 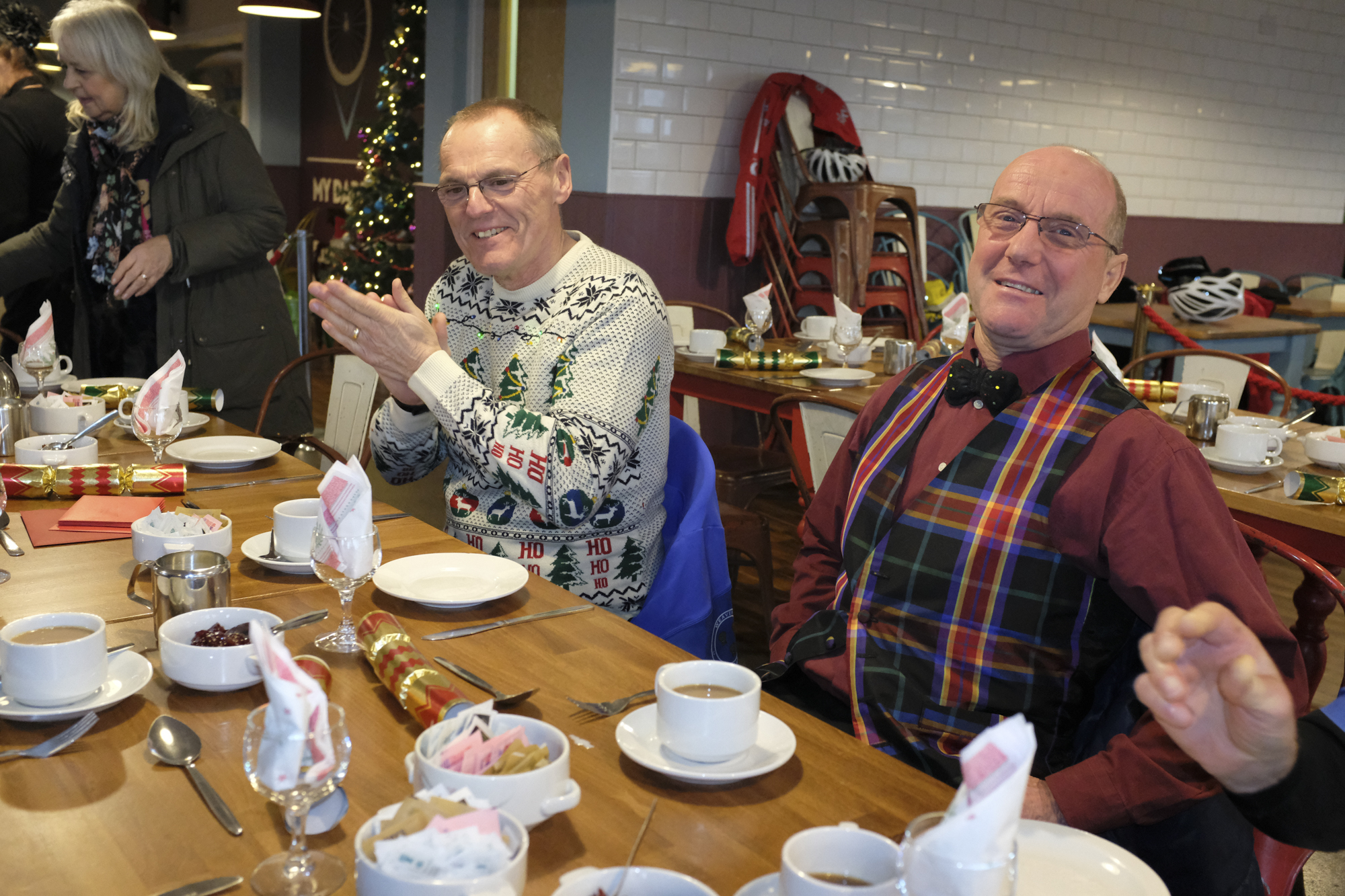 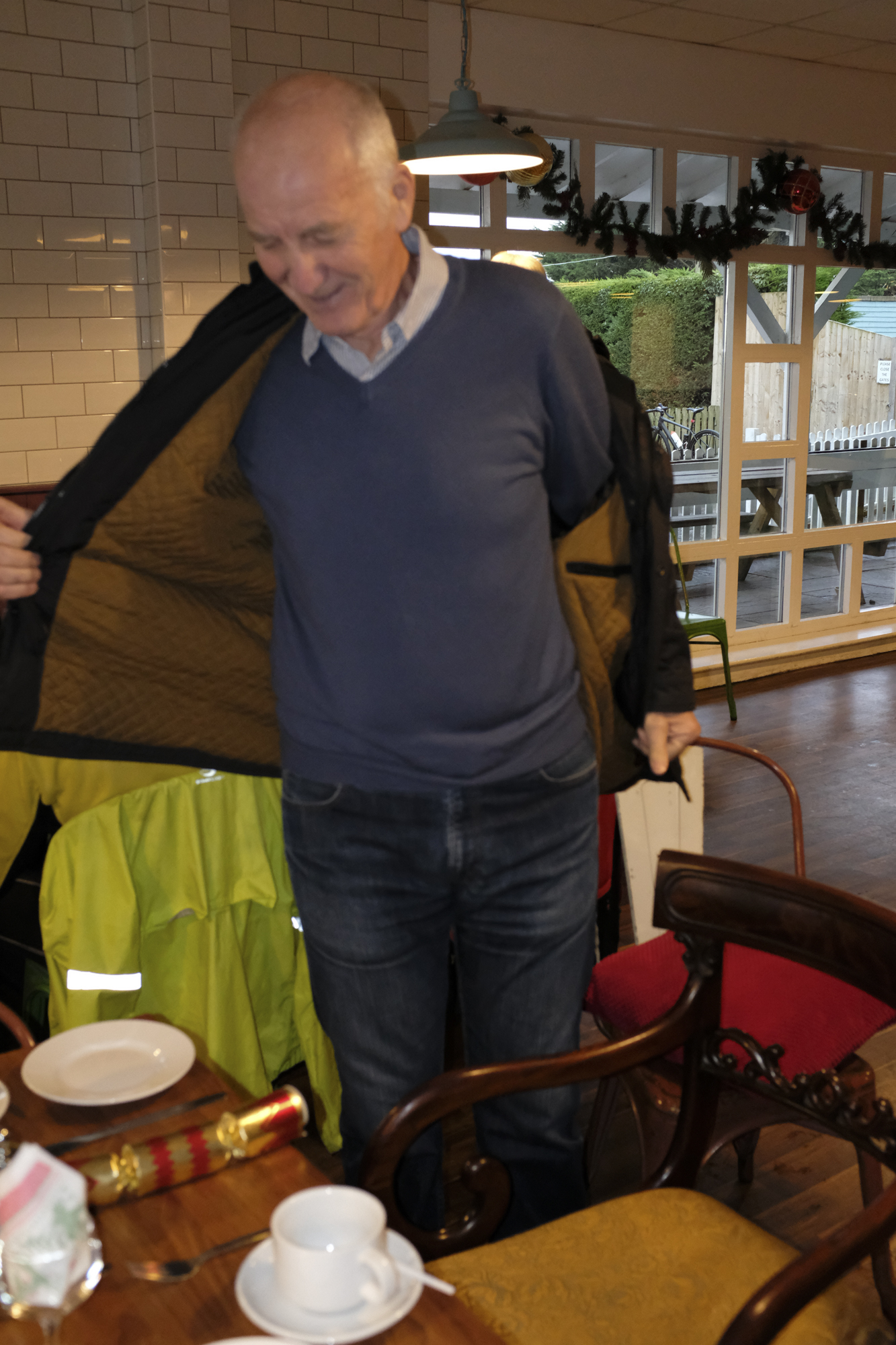 ..and a very good excuse, focusing not on the bionic man, but on his comfy ‘king’s’ chair. 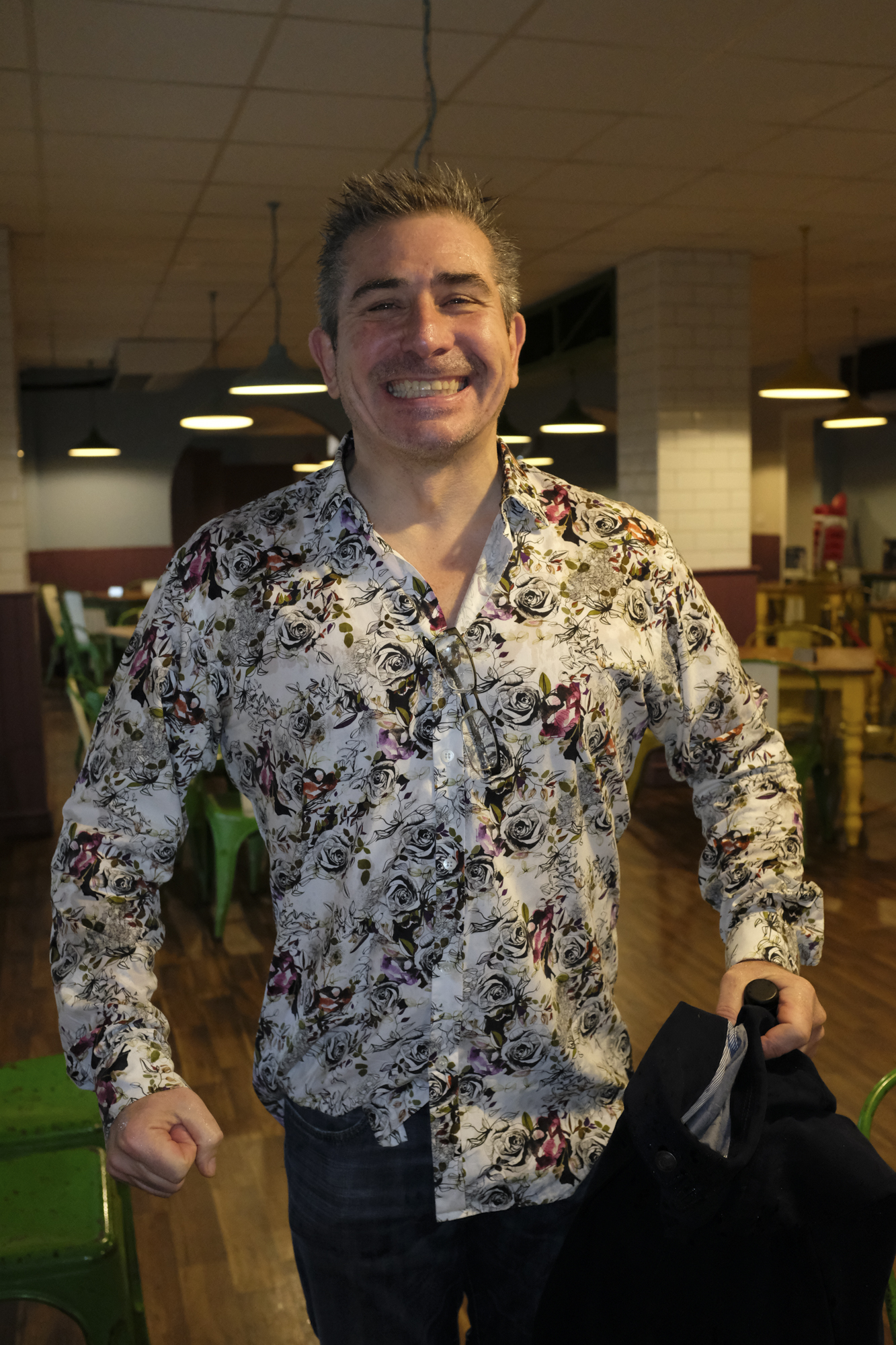 ..and Andy, who wore this shirt for a bet, allegedly. You win.

Dinner was speedily served, and we were well looked after by Mel and the team, as we always are, with plenty of food and wine to boot (so much for lugging that extra kilo out today). 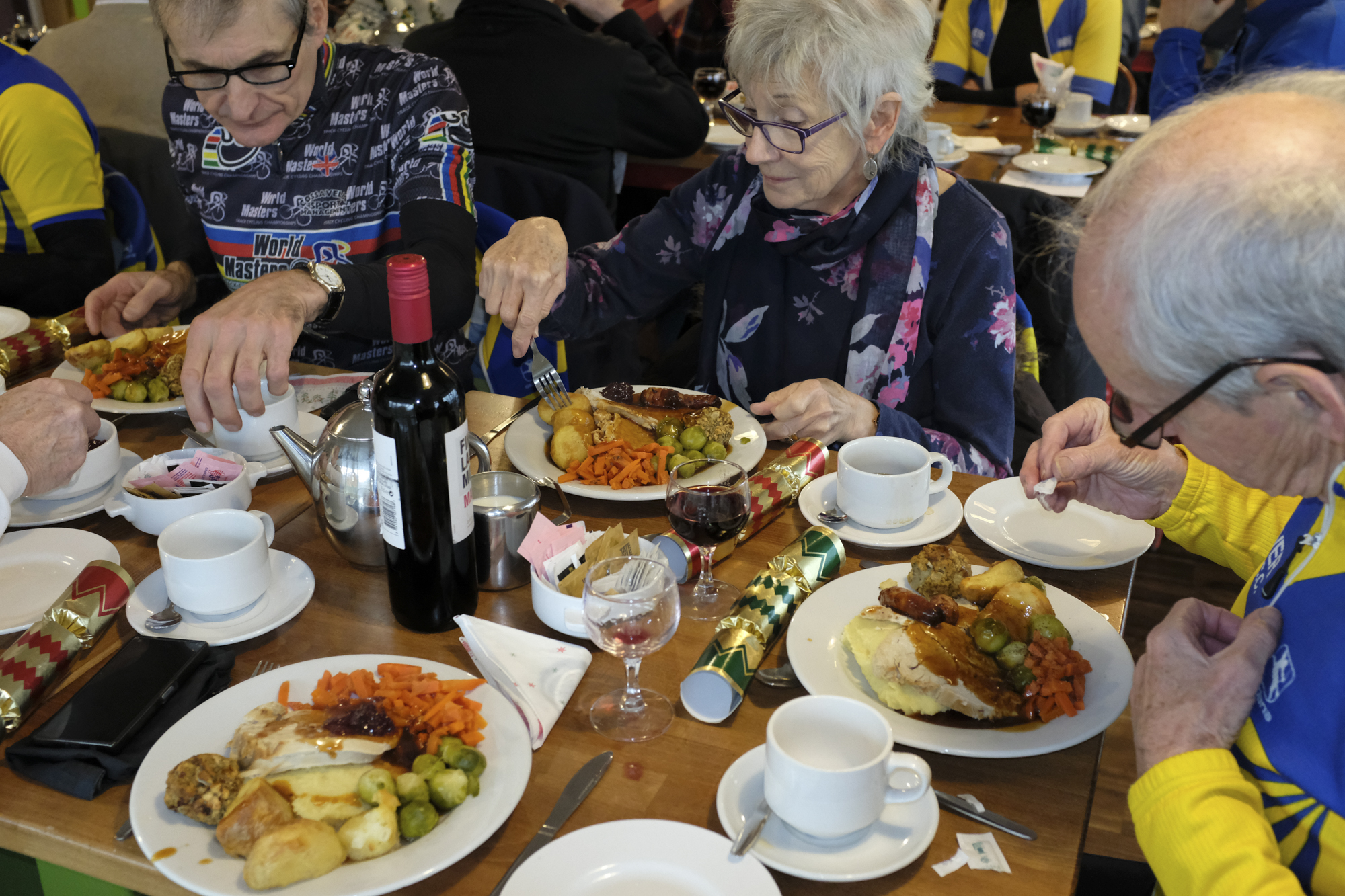 Not standing on ceremony, everyone piled in. 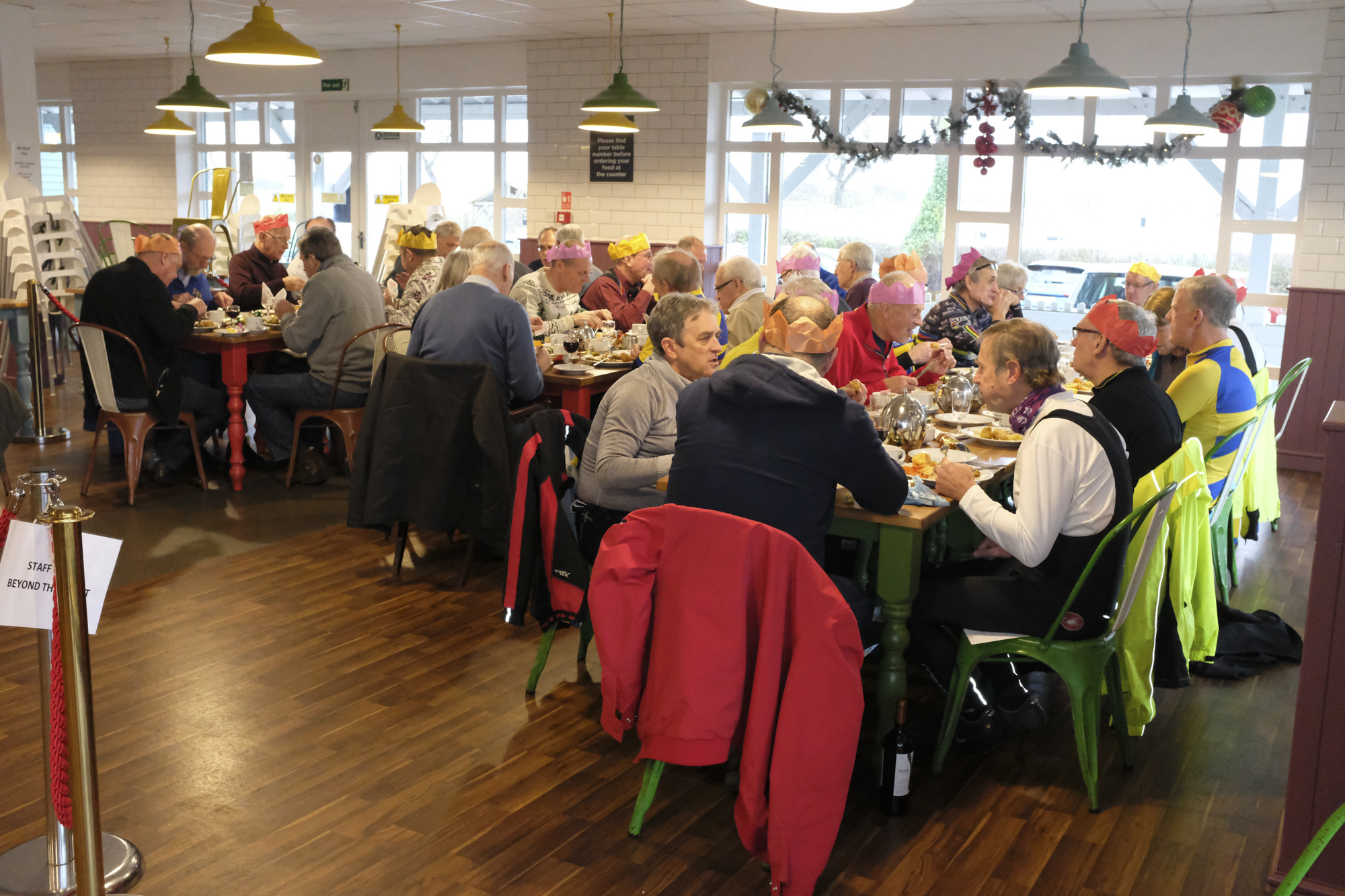 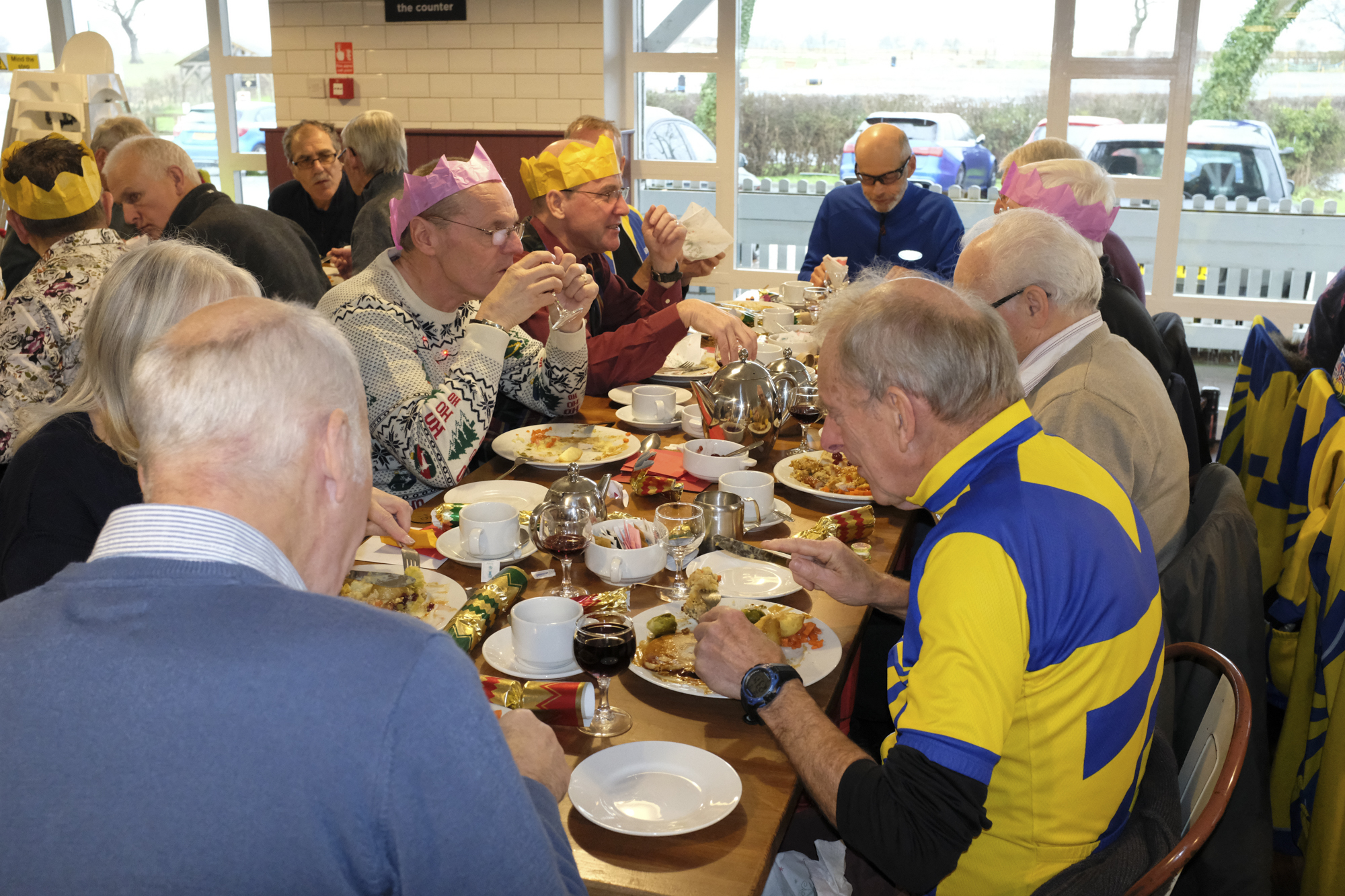 Al finished his first by the looks of it. 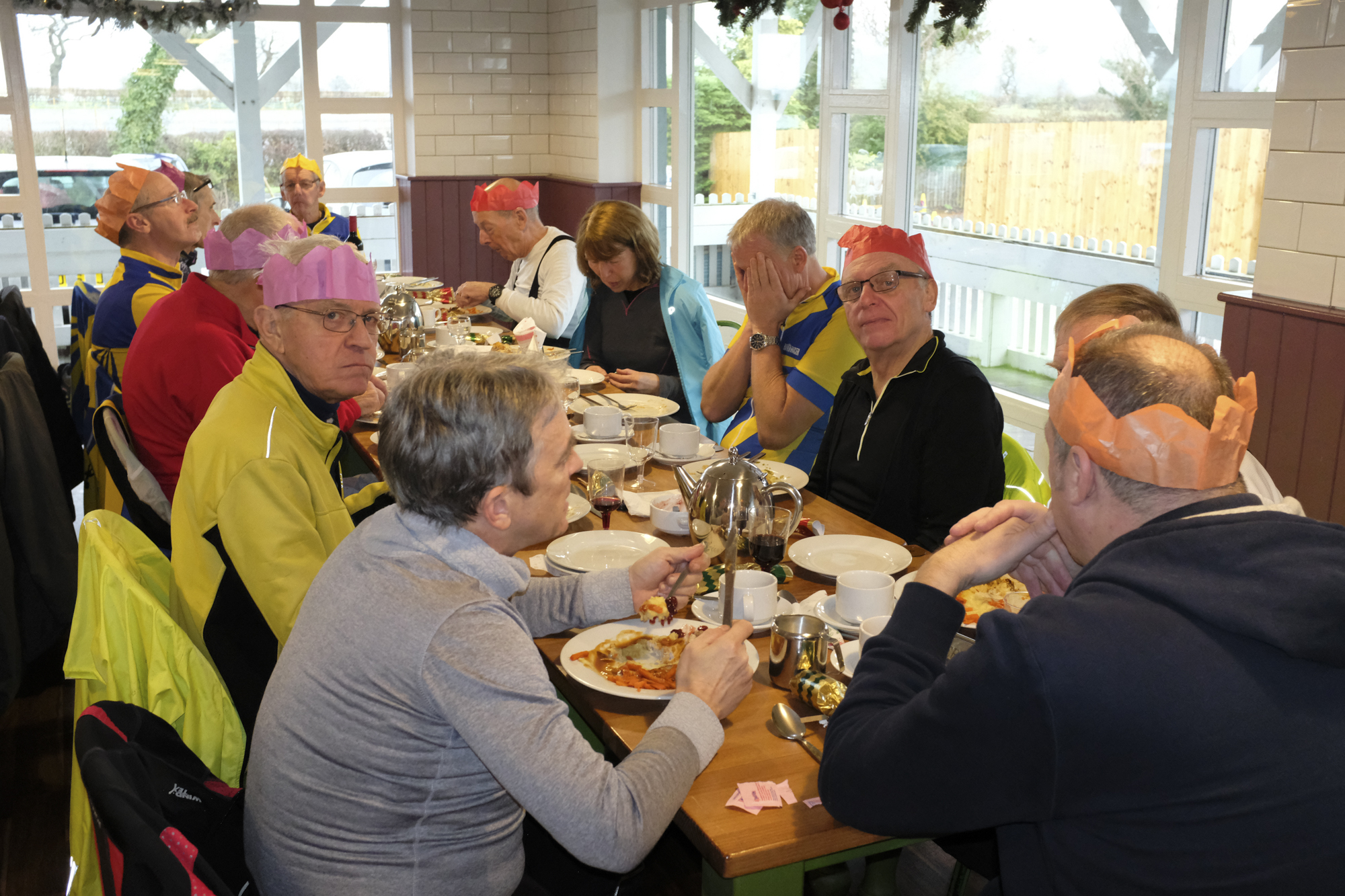 ..and Malcolm didn’t look as though he wanted his photograph taken. 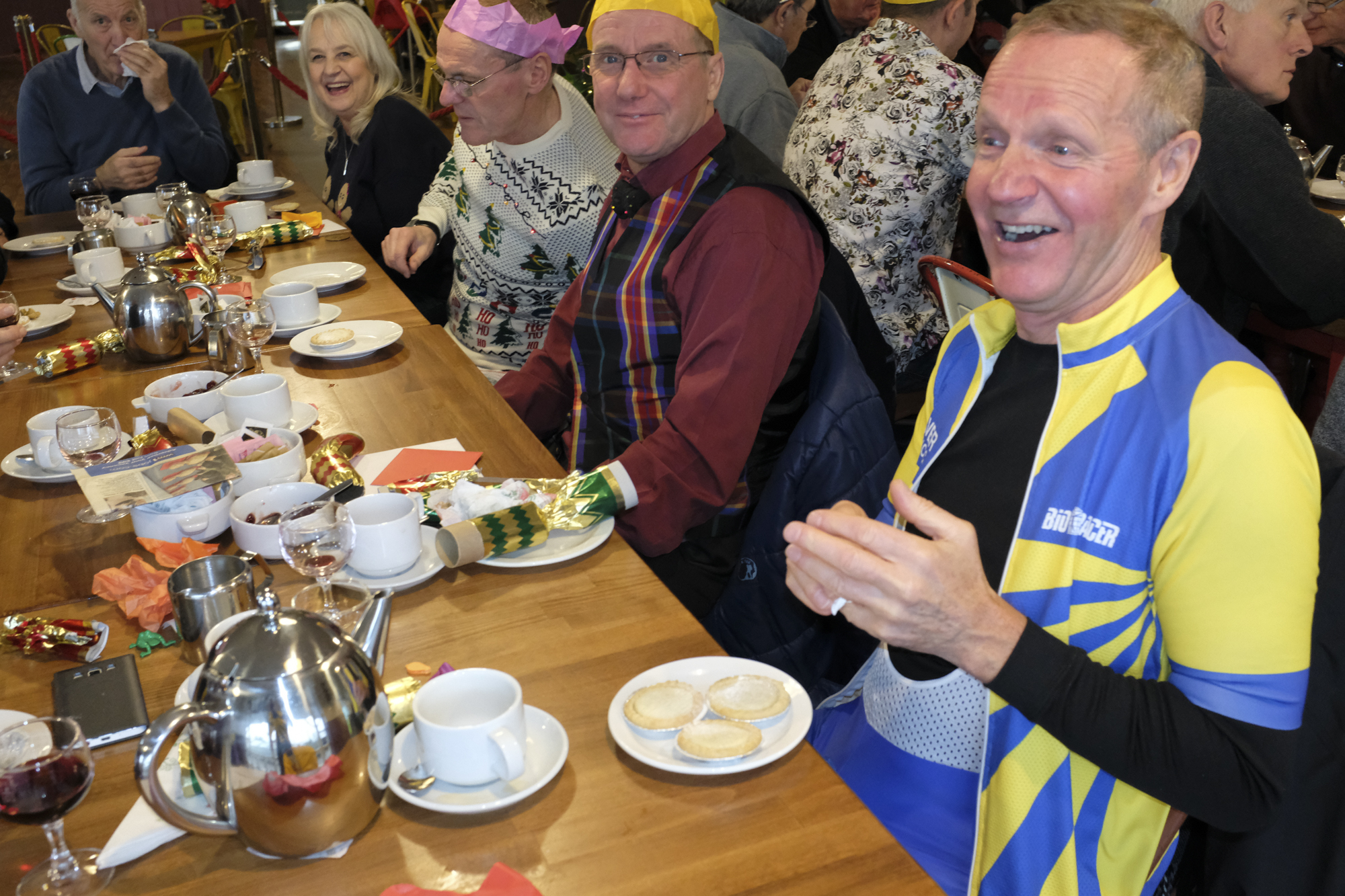 ‘Who’s nicked me other mince pies?’ Thinks Al. I think we can see the culprit, challenging the title…

A fantastic dinner, topped of by quite a good ride home, with not much in the way of rain at all, and a few rays of sunshine thrown in.