The flip-side to enjoying riding on bracing winter roads is they tend to not be as clean as summer ones. Come October time and the clocks changing there is always a ‘mudguards’ call and people, over the next couple of weeks, polish up their summer bike and put it to bed for the winter and then drag their winter bikes out creaking and screaming. Winter bikes invariably have mudguards and standard mudguards are fantastic. Fantastic if you go out by yourself and don’t ride in company that is; they will keep you clean. Any standard mudguard is no good though if you want to have friends to ride with. They don’t do the job, pathetic, terrible. Down a wet, muddy, slurry covered lane following someone with standard mudguards you quickly end up covered in c**p and worse still, eating a load of it. Now I am sure there are various clubs and groups you can join if you have a penchant for the consumption of merde but the WVCC, unless something was voted in at the last committee meeting, is not one of them. No dear reader, if you are a club cyclist you don’t need mudguards you need ‘Clubguards‘! (I am protecting the intellectual property of this idea). Now the good thing about Clubguards (TM) is, in the same way a club cyclist is a step on from a regular person on a bike, so Clubguards are an adaptation of your own existing guards. ‘How’? I hear you say. Well, simple, in one word, flaps. Attach a flap to the bottom of your mudguards to extend as far down to the ground as you think you can get away with. There are several ways to get hold of flappage, first, go to eBay and put in ‘RAW flaps’ and the kind people there will sell you some. Second, if you are handy and have scissors and an old fairy-up liquid bottle, cut your own flaps. Once you have your flap, drill though your mudguard at the appropriate place and fix the blessed flap in place with a screw and nut. Simple.

Please note this will not work if you have those ridiculous mudguards that hang around somewhere in the air high above the rear wheel and are inevitably called something with ‘race’ in the name. The solution to that problem is to first go and get some proper mudguards then follow the flappage advice. Please do get flapped up and put a smile on the face of your clubmates and not cholera inside them.

The after effect of my last club-run was a bothersome inability to walk for several days and so, much as the Llandegla disco appealed, I decided that my first ride for 2 weeks should be steady and sensible and so I tipped up at the rugby club at 10.00 am. We were a large group initially but quickly and naturally resolved in to 2 muddling and mixing groups at slightly different speeds and after the elastic stretching several times we agreed at the forest that the moderately faster group should go a little bit quicker than the ever so slightly slower group a little bit slower.

Our bunch of about 9 trundled through the forest and we approximately consisted of Stuart (back from a shoulder lay-off), Tony (on the hunt for rabbits), several Kens, Carl (early on super strong up any rise, need to pace the effort), Graham (not a lot wrong with the heart it seems), Carol (chatter, chatter chatter), new lady Laura (acquitting herself very well on her first clubrun) and me.

The potholes of the forest covered, we went a direct route to the Mills. Down the lanes we went without incident but very soon covered in masses of muck on our faces and clothes provided by the aforementioned mudguards. At Mickle Trafford, as we turned right Carol peeled off in order that she could go home and be hosed down. Our motley crew carried on at a steady pace past Cheshire Oaks only stopping for a couple of minutes for one brief mechanical incident. 2 Mills was, as always, a welcome sight and a small sprint was won by someone that was not me. Apologies for not remembering, I was too busy leading you all out. 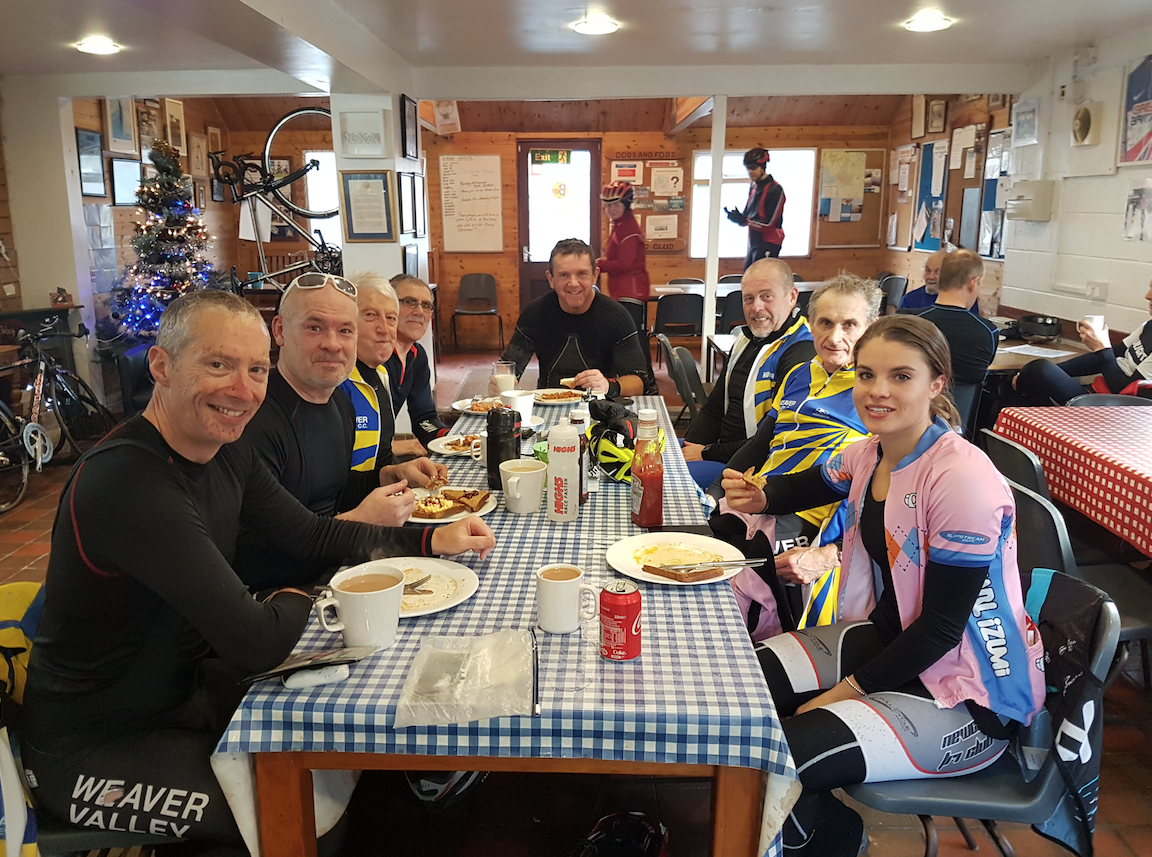 We were in to our food by the time the ever so slightly slower group arrived, I really should have made a note of names but I do know Terry and Dave were both there, Jim W had turned home early suffering an attack of the vapours.

Vittles chowed down we were quickly dressed and away again, our route taking us to Queensferry and down the river towards Chester with a comfortable tailwind. Tony suggested we go home via Holt to add 10 miles or so on to the day, there was a general consensus so we went right over the blue bridge and towards Kinnerton. For some reason past Kinnerton and towards Holt a couple of members of our hitherto restrained group got a little giddy and many calls of half a rev were shouted to tame the mood. As it was we stayed together but not in a tight unit, until Holt.

It is not acceptable to ride on and leave anyone stranded at the side of the road miles from home. We are a club, we look after each other, we are supposed to be friends, friends take care of each other, otherwise we are just a bunch of random people going about in our own bubbles.

If any riders are ever distanced from the group and gone off the back of a ride and you do not know why, it is never right to make any assumptions as to their fate. There could have been a mechanical, an accident or any other incident and unless you know for certain what the issue is then as soon as the group is aware of any detached riders the group should stop and wait. If the detached riders do not show up then someone goes back and looks for them; if the group has stayed reasonably together you will never have far to go back and search. It is not acceptable to ride on and leave anyone like this, it does not matter how experienced they are or how old they are, it is not on.

Everyone, but everyone has an issue at some point out on the road, whether it’s a mechanical, an accident, ill health or a lack of form, it happens to everyone at some point and we always wait, it’s what friends do, what Clubmates do. Without this simple kindness what are we but substandard mudguards that spry s**t all over each other without regard?