Welcome, to the real world…

Okay, so we can’t go out and play, but we do need exercise, and playing our part in not spreading COVID-19 any further than our own sheds seemed to be the thing to do.

We are advised that we can exercise outside, but for most of us, a quick jog around the park doesn’t really cut it!

Zwift seemed to be the best option.

Although not a massive turnout, a few souls trudged to wherever our respective pain caves were, sat on our smart turbos, and connected to the Matrix.

I just decided on a short loop that we could do a couple of times. Having ridden the scenic Sand and Sequoias route before on Zwift, I thought it would be a reasonable challenge for some, and just a good way to stretch the legs for others.

You can read more about this course here: Sand and Sequoias

What I should have done was to select a ‘Keep together’ ride, rather than just let each rider tear off as soon as the run started. Unusually for a Sunday morning, there were over 20,000 other Zwifters across the world, all online, all hiding out at home looking for a good way to get the level of exercise that they need. 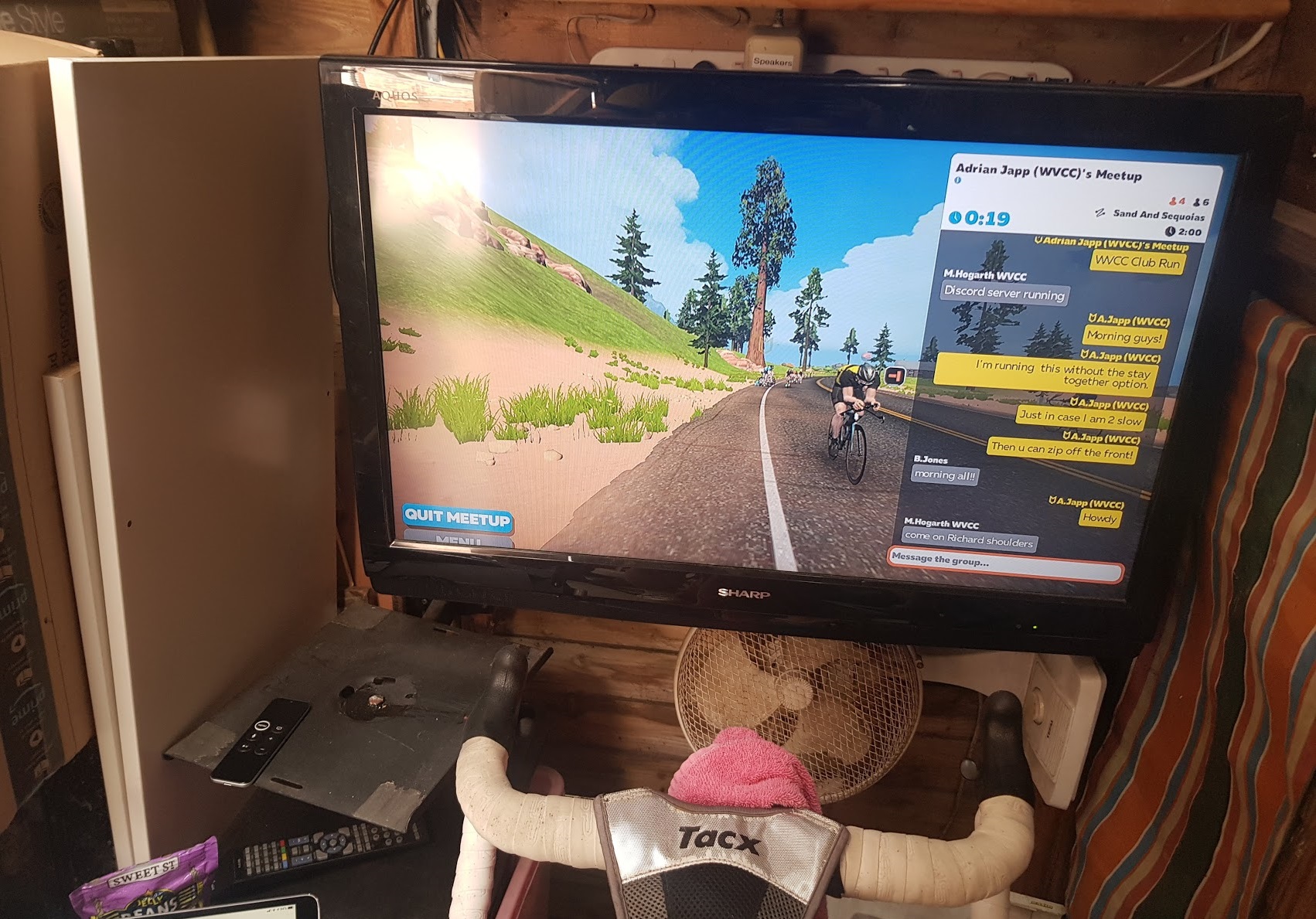 Off everyone went, in the absolute mass of riders on the course. We were quickly swallowed up by the bunch, and lost sight of each other!

Note to self – keep together ride to be selected for next time!

So, we battered through the crowds of riders, and by the time we entered the Sequioa section, I’d cleverly, like a good leader, started to lead from the back, and got some space around me (read, being dropped). 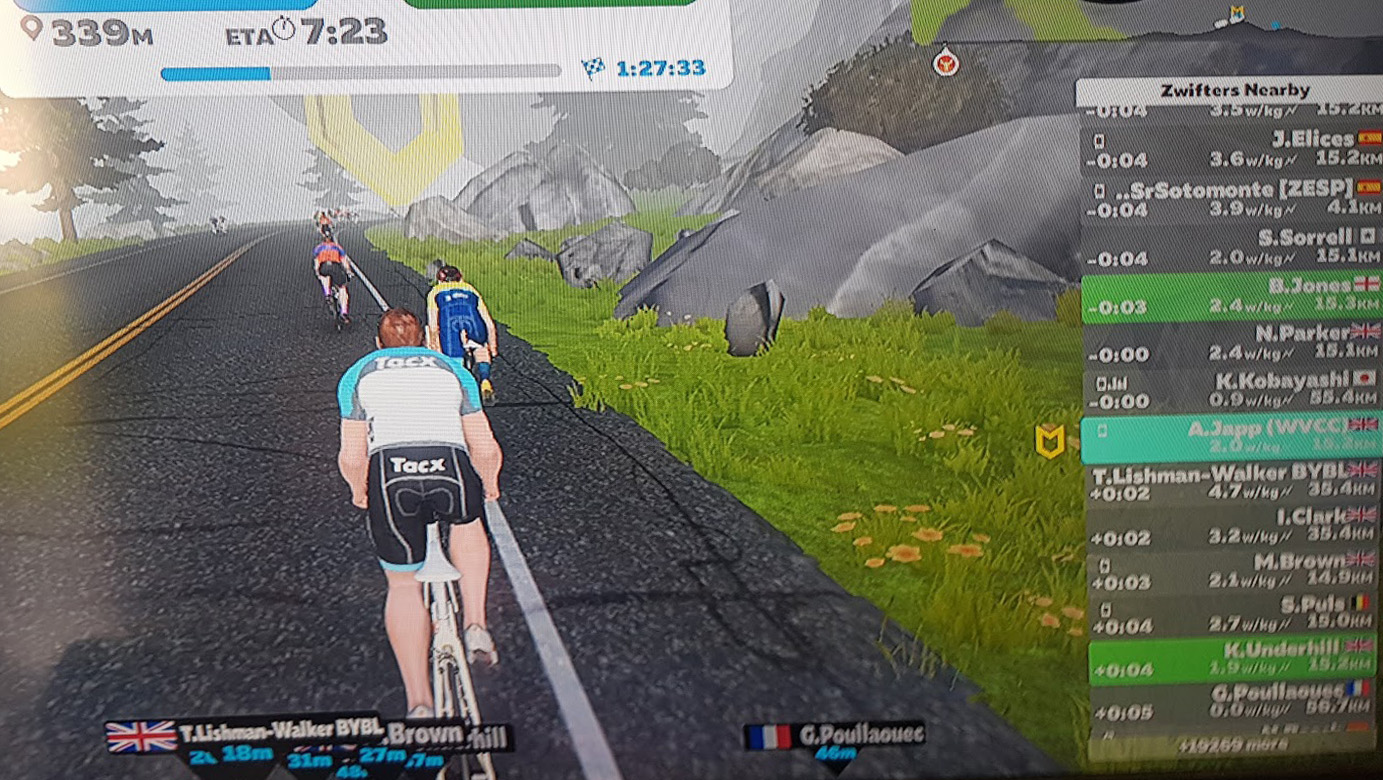 I was then joined by Kev (or El, or El, or Kev – they were taking turns – virtual tag team racing – a new sport?) and Benn, who kindly waited for me , just like he wouldn’t have in the real world.

Thereafter, and for the rest of the ride, I had a virtual half-wheeler in the form of Kev (to be fair, he did overtake me on many occasions, but was finding his cyber-feet so to speak, and diligently followed the leader!) 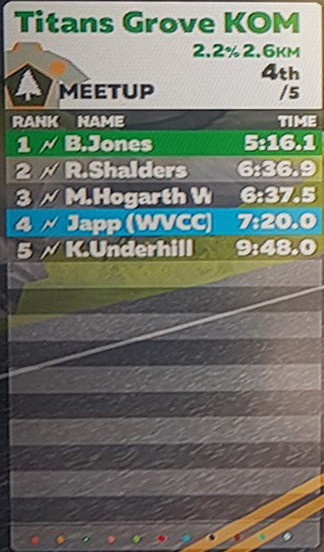 Some impressive times were put in on some segments. Richard Shalders seemed to be ‘on it’ from the start, and didn’t let up for the session, nipping past Martin Hogarth’s time on the Titans Grove KOM with only Benn Jones putting in a monster push to put over a minute in Richard.

So, as we’re all indoors for a bit longer yet, I’ve already added another meetup for next week (see the calendar), where we will be doing a group ride, on  a longer course – which we probably won’t complete in the time, and we’ll use the Discord app to linkup and chat properly, without reaching for the Zwift companion app to text message within the app!

See you next week! 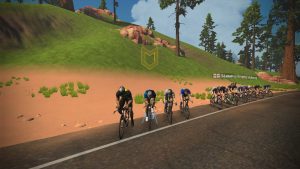