Weekend away 12&13 Nov Altura Trail and some other tracks 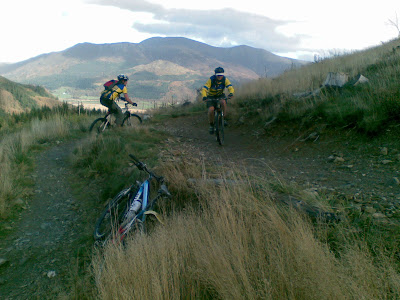 Glorious sunshine and unseasonal warmth helped make it a very memorable Lakes weekend. Eleanor (Kev cyclo crossing), Andy B, Derek, Matthew, Richard and I met at the Whinlatter forest visitors centre where we embarked on the Altura North loop. Within metres we had headed off on the wrong trail, Matthew broke his chain and Andy simultaneously his front mech. This was just the start of a very eventful day, with Andy breaking his seatpost (second time that I can remember), Andy falling and scraping his leg, Richard doing a graceful cartwheel over the handlebars and while Andy mended a puncture Eleanor managed a forward somersault resulting in a heavy nosebleed and a few other scrapes to knees and arms besides.
Fortunately none of this stopped us from continuing on to the South loop – which is where these pictures were taken climbing the switchback single track with Skiddaw in the background – which took us up to the high point before some tricky rock sections then brilliant flowing berms and jumps. 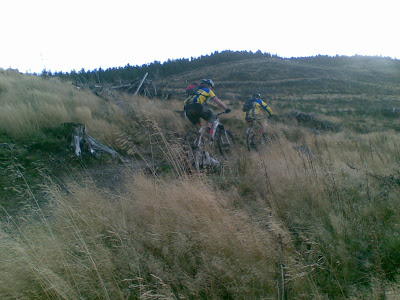 After lunch we rode the North loop again, while Richard went his own way exploring “off-piste”. Dinner at the Ivy House and beers at the Royal Oak in Braithwaite rounded off an interesting day.
I did the duathlon on Sunday which was tough but enjoyable (report at http://www.highterrainevents.co.uk/3.html) while Richard led the rest around the back of Skiddaw to Skiddaw House and down to Keswick on the superb bridleway which traverses the east side of Lonscale Fell.
Off Road
Club Cyclo Cross Sun 6 Nov
Elaine cops it – and where was Julian by the way?!