Tour of the Abberley`s 2012 race report.

A report by Alan Kemp

This years race held on 5/6/7th May in the lovely Worcestershire countryside consisted of an uphill prologue  TT and 3 road stages on quite hilly courses and  provides a rare opportunity for us vets to experience the delights or otherwise of riding a 3 day event.

The event attracted  a top field, riders travelling from as far apart as Scotland and Kent.

Race organiser Mike Amery changed the HQ this year to Great Witley Villagehall and together with most races finishing closer to the HQ than previous years, really saved a lot of suffering to the riders as they normally have to trudge uphill back to Abberley HQ with cramping muscles.

This year the Ds and Es and Fs rode in the same race.

Very cold morning.  Plenty of riders using turbo trainers and rollers to warm up  for this very short painful test as well as practice runs up the hill which was basically a short climb followed by an easing in gradient for a short section before the gradient increased on the push to the finish line over the top of Woodbury Hill.

Setting off at 30 second intervals, with a big risk of  O2 debt after the first section of climb, there were several starting strategies observed.  Some pulled away steadily, pacing their efforts carefully, others did not.

Andy Donaldson appeared to start as though in the final 200 yards but did a great ride to win and get his campaign off to a flying start.  Jolley was 2nd at 4 seconds and Kemp 3rd at 6 seconds with all the overall contenders no more than a few seconds apart.

Three laps of a circuit towards Holts Heath on A443 and eventually retuning to Great Witley along A451.  Finish on a short link road between the two A roads.

Very fast start with plenty of attacking from several riders, with the whole bunch responding to attack after attack with Donaldson, Jimmy Rutherford, John Marshall and Malcolm Whitehead all in the thick of the action. Still in the early miles Phil Rose on about his 5th attempt went clear as the bunch took a breather for a few seconds.

Martin Russell took a flyer and joined Rose and suddenly this looked dangerous.

These pair pulled away to a maximum of about 1.5 minutes on this very bumpy, hard circuit, as the key riders in the bunch attacked each other and failed to organise an effective chase .

Russell won the stage having shed Rose near the finish, gaining around 30 seconds on Rose at the line, and another minute clear of the bunch.

F cat rider Richard Booth was first into the last corner and led out the bunch sprint with Kemp on his wheel.  The yellow flag was further from the corner than Richard had realised, Kemp went passed with 200 to go as the downhill now turned slightly uphill and an over geared Kemp was pipped at the line by Donaldson for 3rd place with Jolley almost getting passed him as well.

Martin Russell in Yellow with Rose at about 30 seconds, rest about 1 .5 mins back.

Circuit based on Woodbury Hill on B4197,  a left through narrow lanes on a very hilly stretch of road eventually returning to Great Witley via A443, and the finish at the top of Woodbury Hill

This was the defining stage.  Martin Russell  knew he would have to defend his yellow jersey  right from the start, but the number of attacks he had to chase without any team support  was painful to observe as Donaldson, Whitehead, Rutherford, French all tried to go clear.  Martin knew he could not chase everything and so when John French and Donaldson’s team mate Malcolm Whitehead went clear, there was no response from him or the bunch and no need for Donaldson to respond either.

The following lap (2) a quiet until now  Rob Whitfield, launched off the front with Donaldson responding immediately.  They meant business and quickly disappeared on the very twisty, hilly lanes and very quickly joined forces with his team mate Whitehead and John French to form  a formidable group of 4.  It looked all over for the rest but Jimmy Rutherford, star veteran track rider, ever aggressive, attacked alone and with legs in the bunch feeling heavy from this energy sapping circuit, he also rapidly pulled away and out of site.

Tom Wilson, riding very strongly on all the climbs pulled away on the road to Great Witley with Kemp with him  at about 14 miles to go.  Tom for the first time, had a  bad patch on Woodbury Hill and urged Kemp to go it alone with the bunch now only  yards behind.  Into the narrow hilly lanes, Kemp  re opened the gap, saw Jim Rutherford as a spec in the distance on the main A443 back to the finish and this acted as a point of focus as he chased Rutherford.

With the 4 leaders,  Rob Whitfield attacked near the finish only to pay for his efforts and be caught and dropped up the final climb of Woodbury Hill.

Donaldson took the win and leaders jersey with French and Whitehead close behind.

Kemp tried but could not overhaul Rutherford who gave it everything up the climb, for Kemp to finish 9 seconds down at the line (behind Rutherford) and about 1 minute 20 seconds on Donaldson but about 2 minutes up on a very depleted and tired bunch.

Martin Russell leader at the start of the day, bravely gave it his all, but paid for his efforts, got the hunger knock and finished alone after the bunch.

Two laps of a circuit from Abberley, Clows Top,NewnhamBridge,Stocktonon Teme to finish at Clows Top.

Given the dire weather forecast of heavy rain due whilst out on the circuit and low temperatures, the biggest problem for some apart from the hills, was what and how much to wear.  Some settled for 3 under vests, newspaper and polythene up the front of the jersey plus gilet or rain top plus leg warmers.  Others wore shorts, top and little else but we all react a little different to poor weather conditions .

Tom Wilson went from the gun, and John Marshall in the bunch discarded his gilet after only a mile or so, onto a grass verge, for it never to be seen again as we raced towards Clows Top.  Tom was caught at the top as the leaders marked each other on the very long, fast descent towardsNewnhamBridge.

Rose, Marshall and Kev Shand moved off the front in a bid to get up the major climb atStocktonbefore the inevitable split occurred, and they managed it.

The climb at Stocktonsaw Malcolm Whitehead lead a long line of panting riders all the way up the climb, whilst sat  in the saddle to find only about 10 riders left with him at the top.   All the main contenders were there though and with the only notable absentee being Rob Whitfield who was having breathing problems  (as were most riders), the group seemed to mark time until the next and final climb of this long, nasty climb although the 3 man break were caught just before the end of the first lap.

Steve Jolley  attacked at the bottom of the last ascent of Stockton climb opening a small gap and provoking a painful reaction as the group led by Donaldson responded and clawed him back on the false top only for Rutherford to put in a burst of power to try and split the group which had the effect of dropping Rose and Russel, although they gamely fought their way back on after a mile or two.

Attacks were bound to come, and the winning move came from Rutherford who put in a great surge up Abberley Hill with Donaldson on him like a flash.  Kemp latched on as they did the sharp left, downhill through Abberley with a tailwind.

With 3 miles or so mostly uphill to Clows top, Rutherford and Kemp buried themselves with Donaldson not working in order to protect his team mate Whitehead`s overall position and Whitehead not helping French in the chase group and so denying French any chance of a last minute attack on Donaldson’s overall narrow lead.

Kemp took  the win, gaining the time bonus plus a handful of seconds at the line over Rutherfordbut the man of the match was Donaldson, 3rd on the day but overall winner from John French who put in a late surge for 4th on stage with Malcolm Whitehead losing a few seconds to go 3rd overall.  Kemp 4th overall, Rutherford down one to 5th, Rose 6th overall.

Kemp won the prestigious over 60s trophy for the fourth time ,having previously been an outright winner in 2010.   The trophy was presented by Mrs Minovi, wife of the late Ray Minovi, former international and tireless worker and promoter on behalf of veteran cyclists.

A great big thank you must go to organiser Mike Amery for saving this race from disappearing last year and doing such a great job again this year and also to everyone of his helpers, local clubs, wives, sponsors and 1st Aiders for helping to give us such a special race.  Also to Ken Jones of Ominpex Bioracer for providing race leaders jerseys. 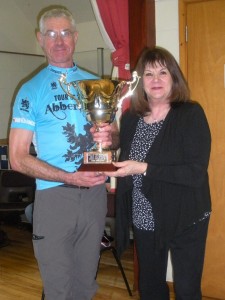