Tim – the master of the bodge repair strikes again

The alarm had gone off and I was just starting to come to, when El rolled over and said ‘Kev do you know what I’d really like?’  Now the males amongst you will appreciate how a question like that can prompt over six hundred thoughts in under a second, all revolving around one subject.  However, as so often in life my hopes were dashed – ‘I’d like it if you didn’t think of every hill you know between here and Rainow and decide to go up them all, try and think of a flat route if you’re leading today’.  Well there’s a challenge a flat route to Rainow  – hmmm.

A brave group of Titch, Mountain bike Tim, James, Jack, Carol, Jim, Golfer Dave, Bruce,  Jules, El and myself set off on my planned flat route.  As we entered Tatton Park El announced that there was something wrong with her gears.  She has a clever accusatory voice that makes me feel that as her mechanic I have let her down badly in situations like this, or perhaps I am just too sensitive.  Examination showed that the gear cable had shred and sheared inside the shifter housing.  As you can imagine I was given lots of helpful? suggestions as to what I could do. Tim (of zip tie fame) suggested wrapping the cable round the headset bolts to keep it under tension and give me an easier gear.  I was suitably dismissive, stating that if I did that it would change gear every time I turned a corner.  Anyway as the guilty party my punishment was that El and I swopped bikes and I found myself riding on a three speed, stuck in the highest gear in the rear sprocket.  This did not bode well as I knew the ‘flat’ route I was planning.

All went well until just short of Pott Shrigley and the famous brickworks climb: whilst struggling up a hill there was a grinding noise and my chain started slipping.  I won’t bore you with the technical details of the bizarre cause.  Oh yes I will, under strain a spacer on the cassette cracked and the whole cassette came loose then jammed tight against the dropouts causing me to lose my only gear as the chain would not sit on the smallest sprocket.  That’s when I ate humble pie and we put Tim’s madcap fix into place: 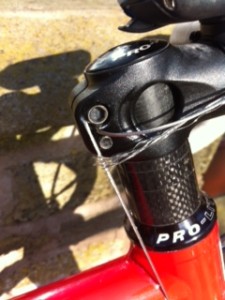 Bugger me it worked, I really should listen to Tim more carefully, he has some great ideas.  All then went well until the café apart from poor Titch who was having increasing problems with a calf muscle and was visibly suffering.  A jovial café stop and a relatively trouble free return, until near Ollerton when Jack came a cropper on some very uneven road and fell.  In the process he tried to hold onto Eleanor and their bikes collided.  In the aftermath, Jack appeared fine, a bit bruised and cut but alive, El’s bike (or rather mine) was not, however, with a snapped spoke and severely buckled wheel.  At this point Titch’s calf was too painful and El and he walked off to the pub, with the cunning plan that I would cycle home and then come back in the car for them.  Well that seemed fair so off we all went.

When I arrived to collect them, Eleanor announced she was leaving me for the lingerie and perfumier mogul that she and Titch had met at the pub, as apparently he promised her that he wouldn’t make her climb up any more hills ever again and that he would guarantee her a life of pampered leisure and a lifelong supply of Christian Dior. She only told me this in the car and when I went back to find him to take him up on the offer he had gone…..