Club Runs are never boring with Chris B

I don’t know how these things happen, I guess it’s destiny (or stupidity) but I found myself leading a club run to Loggerheads with no planning and no Garmin (forgot to charge it). Now I know roughly where Loggerheads is and I’ve been there lots of times and my instinct was to go sort of via Holt but Carol wanted to be dropped off in Chester to see Dan in the Chester marathon and asked that I tell her when she should turn off.  This was a recipe for disaster, especially for Carol so I decided the safest bet was to go through Chester.

As we left the Legion I couldn’t actually remember one complete route.  In fact my mind was a blank of even how to get to Chester on a bike, so I played safe and for time and headed off to some of my training hills.  I think people were getting suspicious as we ignored the normal route to the forest up Norley Lane and went instead for the steeper Beach Lane, followed by a descent back to Kingsley, up Dark Lane and then the tortuous ascent of Waterloo Lane and New Pale Rd to arrive finally in Mouldsworth.  Three significant hills and we could still see Northwich, though the natives were starting to complain, not least Jules who is not a great lover of lumpy routes.  We settled down and followed the normal Llanberis route through Chester and Higher Kinnerton and then my piece de resistance – up Hope Mountain.  This 1 in 4 monster soon split the group and even Tim’s heart rate rose above 110.  We regrouped at the top and then descended, following my very tenuous instincts on the exact way to the café.

The fun then started as we rode through a farm with two yapping dogs and three million thorns, unbeknown to me Chris B punctured  here and Jim, Kev C and Jack stayed to help.  The rest of us continued down to the B5101 and the haven of  familiar territory.  Jules announced he knew where he was as we toiled up the latest hill when Andy (triathlete/iron man) announced he had a puncture.  The ever vigilant leader then noticed he was missing a few riders – 5 to be precise and reluctantly descended to go and find them.  They were all coming the other way with a very smug looking Chris B who had actually managed to change his inner tube all on his own.  The money spent on the three week bike maintenance course had not been wasted!

I turned round and followed them back up the hill I had just descended doing my best Muttley impersonation about incompetent riders who never checked their kit when my eye was nearly taken out by shrapnel from the exploding rear tyre of Chris B.  The noise alone was enough to scare sheep asleep in the nearby fields.  On inspecting the tyre there was a two inch split, certainly unrepairable.  Ever the master of the understatement Chris announced ‘doesn’t look good does it, I wonder how far it is to the nearest pub’.  I think you’ll have to ring to get someone to pick you up was my considered advice.  He didn’t look convinced ‘nah we’ll just have to repair it’  Out of the mouth of babes and the clueless I thought whilst replying ‘we’ll give it a go’ The first attempt was with cardboard but on inflating the tyre it was already bulging.  Then Tim arrived with an empty High 5 energy wrapper which we added to the cardboard still fairly unimpressive.  Then Tim had a brainwave – if only we had some zipties.  Well I wasn’t in the Scouts for nothing and five minutes later the repair was complete: 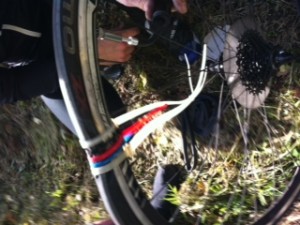 It was agreed that the rest would go to the café and Chris and I would return the 12 miles to Chester to buy a new tyre.  I have to admit that I thought we had two hopes of getting anywhere – Bob and none, however, I put on my most optimistic face and having removed both of Chris’ rear brake blocks to stop him inadvertently braking we set off very slowly.  When I say slowly you will understand if I tell you that we were overtaken by an old woman on a mobility scooter and a young family out walking their dog.

However, as the yards passed the confidence grew and our speed gradually picked up, Chris even did a couple of racing starts at roundabouts and I suffered the final indignity of losing the sprint for the shop.  Yes dear reader we actually made it to the Bike Shop inChester.  At which point Chris announced ‘do you think I need a new tyre this is working fine!!’  Needles to say having looked at the range of high priced top of the range tyres we blagged a free one from the workshop.  Repair made we then flew home down the bypass.  I don’t know how many miles we did, how many feet we ascended nor what my average heart rate was but it’s a ride I’ll never forget.