Today was a great day to be out on the bike; clear skies and fairly dry roads. Just about perfect aside from the strong headwind. My theory is that the winter wind is harder to get through as it is colder and hence denser. Is there any weight to this?

The long run was not particularly long but it was a challenging day and the (fool)hardy volunteers were Kris Z, Jim, Colin, Paul G, Tall Paul, Mark, Ewart and myself.

Jim and Kris led us through Hartford and Davenham, setting the tempo and mood for the day which could be described as ‘Moving Along Nicely’. After a short while we had a nice rotating front, each rider taking 10 minute turns before moving back down the line. Just after Swettenham Ewart, who had been hanging a little bit off the back of the group, peeled off and went his own way.

The other side of Congleton gave us the first climb of the day, the rolling piece of road which is sometimes called The Cloud. Whatever it’s called it always wakes you up. I was on my winter bike for the first time this year and apart from the geometry being different to the summer bike and hence giving aches in places I haven’t had before, it is about a stone heavier than the summer bike and this was a bit of a shock to say the least.

We regrouped as necessary and for a change went along the A523 towards Rushton Spencer, Tall Paul dragging us along up the hills. Tantalisingly in the distance were 3 riders and Kris couldn’t contain himself, jumping off the front in pursuit. Paul thought that Kris was just taking his turn on the front so didn’t close the gap. Several of us got on Kris’ wheel and we hunted the 3 riders down, despatching them in short order. This is what grown-ups do.

Turning left off the main road there was a short descent into that wind and to Meerbrook and the warmth of the waiting café.

Comestibles devoured and beverages downed we were once again on the road, gunning up Gun Hill and from there to Wincle. My rear mech ended up in my spokes at the bottom of a steep rise and I had to get off to sort it out before chasing, eventually catching up near the Four Ways Inn on the A54. We crossed over the A54 and up the lane towards Sutton. Descending I hit a pot hole and got a rear flat. It was a good excuse for a breather I suppose. After the repair and on the other side of Sutton I again went down a pot hole and this time got a front flat. The group were not so grateful of the rest this time but were generous with their comments on the quality of my machine. Thank you Paul for lending me a tube.

The route home was the usual flat way through Gawsworth, Siddington and Lower Withington. Kris was good enough to string things along at a fair rate a couple of times before we got ourselves organised again taking 10 minute turns. This way we comfortably managed well over 20mph for mile after mile.

Getting to the 3 Greyhounds several people peeled off to go home and at this point things got a little excited and the turns on the front were harder and more committed. I got on the front going in to Allostock but as I did so I heard a strange clicking noise coming from the rear of my bike. After a while I decided I needed to investigate the clicking and slowed a little just as Kris came to the front hard. Everyone got on his wheel and chased away just as my rear tyre exploded, I shouted but they were gone at 30mph. 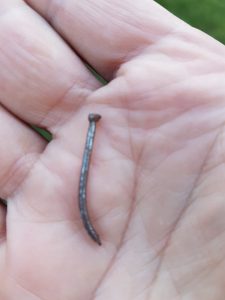 I had picked up a nail and the puncture completely destroyed the tyre and tube, the bike un-rideable. Standing in someone’s driveway, I had just got my phone out to call for help when the homeowners returned, a couple in their late 60’s.

And so my final miles today were in a Mini driven by a very nice gentleman who likes to jump off mountains whilst wearing skis.

A fantastic day, thanks Jim for leading and everyone else for the banter.

Road Runs
With the benefit of hindsight….
The no-photo, no-sliced bread, no eggs, shorty-short run