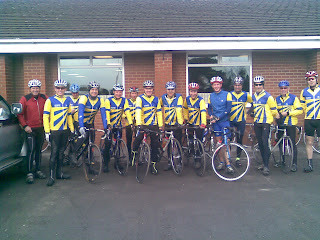 Well Kev and I turned up at the Royal Legion at 8 a.m. (having intelligently put the clock forward not back) thinking it was 10 a.m. – and couldn’t work out why there was nobody else there. Maybe they’d started at 9.30 – so we set off like bats out of hell towards Prees to catch them up – then at the top of the hill at Whitegate realised we’d got it badly wrong!! So we rode home, had a cup of coffee, consoled ourselves for the missed opportunity of a lie-in and made it back to the Royal Legion at 10 a.m., with a vague feeling of deja vu and much ribaldry from various club members who questioned how on earth we manage to hold jobs down. Good question I say!

The long ride was to Prees and a group of 15 made it all the way – Julian, Adrian, Chris, Gareth, Derek, Dennis, Garry, Jed, Kevin, Chris Latter, Nick B, Dave Astles, John Conboy and Kev and me. Apologies to anyone I’ve forgotten!

The ride out was fast and the roads very muddy, which challenged those of us with the new slimline crudcatcher mudguards – mine kept clogging up with mud which created a ridiculous amount of resistance, not that anyone had any sympathy: I think the general feeling was that this was a good thing as it kept me quiet!

The ride back got a bit silly along the Peckforton road as the racers decided to go for it – unfortunately Jed got caught in a melee when an approaching car caused a sudden
de-acceleration – he had a bad fall and ended up with an injured shoulder, hand and knee. He was also concussed – which affected his short-term memory (he couldn’t remember the incident at all) but not his speed – we were all carefully nursing him back home at a nice steady pace when he decided he’d had enough of going slowly, got to the front and established a cracking pace, leaving us all breathing out of our ears. I hope you’re alright Jed, do let us know.

Anyway this was a good run, I found it very hard (not just because of the crudcatchers, I’m just not fit enough having missed several weeks of club runs). Kev and I did 79 miles at an average speed of 16.6mph, but that includes our unnecessary early morning mileage too!