The challenge to find the Rickshaw, err, challenge. 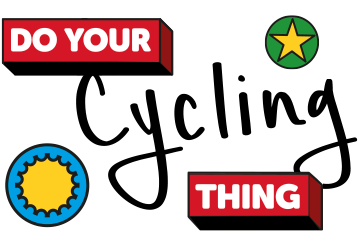 Al had a good idea. As this year’s Children In Need Rickshaw Challenge was to pass within a hair’s breadth of us (well as near as Chelford anyway), Al thought it would be good and indeed different for us to ride down to see if we could cheer on the challenge, which was to ride from Cannock to Salford today. This was day 4 of a 9 day, 500 mile ride – pedalling a Rickshaw!

We weren’t sure of the schedule, so armed with every technological aid (well, a smartphone with a live tracker from the website), Al would check periodically as we rode out, to see where the intrepid pedallers were.

And so we set off, a reasonably sized group, accompanied by new rider Pete, joining us for his first outing into the chilly but sunny November morning.

Terry exercised his many years of experience near Davenham, as a sizeable leaf blew into his face, blocking most of his vision. He as going uphill so didn’t take his hands of the bars. He merely ignored the alien face hugger and gracefuly came to a stop before removing the offending local flora. ‘I could just about see around either side of the leaf’ he said casually. Skills.

Jim also had his rear light with inbuilt video camera, recording merrily away. None of us made faces, or gesticulated inappropriately during the ride of course when cycling behind Jim.

It was clear from the progress of the Challengers today that it would not be a fast day for them. Travelling north into a chilly headwind is tough enough for anyone, not least these guys. Chapeau.

We therefore cycled on, and decided that the cafe stop must come first, with a hunt later on after we had feasted.

We mused about a visit to a previous haunt at Old Hall Farm in Alsager, but as din-dins was beckoning, we stopped at Astbury Garden Centre instead.

A feast it was, with may cakes on offer, I though Al may have had a heart attack. Not to be though, as despite the veritable cornucopia of cakey confectionary, Al quickly focussed (as can be seen by the fact that Al made everything else go slightly out of focus) on Cherry Pie and custard. We were sold. 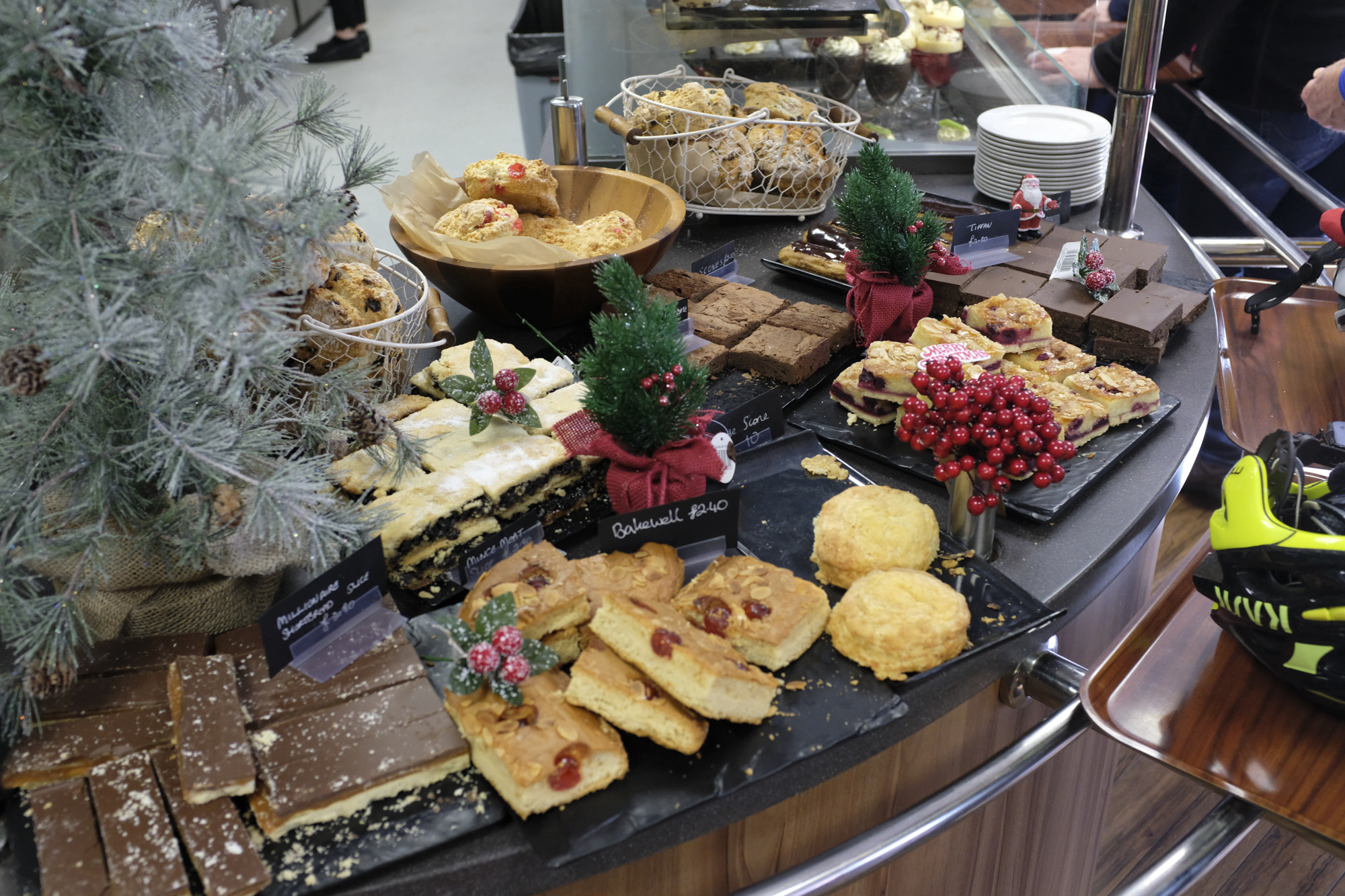 A veritable…. well, you get it. 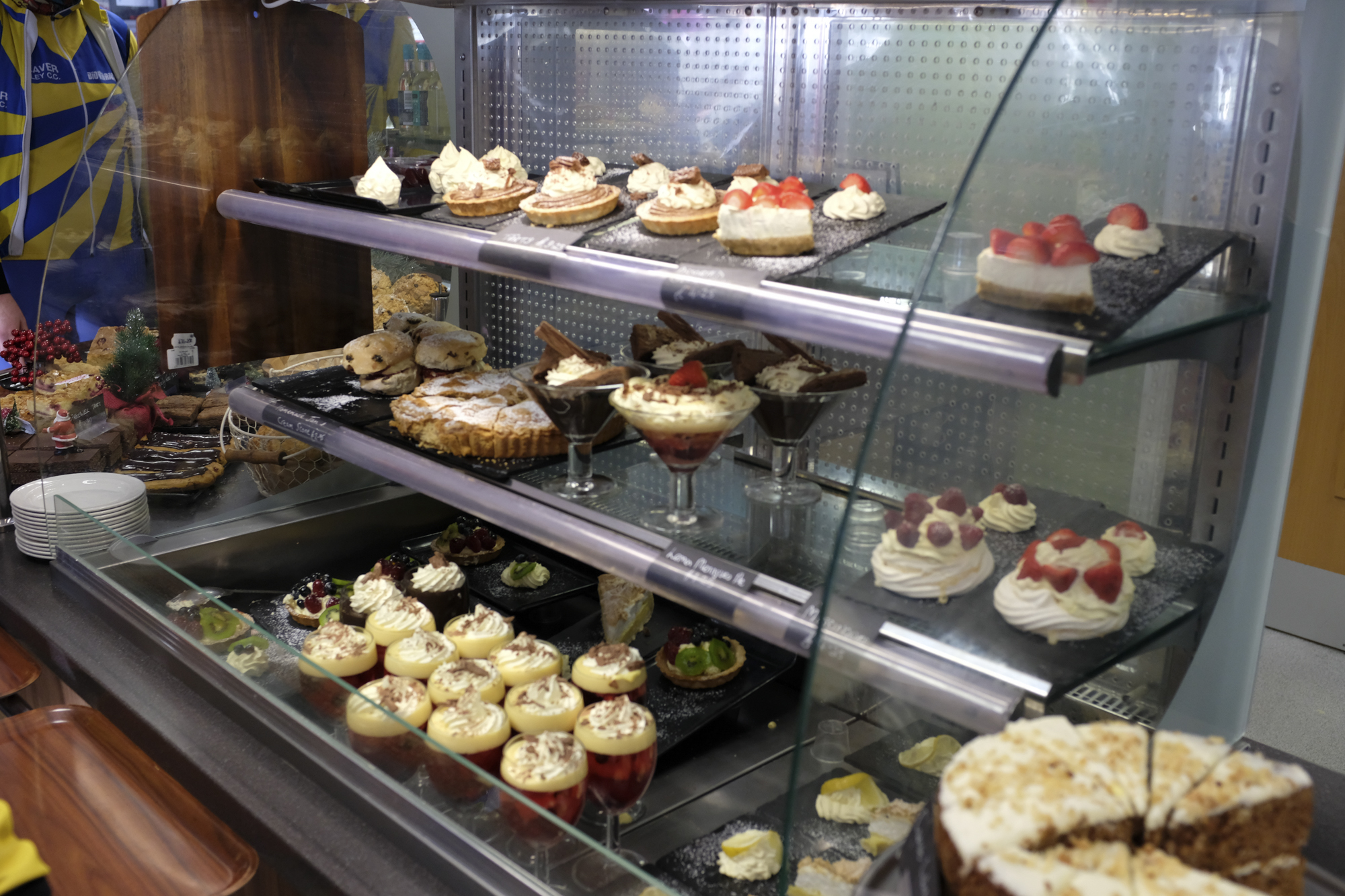 You’ve just put on 2 lbs looking at this photograph. Look away. 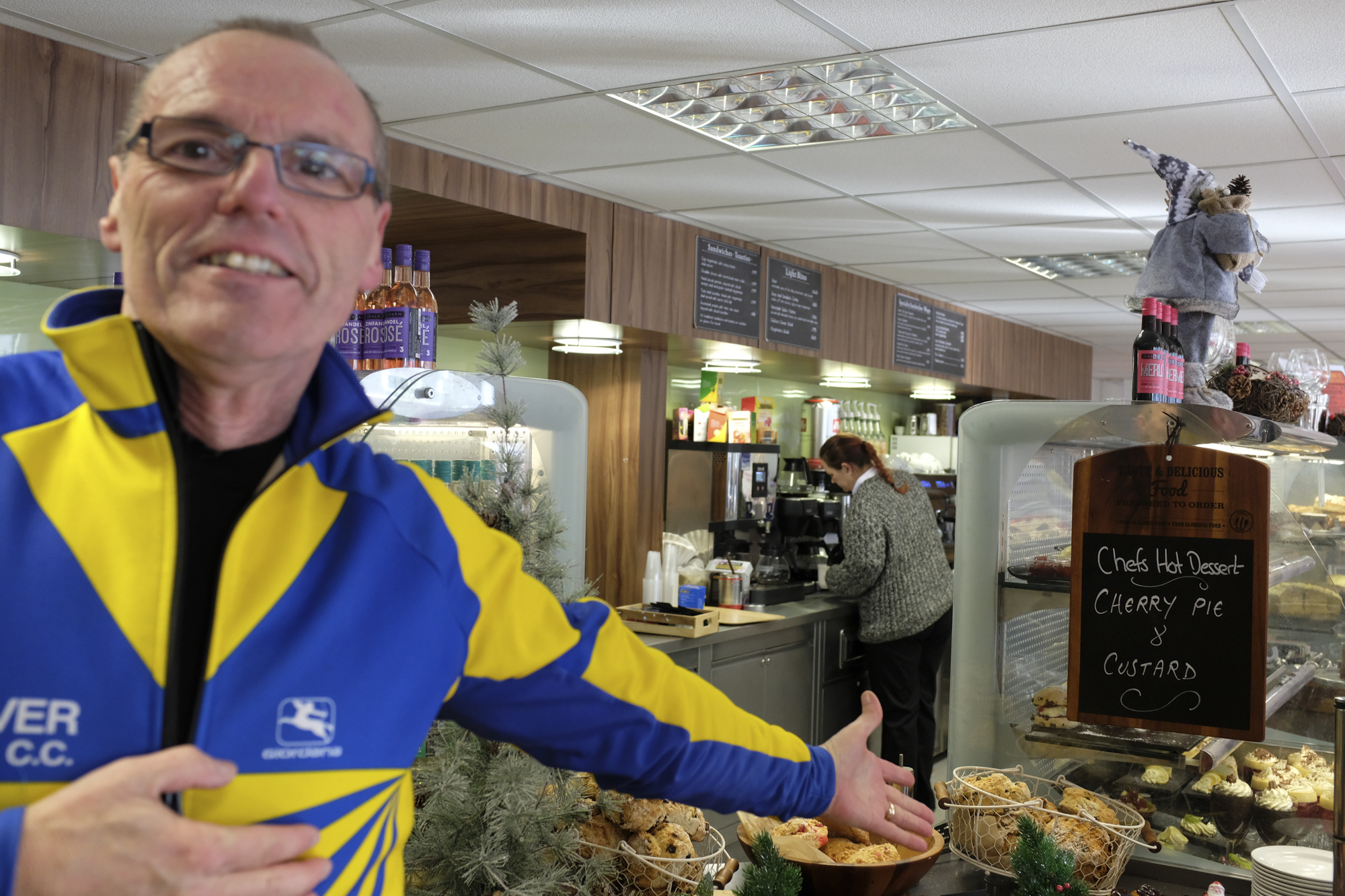 Whilst waiting, Jim also asked us how his father Christmas beard was getting on, along with his Father Christmas suit, that he was wearing under his club kit, as can be seen. 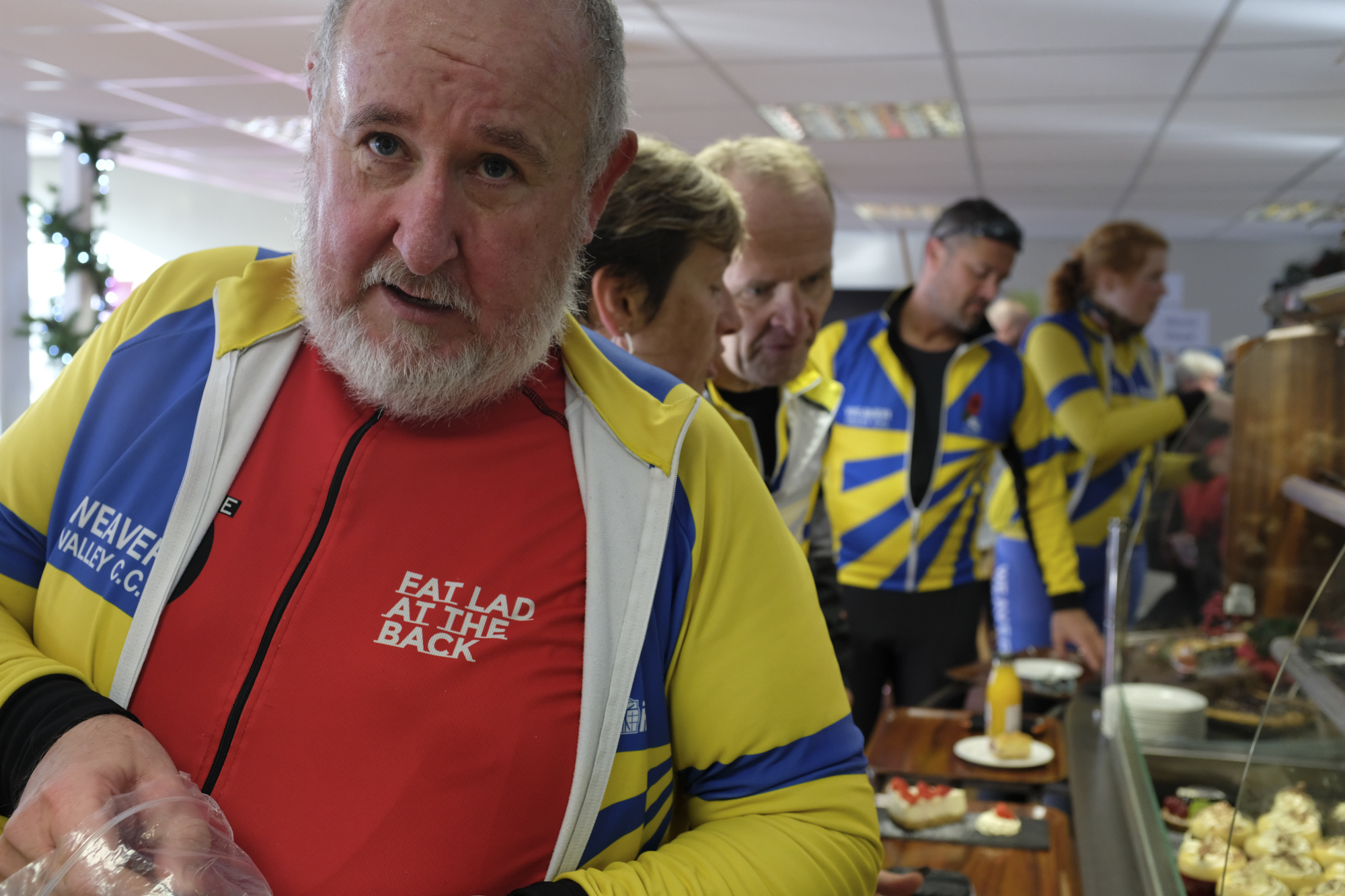 Interlude (totally irrelevant, as this blog seems to be at the moment):

After the meal, Em decided to show off the first in her winter collection of socks. See below: 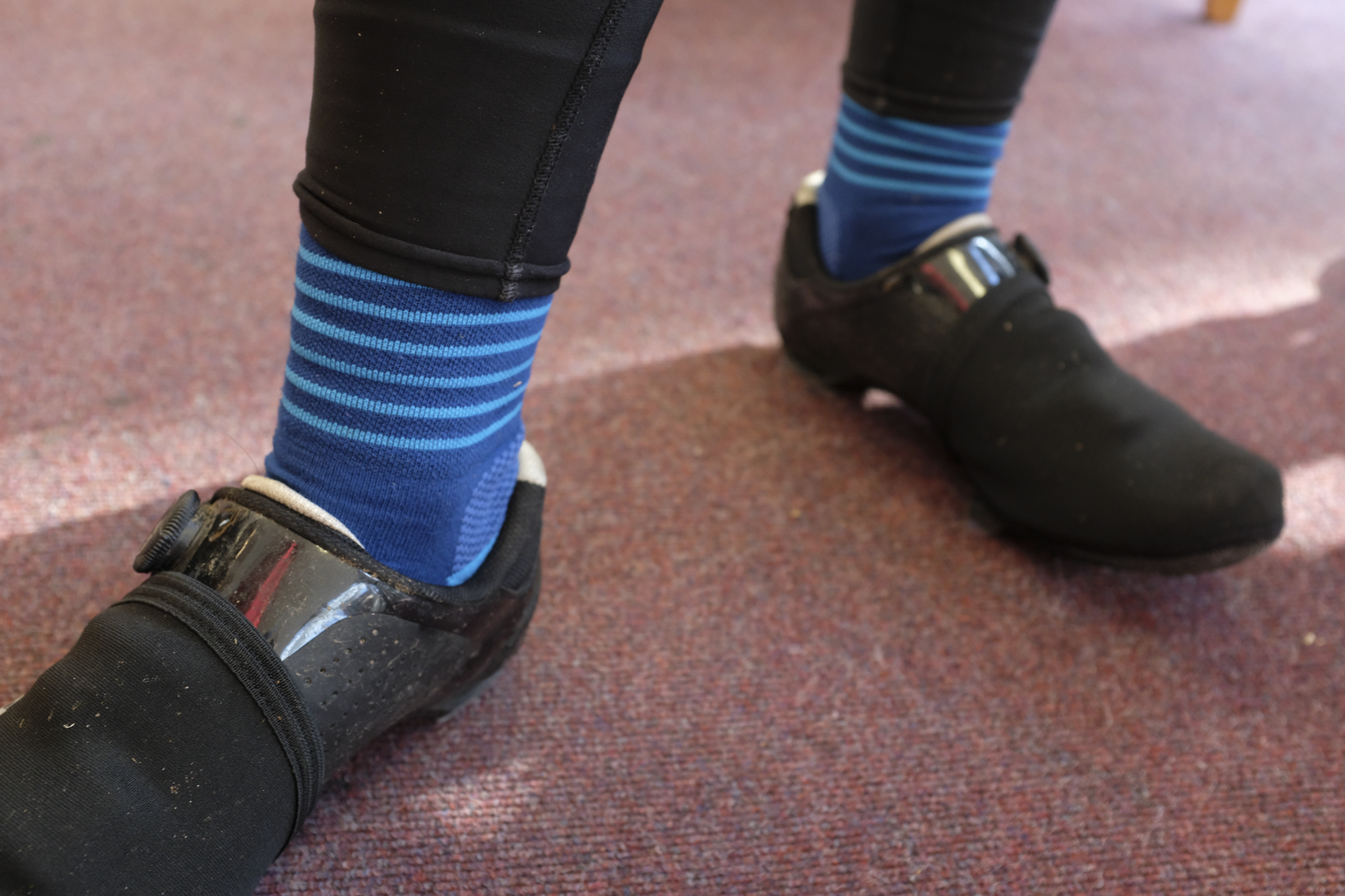 Contextually, this is due to previous images taken, yet not published of more summery sock delight, worn by our two red haired models, Emily and Elaine, back in September. 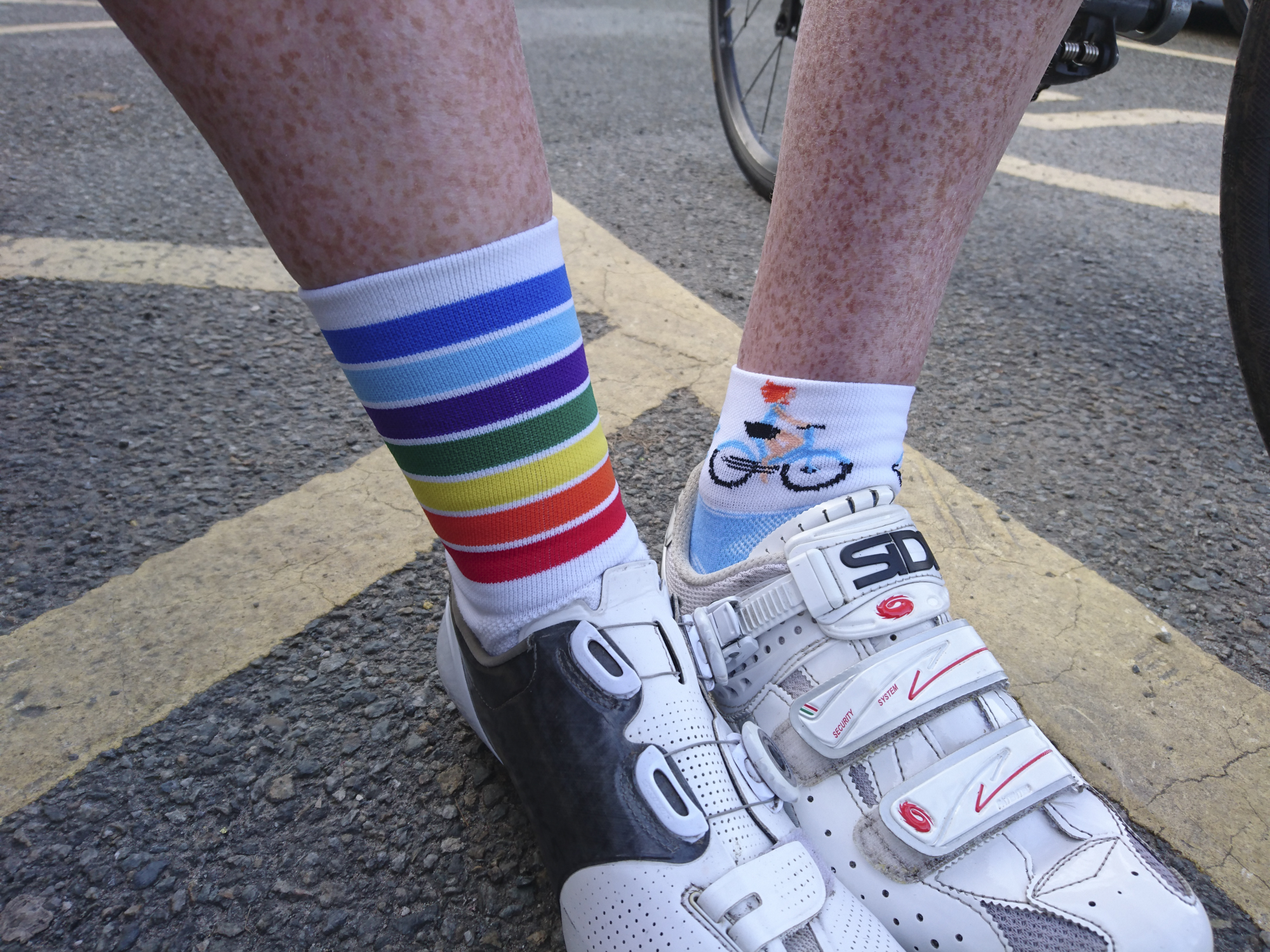 From the summer collection. 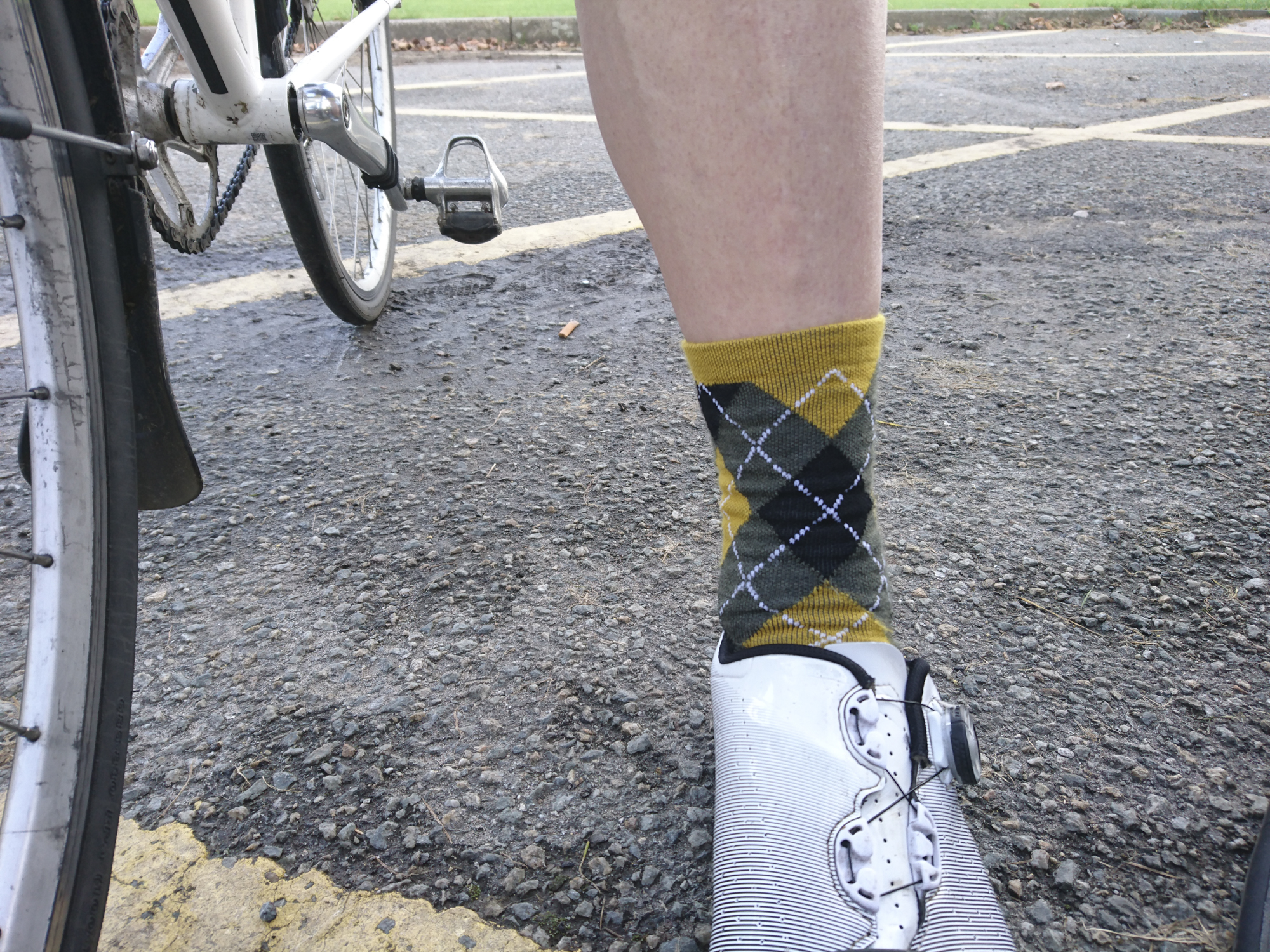 Sported by Jim back in the summer, from the Grandad collection.

Back to the story:

So, we togged up and left, heading south to a point that looked like more of a reasonable place to be able to spot the intrepid crew from the challenge.

We parked up by a pub, and waited to see those that we came to support. 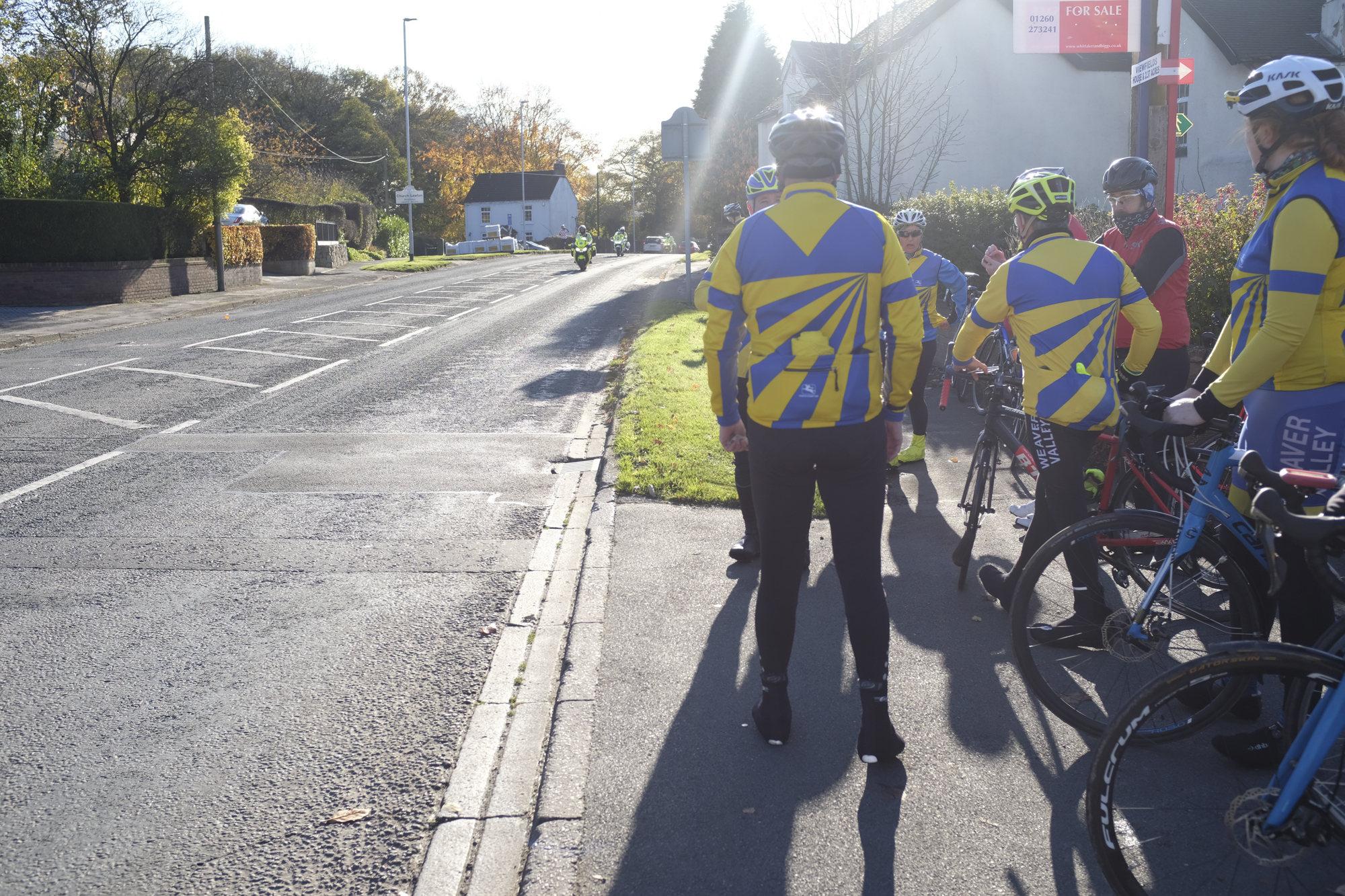 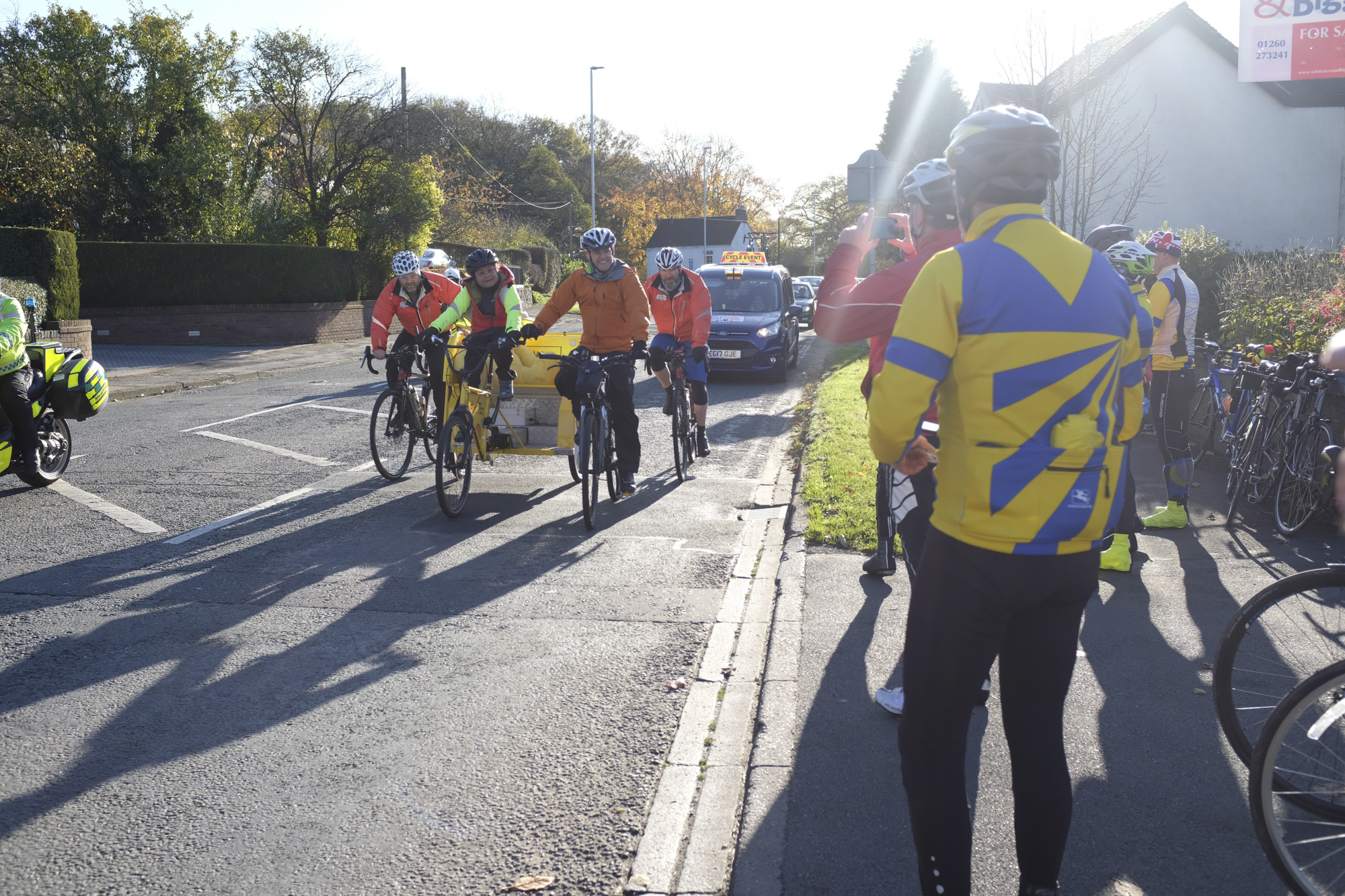 Out of the sun, Matt Baker and eighteen year old Sabah, smiling at the waving, and photographing supporters from WVCC. 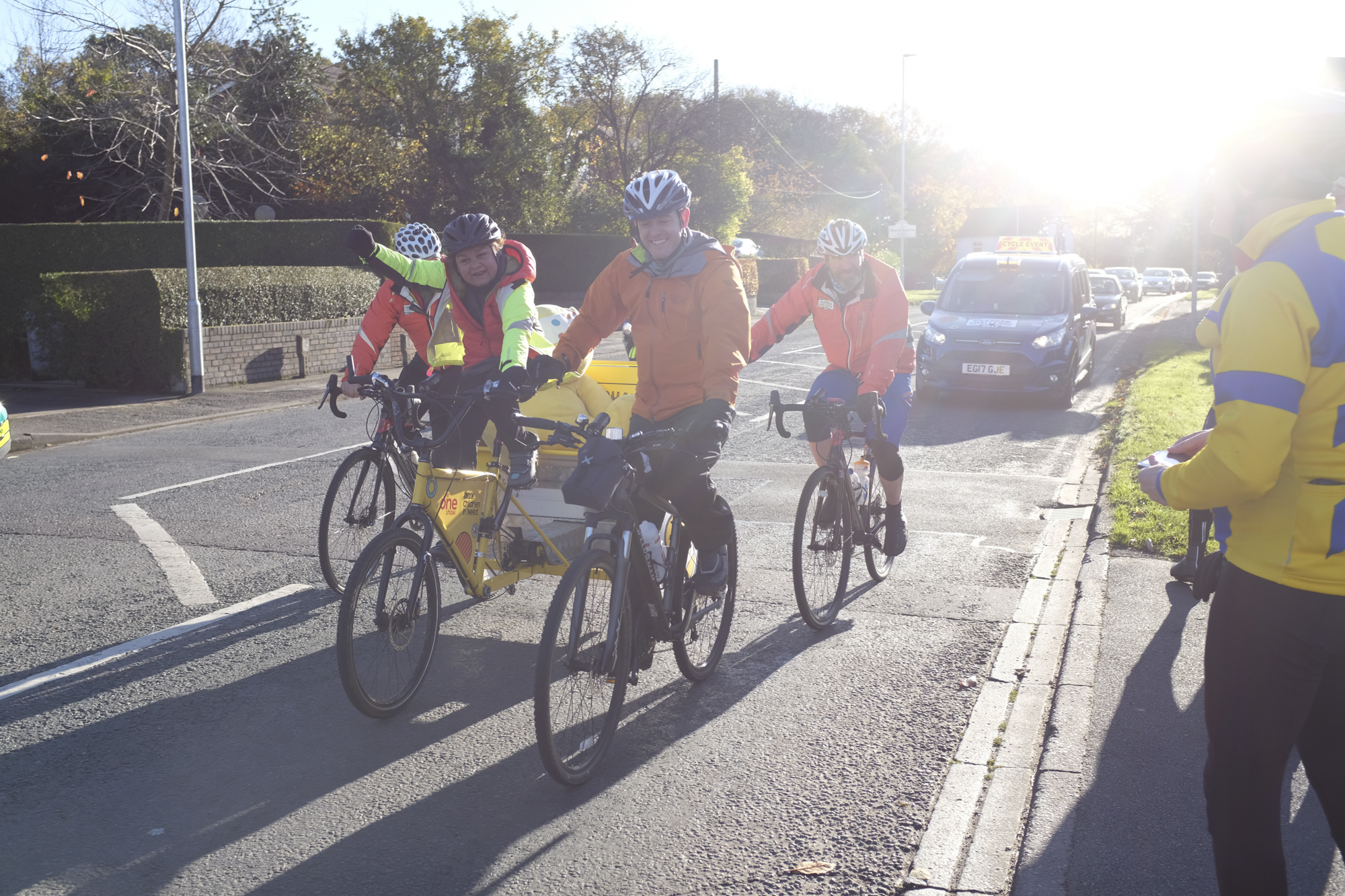 Out of the glare, and with a big wave from Sabah, they were on their way.

A fantastic ride, and a worthy cause, that I’d encourage those in the club to support. This can be done easily by clicking this link BBC Children in Need Rickshaw Challenge and clicking the Donate link at the top of the page. Here you can donate as much or as little as you want, and if you are a UK taxpayer, claim Gift Aid with your donation, giving more to the charity.

Following the fun, we turned and headed for home through familiar lanes in the autumn sun, unfortunately accompanied by a cold northerly headwind!

A great day out again on the bike, and great to be there to support the Rickshaw Challenge.