With a looming Llanberis I fully expected a huge and heaving contingent this morning, dozens of excited and eager racing snakes looking to pile in some hilly miles, cyclists chomping at the bars to get some last minute distance in. Five. That was it, 5 poor unfortunate souls shivering in the porch of the rugby club. Including me. That a little bit of rain and sub-zero temperatures should keep so many away was surprising, OK so I couldn’t feel my fingers by the time I got to the club but do you really need all of those fingers anyway? Frostbitten fingers means less weight to carry, ideal for the hills.

Anyway Alan, Alex, Anthony, Colin and Me were foolhardy enough to venture out this morning. Alan said straight away that he was going immediately home, probably to laugh hysterically at the thought crazy people while cupping a nice hot brew.

As the wind was coming from that direction, Alex, Anthony, Colin and Me agreed we would head in the general direction of Holt and see how we got on, at least that would mean a tail-wind home. Out through Weaverham I advanced the idea to the others that, as we were wet and cold anyway we may as well make the most of it and get some miles in so why not head out to Loggerheads? My suggestion was met with tepid enthusiasm but amazingly all agreed.

Out through the forest and the rain was being particularly wet and just to add to the excitement, it was just above freezing. At the other end of the forest Colin posited that it would be far more sensible to draw an instant line under this madness and get home forthwith. Unfortunately Alex was drawn in to this folly so they both turned off in search of somewhere warm and dry.

Just Anthony and Me then. I asked him what he thought of the Loggerheads idea and he said he’d be game to get to Chester at least and see how he felt. Chester was very quickly reached, the rain easing a little and the headwind not too strong. Going through the city i asked if he was still up for it and, to my surprise he answered in the affirmative.

We swiftly got through the Kinnertons and on to the meandering road to the base of the Treuddyn climb. It was on this road that we saw the first of many cars that looked like they  had had a dump truck of snow poured on them. ‘Promising this’, I thought. Onto and up the Treuddyn climb and the snow had started, the higher we went the harder it got and along with the temperature dropping to well below zero it was a real slog. Cycling is so much fun in a blizzard at minus 10! 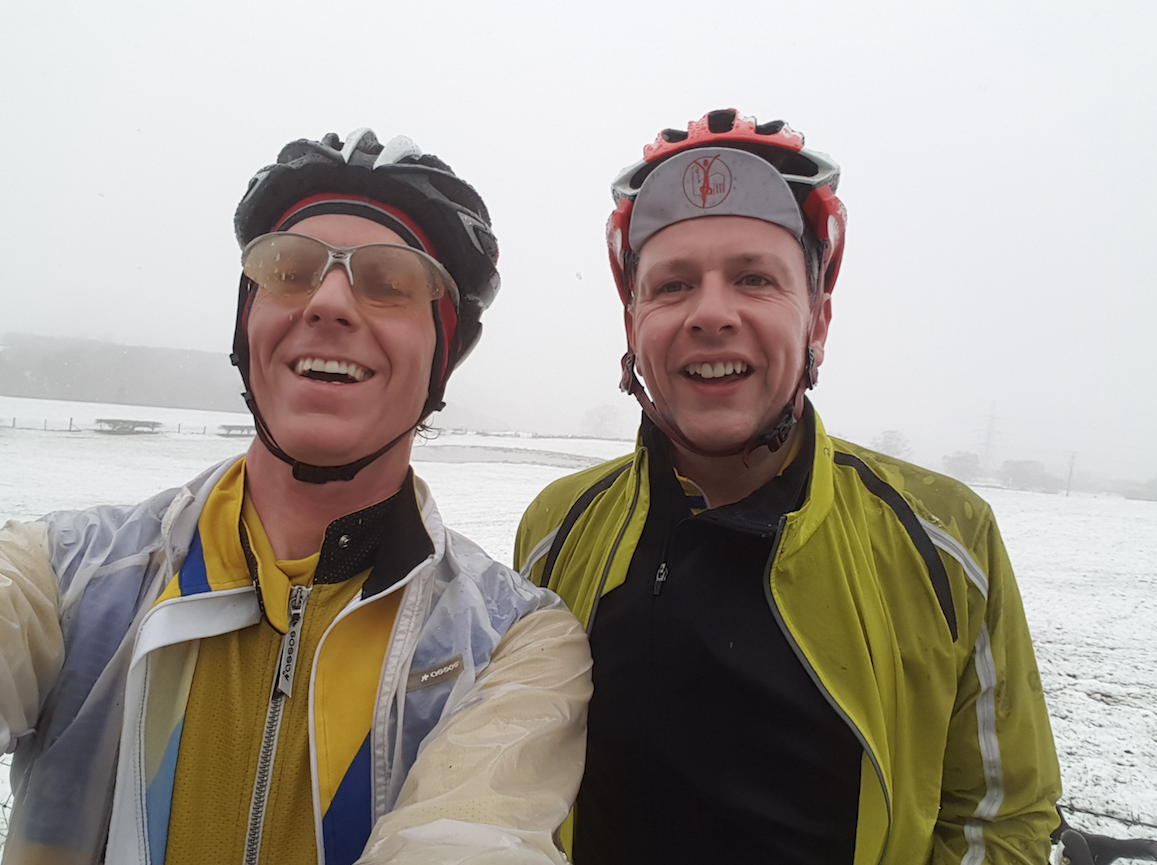 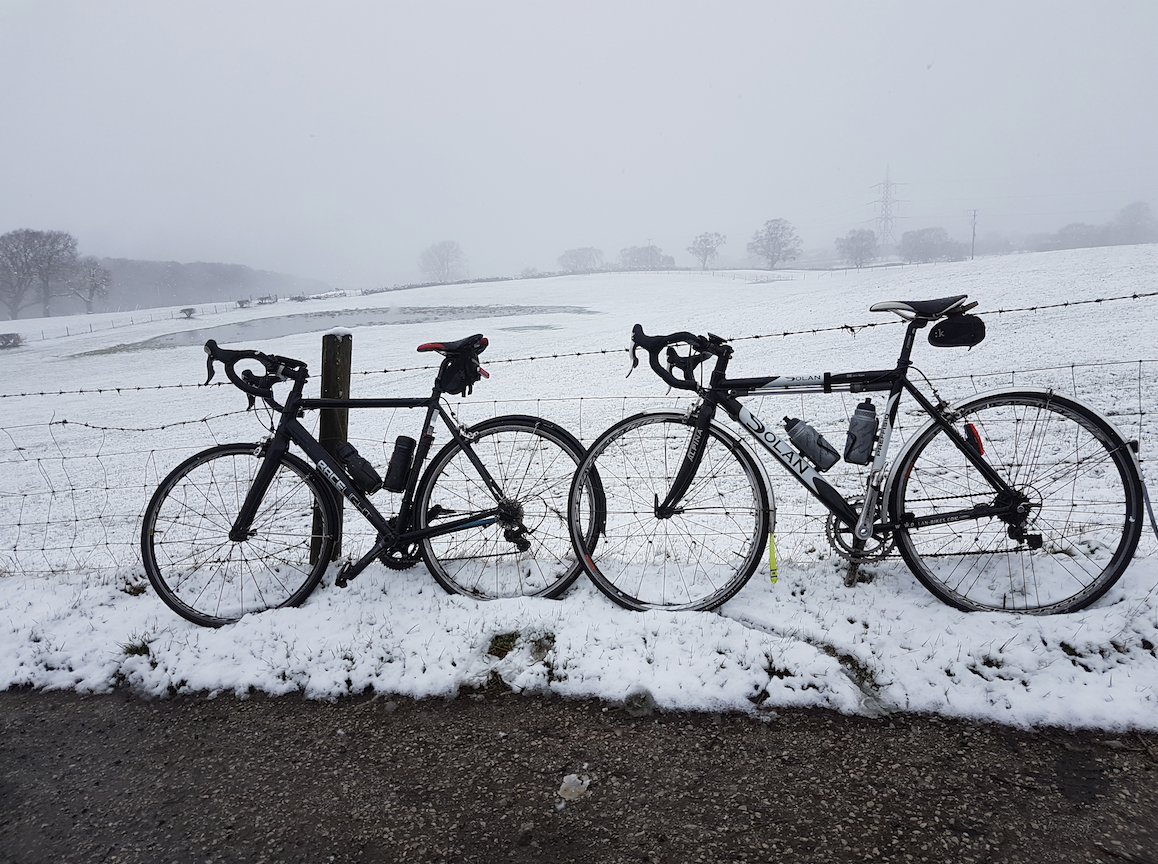 At the top of the climb we stopped for a breather and a quick picture before the winding descent to Loggerheads which was really slushy and pretty sketchy in places but at least the view in the distance was great with snowy hills all around. A few hundred yards before the cafe and the road had been closed (I have just found out that sadly there had been a fatality on the road there earlier in the day). The police let us through and we rode on the pavement to the cafe. 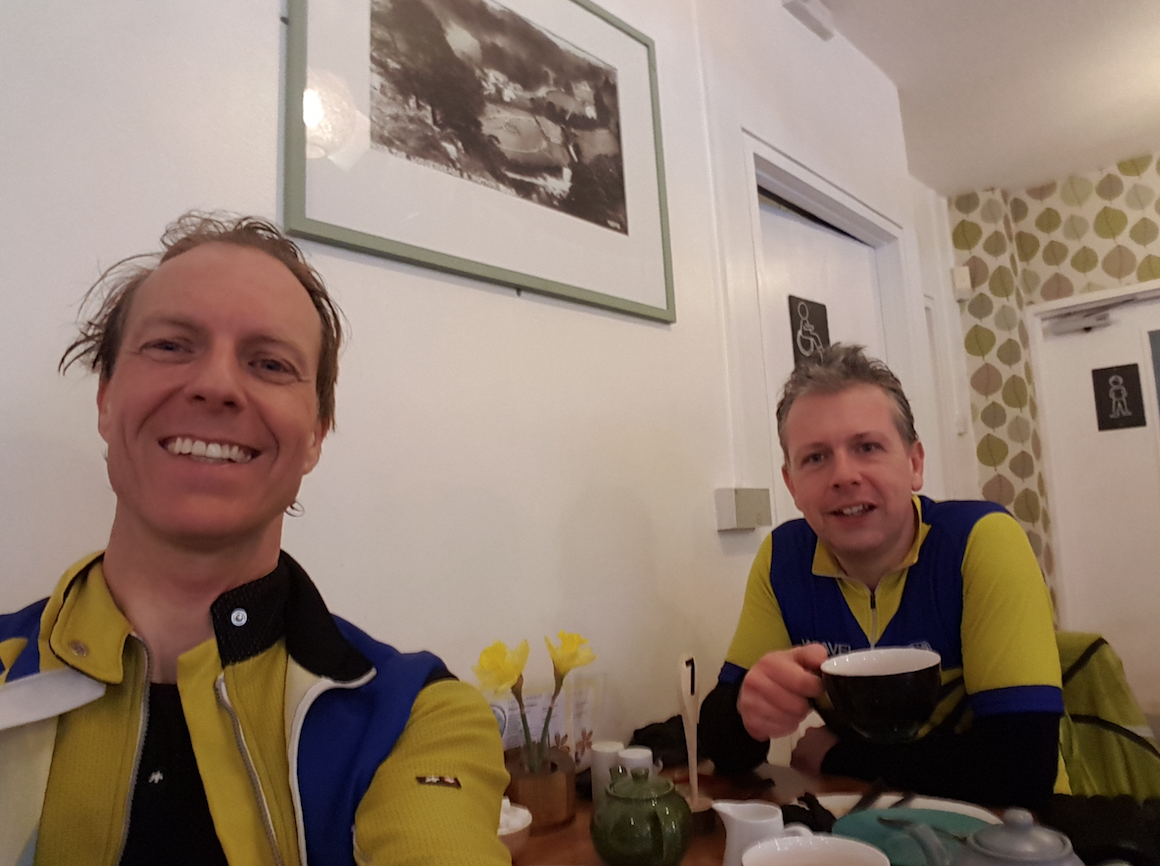 The cafe was quite busy which was a surprise as i thought we would be able to take our pick of table. The usual was ordered and we sat down next to a radiator which bizarrely was not turned on. Food was served quickly which was good as by the time we had eaten I was shivering quite badly. I went in to the loo and dried my hat and warmed my gloves with the hand dryer. Anthony had gone the sensible route and brought spare gloves. Getting back out and Anthony was not up for extra miles around the lanes of Cilcain so we took the main road home and thoughtfully on the other side of the Rainbow the snow had turned back to heavy rain.

The rain eased again through Kinnerton and I suggested that, instead of returning directly we go home via the Dee and past the Mills but without stopping there. This was agreed to so that’s what we did. By the time we got to Capenhurst the rain had ceased and it was a positively summery 2 degrees, so warm in fact that we stopped so I could take my cape off. Cheshire Oaks, Mickle Trafford ticked off and we got as far as the forest before the rain started again, quickly getting fully wet. We stopped, cape on.

I said goodbye to Anthony just before Northwich and I plodded along in the quickening gloom, putting in just a few extra miles to get home with exactly 100 covered.

A super tough day today, Anthony is really strong and great company, we chatted all day about every subject under the sun (or snow and rain).

See you all soon!