Summertrees and lots of climbing… 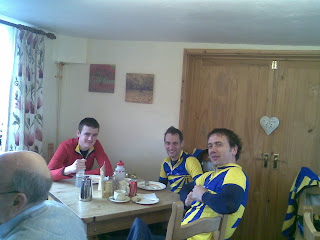 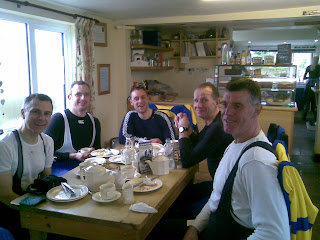 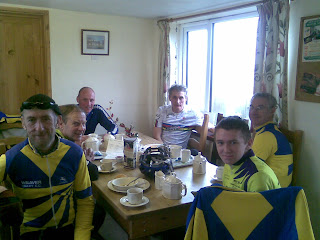 Above – the best bit – lunch at the cafe! WVCC takes over Summertrees cafe…
Well ever since I started riding with WVCC I’ve been persuaded that if I want to be a good bike rider I’ve got to learn to love hills – so with some trepidation I agreed to go on the longer ride to Summertrees – which we were warned would involve some hills. But I also remember being advised that once you’ve gained height, don’t lose it. Well we did plenty of that, up and down then back up again, all round Kingsley and Frodsham, then over to Delamere Forest, then up the Keld and round the back of Kelsall to reach Summertrees via Chapel Lane. And to be honest, despite the fact that my legs were dead (mountain biking yesterday) and I was at the back of the group for most of the ride, I did really enjoy it – even though the weather wasn’t great this is a beautiful part of Cheshire and none of the hills are that bad really (well at least not in retrospect). We had a bit of a contretemps where Dark Ark Lane meets the road through Delamere Forest and somehow both Julian and Keith came off their bikes at some speed, but they were both unhurt thankfully.
Seventeen of us made it to Summertrees: Chris, Matt, Ben (for the first time on the longer ride, and he looked very strong), Jed, Graham, Ewart, Keith, Julian, Max (back from Oz), Dylan, Richard Munro, Alan, Peter, Kev and me – Craig and Kevin C. got there but didn’t stop. Great riding from teenagers Dylan and Matt, but we’re getting used to that!
We then split, with Alan taking a group out via Tattenhall and the rest of us straight home via Cotebrook – it was raining heavily by this time and we were glad to get home for a welcome bath, tea and cake, and in Kev’s case, the rugby!
Thanks Graham for leading the ride.
Posted by Eleanor.
Road Runs
Well we didn’t quite make it to Bangor on Dee – a report from Jed
Hit the North 12 Feb 2011