Another frosty start to Sundays proceedings with the 2nd event of 4. This initially should have been held at Audlem, unfortunately, due to Roadworks, the organisers managed to get a last minute change through the police so we were back at Swynnerton.

By the time the race started at 10 am, the the sun was out, but it was still a fresh, conditions were perfect.

There were many more entrants this week, 39 starting race 1  (under 50’s), provision were there in force with Elite rider Ben Joughin. Kris was marshaling, Jules started his first race race of the season and joined and Mark Astles and myself. The race was again neutralised for a mile or so, and as soon as the horns pipped 3 times, the race race exploded, Ben Palmer for DHR shot past, Mark raced on, followed by myself, soon everyone was there, we all relaxed, then Ben went again, this time he was left to go, he was caught again as we passed the army camp, it was quite a rapid start to the race, with plenty of PBs record on my Strava, there were already a few off the back never to be seen again.

Up the rise followed by a draggy straight before we passed the finish line for the first time, the climb keeps going, another attack and a break went on the brow of the highest part of the course, it must have been about 10-12 strong. By this point Jules and Mark were also unable to hold the pace as they were gently eased off the back and subsequently joined the 2nd race.

Once the break had gone, the race settled down, and at some points just felt like a fast club run, as the same few people were doing turns on the front, with signs of no through and off. It was pretty uneventful then apart from a couple of half hearted attacks until the last lap, we passed the bell, up the big climb for the final time, and one of the Kuota guys sprinted off the front, we went over the brow, down the hill to a left turn, I decided to give a it a go, but the bunch were soon chasing me down so I sat up. Two or three of us did some works to catch the Kuota guy, and after a couple of miles he was in striking distance, but we agreed to leave him out to dry, the problem then was, once we stopped chasing him, everyone relaxed again so he got away again. I again tried to bridge the gap on my own, but again I was chased down. It took a concerted effort by myself and a Provision guy about 2 or 3 miles before the finish to catch him.

We then had the last climb before the draggy sprint, i was careful not to get on the front, but to be in a position where i wasn’t boxed in, I was dissapointed to see those had not stuck their nose on the front of the race sail past me, but hey, that’s the way it goes. I was however by surprised by my sprint and held off quite a few, which gave me 16th overall and 6th in my age category.

Next week, we are back at Swynnerton again, which Jules is thrilled about 😉 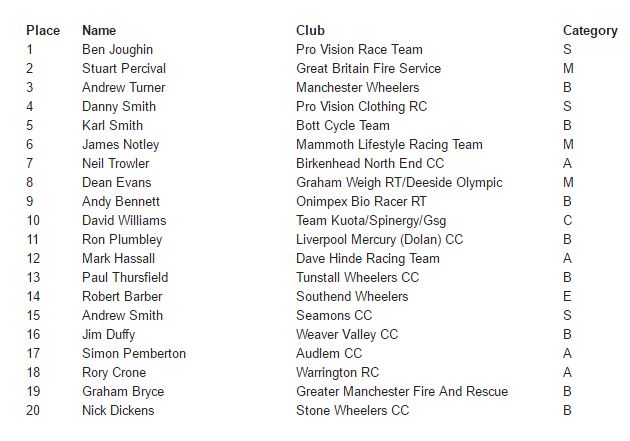