My morning started by reading the results for Kevan Underhill’s exploits for the tour of the Abbeleys, I did giggle to myself when I read the advice from Kempy, “just clip off the front” he said, if only it was easy as that!!!

Anyway, on to my race, this was my third race in this series and the last after last weeks marshalling duties. This was a change in circuit, the 10/11 miles circuit just south of Audlem, another rolling course, but not quite as hard as Sywnnerton the previous 3 weeks. I was in the first race, under 50’s.

I arrived early and kept thinking, Jules will be here in a minute, minutes passed, Jules never arrived, so I was the sole WVCC representative.

The race started in quite a calamitous way, with one away from the off, the lead car and motorbike were nowhere to be seen, I was at the rear of the peloton, and we all rode past the first left turn!!!, not sure where the marshals were, anyway, we all turned round, and I was on the front, it was just like what we do in a club run to get Ewart on the front 😂😂😂😂

We hit the first hill, and all the favourites kicked, this included the supper strong Chris Quinn, Ryan Pike and Mike Jolley, there were 8 away. The bunch then relaxed, once we had completed the first lap, Simon Bridge rode off the front, he rode for what seemed to be an age, about 200 meters in front of the bunch, then into the headwind, a couple more guys made it over to him, but they were soon reeled back over the next lap.

I tried a couple of times to get away, once with Chris Spencer, but I find it hard to pick the right moment. As ever there was a reluctance from many to go though and off, so a few times, I found myself on the front in the head wind.

We entered the last lap, Simon Bridge was doing some massive turns on the front, he was assisted by a rider from Leek CC, I was siting in 4th wheel, trying to be careful not to get stuck on the front, once we turned into the headwind, the Leek rider peeled off, and the Horwich rider who was in front of me, slowed too, reluctant to take the pain, Bridgey, carried on, I came through a few times, feeling obliged to help. We started the last climb about 5 miles before the finish, by this time, Chris Spencer was just in front of me, I watched as he dropped his gears by a couple, and he was off, I followed him, we got to the top and turned left, 4 miles to go, Bridgey went for a long one and opened a gap,  the rider from Horwich was struggling, Spencer then went, with Kempys advice still ringing in my ears, I thought it’s now or never, I knew most of the remaining profile suited me as it was rolling down hill and the wind was behind me so I “clipped off the front” of the pack to chace Spencer down, I looked behind and I had opened a gap, I caught Spencer and passed him, “come on on I shouted” we the worked together to try and chace Bridgey down. We took the last left turn with about a mile to go, still 7 or 8 seconds behind Bridgey, but more importantly, 9 or 10 seconds in front of the peloton. We were never going to catch Si, we eased back slightly, half a mile to go, I could see the pack chasing us down, I sprinted off Chris, I just didn’t want the bunch to catch us, Chris came back, then nailed it in the sprint for the line, leaving me 3rd out of the 3 that got away in the second group, but still 5 or 6 seconds ahead of the group.

I came 11th overall, but 4th in my age category (cat B), nice to have a little bit of success, even if it wasn’t the main break.

A thoroughly enjoyable race and series. 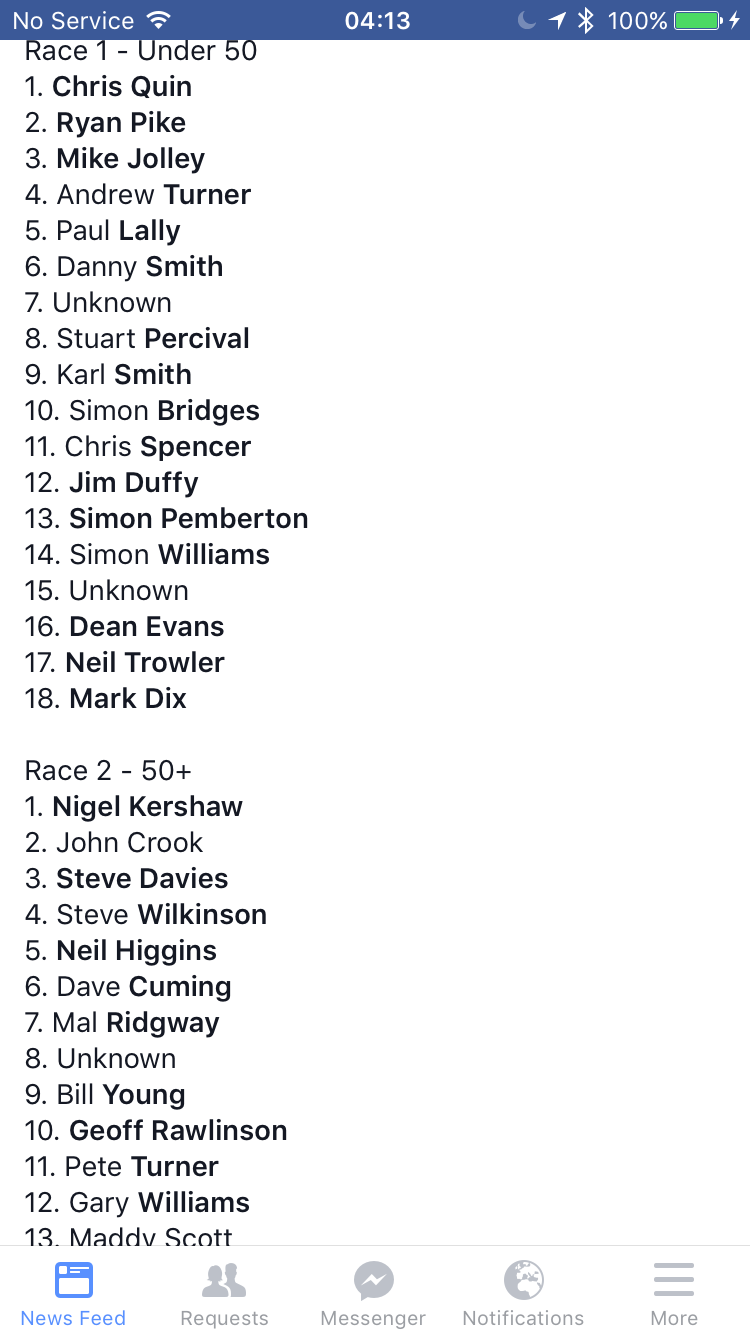 Rider 7 didn’t exist, so everyone moves up one