Well for a short club run, it ended up quite long. Quite right too, given that we’d got the gap in the recent wind and rain.

So, a fantastic sunny start greeted us as we met as per usual. What we hadn’t counted on was the sight that was to greet us as Al turned up. Now sometimes, I call Al the pet name ‘Big Al’. Well, now it’s perfectly fitting. After 2 weeks all inclusive at a resort in Croatia, Alan had managed to max-out on all his addictions, and has come back a stone heavier (yes, really, a stone)! 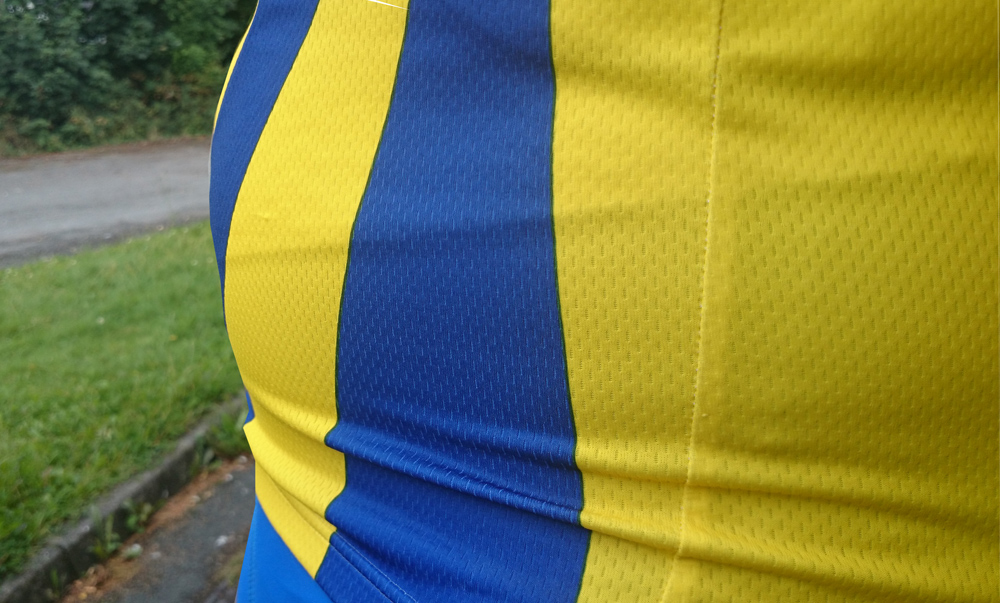 A perfect day then to work off the holiday excess, although Jim did day that he was welcome to borrow his jacket (below), even though the Dragon’s wouldn’t invest*. 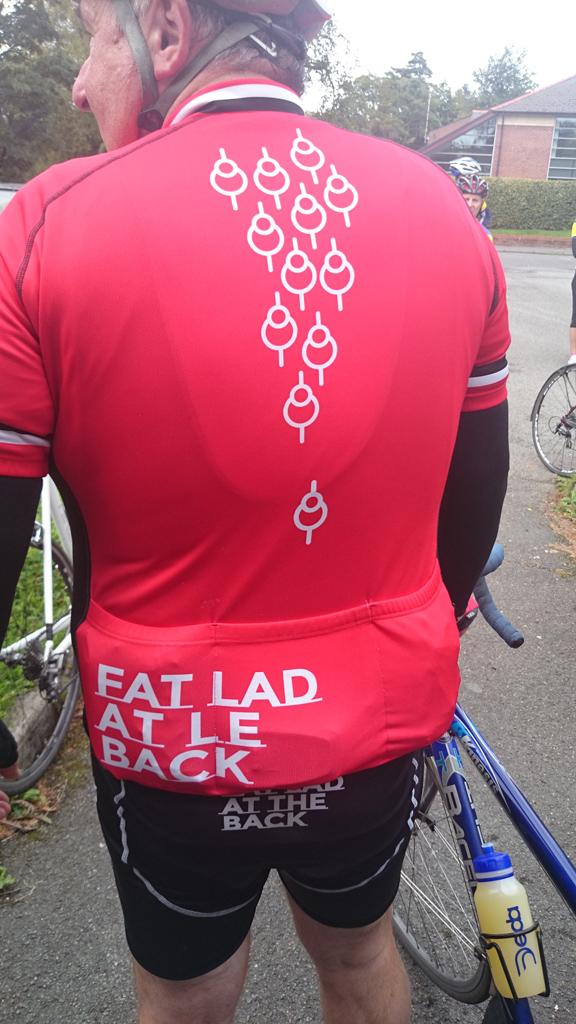 We set off at a calorie burning steady pace, heading via the usual lanes, with our destination to be Dodleston.

Bruce thought he had a flat tyre, and a slow puncture showed him that he did, so we stopped at Cross Lanes (Oscroft) whilst the inner tube was changed, and we had a breather. Jim didn’t have a breather as he volunteered to pump up the tyre and made a big job out of a little ‘un. Meanwhile Syd was musing about other clubs to Derek, and genuinely asked ‘Crewe Clarion, they’re from Warrington aren’t they?’ Yes Syd, stop taking those tablets. Now.

Derek was more concerned by his seatpost, which had developed a mind of it’s own to turn his saddle in all directions apart from facing forward. Nothing could be done, so Derek sent most of the ride out of the saddle, sprinting up hills for the rest of the day like a well-trained professional.

Soon on our way we enjoyed the warm sunshine and a very pleasant meander to the Chester Lakes at Dodleston, where we feasted royally on the usual, and Al refrained from cake (for around 10 minutes, till he saw mine, then ran back in to get one).

It was such a nice day that Al and Derek led us through some familiar lanes (Ron Sant ride deja vu) through Holt and back towards Tattenhall.

As we turned down Newton Lane, Al suddenly had a moment, and took off for the cafe sprint (forgetting that we’d already been to the cafe). It was all for nought, as Syd surged forward to claim the unofficial cafe/not cafe sprint, leaving Al a poor idle, lazy, beach bum second… 🙂

About 10 miles before Whitegate, Steve started the sprint, but changed his mind and waited. At the bottom of the hill though, the race was on again, with Wood, Spanish Ged and Steve gunning it. Wood was dropped, Ged pushed on with Steve on his wheel, and then, in a move that he doesn’t usually make, Steve attacked Ged for the sprint win (‘mugged’ as Ged described it)! There is no stopping the 2014 Guardian Cup Winner.

Thus ended a really nice day out. The loop from the Legion must’ve been about 60 miles (roughly calculated from the 84.75 miles on my Garmin by the time I got home), so some excellent mileage on a really nice day. Well done Al, there’s a few pounds off already…!!

*The Dragon’s Den reference is from last week’s programme, when the company that makes ‘Fat Lad at the Back’ apparel, didn’t secure an investment for a percentage of their business.