The 4am alarm rang this morning and I think Sam and I were too nervous about falling asleep to even consider a snooze, so up we got, dragged ourselves into some clothes, made some coffee and got on the road; leaving the poor dog mystified as to what the hell was going on. The last time I had seen such an hour was the flight to Majorca in April, however this time the early upheaval was to head to the SCCA 100TT near Prees and Market Drayton on the D100/2A course. 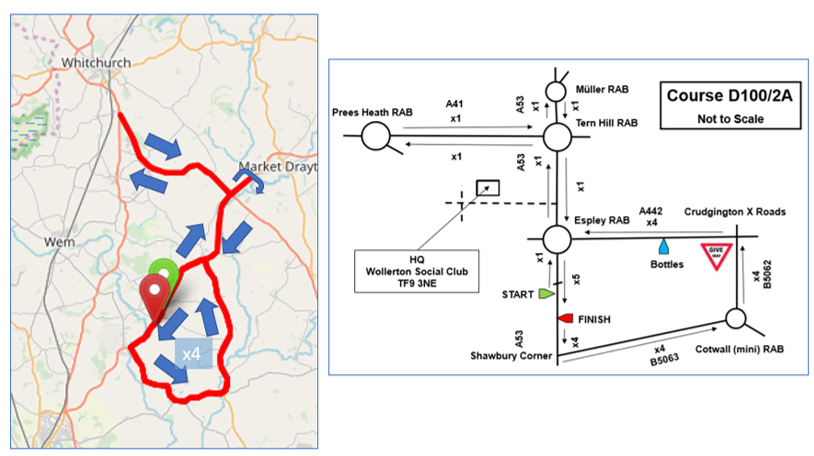 This was a first 100 for Sam, Titch (Paul Longley) and myself; with only Alistair Stanway holding any experience of the four of us riding. With this in mind, Dave Fearon had spent the week sending us all some very long emails containing a wealth of advice about how to ride, how to drink and how to eat, as well as a schedule for Titch and myself based on recent results. The schedules put Titch on a 4hr 25min target (22.64mph av.), and me on 4hr 26mins (22.56mph), starting slightly more quickly and coming down in average speed by the end of the 100 miles. At that speed, I would be set to beat the 100TT club record of 04:28:03 set by Jackie White in 1987. Sam’s plan was to do 25mph and see what came of it.

Dave was my feeder for the day, so we planned various hourly drops of bottles and food and a wet sponge if needed. I must get in an early, and huge thanks to Dave, Caroline and Jim Williams. All three were at the HQ before 6am with us this morning, with cars full of spares so they could help us out on course. We’re all so grateful for their time and giving up a day to help us out. I don’t think a fish and chip tea on Wednesday night to talk TTs quite covers it.

Off we gradually set from the HQ, Ali was rider number 10, Titch 43, I 47 and Sam 61. It was freezing heading out which was no surprise at that time of day, and the 5 miles to the start was a sufficient warm up.

My Dave schedule put me on to do a 25:40 first ten, and getting going onto the rolling roads which start the course I could tell within a few miles that wasn’t going to happen. However, I didn’t let it worry me, didn’t try to go hard to make it up, and instead just took the route as it came, trying to keep to a 230w average which I figured I could hold. I really wanted the club record, but was happy to let it go if I wasn’t on for it. This meant from 4 miles in I was diligently ignoring the timing schedule I’d very carefully stuck to my top tube.

The roads to Prees continued to roll, and it was a relief to hit the roundabout for a 180 to head back to Tern Hill, then left on the short stretch to the Muller roundabout. It was on this stretch I received my first bottle from Dave, chucking my empty one close to him and grabbing another whilst rolling through on the bike – this was the first time I’d ever done this so to grab the first without complication was a relief. After another 180 at Muller, it was a case of heading South and onto 4 laps of a circuit, which was great as I made up a lot of my average on the fast road down to the first left turn, hitting it on 22.8mph.

After this point the circuit was just a case of making up time on the faster parts, then losing a bit on the rolling ups, especially on the kicker to the mini roundabout at Cotwall.  I found that keeping a rhythm at 230 watts was working for me, and that by webbing my hands in front of my extensions I could relax my shoulders more and stay relatively ‘comfortable’. I continued to eat and drink regularly, grabbing bottles from Dave on the hour (only missing one!) and alternating what I had so that I was adding in some caffeine as well as some food not made in a laboratory.

At exactly 60 miles in, I was caught by a flying Sam, who looked fantastic as he came past yelling “GO ON BABE!” I was also overtaken by every rider on a 0 number who could reasonably have caught me, plus a few 5s who were a lap ahead. That said it was also nice to catch a few myself and try to say something encouraging as I passed.

I found as the time ticked on that I just never really slowed down. The 230 watts was really working for me, as I could feel that my legs were working hard and would have weakened a lot had I pressed much more, but that I could hold it and keep going. I could just about hear Dave a few times as I passed and he was saying the same sort of thing too. Into the final ten miles I felt tired but pretty solid, so started to empty it out a bit, chucking a half drunk bottle to Dave and ignoring his sponge offer so I could hammer out the last 6 or so miles. It turned out that that last 10 was my fastest of all splits, and I piled down the final bit and past the finish to a waiting Sam, who made sure I continued properly to the ‘road crossing man’ so that I wasn’t DQ’d. (The ‘road crossing man’ did have his uses though, as he was parked up in a motorhome and didn’t seem to mind me legging it in to use the worlds smallest toilet for a wee, where I immediately leg cramped and got a bit stuck because such things are not designed for 6 foot post-TT women!)

So there we have it! The guys didn’t say too much more about their rides other than that it flipping hurt, and that they’d found the same bits of the course (including a 1 mile stretch where it was always spitting) slower. After the longest feeling 6 mile hike we got back to the HQ for our official results (and I don’t think any of us were disappointed…)

Titch – 04:25:11, club bronze, bang on schedule and most importantly 1st in category C (for those who are fairly new to TTs.) A great time for any person, but that just tops it off. Well done again Titch!!

Emily – 04:27:53. I beat Jackie’s club record by a slim 9 seconds and was the fastest lady overall. I’m so so pleased with today I can’t quite believe it. I was always aiming to be the record holder, but it’s easy saying that when the 100 miles are still in front of you.

The fastest men overall were:

Overall results are below! I hope everyone’s having an easy night tonight. Sam’s already asleep on the sofa so I’m switching the telly over from the cricket to Wimbledon… 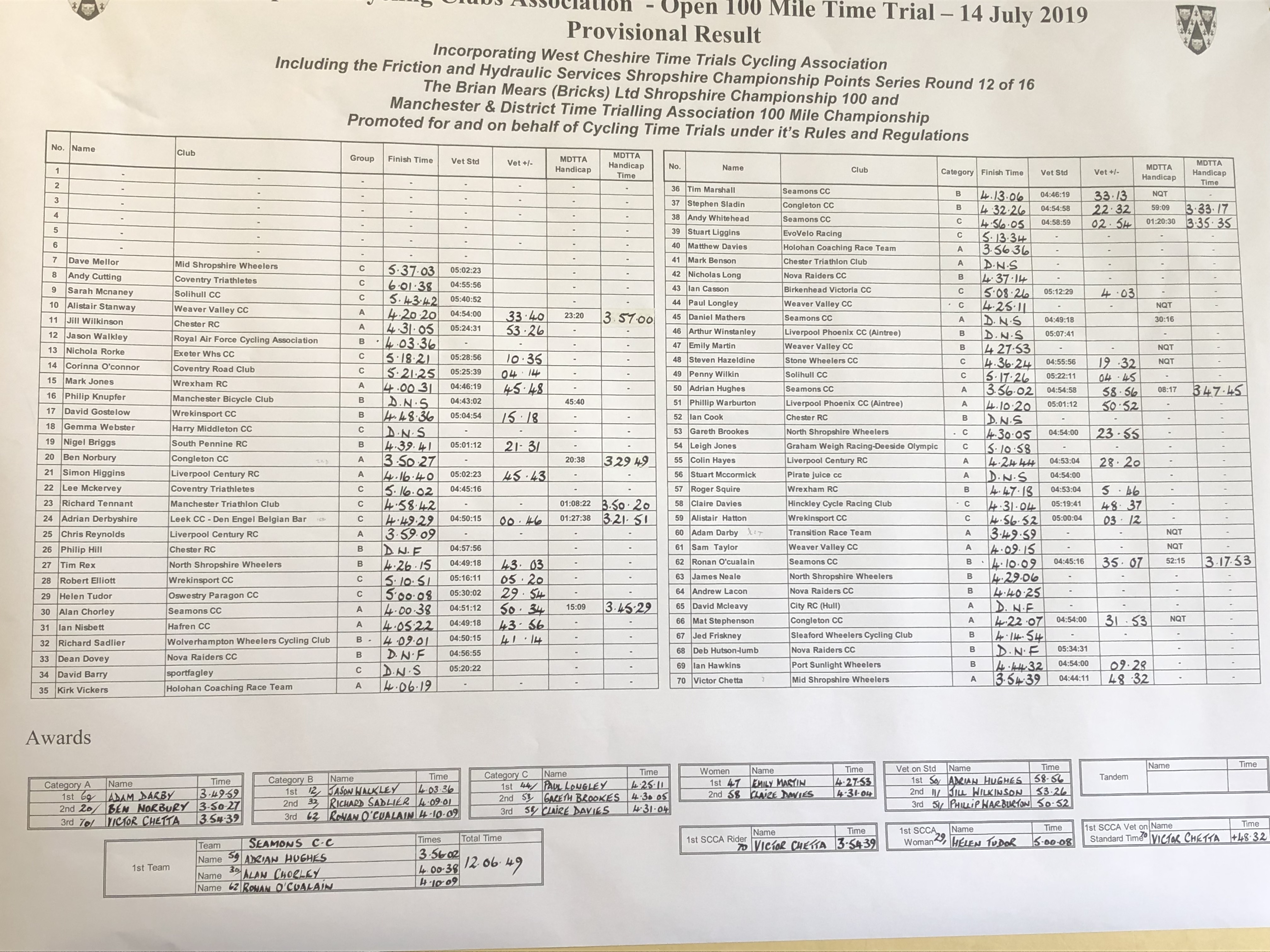