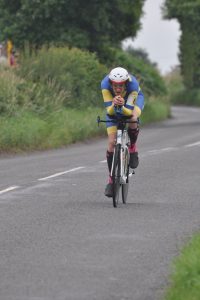 Just some words from me following Emily’s excellent blog yesterday.  It has been a quite a few years since we had 4 entrants in the 100 champs and having 3 novices including one lady entrant is even more unusual.  All 4 riders stepped up to the distance and took it on bravely.  100 miles at a race pace is difficult, not just physically but mentally as total concentration is required for over 4 hours.  Add in the sporting nature of the classic Anfield 100 course which is mostly on single carriageway lanes and it takes guts and determination to do a ride.

Sam Taylor – New club champion with a debut ride at the distance, recording 4:09:15 which gave him 13th overall on the day.  Sam started like a train and faded but didn’t blow completely over the last 10 miles or so.  A very brave ride with an impressive result for a distance novice.  He already has the power and has demonstrated his short distance top end speed so a few more miles in the legs and I’m sure that Sam will produce a massive ride in the future at this distance as it clearly suits him.

Alistair Stanway – Al has an excellent track record at 100 miles with a sub 4 hour PB.  Today he put in a solid ride and recorded 4:20:20 giving him silver medal in the club champs.

Paul Longley – Titch started at a solid pace recording a 24 minute first 10 as per his schedule.  He had problems with cramping feet (shoes too tight) but persevered and stuck with the schedule.  He was totally spent at the finish but stopped the clock at 4:25:11.  His schedule was 4:25:00 so amazing discipline and focus there Titch, a great ride and a well deserved bronze in the champs!  Titch also won the Group C prize in the event.

What can I say about Emily…. superstar!!  She decided to ride below the early brisk pace that I scheduled for her, confident that she could hold her power for the duration of the race.  This is risky as “getting time in the bank” early on is like insurance for the fading that most experience later on as fatigue sets in.  It is rare that somebody can hold a grippy pace for several hours without fading and then up their game towards the end of a 100 but that is exactly what Emily did, setting her best 10 mile effort between 90 & 100 miles!  Her 4:27:53  beat the 32 year old club record set by Jackie White on an extremely quick Dual Carriageway course in 1987, by just 10 seconds.  Emily was fastest lady in the event with Claire Davies of Hinkley CRC 2nd with 4:31:04  & top distance rider Jill Wilkinson 3rd with 4:31:05.   Emily ironically didn’t win a medal in the WVCC club champs but she showed her class today and easily won the Ladies race and took the Manchester & District TTA ladies 100 mile trophy as this event was also the M&DTTA championship.