I have a heavy week this coming week and so opted to not go on the hilly Saturday ride and headed straight for Hatchmere instead. From what I heard there were no takers at the club for the hilly ride anyway today. Llanberis must be in the air as by the time we set off, at least 20 riders had assembled at the cross roads plus we picked up Matt Ellis in Ashton. It was a pretty warm day but with rain threatening the whole time. We were riding in to a brisk headwind but dealing with this was not too difficult as we were doing 5 to 10 minute turns on the front. With so many people you only needed to be on the front every couple of hours if you wanted so the living was easy. Although it wasn’t summertime. As it is still not summertime it is perhaps worth pointing out the lack of adequate flappage visible on certain bikes. This leads to occasional scrabbling for the ‘best’ wheel to follow. Best in this case being the one that leaves you cleanest.

The ride kept together nicely and at a decent pace on the Bangor on Dee loop. At some point Matt Nowell peeled off having just wanted to stretch his legs for tomorrow’s race. When we got back to Holt, Steve and Paddy and 1 other (?) called it a day and went to Cleopatra’s. The rest of us were organised by Alan into a little through and off formation. This worked well for some miles although a few riders haven’t got the knack of easing off as they come through to the front which means the pace inevitably picks up. I would heartily recommend people watch and learn from more experienced riders, Alan being a fantastic example, he rides smoothly, always in the right place, is aware of the wind direction, I could go on. Anyway, watch and learn, it makes life so much easier.

Along the river a few took a direct route down the main road to 2 Mills. The headwind here, as is often the case, was pretty hard and there was a split in the group. Phil (bike, clothes and skin fixed from last week) jumped off the front, Chris G went over to him and I then pulled a few riders over to make a small group of a half a dozen or so. We worked well together all along the river, fighting in to the gale.

There was a re-grouping at Deeside and we wended our way to the always excellent Eureka . 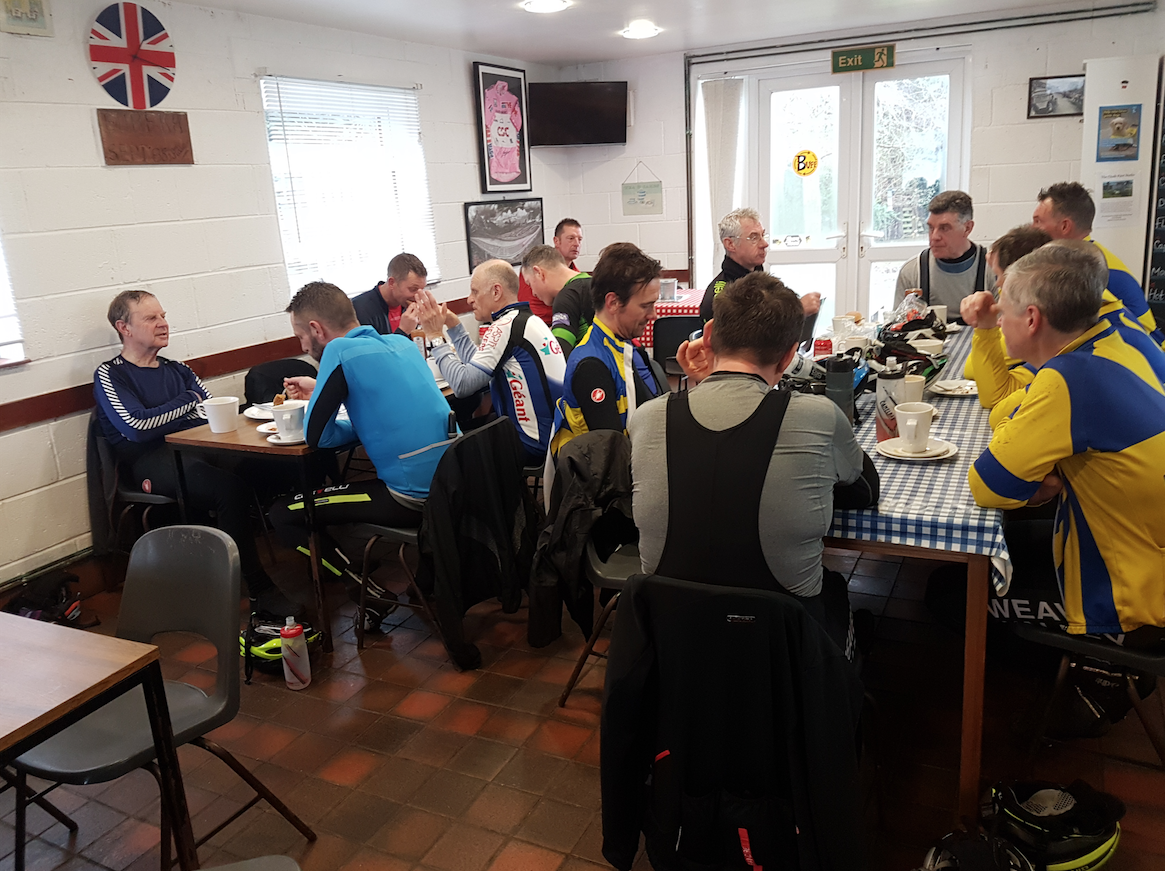 Assorted delicious stomach filling comestibles consumed we set off although not before Sean (?) did a swift repair to his rear mudguard. The homeward journey was mostly wind assisted and Cheshire Oaks and the winding lanes to Mickle Trafford were swiftly despatched with a little bit of re-grouping at junctions. A puncture (not me this time thankfully) coming out of Mickle Trafford broke our rhythm for 10 minutes but we soon found it again with the wind helping a good deal. Things as usual got quiet on the run up to the forest with people variously planning strategies, praying and voicing reasons why they wouldn’t be fighting it out today (e.g. ‘My wife says i shouldn’t get a sweat on..’). As it was, Sean  put in a little dig on the Delamere Ventoux, Alan and I went with him and we got a gap. We let Sean drag us all through the forest until nearing the sign where we decided on the gentlemanly thing a la Hinault and Lemond on Alpe d’Huez in ’86 and crossed the line as one.

By this point various people had gone their own way home and we were a much depleted group returning to Northwich. Saying goodbye to the final few at the lights by the Grange i elected to put some extra miles in so did a little loop out towards Lower Whitley before returning home to a welcome pint of milk and a Mars bar. 103 miles covered. A satisfied glow. A great day out, thank you everyone.

Road Runs
The Wild Wales Challenge 2017
The Curse of The Nova 2up!