Return to the Howgills

We’d postponed this ride from September so a few of our fat tyre’d brethren could join us to revisit a popular ride from some years ago. In the end there was only Eleanor who had done this route before, with Tim, Iain, Jim and myself completing the gang.

The usual start time of 10am suffered the usual slippage back to about twenty past once we’d had a brew, and after briefly annoying a grumpy local OAP for blocking the pavement, (who then immediately crossed the road, avoiding the pavement altogether!) we were off up a side street towards a farm where we encountered another warm Cumbrian welcome from a farmer for mistakenly riding 50 meters on a footpath. This slight navigational confusion largely continued for the rest of the day, due to me giving Jim a different version of the route to upload onto his GPS doodah from the one I had mapped.

Almost immediately exiting the farm we started the Pushing Game, which everyone thoroughly enjoyed, including Iain and Tim, who usually won’t play. 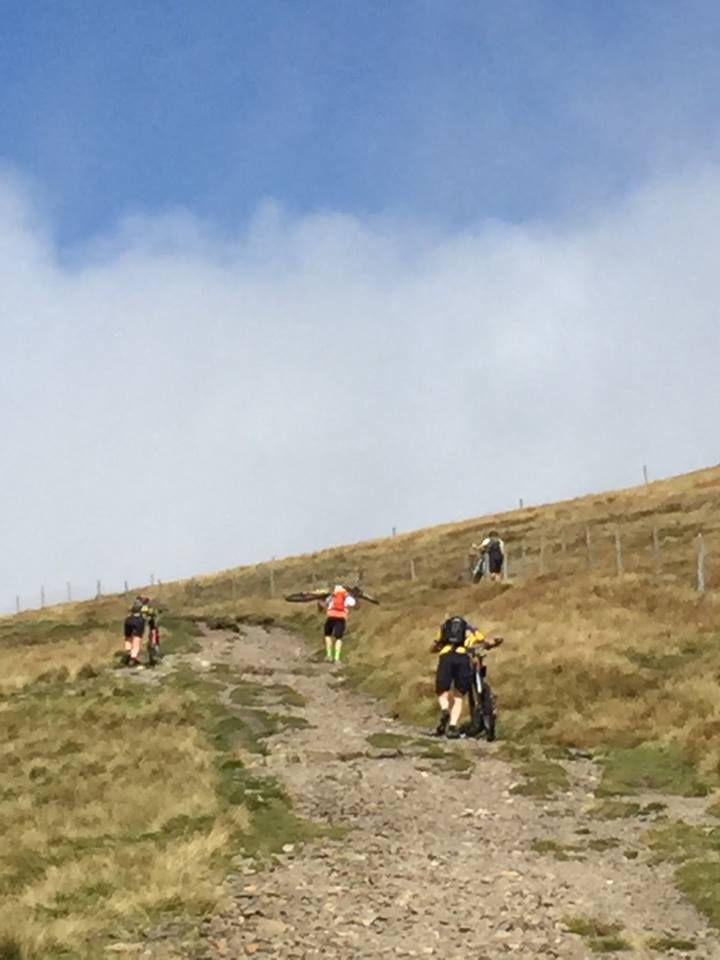 It didn’t last too long though, 4 miles and 1750 feet of climbing later we reached a trig point on the Calf, the high point of the day.

I can see the pub from here, (but we’re going to get a bit lost on the way)

After a brief pause at the top to  we started on one of the most exceptionally beautiful trails I’ve ever ridden down. Following the line of the Bowerdale Beck, we descended for about 5 miles down a lush green valley, our only company being sheep and a small herd of black wild ponies. The trail itself, probably made by our ovine companions and their shepherds was narrow and rocky with a lot of small gullies just right to grab a wheel and cause a spill and tributaries to the beck to making for a fun ride all the way to the line of the A66 via a mercurial pro-montary, (ask Eleanor – each one of us came home with a significantly enriched vocabulary). Thankfully we suffered no major spills or crashes, but at least one wet foot each from some deep and permanent looking puddles. 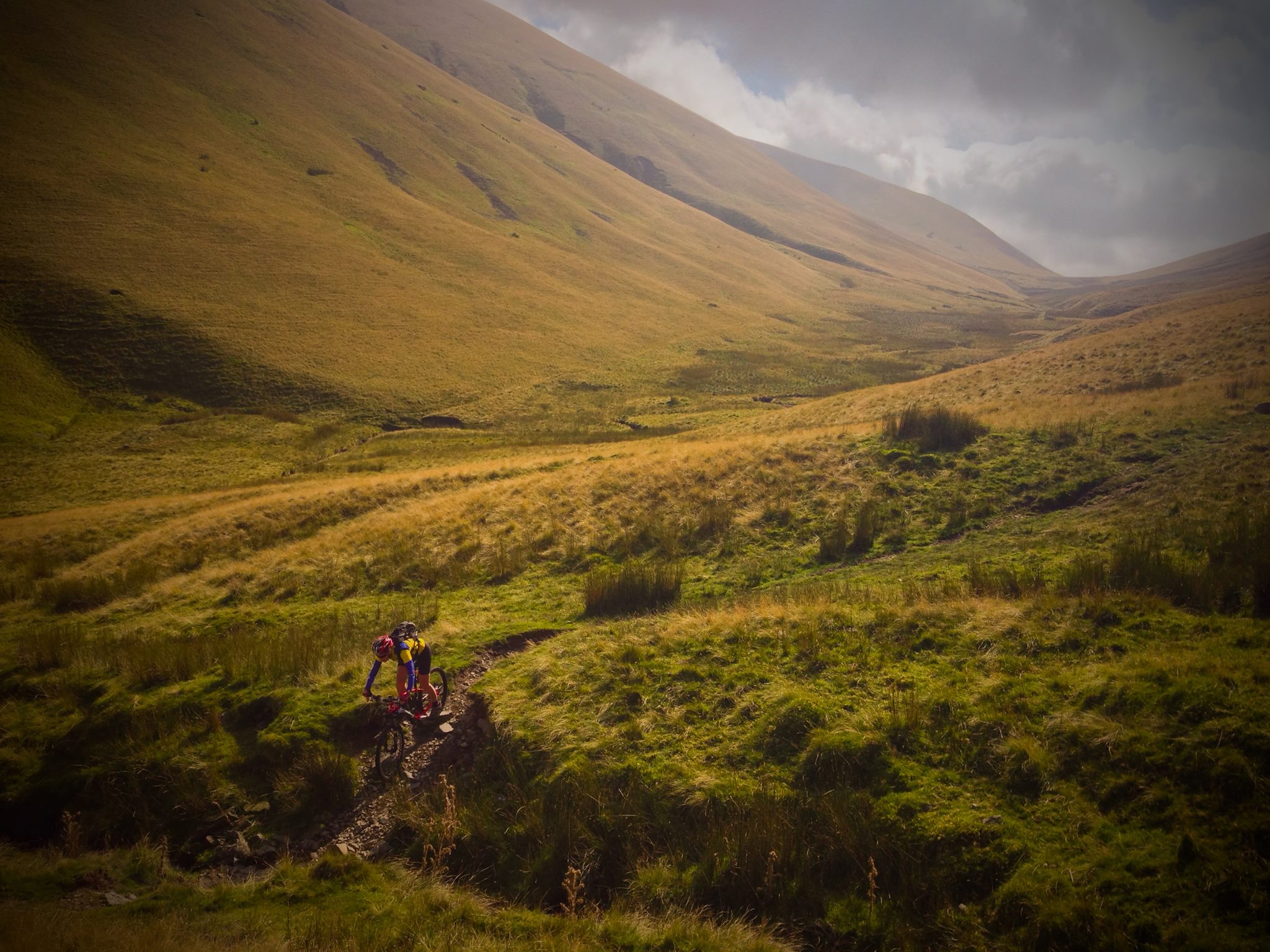 Bowerdale. We came from right up there ->

Owing to another slight disagreement between the SatNav and the MattNav, we arrived at the King’s Head in Ravenstonedale a little behind schedule but thankfully while they were still serving food, including contenders for the Guinness Book chunkiest chips in the world record. From here we followed a tracks and trails back south towards Sedbergh, a little different in flavour to the morning offerings, as woods and farmland gave more scope than the mornings rocks for speed and finesse, albeit broken up by a couple of river fords to cross and a round of tag-team gate opening reminiscent of a ride in rural North Wales. 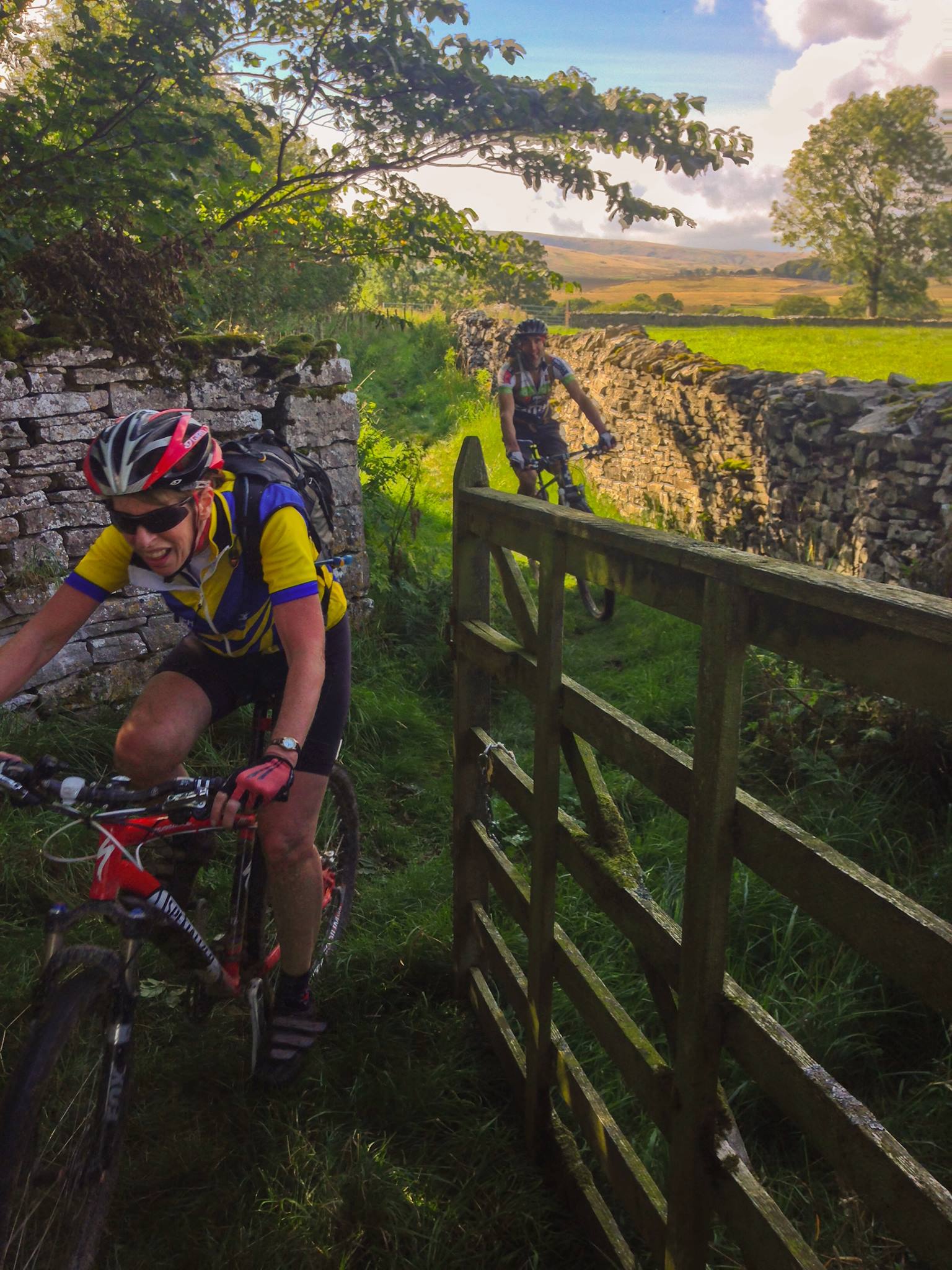 And that was about that. After a quick blast down the road, which Jim seemed to enjoy greatly, back in his element we had time for a quick drink in middle of town, taking full advantage of the stupendously lucky weather before travelling back down the M6.

Where to next time then? I’m not sure, as this will be a difficult trip to beat.

Most photo credits for this one go to Iain, the inventor of HDR and the Apple iPhone.