Non competitive cycling, an alien concept for some…

Well what a fantastic turnout for the Northwich Pedal Power festival, with a few hundred riders setting off on various length rides this morning. I ended up with a large group on the 70 mile ride, which followed a beautiful circuitous route which criss-crossed betweeen Middlewich, Winsford and Delamere.
Jim Williams is an amazing front rider – setting a fastish but steady pace for us all, which meant inevitably we passed a lot of other sportive riders en route. I think a few tagged on to our bunch, and occasionally someone would get frustrated sitting on our wheels and tried to come past our little peloton. It was allegedly a non competitive event but would we let them go? Oh no we wouldn’t, with Jim just upping the pace very slightly….
Jim is a ruthless sort and wouldn’t let us stop for the proferred bacon sandwich after 10 miles, at Middlewich – you can see his point, he’s an Audax rider and they don’t stop even after 400 miles – and it even took some persuasion to get him to allow us to stop at the 45 mile point in Winsford for refreshments and a comfort break. Having wolfed down our sausage sandwiches (Steve didn’t even have time for that) we set off again (although with diminishing numbers: I think some riders must have been in the food queue when we set off, but those of the Audax persuasion don’t hang about, so apologies to them). We rode swiftly through Winsford, Whitegate, up the hill to Norley, Hatchmere, and then up Dark Ark Lane with tired legs..then over several lumpy bits to the junction above Kingsley, where the faster of our riders considerately waited for those of us for whom the said lumps had proved a bit challenging.
And then downhill all the way home, with a tall bloke on a Giant bike taking us all on after Acton Bridge station, which led to a red mist (strictly non competitive of course) sprint across the road junction at Weaverham – where according to Woody, someone behind us fell off, (hope he’s OK) and Woody sensibly persuaded us to cool it a bit on the run in home and we sailed happily into the Town Centre to be greeted like conquering heroes by the young boy who was ringing a loud bell at the finish line, which made me at least, feel rather proud. Then goody bags and a visit to the WVCC stand where Jules, Elaine, Graham and Ady were doing a fab job promoting the club. Ady persuaded me to have a go on the Watt bike which I can tell you is not a good idea after 70 miles of keeping up with JIm and team, and so it proved, as I now have the unique record of being the only person ever to record a negative power output.
Thanks to my fellow riders for their company, there are too many to name so I’ll just name-check those with me at the end, that is Jim, Steve M, Stuart, Woody, Spanish Ged with the tanned legs, Alex, and Matthew – oh and a rider called Nigel who joined our gang, he isn’t in the club but with a bit of encouragement might sign up. Steve’s Garmin said we’d done 70.7 miles at 17.7mph which was a good bit of exercise. 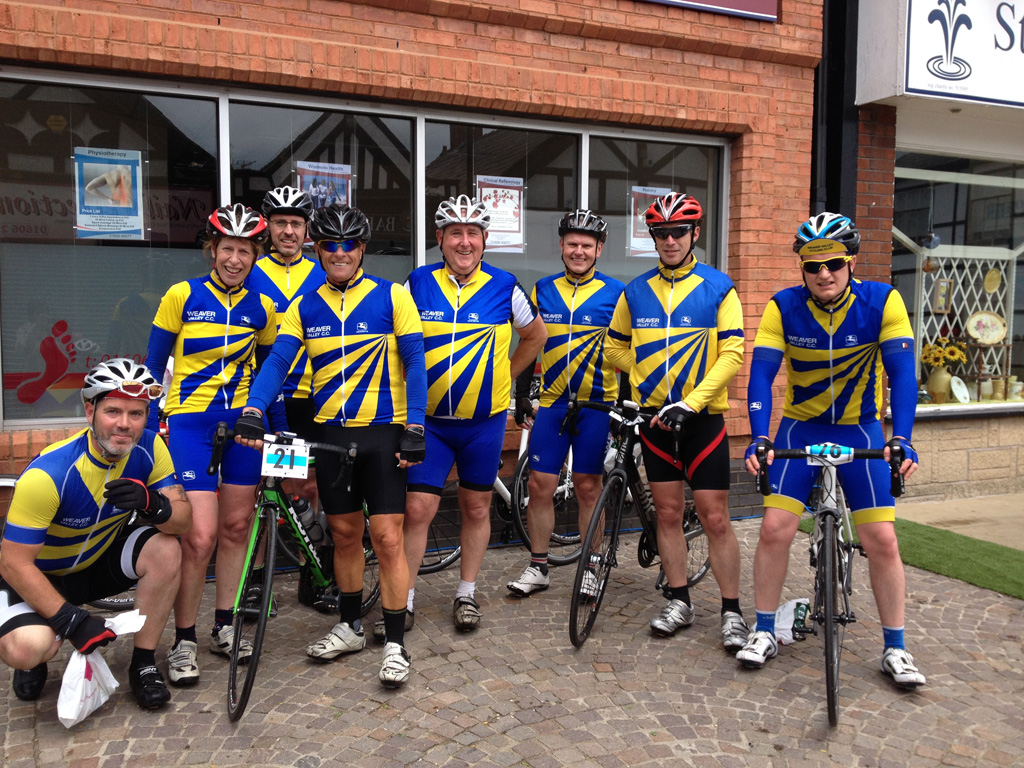