All things considered (Llanberis panic training), it was a fairly small contingent at the Rugby Club on Sunday morning. The weather was really mild compared to recent weeks so it was set to be a nice clear day on the bike for all, with just a bit of wind to contend with.

Having ridden 85 miles on the training ride the day before, which was considerably further and faster than I’d done in months, my legs were tight and tired – so I’d arrived with all intentions set on a short run. However, after Kempy and Kevan guaranteed the run would be steady, and a fair bit of persuasion from Carol (sporty spice) and Eleanor (posh spice) for more long run girl power (we all know which spice girl I am), I caved and agreed, whilst the short run were to head to Chester.

So off we went, Paul, Kevan, Rob, Eleanor, Carol, Steve Malkin (who had also been talked round), Mark, Alan, Stuart, anyone I have undoubtedly forgotten and myself, turning right out of the club and up the hill to Weaverham, where I started the day’s theme of being last up the climb. Out through Weaverham, Norley Lane and Delamere, a fairly brisk but steady pace was set; then after the left hand turn at Tarvin, Kevan made a wise call that with there being a roughly even split between those wanting (or needing!) a steady ride out, and those wanting a quicker ride to the café, that we split into two – to be known as the fast long ride & the steady long ride. So off the fast long ride sped, only to immediately miss the turn onto Cross Lanes, so we were back together again for a few minutes until the group re-gathered themselves for fast long run attempt two and headed to Chester.

Now, with my morning’s plan being to ride the short run, I had only brought a banana with me for sugar supplies as a). I shouldn’t need more to get to Chester and b). I’m on a diet in readiness for Bridesmaid duties at my brother’s wedding, as the other bridesmaids all have six packs and don’t seem to struggle to say no to cheese and crisps (which is ironic really, as none of them ever wear a skinsuit for fun). Anyway, with the change of plan to try to make it to Loggerheads without crying, I was going to need sugar! So, the steady long ride kindly stopped at an Esso in Handbridge so I could buy another energy drink, a flapjack, a packet of Smartie mini eggs and three bags of sweets – all of which you’d agree, are weightloss friendly items. I also managed to call my mum to sort the dog out as it didn’t look like we’d be home for half past two.

So, with my face full of gummy bears we headed out to Lower Kinnerton, up the hill and left onto the A5104, at which point Eleanor’s rear tyre gave up the ghost and blew with such force Carol felt the air smack her in the leg. Unfortunately, as you can see from the photo, Eleanor’s tyre was not for fixing, so Eleanor and Kevan patched it up as best they could and headed back to Chester to buy some tyres and have lunch by the river. 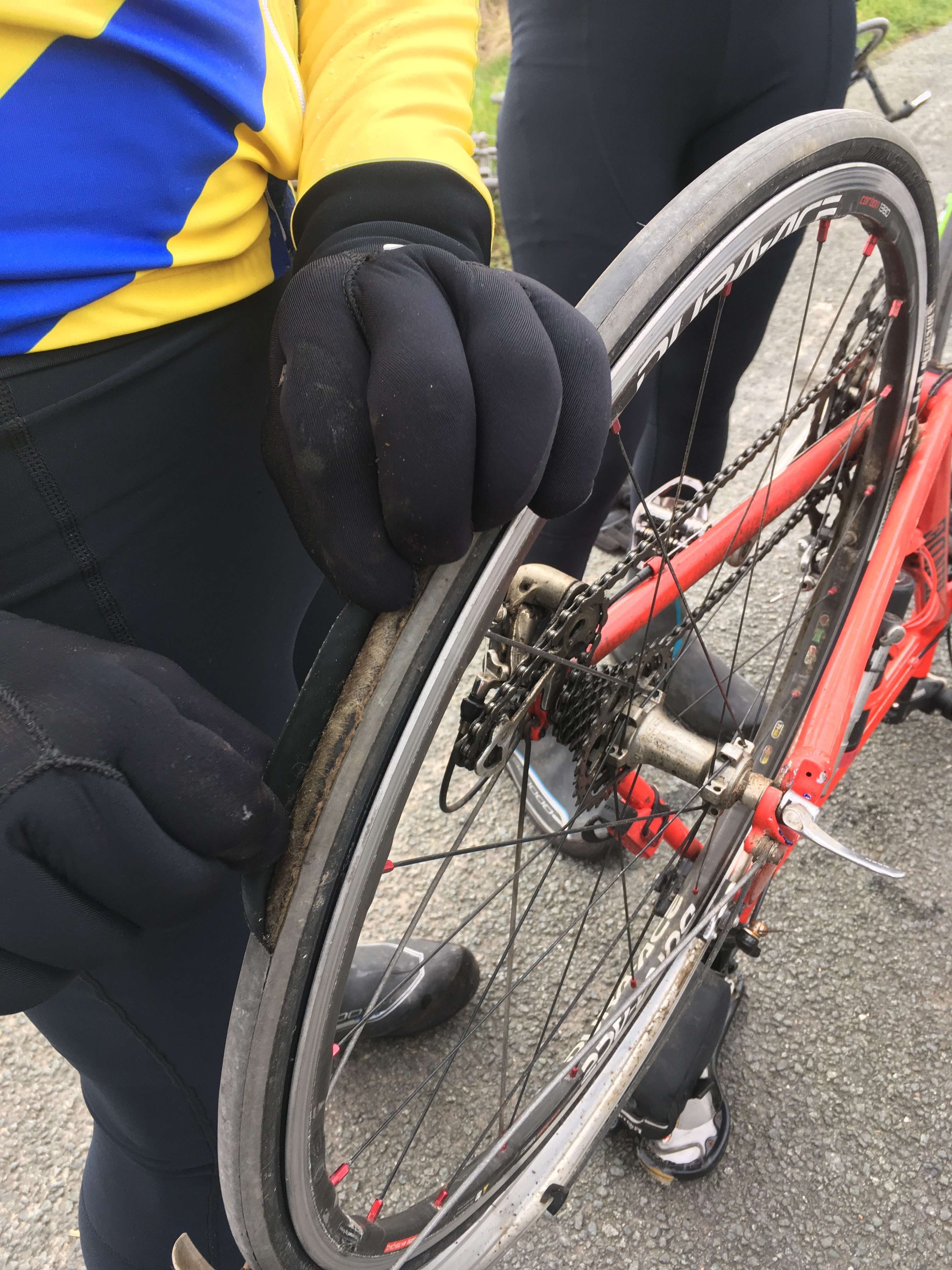 A patch kit couldn’t quite cut it

At the loss of Kevan and Eleanor, a deeply saddened but full group were back together as the fast ride had taken a different route to Kinnerton. We all continued to head up the hill and the long climb from Penyfford to Treuddyn, where Carol and Steve were very kind and held themselves back so that I could keep a wheel up the hill, whilst also trying to find Smartie eggs in my pockets with thick gloves on.

Out to the bypass and it was a speedy run into a busy Loggerheads café, where beans and tea were ordered and I opted for healthy soup with some thin slices of brown bread… 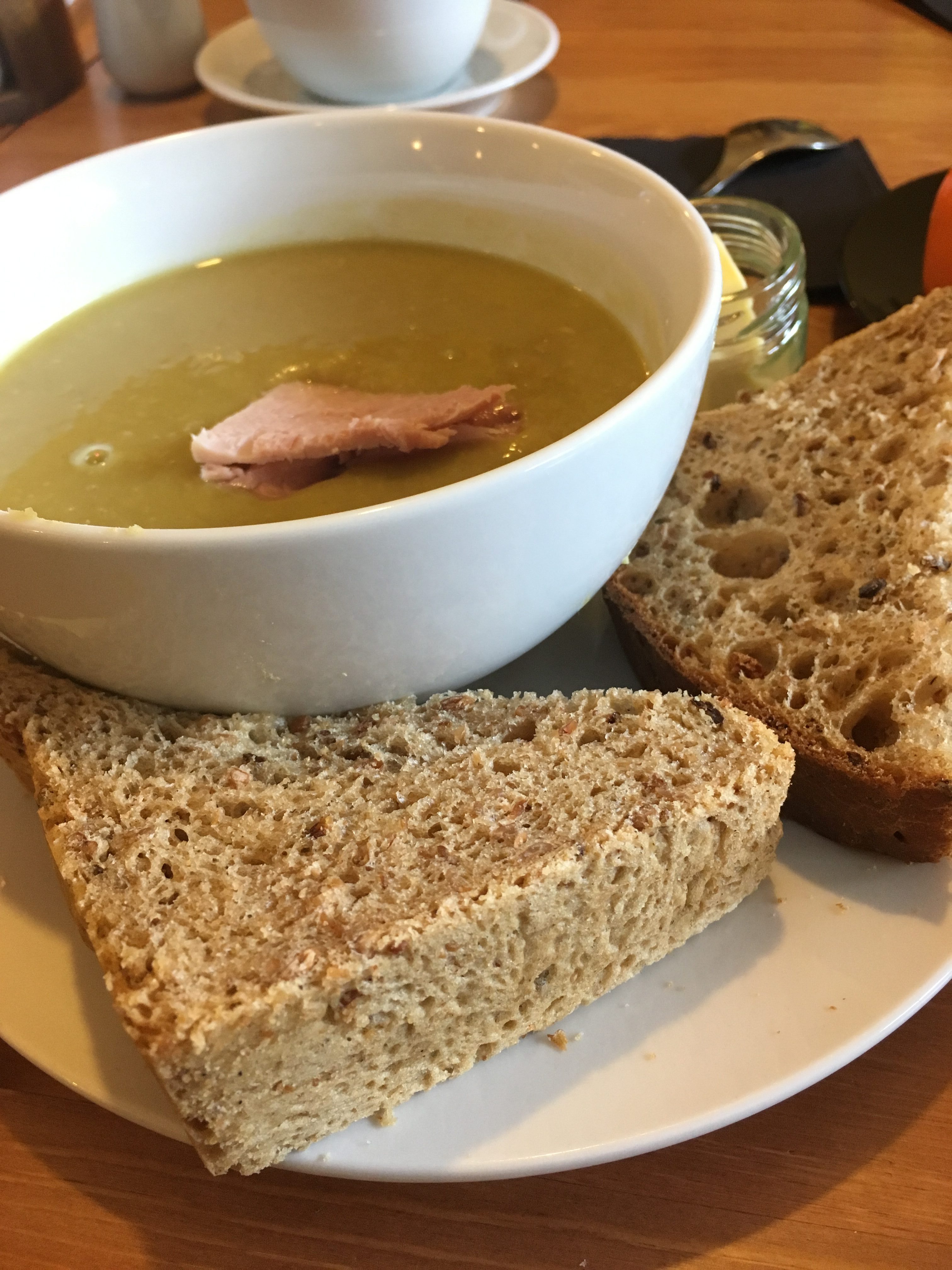 Can of coke out of shot…

Back onto the bicycles and it was a fairly brisk, direct route home down the A5118 with everyone together and led by Stuart (who according to fast long ride reports, drank petrol for breakfast) where we then retraced our route from Kinnerton. Back home through Delamere again, however due to flailing at the back eating cola bottles I cannot report on if there was a race for the sign, nor who won it – but I’ll guess that it was Stuart, so well done Stu!

After that everyone began to split off to head home. I’ll assume everyone else got in, ate 3 Babybells, got in the shower, and then spent the whole night on the sofa after ordering a Chinese.

Thanks for a fab day out folks! And for the many a drag I received whenever the road pointed skyward.