Jim, Geoff, Stuart, Christine, Mark, Kevin and me were at the gates this morning at 9.30. Destination, the No Car Cafe. I haven’t actually established whether, if you were to turn up in a car, you would be refused. Anyway, it’s a great place. This was a ride we did the week before Wild Wales last year and well worth repeating; lots of fast flat, steep up, steep down, drag up, drag down. Something for everyone.

We picked up Iain at the Grange and then Phil at Davenham and the nine of us proceeded on our merry way. Regular readers of this nonsense may remember that last week my front wheel disappeared down an enormous pothole. Well, as luck would have it, exactly the same pothole did exactly the same thing to me this week. Third in line and obviously aware of the pothole, the really stupid thing was that I swerved to miss it and swerved straight in to it, drawn in to it’s inky blackholeness. They don’t call me the next Sagan for nothing. Oh no, that’s someone else. More of him later.

Puncture fixed, thanks Jim for waiting. Thanks everyone else for waiting at the 3 Greyhounds getting an early drink in. I don’t mind really, just painting pictures with words. Outside Goostrey, Stuart flatted and, Captain Oates-like, he suggested we leave him as he, ‘may be some time’. After a small amount of protestation we did. 8 little indians left.

We nearly went through Swettenham, Congleton and Gawsworth but missed them all before arriving at Broken Cross where, the pull of the west being too much, Kevin peeled off to head for more familiar pastures. Just the magnificent 7 now.

We skirted Macclesfield, then through Prestbury and Bollington before eventually reaching the day’s first objective, Blaze Hill. Geoff had dropped off the back at this point for a little machinery fettling but soon caught up as the road reached skywards. Always a good one to wake you up Blaze Hill, if you are cold at the bottom of it, which i don’t think any of us were today, then you certainly won’t be cold at the top. So Iain, Mark and Jim broke away and did their own thing, Geoff went past the rest of us and set off in pursuit and we all eventually reached the summit. I spent the whole climb thinking i would have done much better with a lower gear. Got to blame it on something. Jim fettled with his rear brake at this point, it sounding like a poorly mouse was stuck in his hub. Mark and Christine turned right at the main road while we turned left and so we were now 5.

Down and up and down and up we went on the road past Kettleshulme and to Whaley Bridge. It was along here that we caught and passed Tom Pidcock (yes that one, our newest World Champion, awesome job) with a female member of the GB Team. I hasten to add they were on their bikes, not at a bus shelter or anything. Jim, Iain and I lead the fast descent in to Whaley Bridge, I would have gone faster but for a lack of a higher gear, again, got to blame it on…

The road from Whaley Bridge to Chapel en le Frith (meaning Chapel in the Forest) is a draggy affair and Jim was pleased to take the front and pull us along for many a mile and then up the lower slopes of Mam Tor (Mother Hill). My cadence was not quite comfortable, i needed to turn the pedals a touch quicker, so I crept to the front to be comfortable and was there for at least 3 tenths of a second before Iain had the bright idea of going twice the speed leaving us to jostle and scrabble for position. Eventually the 3 amigos got a gap leaving Phil and me to scramble up mother alone.

No sooner could I say, ‘good god, is that my heart-rate’, before we reached the safety of the cafe. 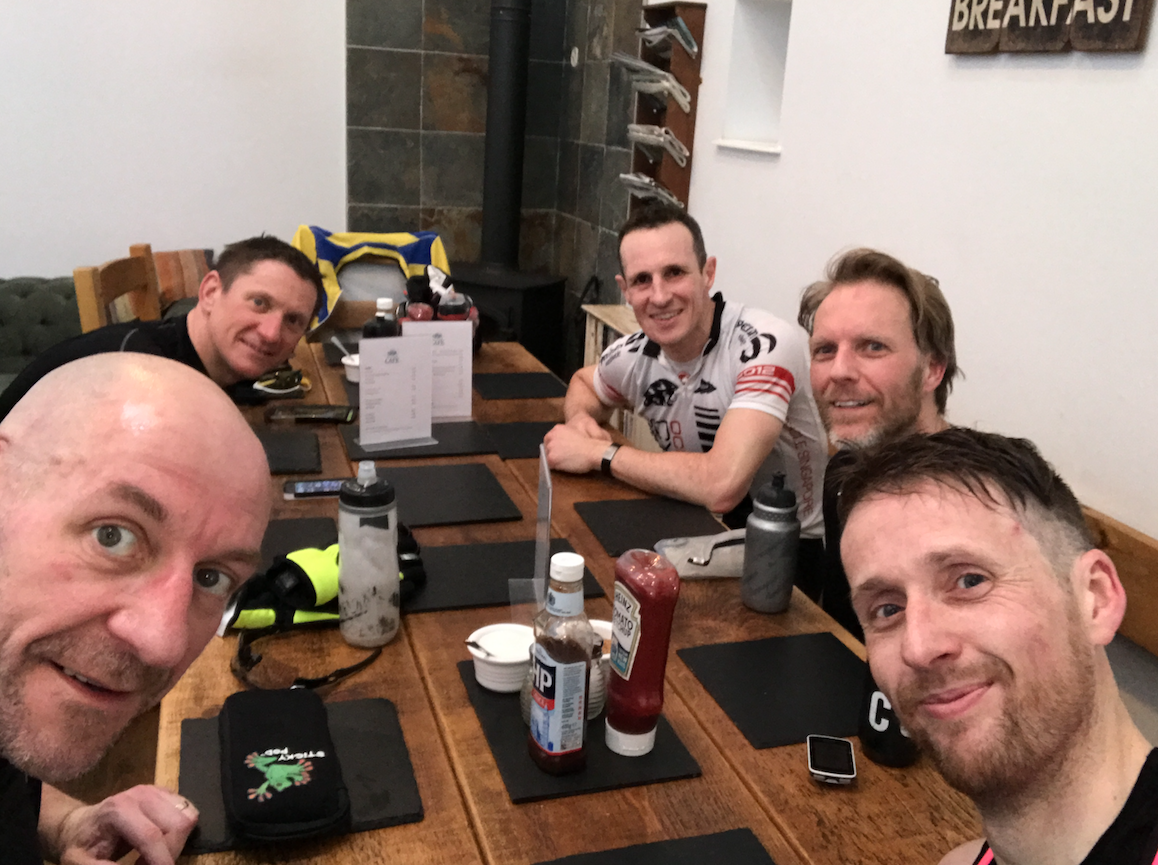 Beans, tea, coffee, coke ordered, Jim regaled us with a tale of a faulty bike shop, perhaps one to avoid. We also found out at this point the surprising news that Iain has a side-line in all-in wrestling and immediately after our ride he was off to a tournament. 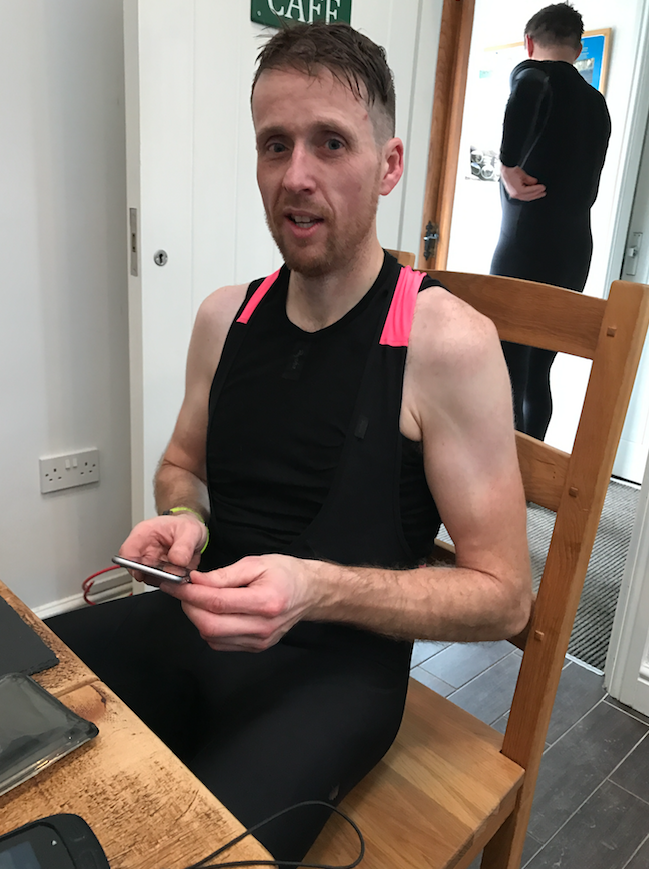 Anyway, the cafe is great, you should go, great local food, free top-ups, friendly service, good prices and strange beer if you are so inclined. 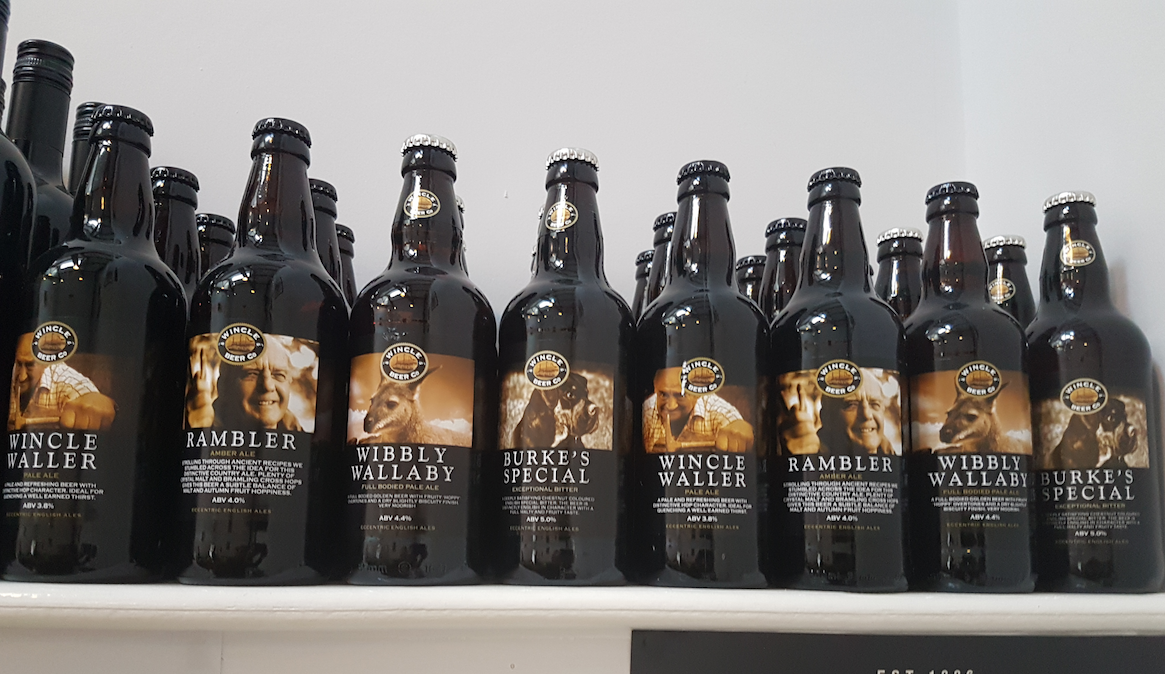 Leaving the cafe you get cafe legs to the power of ten. There aren’t many cafes that have such a drag right outside the front door. Still, this loosening and warming up was needed as very soon we headed back down Mam Tor, a nice long, fast descent.

After the climb back over to Whaley Bridge we turned left and very quickly encountered the delights of Long Hill. Aptly named if ever there was one. Phil’s legs were a bit shot by this point and he rode up at his own pace, i was doing OK until on a short downhill i allowed a small gap and got myself in the wind, from there i couldn’t get back on and the gap to the 3 amigos grew in a steady and sure way.

We regrouped at the top where the road turns right for the fast descent in to the Goyt Valley, turned left along the reservoir and up the nice hill out of the valley to Derbyshire Bridge. 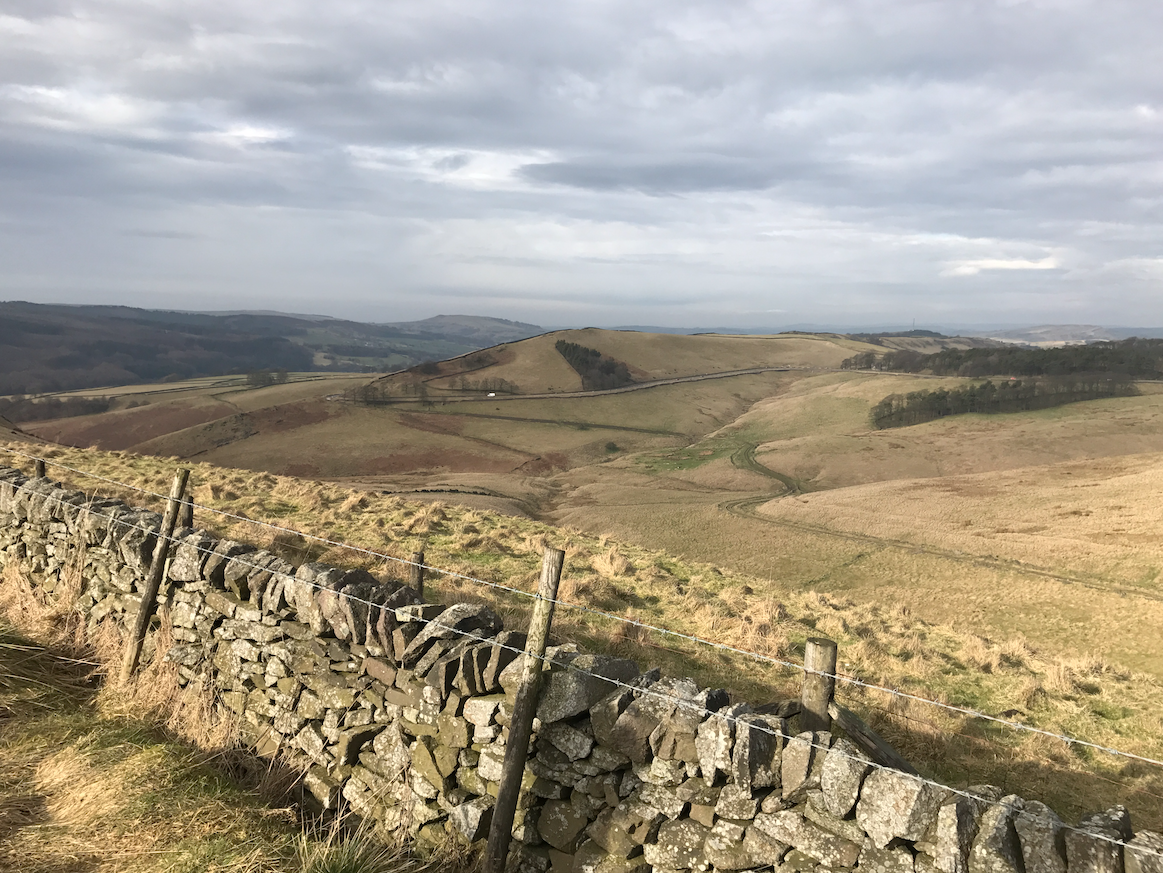 A free-for-all on the way down the ‘cat’ saw Iain and Geoff get a gap, me and Jim catch and pass Geoff, Jim drop me setting off in pursuit of  Iain, me after Jim and Geoff after me, with Phil at the rear, all like some human, cycling, Tom and Jerry chase. I felt and heard something amiss going down the cat and sure enough when we regrouped I found some rear mudguard stays had broken away and were now swinging about doing their own thing. Nothing could be done about this but enjoy the rattle.

Up through Macclesfield and down the road of the old (and much better) downhill course, Phil said to me that he was in bits. He didn’t realise how prescient his words were. With both hands loose on the top of the bars a small bump in the road was encountered, hands came off of bars, chest now on bars, front wheel waving wildly, it looked like he had saved it before succumbing to gravity and a very nasty and thorough fall. Aside from punching the tarmac, he had hurt his knee and came down heavily on a shoulder. In addition of course the bike had been badly scraped and every piece of clothing; overshoes, tights, gilet, jersey, gloves, all torn. Brake lever banged back in to place, chain back on, Phil got back on and off we went with Geoff doing a long fast turn on the front for about 12 miles through Siddington, Lower Withington and to Twemlow.

We went the usual way, back through Goostrey and to Allostock with Phil turning left at the 3 Greyhounds towards Middlewich and a long lie down I think.

Steadily back to Davenham and Hartford where Iain and Geoff peeled off leaving just me and Jim. I stayed with Jim through Weaverham to Acton Bridge to get some extra miles in before saying my goodbyes and meandering home down the quiet lanes.

An absolutely packed day, a long day with, at times, positively warm weather. The best part of 6000 feet of climbing, a couple of days worth of calories burnt and 102 miles covered, this was definitely a day to remember. See you all soon. I hope you are OK Phil. Pictures courtesy of Jim.

Road Runs
A Cycling play in Northwich! got to be good
Loggerheads on sugar