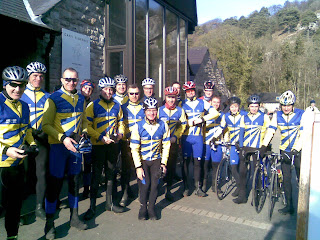 Once again a huge turnout at the club – must have been 40+ riders. I set off with the long group to Loggerheads – we didn’t get very far till Gareth punctured in Delamere Forest and the shorter group went past us, never to be seen again.

Graham led and up through Kinnerton advised us to stop at the main road (he was planning to cross it and take us on a roundabout route) but the riders at the front got into “head down” mode and went up the hill on the main road, by which time Graham decided time was ticking and we’d better get to the cafe, so we set off to Loggerheads reversing the normal return route from Llanberis, and were up the hill past the Rainbow in no time. A large group of twenty of us made it to the cafe at Loggerheads, which is very classy – their beans are “proper” beans not Heinz – but we didn’t stop long as we didn’t want to get caught out in bad light.

As you can see from the photo above the sun was shining and we had a lovely day of it but it was VERY cold and we encountered quite a bit of ice on the minor roads which Graham used to take us home, reversing his intended route from this morning, via Soughton and New Brighton.

We had a nice civilised phalanx down the hill from Kinnerton when Gareth punctured (again – your wheels are clearly too skinny Gareth!). Then things got stupid (well it was bound to happen) on the A56 out of Chester when various riders with a surfeit of testosterone decided to up the ante: those of us who’d been further back (and in my case at least with less testosterone) ended up killing ourselves to get back onto this group but we did manage it although at some cost to our legs! And so back through Delamere Forest with the normal race, I gather Ewart won and Kev came second and I was pleased with myself for hanging onto the second group with Keith and Kevin. It was good to see Elaine Kay at Hatchmere but by this time there was no sign of our run leader Graham so we hope he’s OK?

A quick word of praise for our two juniors James and Dylan who were amazing, staying in the front groups for the whole ride and taking their turn on the front. They looked like they could keep going for ever!

Kev has a new Garmin so here are the basic facts (for Kev at least, I didn’t work as hard as him!): 78 miles, 3196 ft elevation gain, 17.1 mph average speed, 4.31 hours moving time, av. temp 33.5F, and the best bit – calories 2739!!! Now that last piece of information is a reason to go cycling isn’t it! Mind you I presumably have to halve that as I spent the whole ride hanging onto other people’s wheels and hiding from the wind – but even then I now feel I can treat myself to one of those nice apple cream turnovers in Tesco’s! Posted by Eleanor