Armwarmers or not armwarmers, that was the question faced on Sunday morning as it was bright and sunny but with a definite nip in the air first thing. No armwarmers for me.

Bruce, Carol, Colin Walsh, Colin Wood, Craig, Mark, Paul, Stu, Tony and me set off for Loggerheads at a very civilised pace all staying together just like a proper cub-run.

We went the regular route out through the forest, Crocky Trail and Chester. Craig doing his usual magicians disappearing act at Chester. Just before getting to Kinnerton Carol turned off as well, having to get home as she was taking part in a strange triathlon, the other 2 parts being football and then swim. We soon had the glories of the Treuddyn climb with some finding their own pace up and Mark gamely shielding a small group from the wind all the way to the top.

After re-grouping we swung down to meet the main road but for a change turned left towards Ruthin veering off to the right near the bottom of the descent and from there to the old Bwlch. This is one of those climbs that never gets any easier, particularly if you are Tony and you break a cleat at the bottom of it. Interestingly, Tony carries spare cleats with him as he breaks them regularly!? I was the first to crawl to the top of the climb with Stu breathing down my neck.

Down to Loggerheads and the Caffi Florence (apparently named after a grandparent of the owner) was not it’s usual efficient self but we were lucky, they ran out of bread soon after we were all served with the requisite toast and beans / egg / cheese (or if you are fancy, a fruit salad complete with fanned fruits). 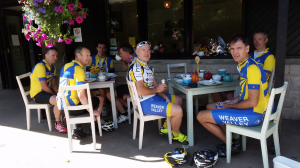 Sitting outside, chatting in the late summer sun was lovely and all the better when Stu made the stop longer by discovering a puncture as we were about to get going again.

Setting off, I decided we would take a short cut; instead of going straight up the Rainbow we turned right out of the café and immediately right and from there down the quiet lanes and up the short climb to Cilcain. A short descent followed before again the lane rose and we headed up the much longer and steeper hill to Pantymwyn. From there it was only a couple of miles before the lane joined the Rainbow climb halfway up. I know everyone was delighted about this new shortcut.

Stu had to get back home, as later in the day he was flying away for a mini, micro break somewhere hot and it would not have been good form to turn up to the plane late. This being the case, instead of going to Two Mills for a 2nd stop we took the quick route home past a witches house with red apples and via Kinnerton, Chester (not stopping at the river for an ice cream!) and straight down the A54 where Paul, Colin Wood and Bruce went their own ways. Before the grind through the forest Tony peeled off in order to go and hunt rabbits, leaving Stu to give us the mother of all lead outs for the Hatchmere sprint which was taken by Mark.

A brilliant, challenging day on the bike, great company and in warm sunshine with very little wind.

My daughter has just learnt to ride a bike and so as soon as I got in, me, Kate and Paula went out for a bike ride meaning I finished the day with 98 miles on the clock and just under 5000 feet of climbing.