Juniors ride to AJs – thanks Claire for the report 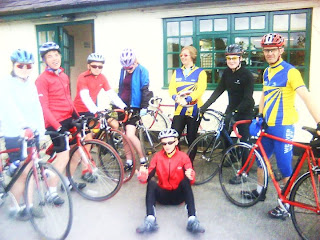 There were 11 riders, including 6 children, in this group today – Dave, Caroline and Connor Fearon, Claire, Robert and Elinor O’Brien, Derek and Claire Heine, Steven Shields, and also Dylan and Phil Sharrock. After the heavy rain the day before, it was a relief to have some sunny weather, even if it was accompanied by some strong, gusty wind at times. We headed for ‘AJs’ at Henbury through Davenham, Withington Green and Siddington. Dave has taken up the challenge to find routes that I haven’t done before, and so we found ourselves off-road again on a trail that cut a corner off Booth Bend Lane. It really was a lovely route past Jodrell Bank and Redes Mere, along some of my favourite roads. Lunch was a lively affair on the children’s table! Then we took a stretch of road to Vardentown that I hadn’t taken before, and then followed a picturesque road at Windmill Wood that Robert and I had ridden on the Jodrell Bank Cyclosportive. The road from Alderley Edge through Mobberley to Ashley was interesting but slightly marred by some bad driving, with fast cars overtaking very closely. We had a welcome stop at Tatton for an ice-cream, and the sun came out from behind the clouds to provide a real bank holiday atmosphere. At Knutsford, Connor suffered a puncture, and some of the riders elected to cycle slowly to Great Budworth leaving the main group to catch up. I was with the group that opted for another ice-cream at Great Budworth before finishing the ride at 50 miles. We didn’t see the faster group until the end, but I gather that they cycled 55 miles, detouring through Neumanns Flash and Marbury. There was a tumble in each of the groups, probably because the children were getting a bit tired by now, although nothing worthy of a prize at the Christmas Dinner, thank goodness! Everyone finished tired, but happy with their achievement! Thank you Dave for leading us on another enjoyable kids run! (Special mention should go to Dylan, who cycled to and from Winsford in addition to the club run, and who was still fresh as a daisy!)
Road Runs
Delamere 5 June
Pickmere TLI