We had not yet left the club car park.

You should understand that riders were not sprinting away, rather that Carol wanted to stamp her authority on the ride from the off. Clever thinking.

Derek’s compact and bijou run had already departed for Holt when our our rather larger assembly shivered away from the 1 degree starting temperature. Among the runners and riders this week were the aforementioned Carol, Eleanor, Laura, Louise, Kev, Jim, Mark, Jules, Geoff, Steve M, Dan, Ewart and Me. Andy Wood did not come out.

Jim had promised a hilly ride to Tilly’s and so it proved. A refreshingly new route too; a couple of times I thought I knew where we would be going and then, nope. Somewhere else. Keeps things interesting that way, good work Jim.

So it was that our soon to be dirty dozen were instantly going up the wake up call that is Soot Hill, past the Anderton Boat lift before hanging a left and taking mostly quiet and ice-free lanes towards Preston Brook. Calls of, ‘half a rev’, came from time to time and not always from Carol but in general we were a well behaved and chatty group.

Talking of quiet lanes, these are the ones that are frequented by tractors, tractors that get crazily covered in the brown stuff at the best of times and then leave the brown stuff all over the lanes. Now, if you have Clubguards (TM) everyone around you stays fresh and clean, not like they have just ridden Strade Bianche. I was very pleased that Louise has adapted what looks like an old coke bottle which does an excellent job, Laura has flaps that are pleasingly long and are reflective (nice touch) and Carol assured me that her Raw Flaps will be on display next week. It must be said though that several people that should know better are still not in the ‘Be Kind to Your Clubmate’ club. No names, I live in hope though.

Did I go off on one? Sorry.

Preston Brook lead to Frodsham and the first test of the day; Fluin Lane followed immediately by Bellemonte Road. A couple of sensible people missed out the latter test, the rest of us ground along the up to 17% incline in varying states of distress (all apart from the clever people at the front that had cheated by training, yes, i’m looking at you!). Unusually we went down Manley Road and right at the bottom, turning away from Frodsham before taking another right and going up the draggy Hillfoot Lane. As usual there were riders spread out along the length of the hill and there was a good regrouping at the top before the inevitable downhill.

The weather was so lovely by now I decided to take my cape off and it was definitely past elevenses so time for a nibble too. Everyone set off as I was taking my cape off and getting a banana out. I dropped the banana and couldn’t get my cape in my pocket but in the wrestle I dropped a gel on the floor also. Time was ticking away, gel and cape stuffed down the front of my jersey and banana between my teeth and I set off down what turned out to be a narrow and slippery lane so no time to take hands from bars. All the way down the hill with an enormous banana-yellow smile. ‘Hhrarow’, I shouted to the passing pedestrians.

Eventually catching up with the group and on to a better road I scoffed the banana and checked the gel and cape were still there. A slight up hill and down again took us towards Manley Common. We all know what is coming next, the rolling roads towards Kelsall before the kick up taking in the Yeld. Ah, the joy. There was an inevitable regrouping prior to the descent to Kelsall and up again, via Waste Lane before arriving at the top of Chapel Lane.

‘We are going up Chapel Lane’, Jim said, obviously not fully au fait with the concept of up and down.

‘But we are at the top of Chapel Lane already Jim’, we said.

‘Ahhaa’, Jim replied before explaining we would be taking a long, extended detour down and around the hill which would take us perfectly to the bottom of Chapel Lane.

‘Genius!’, we cried, and set off like lambs to the slaughter.

A rolling road and many, many minutes later we arrived at the bottom of the hill we had already been at the top of just so we could get to the top. A struggle and a grunt and a moan saw us arriving in dribs and drabs and in various states of distress. Fun this cycling lark.

Jim quietly set off, unveiling his next master stroke; back up The Yeld from the other side and towards Manley Common again before taking a sharp left towards Kelsall. We dutifully followed and lo and behold there was the bottom of Chapel Lane again. Just a bluff this time though, we were so disappointed! We rode past, heading instead for Clotton and Huxley before getting to the road at the top of the Shady Oak. Jules and Matt peeled off at this point, heading for home as they could not cope with the blistering pace.

The rest of us, the hard-core lot, carried on up towards Beeston where we had the customary regrouping.

‘It’s all downhill from here to the cafe’, Jim declared.

‘Well, downhill apart from the down bits that are on an incline’.

That was settled then and so we meandered our way to Tillys. Rest at last.

Tillys is a great cafe. One of the best. Fast, friendly service, good prices, excellent food and a lovely atmosphere. A little like Central Perk I think. Starring Eleanor as Phoebe, Louise as Monica, Laura as Rachel and Carol as Ursula. 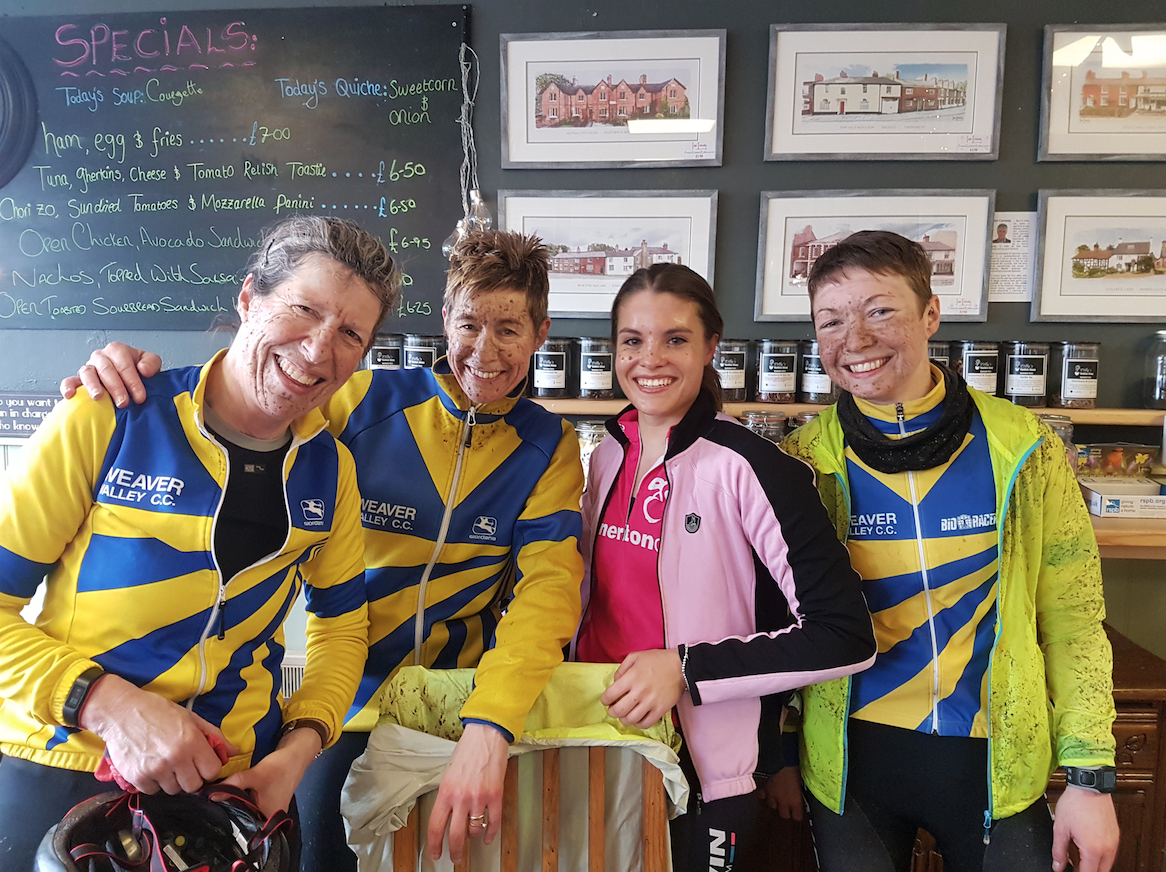 Anyway we got in to the cafe and it was quite busy, Jim headed for the biggest available table which was quickly and fully populated by our guys but leaving a couple of people having to find another table, me and Ewart. The ladies headed for their own table to talk about plaiting hair, their favourite Angel Delight flavour and other girl things (I did notice though that as soon as they sat down they all got straight in to their drugs). The guys were talking about manly guy stuff and me and Ewart had an in-depth and wide-ranging discussion covering everything from the delicacies of the North Korean power balance to the question of just how much Greek Extra Virgin Olive oil is just that and just how much it is tainted by lesser oils. How the time flew. 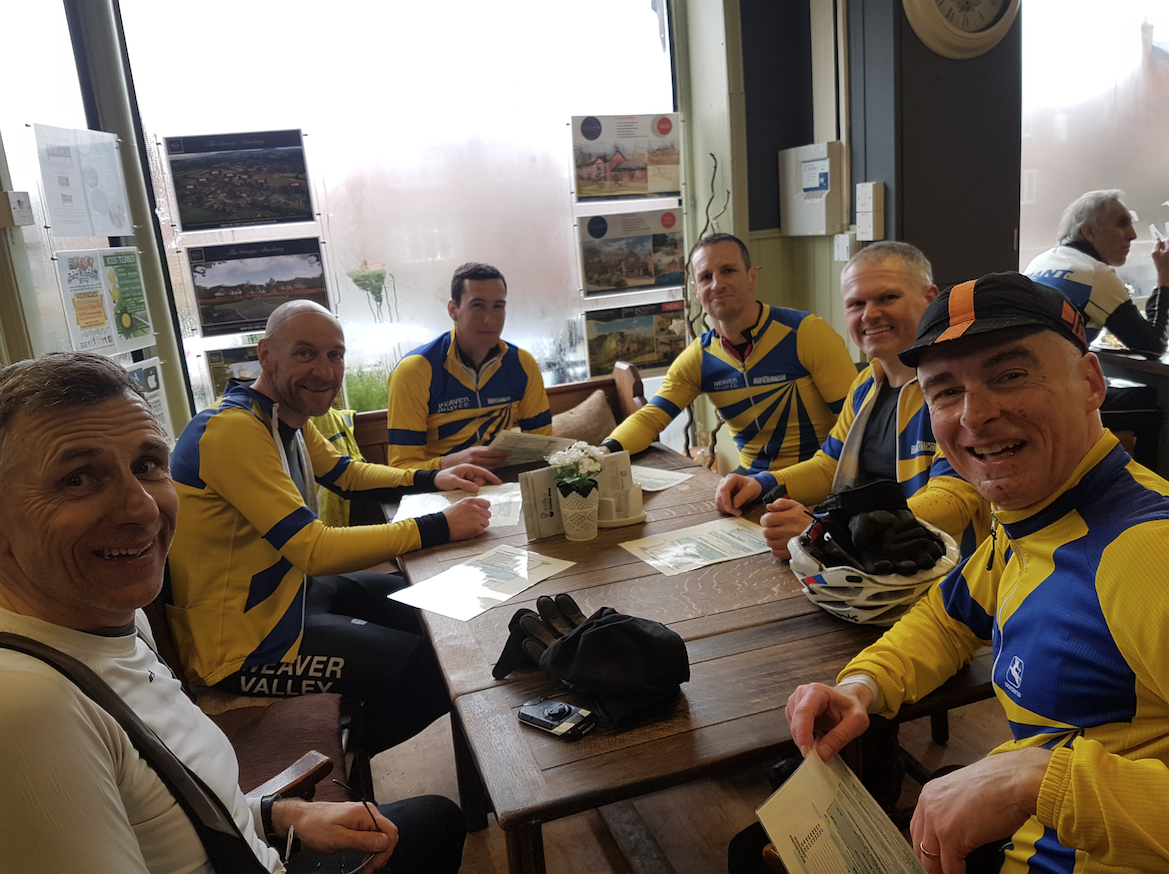 The girls were still looking at their menus and ordering when the nice waitress brought my order. My coke glass was wet on the outside and as I picked it up it slipped from my hand, soaking me from the waist down. As I was rubbing myself off, Laura said, ‘I’ve just seen your beans!’, so, inspired, she too ordered cheese on beans on toast as well. 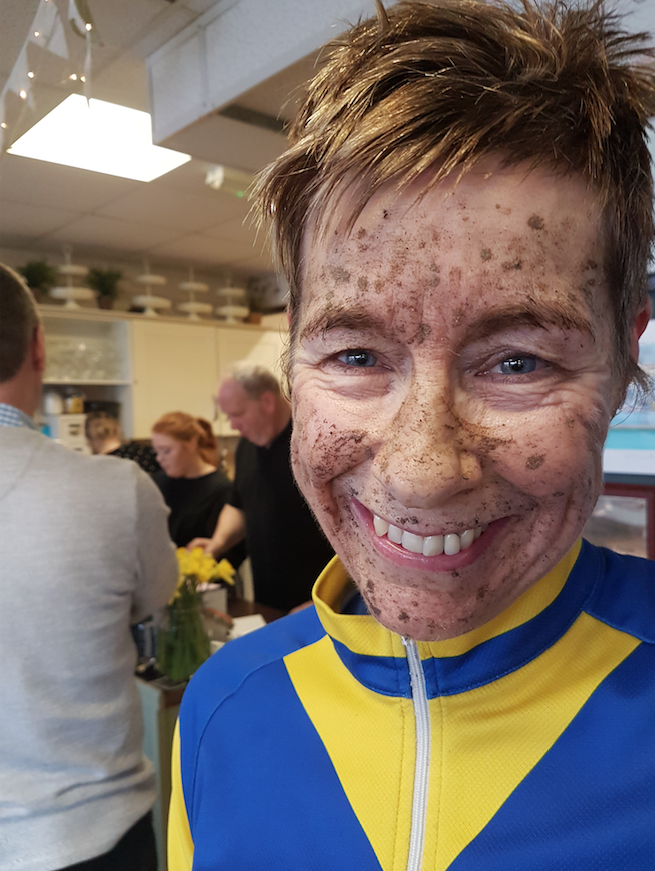 Carol has not quite got the hang of putting make-up on.

Lunch despatched I visited the little boys room and on returning I found there had been a discussion about which way home we would be going. Jim, Geoff and Mark were heading for some extra hills and they bet I would go with them. For once in my life though I took the sensible decision and went the direct and flatter route home with the majority.

Our reduced group set off at a very reasonable pace. Luckily I was on the front at this point as Kev has no sense of direction whatsoever. He was OK once we got back to The Shady Oak but I had to hold his hand up till then. It was only about 15 miles from the café back to the club and in spite of many tired legs we all kept together well along the usual route through Eaton and Whitegate. Down the lanes Carol, under her breath was quietly intoning to herself, ‘half a rev, half a rev’, Steve was chugging like a reliable diesel, Dan was wondering when he should get off his bike and run, Eleanor, having had a heavy week of cross training was soaking up the pain, Kev was wondering where we were, Louise was smiling as usual, Ewart as usual was just a little off the back, not wanting to be too closely associated with such a motley crew, Laura’s legs were quietly sobbing and wondering what they had done to deserve this and my faulty knee was starting to be rather bothersome.

So it was we came to the rolling road up from Whitegate. I sat on the front, setting a very polite and inclusive pace but then from nowhere Kev jumped past followed by Steve, Dan and Laura. Kev, Dan and Steve went off in to the distance with Steve jumping Kev for the sprint. I sat on Laura and let her drag me up the hill before coming around her at the top of the last rise.

Rolling down through Hartford and in to Northwich we all said our goodbyes and I lumbered my way home, about 70 miles covered with 4,000 feet of climbing, the temperature now a positively balmy 4 degrees. An excellent day as always with a disparate group of much loved friends.