It’s not all about the cake.. sometimes it’s about the ice cream too..

The weekend weather forecast just seemed to improve as the week progressed, and Sunday morning saw it only slightly overcast, but a pleasant temperature and little wind. The Wild Wales posse were already on their way as the few that were left met at the club.

There weren’t many there, but what we lacked in numbers, we made up for in enthusiasm!

We’d advertised today as a beginner’s run, so we had 4 new riders turn up on the day, and as that made only 12 with the 8 club members, we just had the one ride for the day, possibly to Netts, maybe the Mills.

Off we set on a normal route heading towards Delamere, and up Norley lane, just to stretch beginner legs. Cheshire isn’t flat, and you can’t really get out of the Northwich area without pedalling up an incline.

The new riders did well though, especially our youngest rider on the day – Owen, who was there with his dad for his first foray on the road, having been mountain biking previously with us. He shot up Norley Lane like a man on a mission.

I chose a road route out, and we headed towards Mickle Trafford, then off right into Dee Road/The Street and onto the quiet Salter’s Lane. It was getting quite warm now, with a good level of humidity, so a healthy bit of exertion was required up the few small hills that we encountered.

This we tempered by ensuring that the ‘chat-factor’ was adhered to. This basically means that when leading a ride out, you listen to the riders behind, and if they stop chatting, you are going too fast, as they haven’t got he breath the cycle and talk at the same time!

We were then onto the gated path near the railway lane, taking turns to open and shut the gates as we passed, and encountering a few people who also held gates open for us. A nice gesture that makes the day even more friendly for those with us for the first time.

Into Capenhurst, I decided that our favourite cafe (well mine anyway) was to be the destination, so we headed to the Eureka, which was relatively quiet for such a nice day (probably because half of the clubs were on the Wild Wales Challenge).

Alan wasn’t out with us today, so unfortunately I had to take up the responsibility of a suitable confection.

This was the beast that I chose. Al will be proud I’m sure. A big piece of chocolate cake, with chocolate filling, white chocolate topping, and a Masterchef like chocolate zig zag for it to sit on. 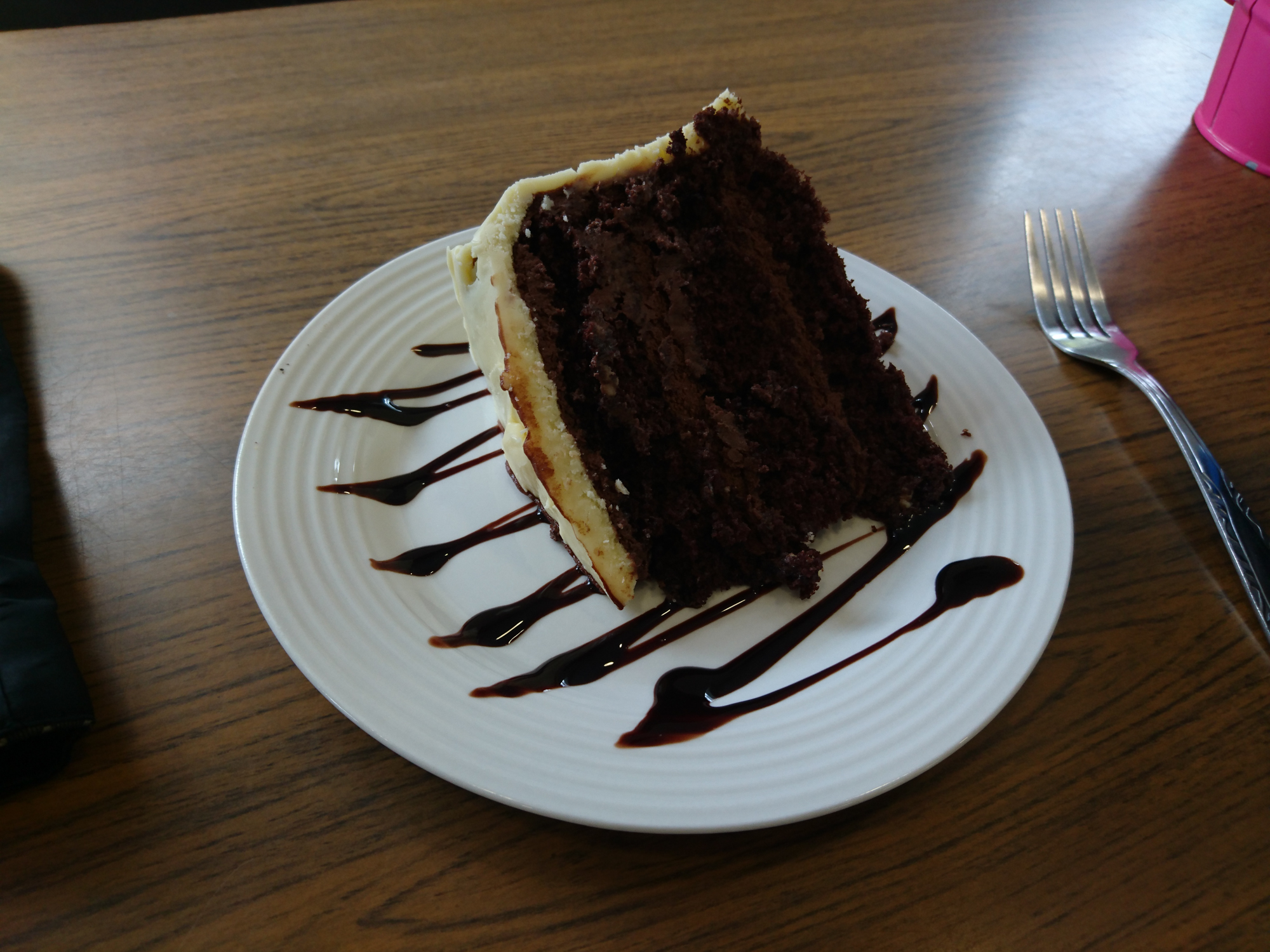 Well fuelled by plenty of food, we exited and grabbed a quick group shot, before heading off down the Greenway back towards Mickle Trafford, then back towards Aston via Morley Lane/Norton’s Lane. 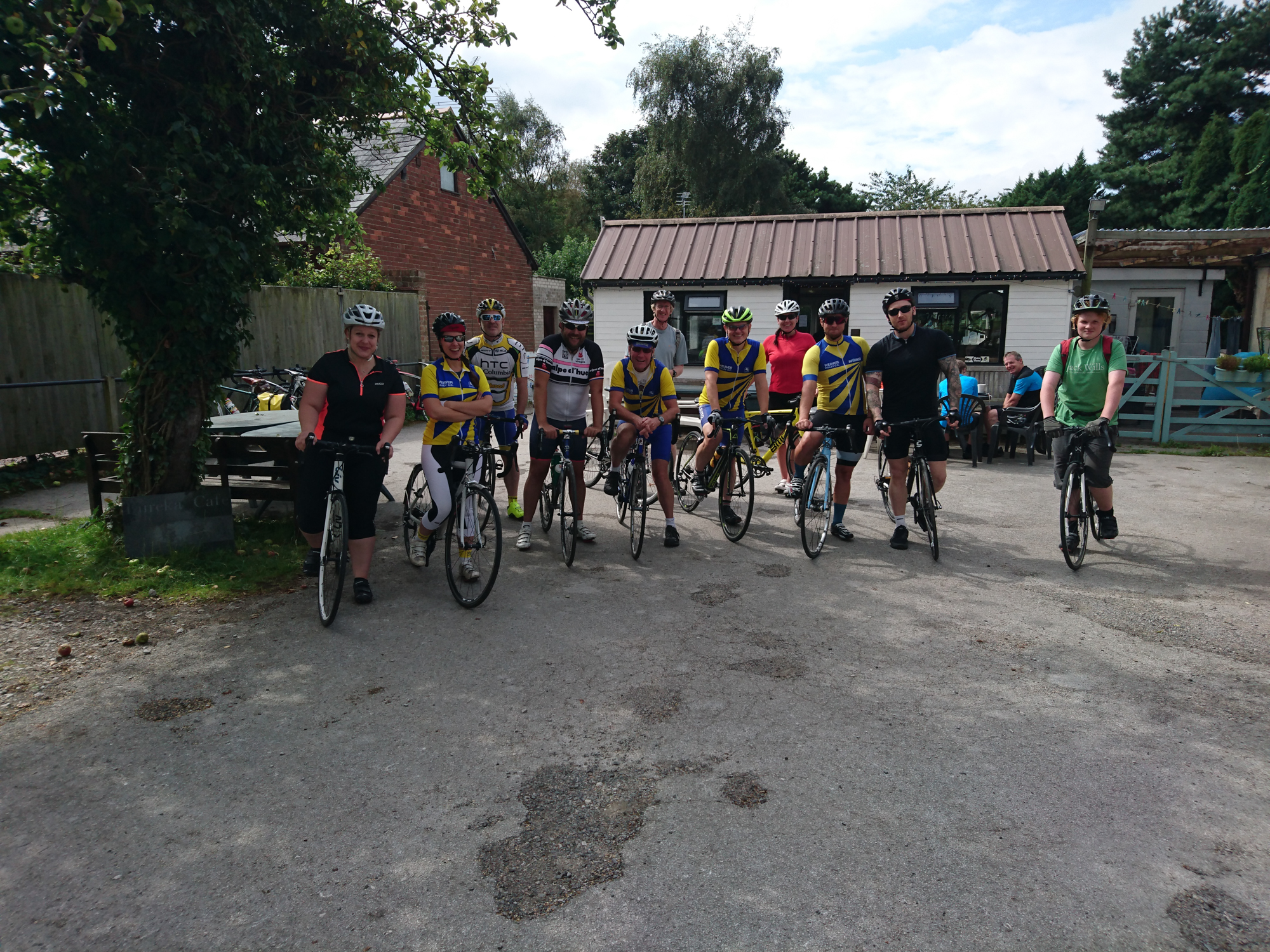 The group. Ready for the off.

At the end of Norton’s Lane, whilst having a well deserved breather, Andy suggested that we should perhaps stop in Delamere for an ice cream, if the van was there at the car park where the Sandstone Trail crosses Delamere Road.

This was met with universal approval, and a renewed vigour from all. We set off and continued until we hit the destination, now anticipating and hoping that the van was indeed there.

It was, we jumped off and purchased. Being quite hungry on the day, I opted for an obscenely massive ice cream, and when asked what I’d like on my double-coned dairy desert, rather than pick and choose, I said ‘the lot’. Which the vendor duly provided me with. Gratuitous photos of ice cream follows… 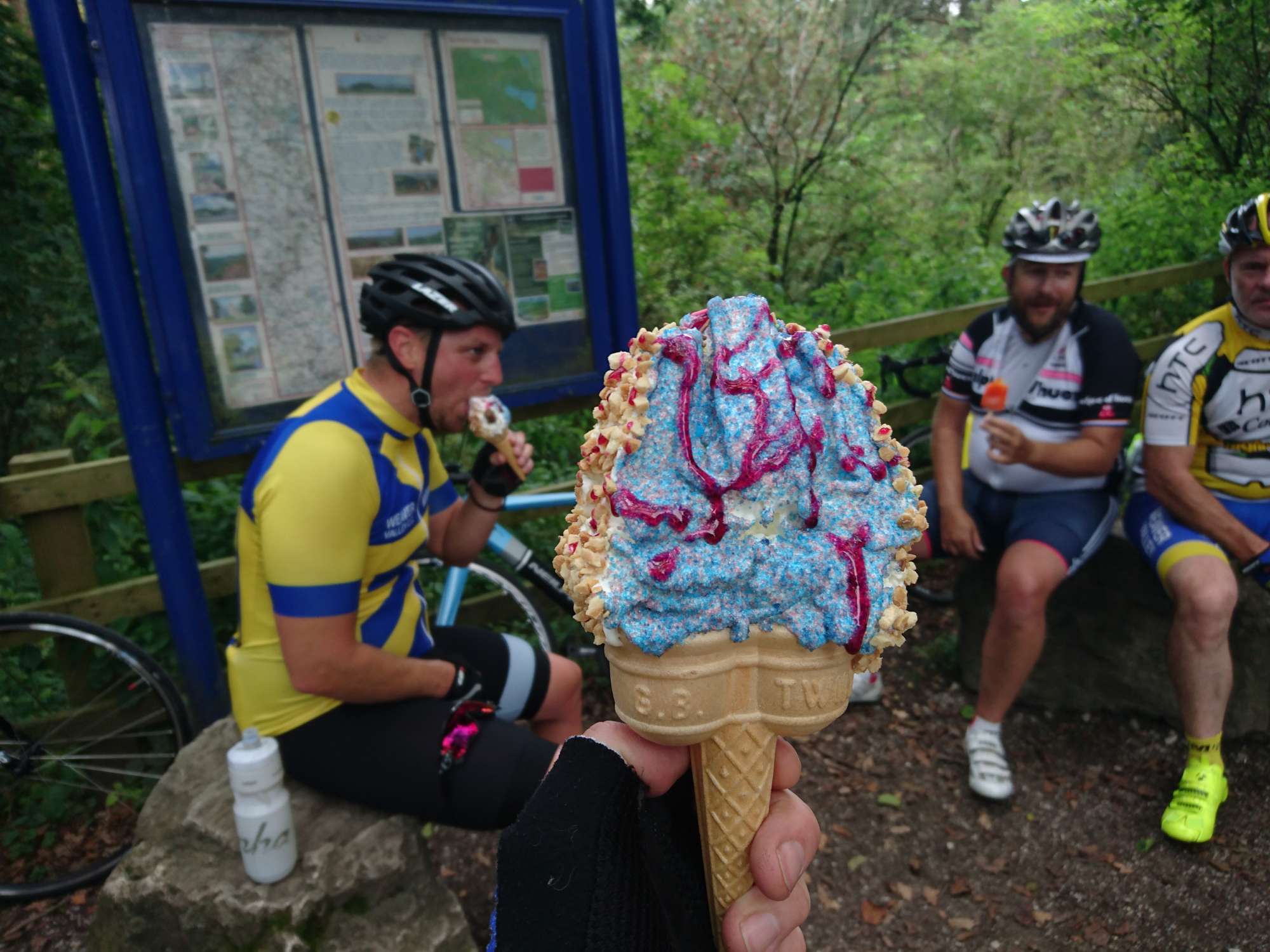 Side 1, sherbert and other stuff, and strwberry sticky stuff 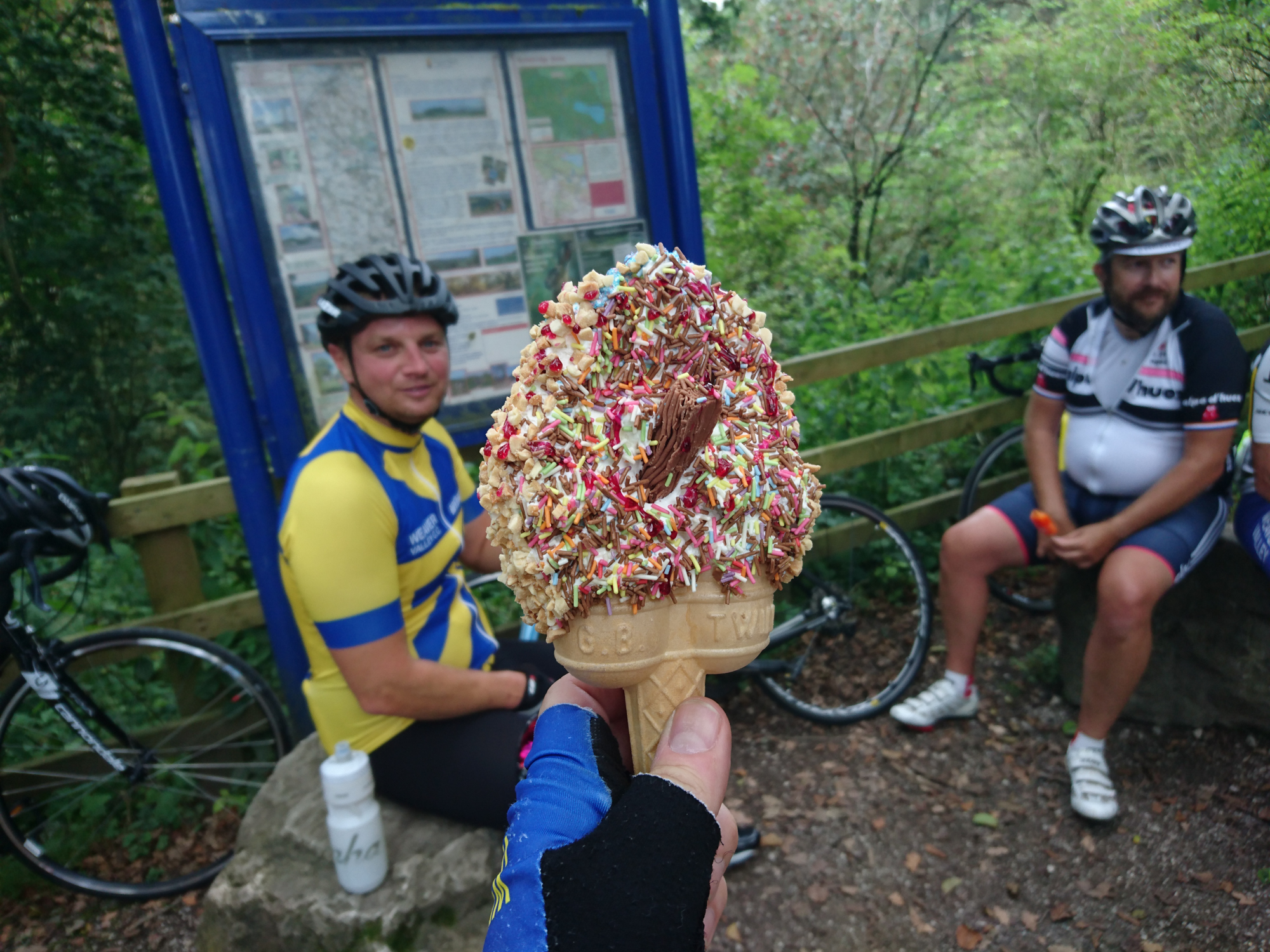 Side 2. everything else. Can you see Matt’s face of sheer jealousy? 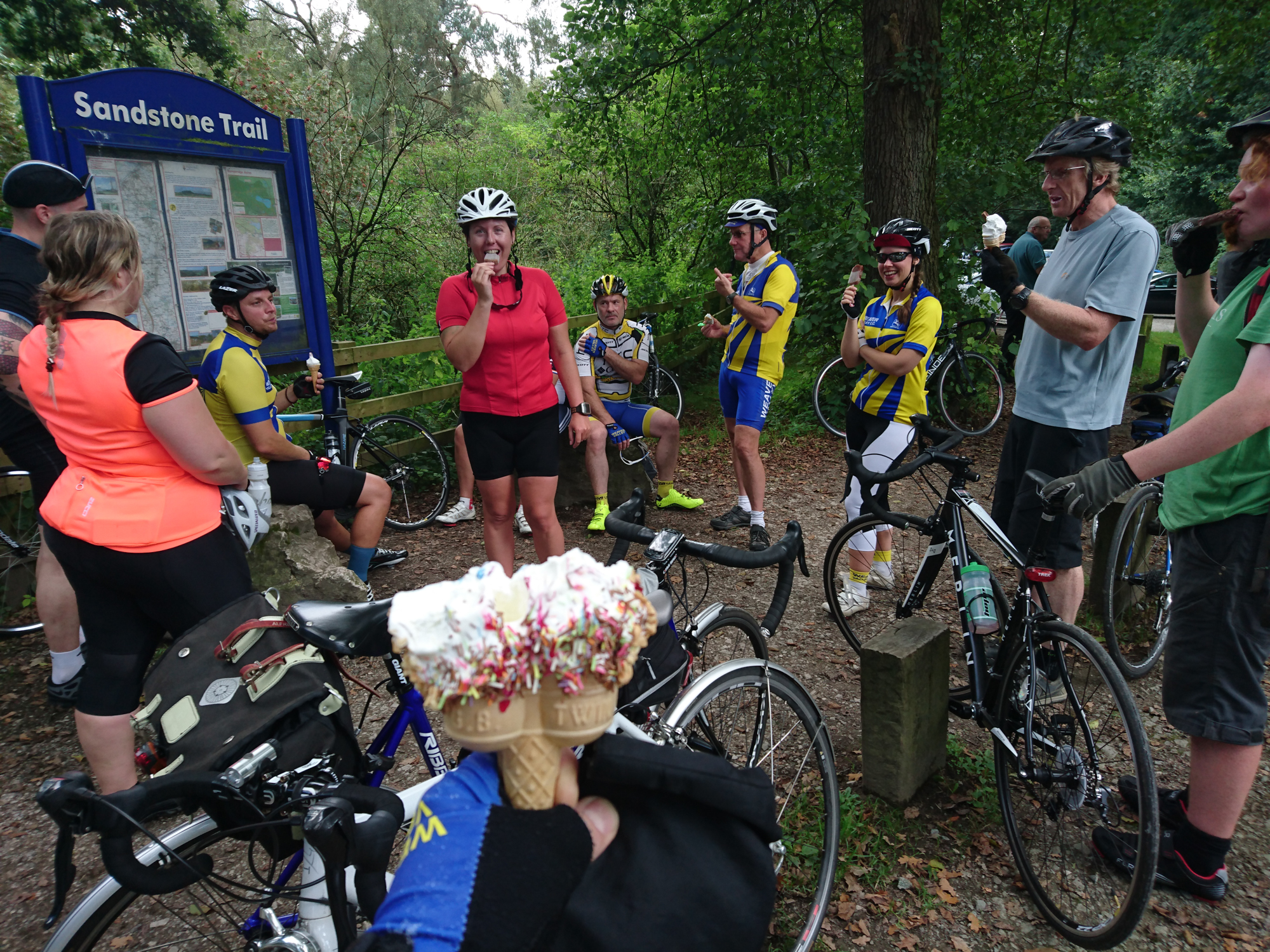 All stuffed, we then pedalled the easy route back to the club. A good day out, with shouts of approval for a two-stop club run…

For the new riders – it doesn’t happen every week!