In search of Peter Sagan

Inspired by the Boddington’s canal advert and 60s tv series White Horses, we decided to visit the (now triple) world champion’s home country and set off to do a small tour of Slovenia, putting off the hilly bit by starting from Venice.

The bikes arrived safely in their cardboard boxes, courtesy of Easyjet and the unperturbable owner/chef/chauffeur/maitre d’ of our first night’s accommodation (Sì, certamente, it may not look like it, but those two 6-foot long boxes will definitely fit behind the van seats). We had booked transport from the airport to the hotel, where I could reassemble the bikes in the garden rather than the airport, and the boxes would be stored for our return.

After piecing together a wiggly route along quiet roads and riverside cycle paths east from Mestre we set off (it always takes longer the first day) towards the Veneto coast, glimpsing some of the hundreds of islands and lots of exotic birds in the hazy distance, winding past lagoons, through small villages and a couple of large industrial towns, and with several off-piste excursions we eventually reached our next destination. In places the cycle route was fantastic: 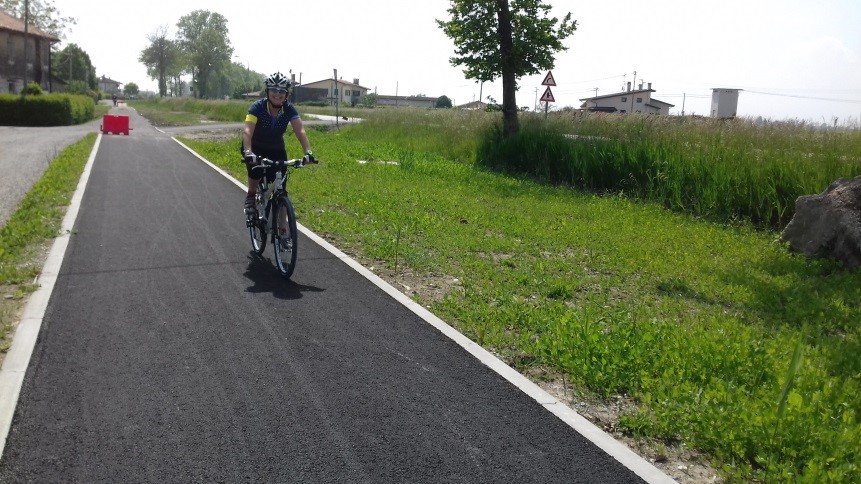 but much of the time it was non-existent, so we were forced to run the gauntlet of high speed drivers who consider texting while seeing how close they can pass without actually knocking you off as validation of their motoring prowess. Which surprised us for such a strong cycling nation. We validated our cycling prowess by staying upright rather than taking to the ditch.

As evening approached we were able to pick up the pace through Torviscosa, where the vast former chemical factory seemed to extend for miles along straight, almost deserted streets. 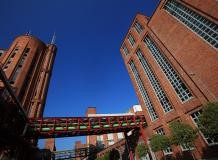 We could then hop onto the Alpe Adria route at Cervignano del Friuli and saunter down a disused railway line towards the coast, arriving in Aquileia in time for dinner. Aquileia’s inhabitants number around 3,000 these days whereas in Roman times there were over 100,000, so there are more monuments than we could do justice to after breakfast – after a tour of the cathedral admiring its 4th century mosaic floor we continued eastwards.

Having picked up a more detailed map we had the option of riding on quieter roads and meandered through hamlets and wetland bird reserves, crossed many bridges and reached Monfalcone, a lively shipbuilding port on the Gulf of Trieste, for lunch. Looming ahead was the escarpment which descends abruptly from the limestone Karst Plateau, with Trieste subject to the infamous bora wind which we were hoping to avoid. Luckily for us it’s more common in winter. Undaunted we slogged upwards and crossed the border into Slovenia after the kind of long swooping descent that generates a smile. The topographical transition was abrupt, from flatlands to the rolling wild flower meadows which were so typical for much of our trip. We threaded through valleys with vineyards on either side, riding along smoother, quiet and undulating roads. 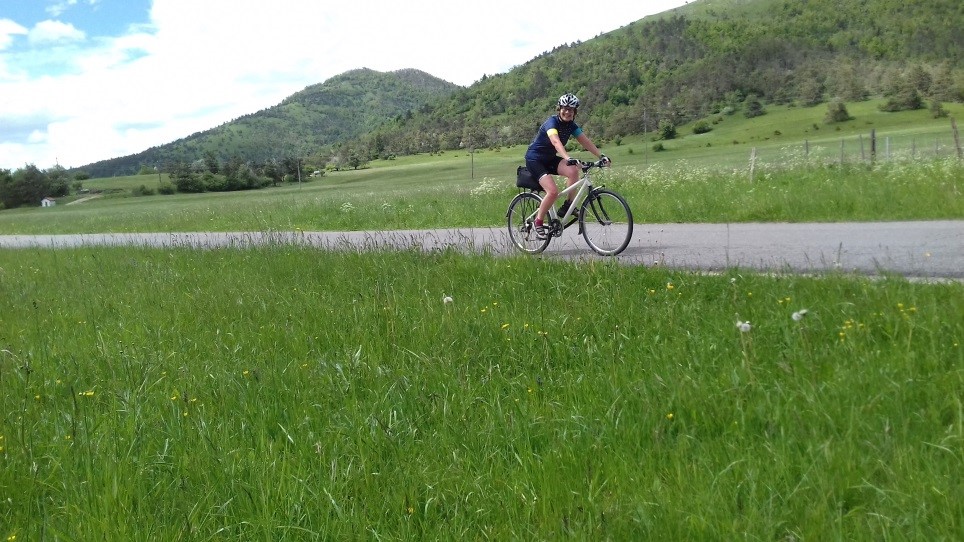 By teatime we had reached Lipica, home of the Lipizzaner stud farm which is a dream destination for any fan of the tv series White Horses, because you can walk down avenues of lime trees to watch around 300 white horses running back to the paddocks after a day at pasture. Two nights’ stay here allowed us a day trip out (riding without panniers for a treat) to visit the impressive limestone caves and gorges at Škocjan before returning to Lipica for the dressage performance. 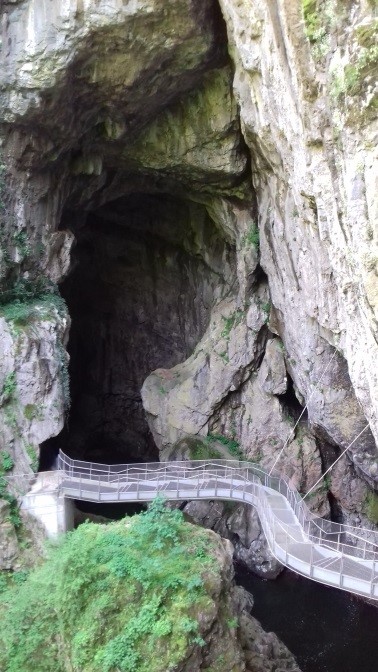 The following day we headed north east towards the capital, stopping along the way to admire the castle nestled in an 8km-long cave at Predjama. The temperatures were not as balmy as (Ann had) hoped so we were glad that the café served the local speciality which we had discovered to be ideal cycling sustenance; beef soup with pasta. More of a stock than a soup, but very tasty and served with bread for just a few euros. Plenty of change for another hot chocolate, then. 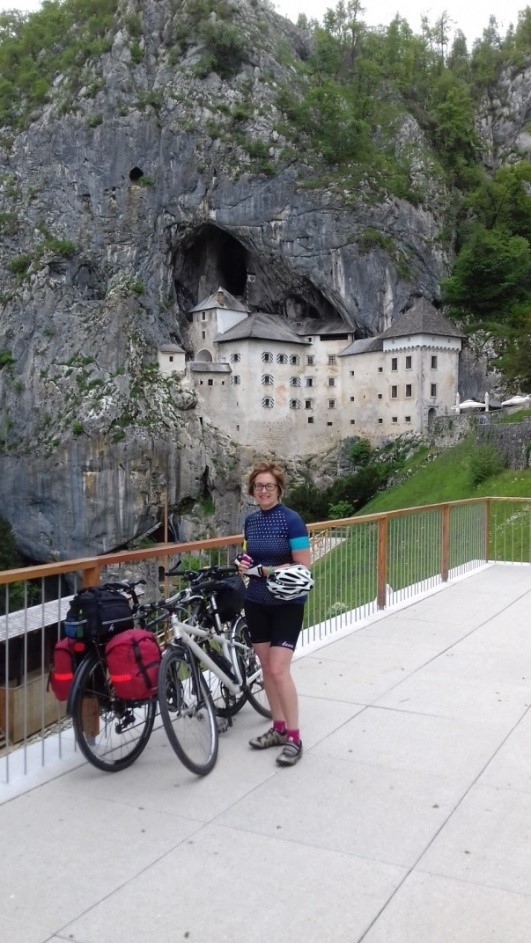 Having crested then traversed the hilly, forested ridge we continued along flat valley floors bejewelled with an abundance of spring flowers, until Logatec where we hopped onto the main road, which appeared to be the only way over the next ridge, a bit like going over the Bwlch to Ruthin. Sure enough, a young man in a loose t-shirt came haring past on the descent, providing a back wheel all the way to Vrhnika. Mindful of regaining our cycle tourist credibility we obtained an off-road map of a circuitous route through reclaimed marshland to the picturesque and diminutive capital city, Ljubljana, which turned out to be encircled by a greenway alongside a river. We passed a pleasant half an hour or so going with the flow of the local people before turning off onto a wide tree-lined boulevard leading into the centre, where we’d booked an apartment with secure garage and washing machine, and an affable host. We walked a bit further along the leafy banks of the river into the pedestrianised heart of the city, overlooked by its medieval hilltop castle, for a very pleasant evening and dinner.

The city is situated at the confluence of three rivers, one of which flows there from the Julian Alps where Slovenia borders Austria and Italy, which was the reason we’d chosen to visit in May rather than September: there would be attractive snowy bits on the tops. From Ljubljana we headed north west to Bled, which with its emerald-green lake, picture-postcard church on an islet, medieval castle clinging to a rocky cliff and some of the highest peaks in the Julian Alps as backdrops, is a bit like the English Lakes with sunshine. 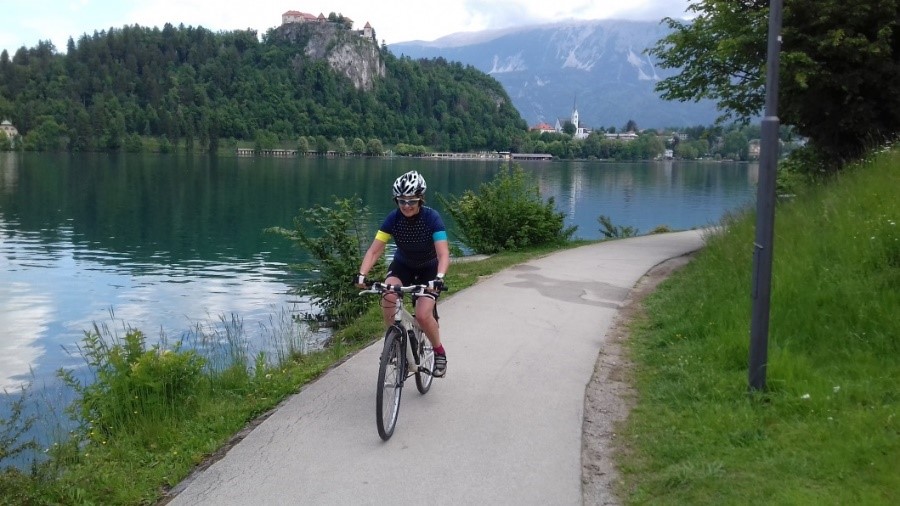 The lakeside cyclepath led us onto some beautiful quiet roads, 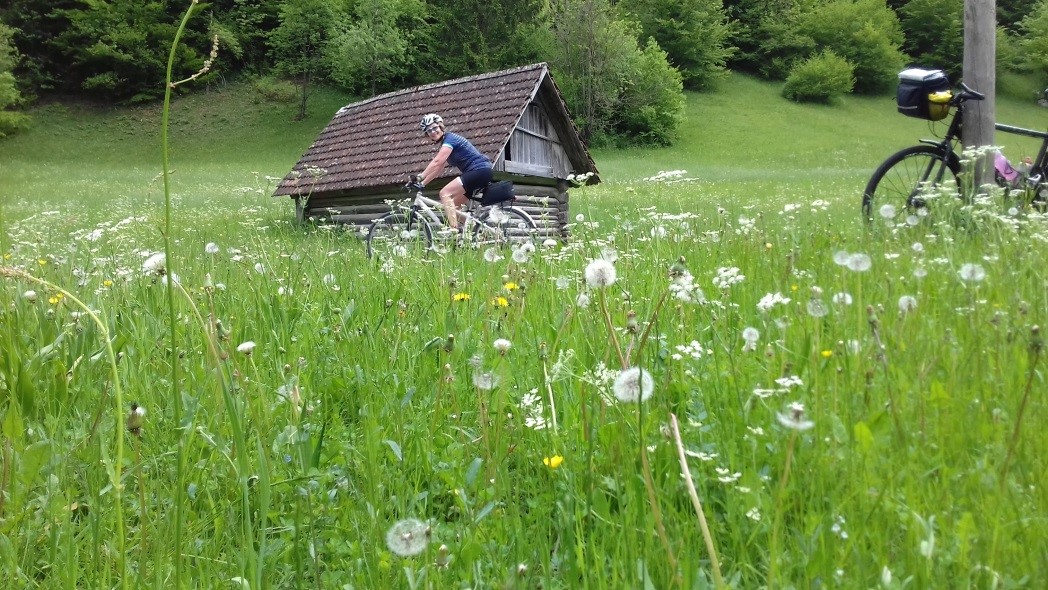 then over the hills towards the Julian Alps, which still had a good covering of snow. 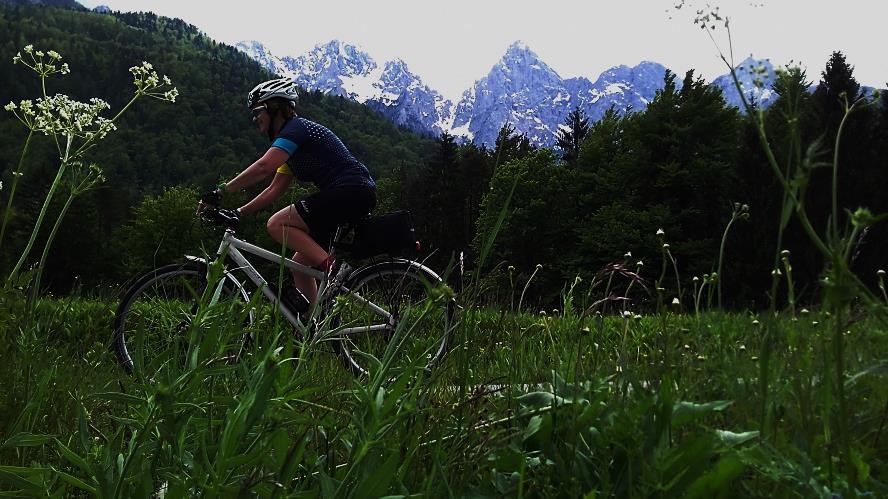 We stayed at a superb hotel in Kranjska Gora where, typical of the friendliness we encountered throughout, the young receptionist insisted on carrying Ann’s bike down a steep flight of steps to secure it in the garage on the street below. We went for a wander round and happened on the local history museum, which closed at 6pm. It was 5.55 so we asked if we could have a quick peep inside. An hour into a fascinating tour we were relieved to learn that the enthusiastic guide, who spoke very little English (Ann understood her Slovenian better) had not missed her bus home, as it wasn’t due until 7. Infused by culture we repaired to the traditional restaurant where we dined to repletion on the hearty local cuisine of enormous sausages, sauerkraut and various delicious grilled meats. 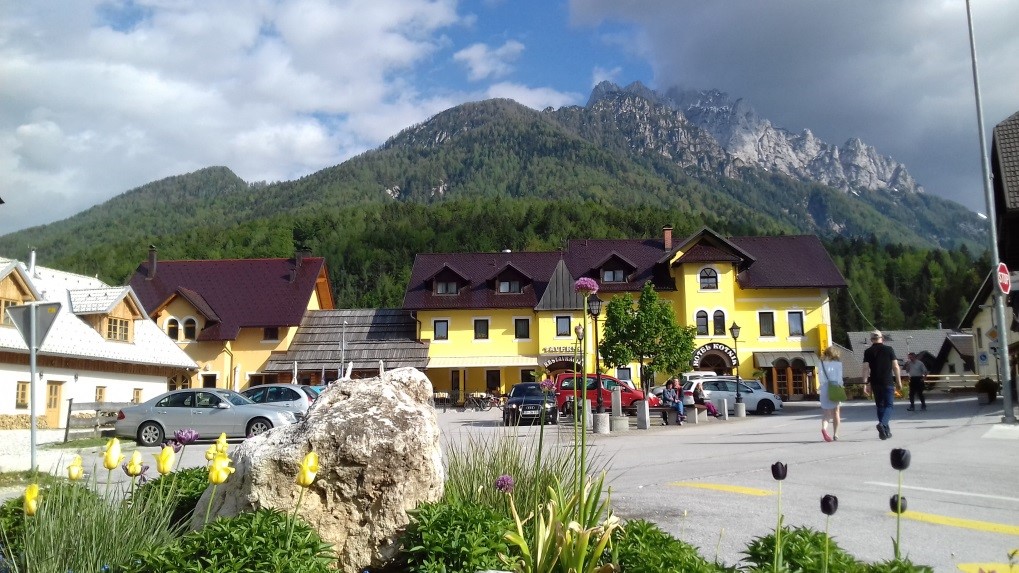 Amply refuelled we set off the next morning on the highlight (for me at least) of the trip: the Russian road heading southwest through the Vršič pass, sandwiched between the Italian border and Mount Triglav, Slovenia’s highest peak at 2863m. The road was built during the First World War by Russian prisoners of war. At 1100m we stopped to visit the wooden chapel they built in remembrance of 300 of their comrades who were killed in an avalanche during the road’s construction. All 25 hairpins on the ascent are cobbled, but fortunately the 25 on the descent to Bovec and the Soča valley are not. 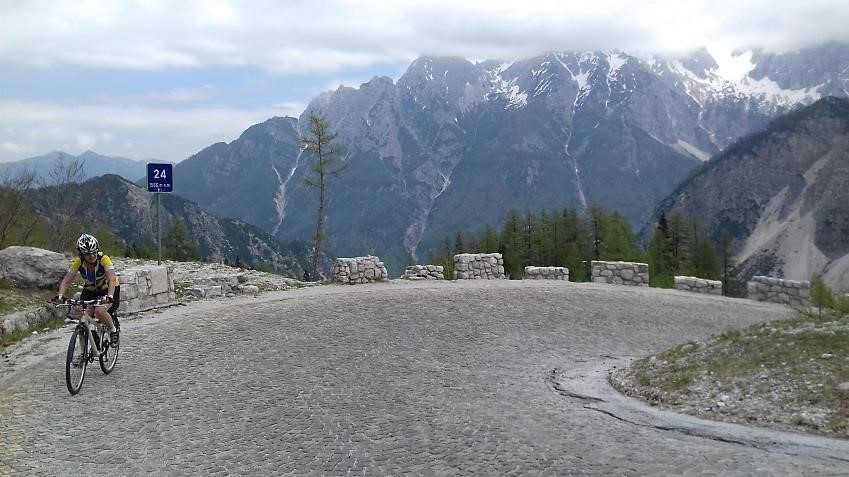 The highest we’ve cycled together: 1611m 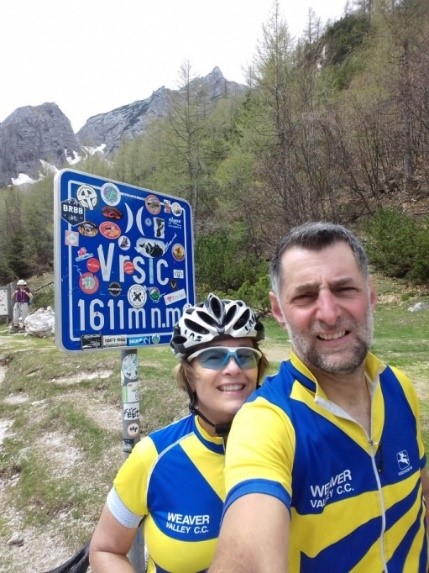 After the brilliant descent, we followed the turquoise river Soča along some great roads and even better cyclepaths. 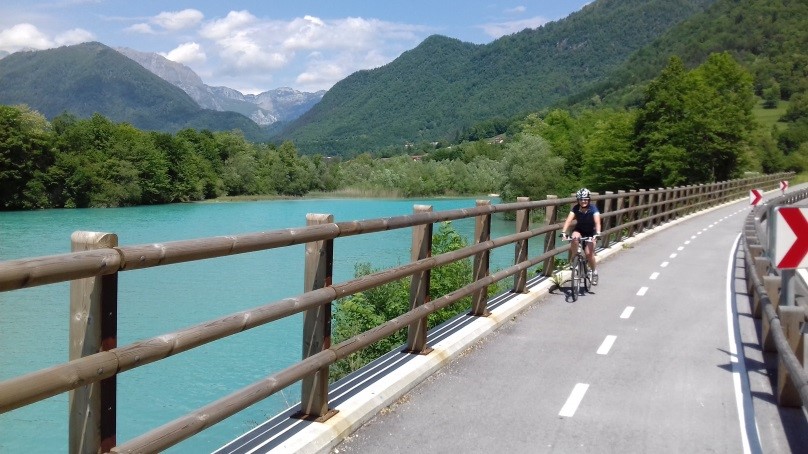 After a night at a hotel in the paragliding centre of Kobarid we carried on along the Soča valley as far as Plave where we climbed over into the Brda region, which is one of Slovenia’s wine growing regions and reminiscent of Tuscany – a total contrast to the landscape we had spent the previous week riding through. We spent our last night in Slovenia at a smart guesthouse in Kozana. As the sun went down the church bells rang out from the surrounding hilltops in a kind of acoustic relay.

We rode back to Venice through some heavy rain and witnessed a novel and popular way of staying dry: 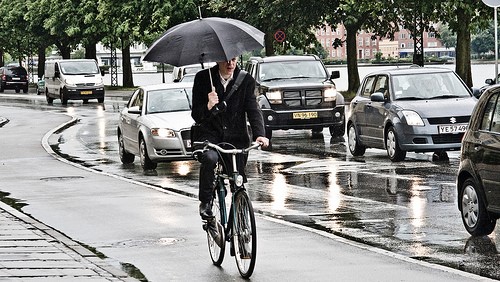 we were glad we didn’t get it in the mountains, as we had left our umbrellas at home – and descending those hairpins with only one hand on the bars doesn’t bear thinking about.

Safely back at our starting point we transformed into pedestrian-type tourists and took the bus into Venice in glorious sunshine for a couple of days.

We would certainly recommend Slovenia as a great place to visit by bike – quiet roads, varied terrain and such friendly and accommodating people. Of course we never found Peter – turns out he’s from Slovakia.