Father’s Day yesterday and we were the Fathers, King’s of the road. Who’s the Daddy? Who’s the Daddy? We were. At least that’s how we set off. By the time we returned home though the road had chewed us up and spat us out and we were vanquished like Arnold Schwarzenegger after his first day at school in Kindergarten Cop. All except Stuart that is.

The day’s proscribed destination said Tittesworth and, being keen to not repeat the same routes as previously I came up with a nice ride, not crazy. Then Jim Duffy said that the road from Wincle to Meerbrook had been resurfaced with loose chippings and so I amended the route to take all of that road out. The new route consisted of many roads that had not been ridden before, at least for many years, on a WVCC club run, full of lots of quiet, narrow lanes. And Lumps.  Many, many lumps.

Colin W, Paul G, Stuart, Mark, Craig and me set off in the early morning heat at a steady pace, very little breeze, a beautiful day. Through Davenham to Goostrey there was plenty of chatter, Craig and I having a political conversation. Hard for my tiny brain to cope with at that time of the morning. The couple of dips at Swettenham saw eager legs attacking them, not me though. I knew what was coming so took it easy. Skirting past Congleton we approached the lower slope of Mow Cop where the road was being sprayed with black chippings and black tar, all duly picked up by our tyres and shot all over our frames. Nice.

Mow Cop set the pattern for the day with Colin, Paul, Mark and Me all suffering and struggling in various degrees while Stuart (“I’ve not been doing much”) rode away gracefully. It was also the case that from this point until we got back to Redesmere many hours later we were not to see a flat piece of tarmac again.

Regrouping at the top of Mow Cop, Craig said he had done his bit for the day and needed to get home to shout at Sunday morning politics on the TV. We set off only to stop after a minute as we had no Mark. His chain had come off and jammed between the inner chainring and frame. Oily fingers and some judicious shoving and pulling released it and we were on our way. Coming off of Mow Cop we turned right, I called a halt and we turned around and went in the correct direction instead, down the hill towards and through Biddulph.

Up and down hills past Biddulph and then over Rudyard Lake we continued, always the same pattern, struggling riders and Stuart powering up, not breathing. I had drained both of my bottles by this point, in contrast, Stuart had allowed himself tiny sips amounting to a half an eggcup full.

The car parks at Tittesworth were heaving and I thought there would be a line of people, in fact barbeques were much in evidence and the cafe was pretty quiet so orders were take and we were served really quickly. Food eaten, photo taken and we were away in about 35 minutes, not before we had refilled bottles though. 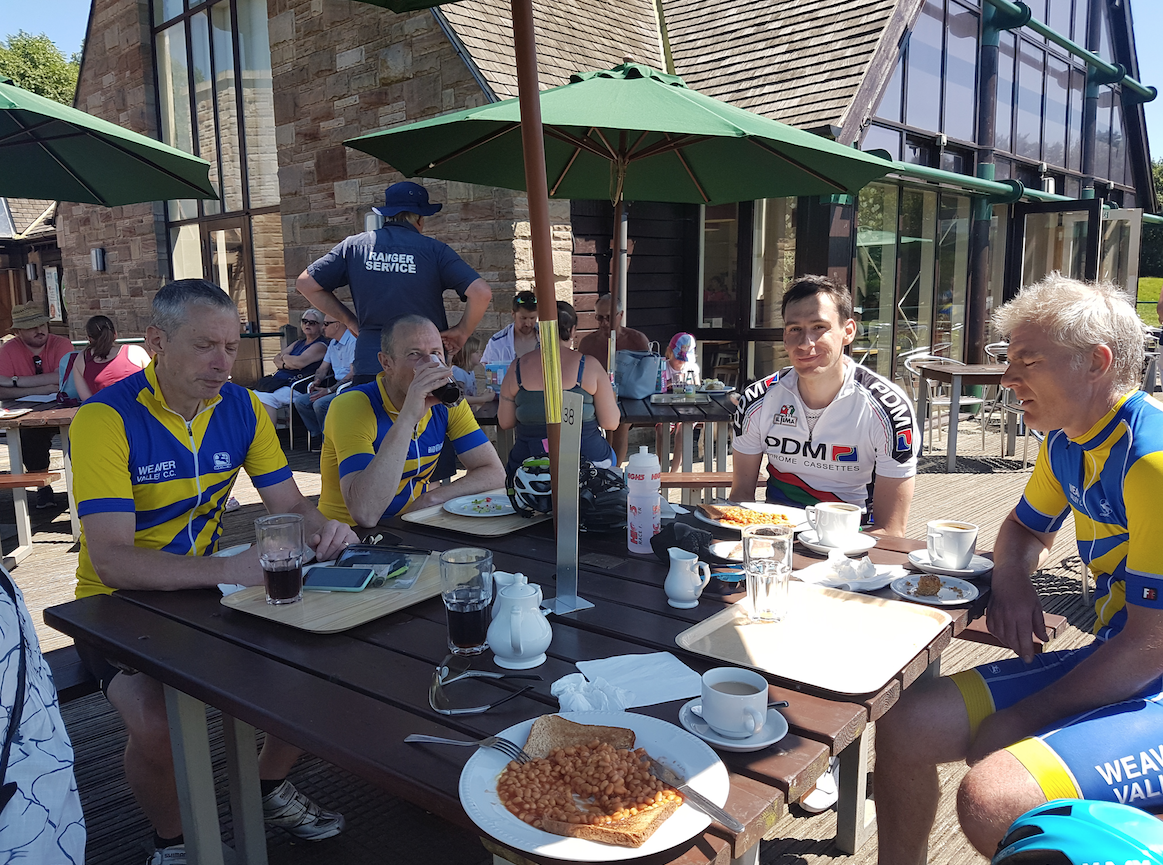 Instead of going up Gun Hill we turned right at the pub to climb the Roaches, about 600 feet of climbing in just a couple of miles up narrow, quiet lanes. Walkers and pic-nickers at the side of the road looking at us like we were crazy people, Stuart romping away. The Roaches represent a great challenge both up or down and i’m looking forward to a return visit. The road goes on to meet the lane which you normally climb from Algreave to Flash, we turned left here supposedly going downhill but it’s remarkable just how much climbing there is on the downhill.

We resisted the temptations of the Eagle and Child and climbed up past Blaze Farm, regrouping at the lane a mile or so past the cafe. Down this steep descent was a sketchy affair as the extremes of light and shade meant you couldn’t spot the potholes until they were upon you. Into the Wildboarclough Valley and waiting to regroup. No Mark. Give it a couple of minutes. Paul said he was with us just a couple of hundred yards away where there were some sheep on the road. I climbed up there. No Mark. Returned to the group. Another couple of minutes of waiting and Stuart went looking for him. Stuart came back. No Mark. We were more than a little concerned by this point so all 4 of us set off, Paul and Stuart in one direction, Colin and me in another. Colin and I climbed way up the hill, way past where the sheep were. Mark at last. Relief. By this time I had him after an incident with a pothole, in a crumpled heap at the side of the road. In fact his chain had jammed again and he had taken his front mech off to effect a repair. The 3 of us set the mech up again before rolling down the hill to the others.

Along the valley road we took a left turn and climbed up towards the Macclesfield forest road. Into Macclesfield forest and the descent here again is a tricky one, mottled shade, deep potholes and sudden cars filling the lane. Past the reservoirs and we saw Alan Kemp coming the other way. Quick wave and he was gone.

Into Langley and a swift right turn up Coalpit Lane to Teggs Nose. This is a great hill, steep, narrow, a great challenge. As usual we all battled up in a personal hell, sweat dripping from legs as well as arms by this point. All of us except Stuart that is who crested the hill like Julie Andrews at the start of the Sound of Music.

From Teggs Nose we went down and up and down again, past Walker Barn, past Rainow and on to the main road to Chapel en le Frith. My bottles had been empty for some time now and up the long drag to Blaze Hill, the cramp which had been pinging on and off for some time came in hard. I know Mark was cramping by now too. Not pleasant at all.

In my route I included a descent of Blaze Hill as I hadn’t been down it before and thought it would be fun, unfortunately we were held up by a couple of cars so couldn’t take full advantage.

In to Bollington and we found an open shop. Bottles refilled all around, cans of coke, red bull and more supped thirstily. I think Stuart picked his bottle up and looked at it and that was enough for him.

Setting off again we quickly stopped again, waiting for Mark who had lost his saddlebag. Some days it’s just your turn for mechanicals!

Through Prestbury and towards Alderley Edge, my cramps coming and going. I thought I had drank enough in Bollington to solve the problem, obviously not. Now came my little sting in the tale, Swiss Hill. Colin had guessed but it was news to others… Unfortunately 50 yards up the hill cramp hit my left leg and from my glutes all the way down to and including my toes everything contracted solidly. The pain was bizarre, unbelievable, I unclipped and stood in the road moaning loudly and not in a good way. Funnily enough when I rejoined my club-mates there was not a lot of sympathy for me. Strange.

Up the Wizard, down Birtles Lane and to Redesmere. Stuart and I were talking about the fact that aircraft weigh themselves and wondering how long it would be before cyclists could use this as a marginal gain. Stuart also confessed to drinking nearly half a bottle and the fact he considered using his lowest gear at one point. But didn’t.

The roads all flat now, no wind to speak of and turns were taken on the front to drive things along as we all had Father’s Day lunches/dinners/suppers to get back for. Paul was the first to turn off and then in Davenham Colin and Stuart peeled off. I rode with Mark back to Hartford before the final plod for home.

A really hard day, made all the harder by the weather. With hindsight we should have stopped for fluid more often. Lesson learnt. I got through 6 bottles, 2 teas, 3 cokes and a red bull and I still spent the last hour with no fluid. A day we will be talking about for many years I am sure.

Written by John the Baptist. At least i think that’s what they called me…