Dodleston was where the short run was to head, and by golly we were to be navigated there for the first Al navigated run of this year.

We set off at a nice steady pace, and wandered up towards Norley, then on through Ashton Hayes, Waverton, before taking a minor detour across the A51 along a nice road, to a dead end. Very pretty though. Anyway, we then retraced our steps through Chester and out to Dodleston. All feeling hungry by now, we exited left to the track to the Chester Lakes, only to be told by a bloke in a van that it was closed. Clearly too early for fishing, so I guess there is little demand.

No matter, Al took it in his stride and we set back from whence we came, and hung a left at the roundabout to trip to the fine eating establishment at Morrisons in Saltney.

Derek was delighted. The seasoned Audaxer heartily recommended the ‘Little Breakfast’, having sampled it on many an occasion.

I couldn’t refuse this gastronomic delight, so ordered one as well. It was just the job, like having beans on toast and spare, with sausage, egg and bacon to boot. Spot on. 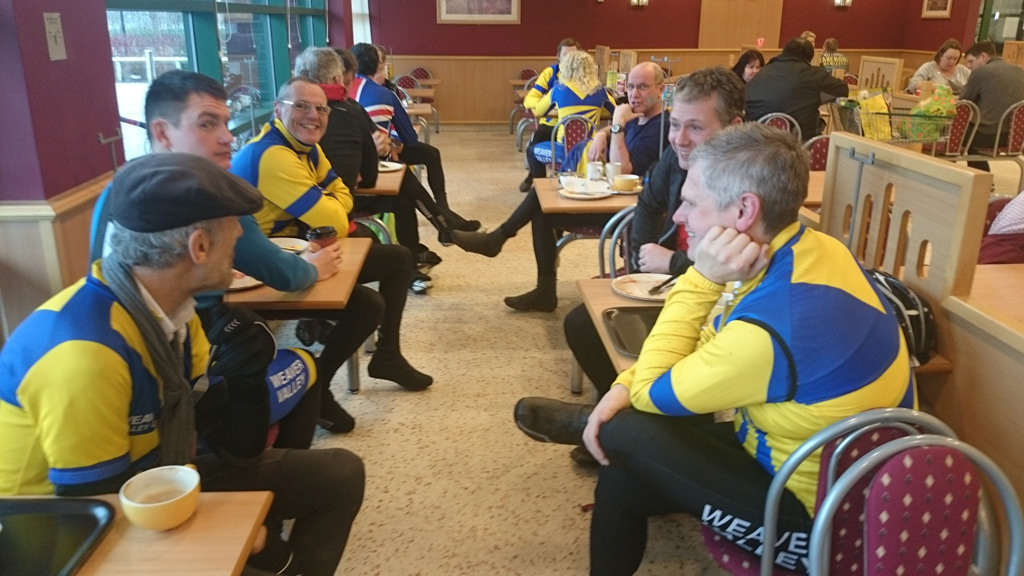 Suitably refreshed, we set out onto the road again and headed out and then back to the Saltney Ferry bridge, where cheekily we were met by Jed who had taken a known shortcut and had caught us up.

Cutting along and through Blacon we joined the Greenway and back to the main road to head for Delamere. Here I turned off, so cannot report on the Delamere sprint…

I have noted that Eleanor was missing female company, but sorry El, Heather has defected to the short run for the time being…. 🙂

A good run, and well navigated by Mr SIlver again.