Llandegla in the snow.

So, my inaugural jaunt as the MTB secretary. At this juncture I’ll just say a massive thanks to Nick for doing this for all the past years, I love mountain biking, and the rides he’s organised have been a huge part of that.

My plan for an early than usual start option were a bit scuppered as we turned up to find the gates still shut and the cafe staff lobbing grit down onto the access road. To compound the issue, Kevan had arrived at the head of the queue in the new Sports Hearse ™ all rear wheel driven, low profile tyre’d and powerful engined, he wasn’t convinced that anyone would be getting past the front gate that day! In the event, that caused no consternation, so he decided to run over Eleanor’s toe in it instead.

At about 9.20, Kev, Eleanor, Iain and myself set off up the drag to the top of the centre, Iain and myself for a quick batter of the blue route to get back for anyone rocking up at the more traditional 10.00 start and Kev and Eleanor headed for the red as their playtime was curtailed by work in the afternoon.

After picking up Geoff back at the cafe, (and a brew, be rude not too, but avoid the MASSIVE cakes so early in the morning) it was back off to the top of the trails again to start the back trail.

Despite some little slippy sections and a bloke getting very irate after getting knocked off by a dog, (actually his dog!) the second part of the day was pretty uneventful. The dusting of snow meant that speeds were down a bit, or at least mine were. Didn’t seem to bother Iain, the Flying Scotsman or Geoff, (to labour the metaphor) the Mallard. After more brews, with cake this time, we all went our separate ways home. 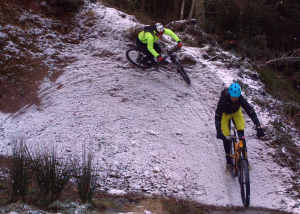 Next MTB session will be on 7th February in the forest, usual time, usual place. Sure there’s something else I’m doing that day too…….