The cry on social media was, ‘9.30 meet to get to Ruthin in preparation for the looming Llanberis’. Jim, Jules, Phil, Iain, Stuart, Kevin, Geoff and me arrived at the appointed hour in the refreshing 3 degree temperature. A discussion followed about the heavy snow and poor conditions reported in north Wales. A quick vote was taken and we decided that, in search of better conditions, eastward bound to Tittesworth we would be. Kevin was quickly and completely disoriented having never knowingly travelled further east than Hartford and as the day progressed he had to be constantly assured we were still in the same country and all was well.

After 10 miles i went down a pothole that was so big that my front wheel entered another dimension. Puncture repaired we carried on, everyone except me taking their turn on the front, my legs wondering just what it was i thought i was playing at.

Out through Congleton and the snow started, it was to keep snowing on and off for the next several hours (please see sentence 3 above). It should be noted that although the conditions were wet and dirty we all stayed pretty clean thanks to proper mudguards and flaps. Ahh, the simple pleasure of a good pair of flaps.

Up the hill out of Congleton and the group strung out with me mostly out the back. Regrouping half way up we set off again and i dutifully went off the back again. I like to be consistent. Regrouping on the Leek road i stayed with my comrades for a good 100 metres before resuming my duty and sliding off into oblivion.

There is a left hand turn off the main road and down a quiet lane to Meerbrook where Stuart waited for me and we rode to the reservoir together. I have no idea what was happening up front as it was so far ahead it may as well have been in a different country. I do know what Stuart told me however which was that, bearing in mind we were originally going to Ruthin, he was intending to ride to Hatchmere and then peel off for a short day and here he was 3 hours later in a minor blizzard. Best laid plans and all that. 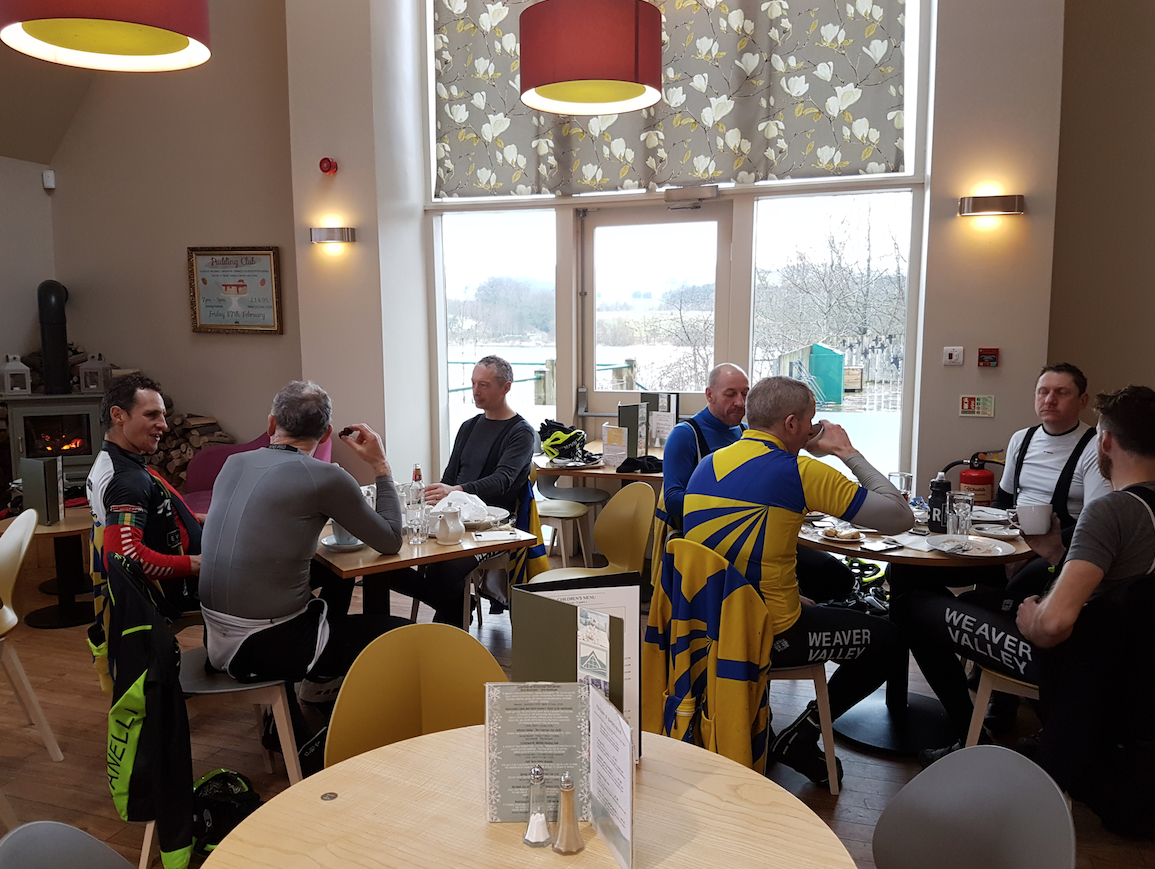 Apart from 2 other people the cafe was empty so the beans delivery was swift. We all laid our gloves and hats in front of the log burner to dry out but i noticed it was in fact a fake, a prop, a screen in a box, and it would have been better to just breath on the kit to dry it out. Anyway, we all asked Kev if he had been there before, his reply was just a look of wide-eyed wonder at the thought of visiting such an eastern land as this.

Lunch eaten, wet gloves on and we were back in to the 1 degree with gusto. Gun Hill to warm us up and kindly Kev offered to hang off the back for this part of the journey. After Gun Hill a quick descent and then the undulations taking us through Wincle and to the Four Ways crossroads, the group spread over a large distance, each of us in our own world of pain except the clever people in front. One day, one day… 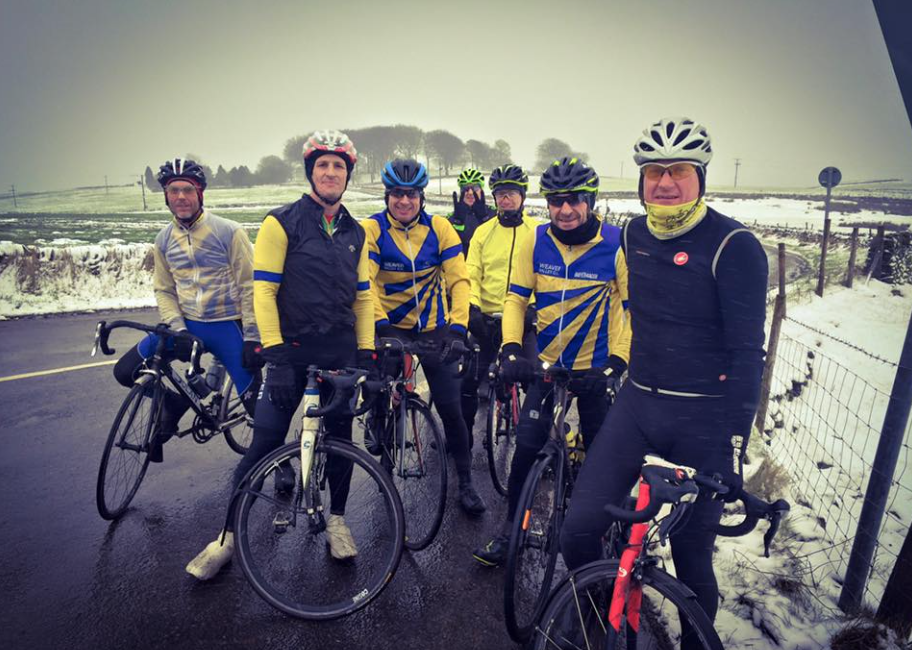 Unfortunately in view of the snowy weather we did not descend the Doonbaars (you’ll have to ask) but took the lane down the side of Macclesfield and to Gawsworth. During this descent Jim decided that, as his disc brakes work so well, he didn’t need his front brake any more and so one of the pads was duly removed and the hydraulics loosened. Anything for a challenge our Jim. It didn’t go completely to plan though as this lack of braking meant an overshoot on one bend and an unscheduled detour.

Gawsworth conquered, our tarmac ribbon took us to the old (and frankly far, far better (no bitterness at all)) downhill course. Iain dragging us along at a good pace down a road which someone had thoughtfully smothered in diesel just to add to the excitement.

The swift, downhillish, flatish ride continued all the way from there and by the time i turned off for home i had still not done a turn on the front. A first for a long time. Home before 3.00 pm, 70 miles covered which felt like double that. Great company, fab day, see you all again soon.

Road Runs
Manchester Regional Track League
A Cycling play in Northwich! got to be good