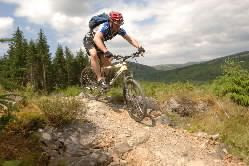 A smaller than usual group of three headed for North Wales courtesy of Andy’s van. We hit the Beast trail which is 37km of mainly singletrack with some rocky technical sections but more flowing than it used to be. It takes in 3500ft of climbing (that’s equivalent to riding up Snowdon), but that didn’t seem to bother Derek. He was having trouble holding down his new super lightweight carbon/alloy Giant bike, resulting in Andy and me grovelling to keep up on every climb. And lots of comments from other surprised groups riding at a more sedate pace.
But you are never far from another descent on this trail and here the playing field was a bit leveller with the three of us keeping fairly close together and catching a few other groups as we went. A quick tea and barra brith at the cafe mid route gave us the sustenance to climb to the highest point and then tackle the neverending descents, which have been gretatly improved, but still require 100% concentration. We finished off the trail with further refreshment at the visitors’ centre. A grand day out with blue skies for much of the time.
Beforehand, someone had the suggestion of stopping off on the way home to ride up Snowdon, but they had gone off the idea by the end of the Beast! I won’t say who’s idea it was for fear of embarrassment, and Derek and I didn’t want to make too much of the change of heart because we wanted a lift back to Northwich! Thanks for the lift Andy and welcome to the world of pain and suffering which is cycling.
Off Road
Sunday 5th April to Llandegla
Wednesday 8th April to Holt