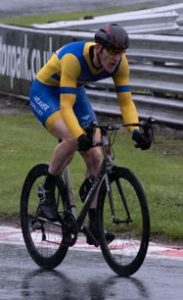 A night for the riders with waterproof skin tonight!  16 brave souls turned up and actually despite the rain it was pretty quick with several PB’s.  Winner with a 22:00 was Dave Walker but there was a gaggle of 23’s after that with a very in form Titch taking second place with a PB 23:12.  An amazing ride when you consider that he rode his first ever 100 only 3 days before, well done Titch.  Third place went to Andy Milligan also with a PB 23:15.

The cup competitions had another shake up.  Several riders have now gone over the 5 counting rides so are trying to replace earlier low scoring rounds with higher values.  Steve Thomas was complaining about his unpredictable form but in fact he now tops the Guardian Cup table so clearly needs to dust off his Lo-pro if he wants to stay ahead. Dave Curran has climbed back to the top of the Scratch Cup table but Craig is breathing down his neck and is showing his best form for years.  Time for a new skin-suit Craig as those pin holes are costing you at least 3 watts!

Only 3 rounds left so get those rides in.  See you next week.