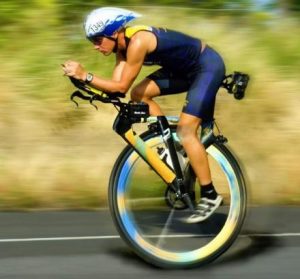 A great turn out last night with 30 signing on and then Mike Lodge promptly signing off after snapping a spoke (better luck next time Mike).  No digs from me about fair weather cyclists but significantly more riders than last week on a dry sunny evening.

I’ll cut to the chase with the results.  Dave Walker knocked out yet another cracking ride with 21:57 taking maximum points in the scratch competition from Sam Taylor in second place who stopped the clock with 22:56.  Third spot overall went to Dave Curran with a new PB of 23:39.  Overall on points after 2 rounds of the scratch competition Dave is in the lead with 48 points.  Yours truly is second equal with Craig Lee on 42 points.

The Guardian cup reshuffled after round 2. On the night Alison Morton took 25 points by improving her PB from 30:32 to 29:27. Well done Alison and keep up the great work.  Second on handicap was come back man Steve Thomas reducing his 30:35 down to 29:57 on his hack bike complete with mudguards.  It will be interesting to see if bits get removed as the season progresses and maybe at some point his TT bike will be aired.  Is this a tactical start to the season by Steve???……time will tell:)  Third on handicap was Carol Robson who is also on the comeback trail.  Her 28:53 was a 36 second improvement on her PB.  Overall after 2 rounds Alison moves into the lead with 47 points.  Second overall is Rhys Edwards with 46 points and third is Dave Curran with 41.

Still a long way to go in the competition but get those rides in early to avoid disappointment later.