A chilly and damp 1 degree this morning didn’t stop the teenage boy I saw while on the way to the club. Football shorts and a cotton tee-shirt. Not tucked in. Bonkers. I on the other hand had breathed in the morning air several times before settling on the right combination of garments.

At the club there weren’t too many takers today. As hills had previously been discussed, I myself opted for the short long run or the long short run or the long run MKII. Whichever it was, it was ably lead by Kevan who had suggested hills and a quick jaunt to Blaze Farm, but after intense, high level discussions this was altered to Algreave. During this time Bruce was discussing the fact he had little to no working gears at all on his bike. Perhaps an oversight on a hilly clubrun.

Our merry band of Kevan, Eleanor, Emily, Elaine, Louise (please change your name to something beginning with E, it is a club rule), Bruce, Paul G, Steve, Alan, Graham, Dave (?) and me set off. Ewart hung around off the back of the group for a very short while before disappearing and doing his own thing, perhaps he went on the ride to Holt?

A light sprinkling of snow was coming down which was nice, what was initially trickier was Kev’s navigation; perhaps it’s a Gloucestershire thing but apparently left means right and right means left there. It took us a couple of goes but we picked it up. We stayed as a tight group through Lach Dennis and Goostrey, a constant chatter in the air. Paul dropped off the back to cape-up in Goostrey but quickly caught up and by the time we got to Twemlow, with the snow falling quite heavily now, we all stopped to cape-up. It was also at this time that somebody beginning with E suggested (whined?) that the weather up in them there hills would perhaps be a little harsh and so let’s go to Aj’s instead. A straw poll taken and this is where we headed via Lower Withington and Siddington with Kev and various other people leading.

At Redesmere, Alan, Graham and Dave? turned off. Past the lake and up the long, long drag to AJ’s Kev, Paul and me went off the front, this being the ‘training’ part of the ride. Kev was on the front until just before a point where the rise levelled out at which time I came around him for the victory. ‘Are we waiting here for the others?’, I panted, ‘no it’s miles yet’, said Kev with thinly veiled delight. Note to oneself, make sure you sprint at the right place… And so the three of us carried on until eventually Kev lead up to the café with Paul second and me a sad third.

There was plenty of room in the café, unfortunately not a lot of temperature which forced several of us to use an old Navajo Indian trick of staying warm. Luckily no one took photos. 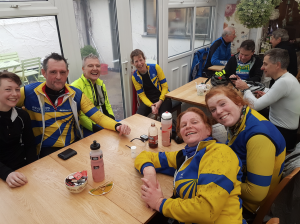 With beans, toast and other comestibles digested and tea and coffee supped, we ventured back in to the chilly although by now snowless day. Kev elected me the leader for the return leg and he stayed behind, sheep-dogging. The sheep bit being a very important part of that adjective. Up in to Macclesfield we headed. I thought it would be a good idea to put in some extra miles around an island but no one followed suit. To Prestbury and up Chelford Road; another long drag which made certain legs complain. A relatively long, relaxing, descent down Birtles lane and again a nice sharp climb before the dirty, narrow lane to Redesmere.

Properly warmed up now we rode at a moderate pace, but with ‘half-a-wheel Paul’ being constantly reigned in on our journey to Chelford, Over Peover and then Goostrey. Eleanor, Paul and I had a good discussion about the benefits of dirt and some people’s over-obsession with cleanliness. This naturally lead us on to the conclusion that cycling is the best for everything and ipso facto cyclists are the same.

People started to break off and go their own ways from the Three Greyhounds onwards until the large core group got back to Davenham and Kingsmead. Kev went off to ride up and down a hill, Paul went to put some more miles in and I went to do the same. Special mention goes to irregular rider Louise, relatively new rider Steve and One Gear Bruce who all did a cracking good job today. Stay with it. So, home, hot tea, the last of the Christmas cake and about 75 pleasant miles clocked up. An excellent day all round, thanks everyone.